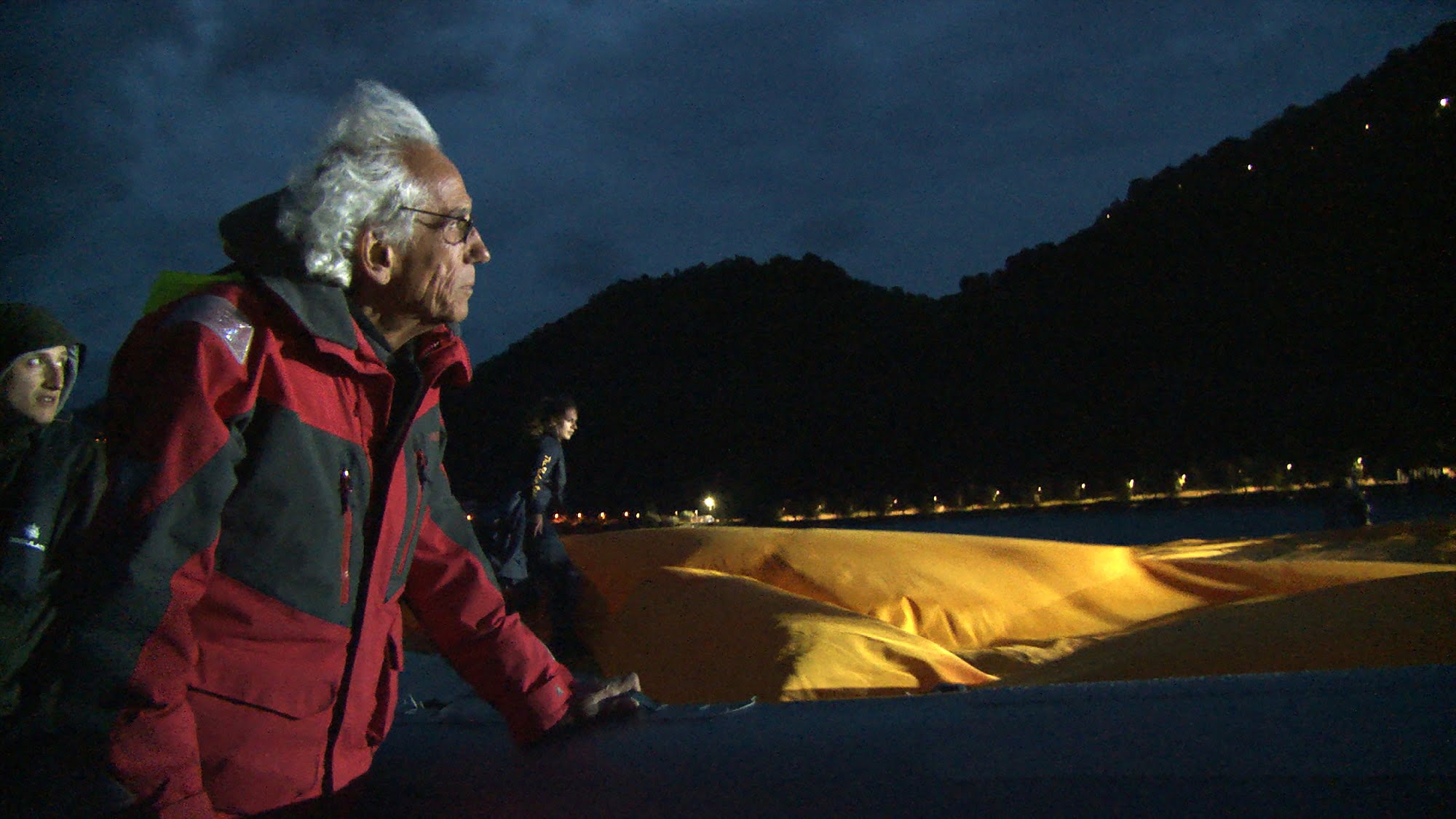 A complicated, but disarmingly amusing and sometimes thrilling look at the blurred lines between genius and hubris and art and commerce, Andrey Paounov’s documentary Walking on Water will entertain and enlighten viewers who believe the film’s core subject is a master or a fool equally. A fly-on-the-wall look at divisive, but popular mononymous octogenarian artist Christo as he prepares his first installation since the deal of his wife and partner, Jeanne-Claude, Walking on Water balances sympathy and snark towards its subject in an enlightening, effective manner.

Since the death of Jeanne-Claude in 2009, Christo has largely stayed out of the public eye, but Paounov joins the artist as he’s preparing for his first major installation since 2005. The project, known as Walking on Water, has been a white whale for Christo and his wife since the 1970s, one of dozens of ambitious ideas that were never realized in their fifty year career as partners and collaborators. Previously nixed by the Argentinian and Japanese governments, Walking on Water consists of over 220,000 interlocking plastic blocks covered with fabric (one of Christo’s favourite and most tiresome motifs) that will rest atop a large body of water, allowing patrons to walk upon it. Christo has found a new home for it on Lake Iseo, at the foot of the Alps in Northern Italy, and everything seems to be going ahead smoothly until Mother Nature and a disconnect with local government officials threaten to put the entire exhibition in jeopardy.

In the interest of full disclosure, and in case you couldn’t fully read between the lines of my introduction, I’ll be up front in admitting that I think very little of the art produced by Christo. To pardon the obvious pun, it’s all surface level material with little deeper meaning; art created for an era where the experience of going to an exhibition to be seen trumps any sort of contemplation on the part of the person taking in said experience. At one point in Walking on Water, Christo travels to a fundraising event benefiting Pope Francis’ charities in Africa, and he brings with him a hilariously shoddy work that will undoubtedly fetch hundreds of thousands of dollars, and that entire sequence as conveyed without embelishment by Paounov pretty much sums up what I think about the artist and the current state of modern art in general. Walking on Water, the exhibit, isn’t much of anything at all. It’s just people who flock to walk on a glorified, garishly yellow pier just to say they were there. As my mother would say, “Whoop-de-fucking-shit.” There’s really nothing one can get from the exhibit that someone couldn’t get from going to the beach or shoreline and using their own imaginations instead. My own biases and interpretations aside, Walking on Water, the documentary, functions brilliantly on its own merits as a great entry into the “is this actually art?” debate. 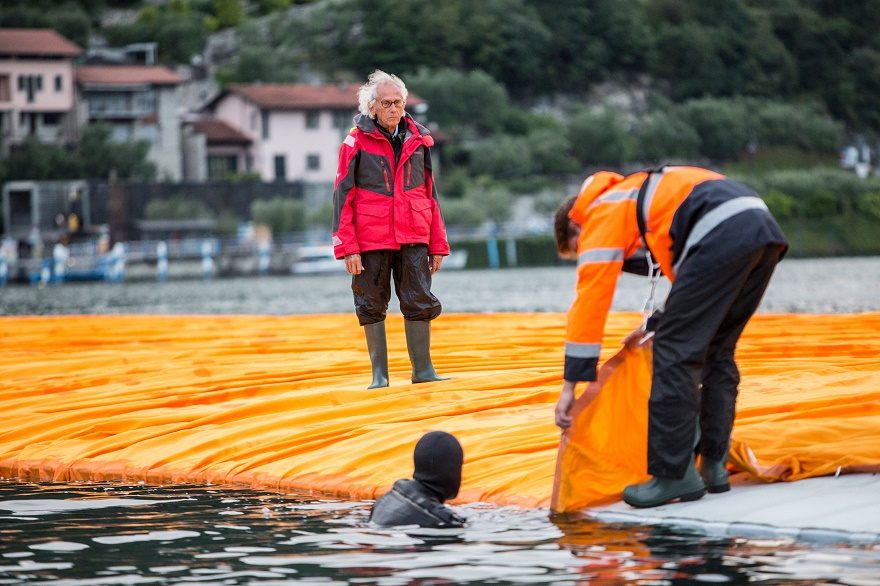 Making matters worse is the fact that Christo, much like Ai Weiwei, Banksy, and Julian Schnabel, is an artist enamoured with his own brand and brilliance. He carries himself throughout Walking on Water like the god forsaken love child of Larry David and Daniel Day Lewis. He’s obstinate to an extreme fault, making the lives of his perpetually flustered (but I’m assuming well paid) assistants a never ending hell. Walking on Water never shies away from depicting Christo as an asshole or a bit of a boob, especially during scenes where he fumbles through explaining his plans to rooms of visibly disinterested students or montages where he can’t stop spouting the same catchphrases about his latest, genius installation. There are no sit-down interviews or archival materials to skew anything; just a few title cards here and there to give some context or remind viewers of the timeline at hand. Everything positive or negative is captured for posterity here, and as such, it does offer some degree of sympathy for someone who can act rather monstrous.

Admirably, Christo’s Walking on Water is self-financed through the sale of other works, and he seems to abhor hobnobbing with the wealthy elites who purchase his art. He hasn’t taken any grant money to see the project through to completion, which means his neck is assuredly on the line financially. It’s also an undeniable passion project for him and his late wife. No one speaks that lovingly (albeit obviously rehearsed to death) about something close to them unless they’re all in on the idea. The financial risk that he’s taking with the project comes into sharp focus, not due to the inclement weather that hampers the final few days of production, but once the unexpectedly enormous number of visitors start flocking to the installation. When Walking on Water starts drawing upwards of 200,000 visitors in its first couple of days – well beyond their proposed maximum of 10,000 per day – safety concerns begin to arise.

For all of his obvious, but lovingly embraced faults, these issues are out of Christo’s hands; the result of government officials getting their palms greased by tourism groups and easy paydays for all around. At this point, Paounov’s film becomes somewhat of a thriller, as Christo and his staff scramble to contain the chaos created by overzealous art fans and financial opportunists. Say what one might about Christo as an artist, but when things spiral exponentially out of control, he makes all the right decisions and asks all of the proper questions. It’s like watching someone being jolted from a pleasant dream, only to be thrust into a nightmare. As a film, Walking on Water effortlessly transitions back and forth between the positive and the negative through the simple art of letting its subjects be themselves.

Walking on Water is more than an unencumbered look at the construction of a single exhibition by one of the world’s most well known artists. It’s an overhead view of the state of the modern art world in general. No matter where one’s taste in art rests, Walking on Water will hold immense amount of telling details, emerging as something deeper than the exhibition being profiled. Viewers will amass plenty of food for thought, and they’ll be sufficiently entertained in the process.

Walking on Water opens at The Hot Docs Ted Rogers Cinema in Toronto on Friday, May 17, 2019 and at the Vancouver International Film Centre on May 24.

Check out the trailer for Walking on Water: