Review: The Sun is Also a Star 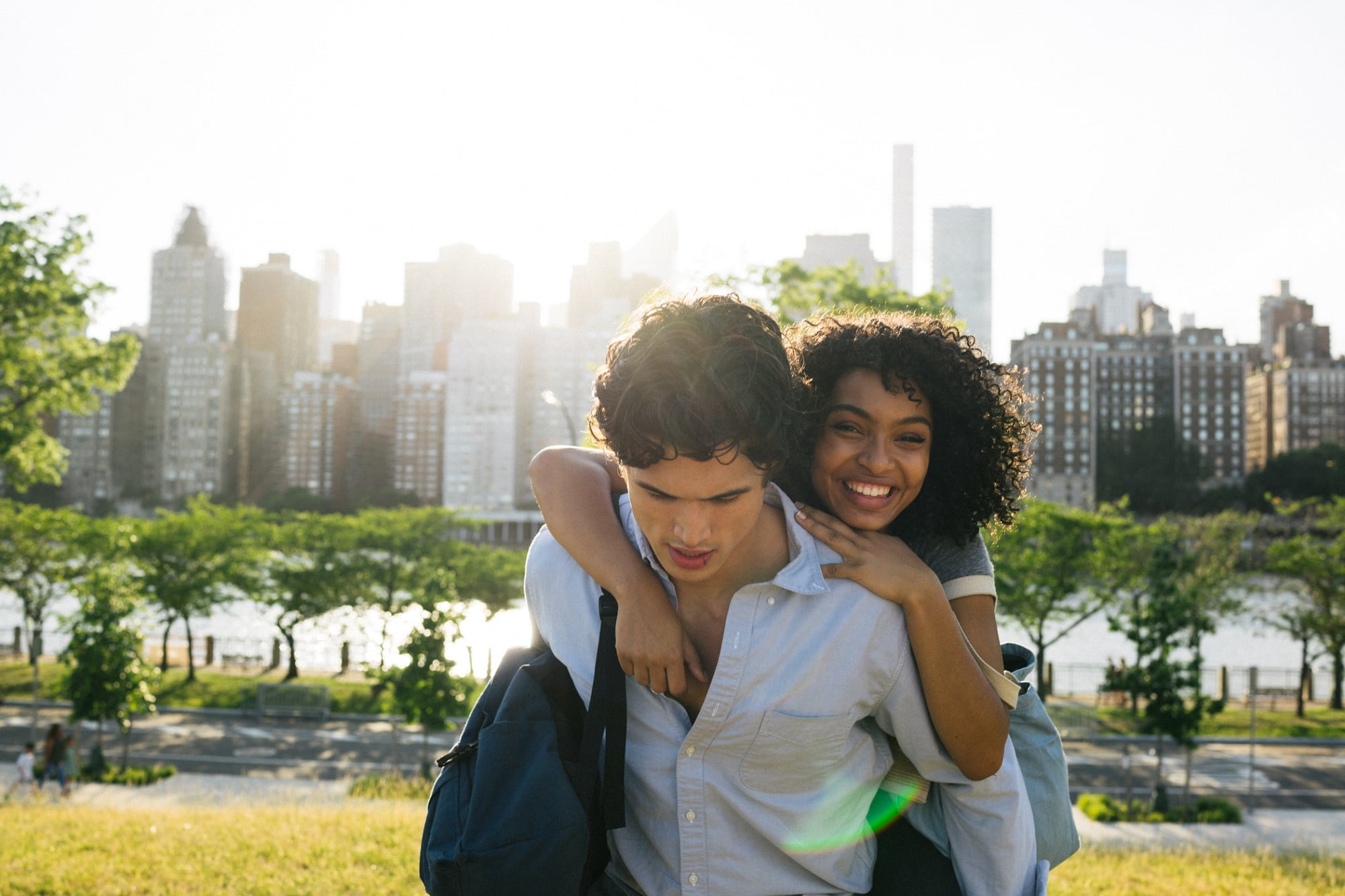 The young adult romance The Sun is Also a Star has a low key charm, hopeful demeanour, exceptional direction, and two likably down to Earth lead performances that help to make up for a rather large storytelling shortcoming at its centre. A perfectly chill and laid back late spring/early summer movie (even when things take a turn towards the melodramatic), The Sun is Also a Star is as restrained as young adult romances tend to get, and its overall demeanour in telling a story of two stressed out people in search of better tomorrows is greatly appreciated.

Natasha Kingsley (Yara Shahidi) is a science and logic loving high school junior in New York City who’s about to experience the most stressful day of her young life. Although she’s lived in America for almost a decade with her well educated father (Gbenga Akinnagbe), mother (Miriam A. Hyman), and 11-year old younger brother (Jordan Williams), her family is due to be deported back to Jamaica in twenty-four hours. Natasha, fearing a trip back to Jamaica will damage her prospects for the future, is frantically trying to set up meetings with lawyers and immigration officials that could help reopen the family’s case. Natasha’s parents would prefer her to stay home and keep packing up belongings, but she persists long after they’ve given up hope.

Daniel Bae (Charles Melton) is the youngest first generation son of Korean immigrants who desperately want him to become a doctor, although he’s much rather be a poet. The pressure for him to enter into such a profession is smothering, thanks to the fact that his older brother (Jake Choi) is an arrogant, entitled slacker who still works in the family’s modest retail business. On the same day that Natasha is running around the city trying to get her family’s legal affairs in order, Daniel is scheduled to have an alumni interview with acceptance officials from Dartmouth. They first cross paths when Daniel notices Natasha’s jacket while he’s hanging out with a friend at Grand Central Station, and eventually he sees her again on the subway and starts following her. After saving her from getting hit by a speeding car, Daniel asks Natasha if she wants to hang out. She tenuously agrees, and the fact that both of their appointments get rescheduled helps.

The set-up for The Sun is Also a Star, which is adapted from a novel by Nicola Yoon (Everything, Everything), is exceptional. Director Ry Russo-Young (Nobody Walks, Before I Fall) has made one of the most gorgeous looking young adult romances of all time, and probably the best photographed studio picture of the year thus far. Aided spectacularly by cinematographer Autumn Durald, Young captures the natural beauty and grit of a nice day in New York. The film has a natural, sunkissed warmth to it that’s soothing, and a perfect match for Young’s choice of tone. 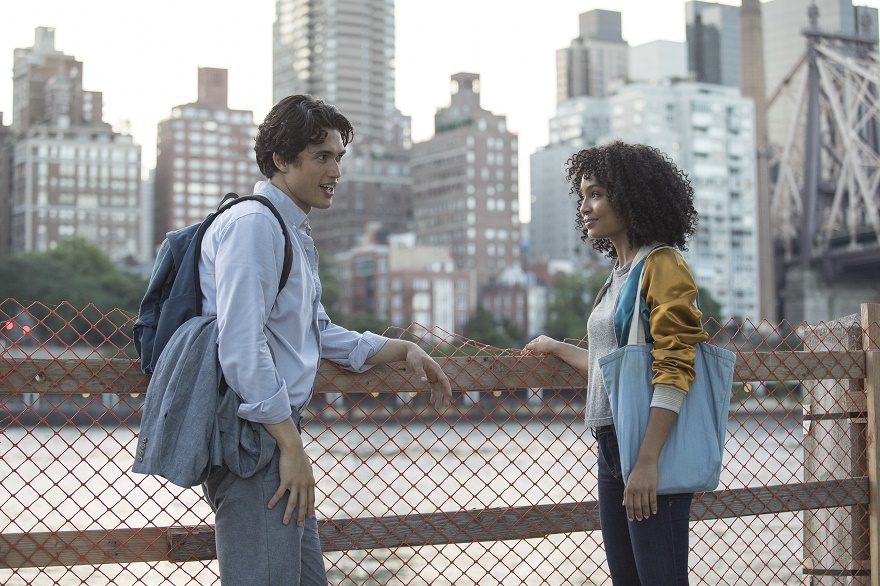 Young, Melton, and Shahidi make an interesting choice that turns The Sun is Also a Star into something that feels less like a romance and into a more rewarding film. Shahidi and Melton, who both display tremendous talent for believable understatement here, feel more like two strangers who come together in hopes of salvaging a trying, stressful day that neither one wants to go through with. Their banter and friendly chemistry is instantly relatable and calming. Young responds in kind with her direction, which allows plenty of room for her young performers to find the voices of their characters. Despite The Sun is Also a Star being built around the gambit of a single day, whirlwind romance, Young’s direction and pacing evocatively captures the longing of two people – romantically linked or otherwise – who want to stay in the moment they’re sharing as long as possible before going back to the lives that were stressing them out.

If The Sun is Also a Star were a film about a new friendship it might’ve worked better. The biggest problem with The Sun is Also a Star is that it’s all too keen to launch into the romantic aspect of the story as soon as possible, and through no fault of Young, Melton, or Shahidi, it all kind of unravels. The first conversation Daniel and Natasha share is about love, and it throws the previously intriguing material off its axis. Melton is forced into a position where he has to sound charming when some of the things he’s being forced into saying sound creepy to someone he’s just met. There’s no building to this romantic connection, and very little of a “getting to know you” phase. I know that The Sun is Also a Star is built around a finite timeline, but the escalation here is more implausible than the conveniences and contrivances that brought them together in the first place. I’m not sure if that’s a problem with Yoon’s source material, a shortcoming of the script from Tracy Oliver (Girls Trip), or Young being told that her film’s unique pace had to be quickened. At any rate, it’s a poor decision that makes the romance somewhat distracting when put into contrast with the more intriguing ideas the material has about human interaction and the nature of cosmic coincidences.

It’s very hard to overlook how gracelessly the otherwise graceful The Sun is Also a Star stumbles into its own romance, but there are so many little details outside the margins of the story that make it consistently watchable and entertaining; from how New Yorkers are depicted on a scale from “agreeably pissy, sarcastic, and empathetic” to “openly uncaring,” or musings about hair care products for black people and their history in America, or the unique soundtrack that blends classical orchestral scoring with easy listening and modern day emo rap. Young’s approach, the relaxing tone, some gorgeous cinematography, and a pair of assured lead performances are an embarrassment of riches for material that shoots itself in the foot so early. The Sun is Also a Star is a film with a single, but not insignificant nagging problem that stays on the right path and never gives in to the worst impulses of the genre.

The Sun is Also a Star is now playing in theatres everywhere.

Check out the trailer for The Sun is Also a Star: