Review: Godzilla: King of the Monsters

I’m having a hard time saying that Godzilla: King of the Monsters is the worst film ever spun off from the titular giant monster, but in my heart I want to call it that. Granted, this is a character that has weathered such duds as Godzilla 1985, Son of Godzilla, All Monsters Attack, and that eminently regrettable American remake from 1998, which are films so thunderously inept that there’s nowhere to go but up from such low points. Those were also films where people struggled mightily to figure out what to do with the radioactive titan during periods of stagnancy, so the dire, hollow, empty, and soulless nature of Godzilla: King of the Monsters, which comes hot on the heels of a spectacular American reboot in 2014 and the rich and ridiculously fun Shin Godzilla, all the more crushingly disappointing. Less of a Godzilla movie and more of a Transformers styled mashing together of blurry action sequences and an overabundance of uninteresting, painfully boring story and characters, Godzilla: King of the Monsters might not the the worst on screen appearance for the big guy, but I can’t think of one of his films that left me feeling more deflated and depressed the longer it droned on.

Godzilla: King of the Monsters takes place several years after the events of the 2014 film among a bunch of characters that mostly weren’t in the previous entry. Mark Russell (Kyle Chandler) – who’s a scientist and researcher of some sort, but I can’t explain his actual job title and the movie doesn’t care in the slightest – is called away from researching wolves in the wild by the independent monster tracking agency, Monarch. His wife, Emma (Vera Farmiga, also playing a doctor of indeterminate specificity), and daughter, Madison (Millie Bobby Brown), have been kidnapped by a British ecoterrorist (Charles Dance) who wants to use one of the Russells’ inventions – a contraption that can sonically recreate the call of an alpha titan – to wake up all the monsters hiding in the earth from their slumber to wreak havoc and hit the reset button on the environment. The main goal of the villains is to wake up “Monster Zero,” better known as the three-headed Ghidorah, located in Antarctica, who’s a bigger alpha than the currently dormant and resting Godzilla. Mark initially thinks that the best course of action to save his family and the rest of the world would be to destroy all the remaining titans, but he quickly realizes that humanity doesn’t stand a chance against Ghidorah and the newly risen monsters (including Mothra and Rodan) without the help of Godzilla.

Directed and co-written by Mike Dougherty (Trick ‘r Treat, Krampus), Godzilla: King of the Monsters launches into a new direction for the franchise with almost exclusively new characters so quickly, recklessly, and with little explanation or justification that one could be forgiven for thinking that they somehow missed an entry into the franchise that should’ve come between Gareth Edwards 2014 effort and this (and, no, I’m not talking about Kong: Skull Island, which is brought up in passing since it’s now part of this franchise, but it has little to no bearing on anything happening here). It’s a decision that dooms the film from the start because it strands viewers with a whole mess of unlikable, stock characters that range from negative one dimensions to a single dimension at best.

But shouldn’t that be a good thing, you might ask? Can’t we just have fun watching Godzilla and his friends and enemies smash up cities and revel in the carnage? Well, it could be if Godzilla: King of the Monsters didn’t find Dougherty and co-writer/frequent collaborator Zach Shields so weirdly enamoured with their ineffective, needlessly overqualified human cast and creating a story that doesn’t make a lick of emotional or logical sense. Godzilla: King of the Monsters is the kind of film where actors are just parts of the set dressing that provide exposition, which in a fun B-movie could probably be forgiven. Here, in a bloated 132 Hollywood cash grab, their endless prattling on comprises three-quarters of the film. Anyone looking for some kaiju smashing catharsis will get a couple of scenes here and there – all of them marred by murky cinematography and Michael Bay level editing, although, on a positive note, there are more close-ups of the monsters this time out and the detailing is nice – but they’ll mostly be waiting for the final showdown, which isn’t good, silly, or badass enough to justify sitting through a butt-numbing running time spent watching uninteresting people shout and glare at each other.

Most of Godzilla: King of the Monsters revolves around watching Kyle Chandler angrily telling everyone around him that they don’t know what they’re doing, and frequently looking off in the distance while standing into the pouring rain. While I’ve wanted to see Chandler sink his teeth into a role exactly like this one for quite some time, it’s just a shame that Godzilla: King of the Monsters gives him room to ham it up to the high heavens, but gives the audience nothing in return. Farmiga seems checked out, and Brown looks like she can barely make it through a single scene without wanting to crack up laughing (even when she’s given the film’s token scene of someone eliciting a single, rolling teardrop). Dance is such an underused and undeveloped villain that I kept forgetting he was even in the movie whenever he’s not on screen, and every time he resurfaces he adds precisely nothing interesting. 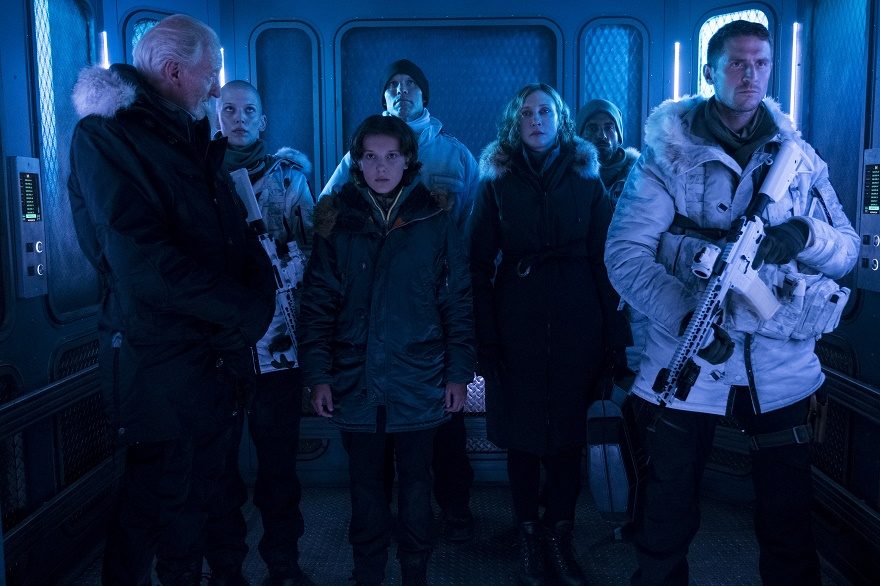 The actors all hang out in secret labs, bunkers, submersibles, and aircraft, surrounded by screens and various technical doo-dads and thingamabobs, that are virtually indistinguishable from any other major blockbuster, and their characters are either cannon fodder or comedic relief. Ken Watanabe and Sally Hawkins are the only returning human cast members from the original, and only the former has anything at all to do. Thomas Middleditch, Bradley Whitford, and O’Shea Jackson Jr. – as a Monarch tech guy, some other tech guy, and a random soldier, respectively – seem locked in a race to the bottom to see who can tell the most annoying jokes and mug the hardest in the process. Other than Chandler, who’s at least trying (albeit way too hard) to turn Godzilla: King of the Monsters into something watchable, the only actor who escapes this thing unscathed is Ziyi Zhang, who plays yet another indeterminable scientist, but at least she’s a bit of a smartass who gets in a couple of good jabs at the more annoying characters on hand.

The biggest problem with Godzilla: King of the Monsters, other than its complete and utter contempt for wonderment or originality, is the ridiculous belief that the viewer should care about a bunch of characters that are so poorly written that they barely qualify as archetypes. I believe that if a film is genuinely entertaining, a viewer can suspend their disbelief to any degree known to man. If a film is really swinging for the fences with spectacle in a bid to put butts in the seats, writers and directors can paper over any number of narrative shortcomings or ridiculous plot points with a laugh and a shrug. Godzilla: King of the Monsters, however, is a blockbuster that can’t decide if it wants to throw up its hands in utter creative defeat or if it wants to take itself way too seriously. From scene to scene, Godzilla: King of the Monsters bounces between laughable silliness and unearned and even sillier dramatic beats. Forget about the fact that all of the actors all seem to be inhabiting different movies in their minds already. Every scene of Godzilla: King of the Monsters seems to be written as if they’re from different movies; only linked together by the painfully forgettable story.

That resolute focus to turn this story and a larger and already far too cumbersome franchise into “a thing,” means that there’s nothing to focus on while waiting impatiently for the action to arrive but how idiotic and unfun this whole enterprise is. Godzilla: King of the Monsters is built around an early twist so perfunctory and nonsensical (but at least it’s telegraphed early on) that the film never recovers because it has no idea what to do with it. That kills any good will that the story can turn itself around, and it just keeps adding things that will make viewers scratch their heads. It’s the kind of film where Mark will loudly proclaim that people shouldn’t do something, and the very next scene that action is being done – FOR NO GOOD OR LOGICAL REASON – by one of the other dumb-dumbs on this mission because there wouldn’t be a movie without it.

No one outside of Mark and Emma (and the villain, I guess) can justify their reasons for being in the film or why they do the things they do. There are secret government weapons that are explained in lugubrious, unnecessary detail, but once they’re employed the completely ignore all of the science they wasted time spelling out. There are noble sacrifices that are made, but they don’t have to be, since there are other more obvious and interesting solutions staring the viewer in the face. The storytelling is so self-serious, contradictory, and shoddy that I refuse to believe that Godzilla: King of the Monsters started filming with anything close to a usable script. Godzilla: King of the Monsters is a perfect example of what Roger Ebert used to call, “The Idiot Plot;” a story so moronic and nonsensical that the only way to suspend one’s disbelief and buy into it is to realize that every character in the film is a massive idiot. Not having characters worth following, a story that can be followed at all, or more fun than exposition is an invitation to make sure viewers focus on all the things wrong with the picture.

But those kinds of movies can be fun and somewhat charming at times. I like stupid fun. I just want the stupidity to actually be fun and not soulless and exhausting. Godzilla: King of the Monsters doesn’t hold any fun until it’s Boston smashing finale, and even then it’s not worth sitting through the rest of the movie to get there. Edwards’ 2014 Godzilla held a lot of promise and delivered on every possible level. That was a fun motion picture that was actually about something greater than smashing up a bunch of buildings. Kong: Skull Island was well liked by many, but also an overstuffed step in the wrong direction for the budding franchise. Godzilla: King of the Monsters – a film that I was honestly looking forward to – is so awful that it makes me fearful that the forthcoming Kong vs. Godzilla picture (which is already well into production) will be similarly hobbled by too many poor storytelling choices. Next to a Transformers sequel, Godzilla: King of the Monsters is as awful as major studio tentpole production gets, and it breaks my heart to say that.

Godzilla: King of the Monsters opens in theatres everywhere on Friday, May 31, 2019.

Check out the trailer for Godzilla: King of the Monsters:

So I saw a screening Of “Godzilla: KOTM” last night that I was really genuinely looking forward to. This morning I’m still reeling from how disappointingly god awful this movie was and started googling reviews to see if I wasn’t alone. Thank you for this review and not pulling any punches, I couldn’t have said it better myself. It really is that bad!!!