Review: Sorry for Your Loss 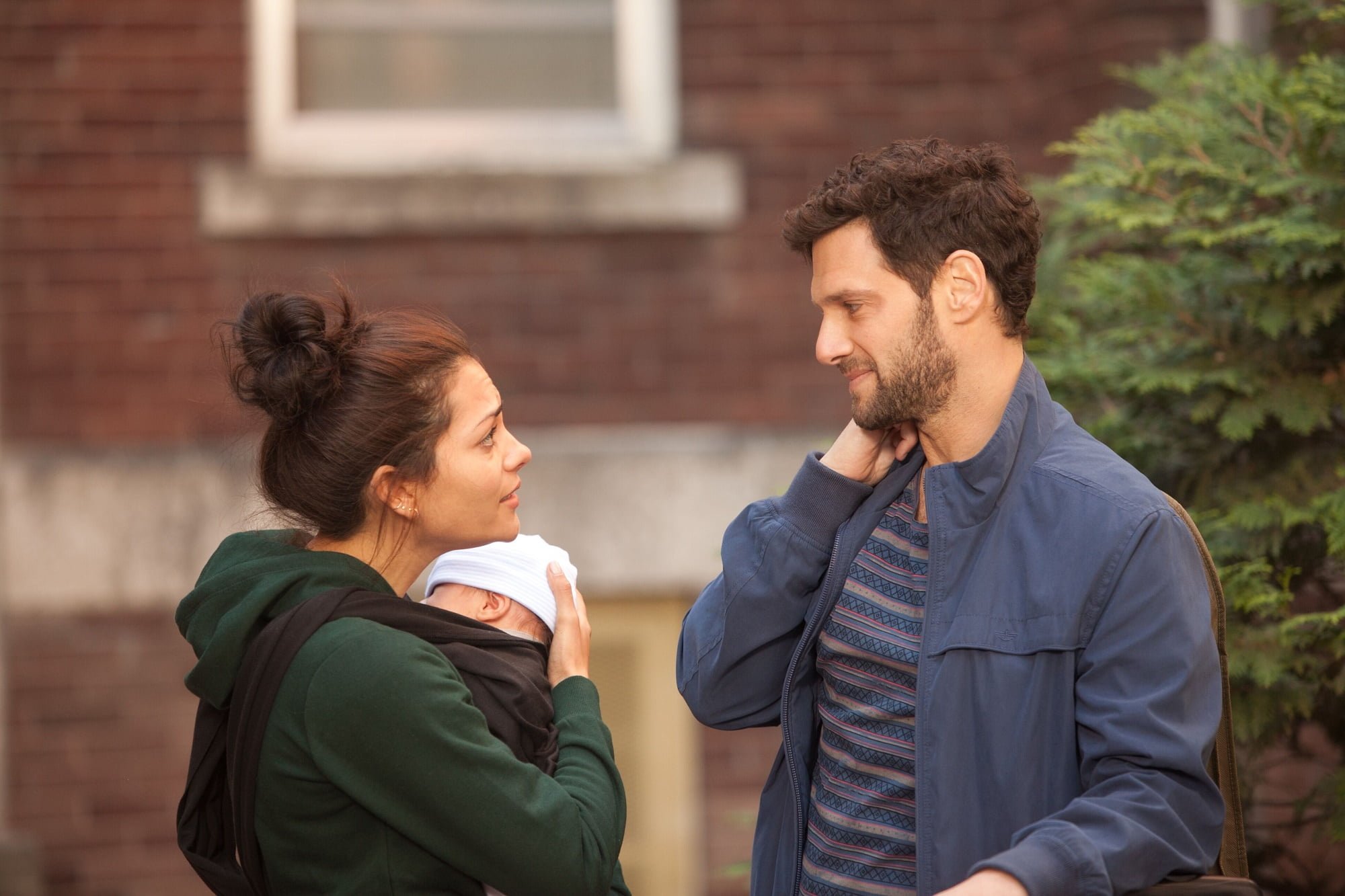 The mediocre and largely forgettable Canadian comedy Sorry for Your Loss blandly mashes together a bunch of easily digestible cliches about life, death, and family, jokes that are deliberately made in poor taste, and a handful of good performers putting in decent work for an ultimately losing cause. It’s fitting that the plot of Sorry for Your Loss, the latest film from writer and first time feature director Collin Friesen, revolves around a dead man wanting his ashes scattered along the fifty yard line at a football stadium because it feels like it’s been crafted by people who only watch bits and piece of movies that air while they’re waiting for a sporting event to come on. It’s an ultimately soft-hearted movie about finding oneself made for dudes and bros who insist that real men don’t cry about anything, and anyone who cops to having real and complex human emotions is being a whiny baby. Those kinds of films can be somewhat amusing, but there has to be some sort of satire in play or a counterbalance to all that testosterone, and it’s that ineffable bit of humanity that Sorry for Your Loss is missing almost completely.

Ken (Justin Bartha), a frustrated marketing executive for a brewery who one day dreams of running his own gastropub, is trying and failing to balance his thankless day job with his duties as a new father. One day, he gets a phone call telling him that his estranged father (John Bluether) has passed away. Unlike many people who hear that a parent has died, Ken is reluctant to leave his wife (Inbar Lavi) and baby to travel to Winnipeg for the funeral. He begrudgingly agrees to go, say a few words, and settle some matters tied to dad’s estate, hoping that there might be some sort of inheritance involved. There is an inheritance of about $200,000, but in order to claim it Ken has to find a way to dump dad’s ashes at Investor’s Stadium, the home field of the dead man’s beloved Blue Bombers. In an arbitrary and unnecessary plot device tweaked and taken straight out of Brewster’s Millions (a much better film that talked about death against the backdrop of sports), Ken only has two days to accomplish this task and have it be witnessed by the estate’s lascivious executor (Bruce Greenwood), or the money goes directly to the main lawyer involved (Kevin McDonald) for the purposes of putting a new addition onto the local country club.

Sorry for Your Loss has a cast and overall concept that hint at some potential, but it’s only partially followed through on, and never in creative or hilarious ways. It’s the kind of film where the actors are doing their part, and they have great chemistry with each other, but they aren’t saying or doing anything that’s all that surprising or amusing. There are barely any chuckles to be found in Friesen’s script – and only one lone belly laugh late in the film thanks to Greenwood’s ability to turn nearly any phrase he’s given into deadpan gold – but the actors are trying their best. Sorry for Your Loss is the kind of movie where one can see that the actors are seasoned and well directed, but that not much thought was put into how the film itself should function visually or emotionally. 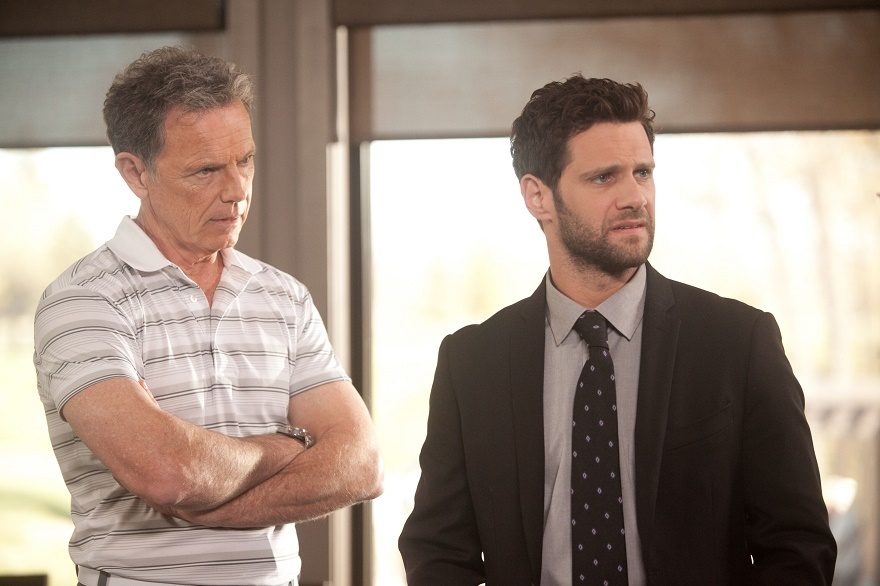 It’s a nifty twist to make Ken into a character that doesn’t particularly care that his cad of a father passed away, but Friesen doesn’t find an organic way to consistently fill the emotional void at the centre of Sorry for Your Loss. It’s plot mechanics are cobbled together from cliches. Ken will reconnect with old friends, he’ll learn things about his mom (Lolita Davidovich, who should have more to do than she ultimately does) and dad that he never knew before, he’ll question his relationship with his wife and whether or not he’s actually happy or sexually fulfilled, and that’s about it.

If the characters were a little more likable or interesting, Sorry for Your Loss might’ve been a more forgivable misfire, but in place of any depth, Friesen just populates his film from wall-to-wall with un-PC, off colour jokes about post-pregnancy periods, immigrants, poopy diapers, unwanted lap dances, date rape, spur of the moment handjobs, and people with special needs; all of which are delivered competently enough and mostly without malice, but without a lot of conviction or energy. It’s understood that all the characters in Sorry for Your Loss are all basically self-centred jerks, but they aren’t interesting or funny enough to build a high concept comedy around. It’s also a style-free affair, with bland cinematography, sometimes awful editing that threatens to step on the film’s comedic timing, and a soundtrack and score that’s indistinguishable from any number of other similarly pitched Canadian indie flicks and television shows. Characters are constantly moving the plot of Sorry for Your Loss along at a decent enough clip, but it’s mostly so the viewer doesn’t have to sit around too long for the inevitably bittersweet ending to arrive.

Friesen does have a few of aces up his sleeve, however, in the overall performances of Bartha, Greenwood, and Lavi. Bartha has a knack for soft-spoken sarcasm that’s been underrated for quite some time and is put to good use here (even if turning this into something great is a bit of a tall order to ask of anyone). Greenwood is clearly having a blast cutting loose and playing as far against type as possible, and even though the script isn’t giving him anything all that specifically funny to do, he sells it well by playing the most charismatic douchebag possible. And although she’s only seen at the beginning, end, and away from the main action, Lavi steals several scenes from her co-stars based almost solely on her ability to sell the film’s grossest gags. Whenever Bartha is paired alongside Greenwood or Lavi (which is thankfully frequent), Sorry for Your Loss gives a hint of what this could’ve been like with a more thoroughly workshopped script.

At least Sorry for Your Loss doesn’t take its outlandish plot or alpha male worldview all that seriously. Despite not being very funny, it’s still a comedy that wants to entertain, and it’s far from unwatchable. Even at their best, the leads are told to perform the material with a cool sense of detachment; like they seemingly don’t care about anything that’s happening outside of their own selfish needs and desires. It’s a very masculine sort of look at life and death, but not necessarily in a good way. Comedy is often built from tragedy and misfortune with a greater sense of stakes, not from a bunch of righteous jerks who keep stiff upper lips. There’s nothing funny or amusing about people who almost always refuse to show any sort of vulnerability unless those personalities are cranked as high as they can go. Only Greenwood is afforded such an opportunity here, and that’s ultimately the difference between Sorry for Your Loss resonating as a silly, darkly comedic diversion and not resonating at all.

Sorry for Your Loss opens at Carlton Cinemas in Toronto on Friday, May 31, 2019. It also opens at Landmark Towne Cinemas in Winnipeg starting on June 10.

Check out the trailer for Sorry for Your Loss: