Review: Always Be My Maybe 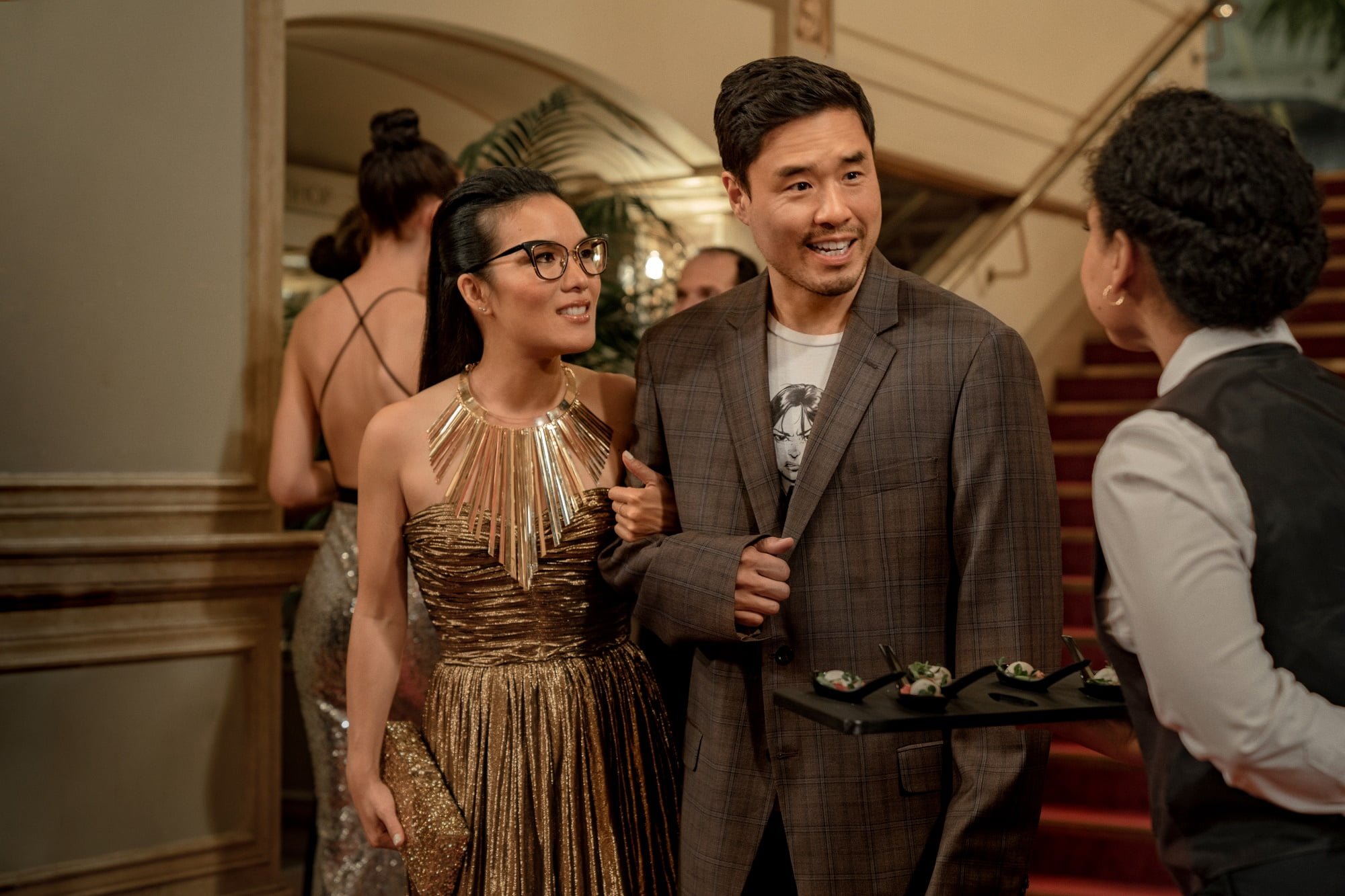 Always Be My Maybe is the best case scenario for a predictable romantic comedy where any savvy viewer will know every single thing that will happen from the second the movie starts. Rising above its rather pedestrian plot and filmmaking, Always Be My Maybe has a sharp script written by its stars – who give performances so great it should hopefully and rightfully give them the A-list film careers they deserve – and some truly inspired, gut-busting setpieces. It might be coasting along on the effortless comedic chops of Ali Wong and Randall Park and the material they’ve helped to create for themselves, but there are worse things that a movie could be, and the cultural specificity of the film’s main character means it functions in many ways as the antithesis of Crazy Rich Asians. Think something more along the lines of that film’s culture clash romance, but instead rework it and retitle it One Reasonably Wealthy Chinese-American Woman and A Stoner Korean Dude Who Still Lives With His Dad, and you’ll have an idea of the overall vibe Always be My Maybe is going for.

Since they were kids and next door neighbours growing up in San Francisco, Sasha Tran and Marcus Kim were inseparable best friends. She would always go over to his house to spend time amongst his loving, close knit family because her own parents were rarely around. One night at the end of a particularly sad day when they were eighteen, Sasha (Wong) and Marcus (Park) end up having sex in his car. Their dynamic is immediately altered, things get seriously awkward, and they go their separate ways. As an adult, Sasha moves to Los Angeles to become an acclaimed celebrity chef, engaged to an equally famous restaurateur (Daniel Dae Kim), who not so subtly hints that he wants to see and sleep with other people. While her finace is away in India, Sasha takes the opportunity to travel with her long suffering assistant (Michelle Buteau) to her old hometown to check out the progress on her newest restaurant. When she needs the HVAC unit at her rental property fixed, who should show up to perform the repairs but Marcus and his father (James Saito). He still lives at home, still works with his dad, still performs with the same funk-rock band he fronted in high school, and he spends most of his non-working hours smoking weed and hanging out with his hyperactive, hippie girlfriend (Vivian Bang). Sasha and Marcus don’t hit things off again immediately, but gradually during her time back in San Francisco they start to realize that they might be together than apart.

Always Be My Maybe is the feature directorial debut of television producer Nahnatchka Khan, and while it’s certainly funny throughout, it’s technically dodgy. Outside of a couple of nifty tracking shots here and there, Always Be My Maybe moves and looks precisely like a television sitcom. Some occasionally choppy editing doesn’t help with the overall look and tone of the film, but all of this is of little consequence. Always Be My Maybe comes with a firmly drawn up mission statement to entertain, amuse, and move viewers by updating traditional genre tropes for underserved, culturally specific audiences. It’s a film where writing and performance are paramount, and Always Be My Maybe hits the bullseye in both respects. 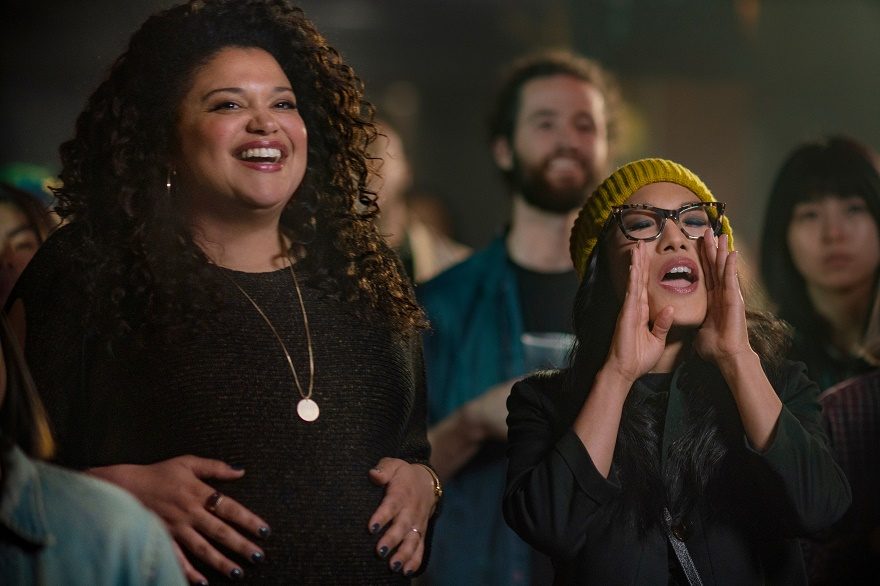 Wong and Park display some of the best romantic and comedic chemistry of the year here, which makes their never-in-doubt will-they-or-won’t-they plot (co-written by Michael Golamco) a lot easier to stomach. While a great deal of the film’s appeal comes down to placing Wong and Park’s cultural identities at the forefront of their characters without making tons of jokes or plot points surrounding their ethnicities, Always Be My Maybe is at its best whenever its stars – and their stacked supporting cast of character actors, especially Buteau, Bang, and a notable, extended cameo from an A-list star (which is too good to spoil and I actually had to sign an NDA saying I wouldn’t give any specifics about it at all) – are able to bounce sharply delivered punchlines off of one another.

Sure, Always Be My Maybe has to go through the rom-com paces to some degree like marking off items on a checklist: They’ll realize their partners are wrong for them. He’ll make her realize that the past she demonizes in her mind wasn’t so bad. She’ll make him realize that he’s very talented and his fears about abandoning his dad are holding him back. Just as he’s getting the courage to tell her how she truly feels, he’ll have missed his opportunity. Hidden secrets and resentments will pull them apart just as the viewer thinks they might finally get together. None of this will be unfamiliar to genre connoisseurs, but what sets Always Be My Maybe apart from the pack is the fact that the main characters are relatable, fully realized human beings and not archetypical sketches and walking cliches.

Park turns Marcus into more than just a slacker-with-a-heart-of-gold, and instead portrays him as a wounded soul who represses his best ideas out of a fear that terrible things will happen and he’ll end up failing. Wong’s character echos those sentiments to some degree, but her character is so focused on her career that professional and romantic failure aren’t options in her mind. Instead of playing Sasha as a stereotypical perfectionist who forgot what it’s like to have fun, Wong portrays her as a strong, professional women who’s both sick of other people’s bullshit, but simultaneously unaware that she willingly buys into it as long as it means her worldview is kept on track. These characters compliment and clash with one another in realistic, reasoned ways, meaning any romance and friendship between the characters is hard earned through the script and performances. They’re more interesting main characters than most romantic comedies are built around, and even if the story is constantly sticking to the straightest path possible, Park and Wong have made it a journey worth following.

But perhaps most importantly, there aren’t any bad jokes to be found in Always Be My Maybe. Even if some are funnier than others, the hit to miss ratio of gags peppered throughout Always Be My Maybe is almost attains god-level status (especially those surrounding the cameo I signed legally binding paperwork to not talk about). Always Be My Maybe is a film created by a pair of writers and stars who know how to milk a formula for all its worth by bringing their A-game to the table. Their frankly frightening talent as writers and collaborators makes me hope they’ll work on another film again in the near future. But even if they go separate ways, Always Be My Maybe functions as a perfect calling card for both Wong (who shockingly hasn’t been in that many films to date) and Park (who has been underrated for far too long and is more than ready for leading man work). Here’s hoping Always Be My Maybe propels them to another hard earned level of success.

P.S.: Stick around for the credits.

Always Be My Maybe is available to stream on Netflix starting on Friday, May 31, 2019.

Check out the trailer for Always Be My Maybe: