Failed businessman and auto manufacturer John DeLorean lived a life filled with so many ups, downs, missteps, successes, and blunders that his narrative would be perfect fodder for either a biopic or a documentary. Over the years, many writers and producers have tried and failed to bring his story to the big screen in a semi-fictionalized format, but directors Don Argott and Sheena M. Joyce seem to have cracked the code with the docu-fiction hybrid Framing John DeLorean, a documentary that blends traditional journalistic, interviewing, and researching techniques, with a cast of big name actors dramatically reenacting key moments in the life and times of the movie’s subject. On top of that, it’s an examination into the process actors undertake when trying to figure out someone as complicated and contradictory as John DeLorean. It comes together better and more fascinatingly than one might expect. Framing John DeLorean is an entertaining, high wire filmmaking experiment that does well by the controversial visionary at its centre, while transparently deconstructing itself in the process.

American innovator, engineer, and business sector pariah John DeLorean always had an eye towards the future. In his early years working for Pontiac, he saved the struggling brand from being seen as the automobile of choice for “old ladies” by inventing (and basically forcing into production) the GTO, one of the most famous and beloved muscle cars in history. DeLorean’s flighty and costly ideas were too much for Pontiac, and when he left the company, he sought to create the first new mass produced automobile since Chrysler. The DMC-12 was to be a sleek, entirely stainless steel sports car, with doors opening upwardly to the heavens instead of outward. It was an immediate sensation merely based on its look alone, but the DMC-12 was plagued by performance and manufacturing issues (not to mention that it was produced at a factory located in Belfast, Northern Ireland at the height of The Troubles). When he was struggling to secure the finances necessary to keep the production line moving along, DeLorean was caught up in a drug dealing scandal and busted for trafficking cocaine. Although he put on a brave face and was acquitted of the charges, DeLorean’s image and legacy would never recover, despite his previously maligned vehicle becoming one of the most instantly recognizable and desirable props in the history of cinema just two years after the line was discontinued.

There’s a lot of ground to cover in Framing John DeLorean, not just because all of Argott and Joyce’s interview subjects along the way seem to have wildly differing opinions of who their subject was as a businessperson, family man, and a friend (including his kids, with his son showing some sympathy, but who mostly has some harsh, necessarily realistic views on his dad’s behaviour). Argott and Joyce (who’ve collaborated on several documentaries in the past as producers and filmmakers) and writers Dan Greeney and Alexandra Orton also want to show how difficult it can be to make a fictional film about a real life subject where one is never entirely sure where the truth lies. 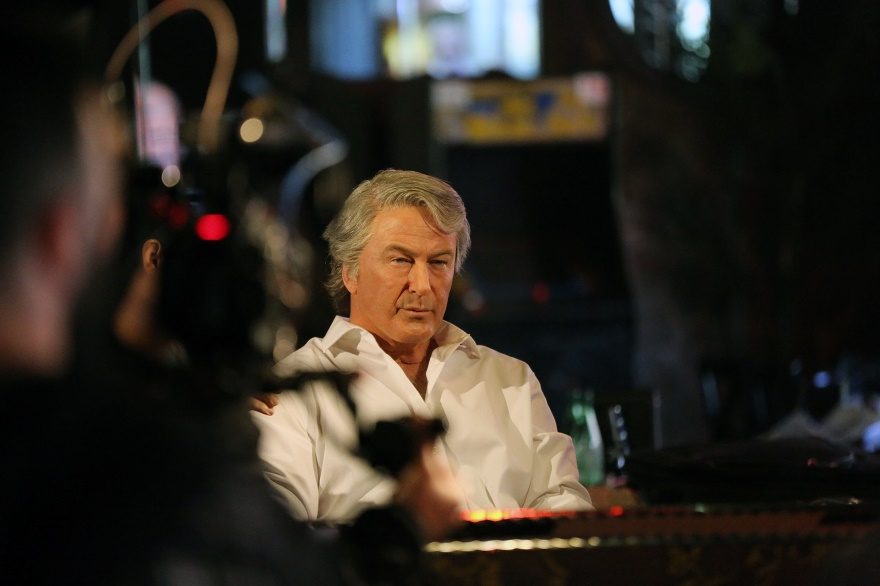 Framing John DeLorean casts Alec Baldwin – who was once tapped to play the automaker in one of several abandoned projects in the past – as its guide into DeLorean’s psyche. While there’s plenty of biographical detail on display thanks to the interviews and archival footage throughout the straightforward, traditional documentary portions of Framing John DeLorean, Baldwin is tasked with unravelling the motivation and temperment of a man who’s no longer around to speak for himself (and one who might be less than honest, even if he was).

It’s a great choice of casting, and Baldwin isn’t tooting his own horn when he states at one point when talking about DeLorean’s relationship to his estranged family that he “gets” where his character is coming from and why he’s willing to do incredibly boneheaded things for seemingly justified causes. Baldwin literally (though perhaps not performatively thanks to the film’s low budget and all the balls Argott and Joyce are trying to juggle) gives an acting masterclass on how to portray someone who lived a public, contentious life. Flanked in many of his scenes by Josh Charles, playing DeLorean’s right-hand man Bill Collins, and Morena Baccarin (who also shares her process with viewers), as ex-wife and former model Cristina Ferrare, Baldwin both performs his part and shows the work that went into it. Framing John DeLorean builds off that approach by constantly using Baldwin’s assumptions about his character to rhyme nicely with the contradictory recollections of the documentary’s interview subjects.

There’s still some doubt in many mind about whether the real life basis for the character Baldwin plays was a troubled and desperate man, a savvy con artist, or a patsy brought down by the fears of larger, more established corporations, but Framing John DeLorean suggests that there aren’t any right or wrong answers and that the truth lies somewhere in-between. It might be a film that’s trying to do too much at once, but everything it attempts is fascinating food for thought delivered in an entertaining manner. It peels back the layers of a complicated man while simultaneously peeling back the layers of its own construction.  There was no one quite like the man behind the DMC-12, and there’s no other movie quite like Framing John DeLorean.

Check out the trailer for Framing John DeLorean: