Review: The Secret Life of Pets 2 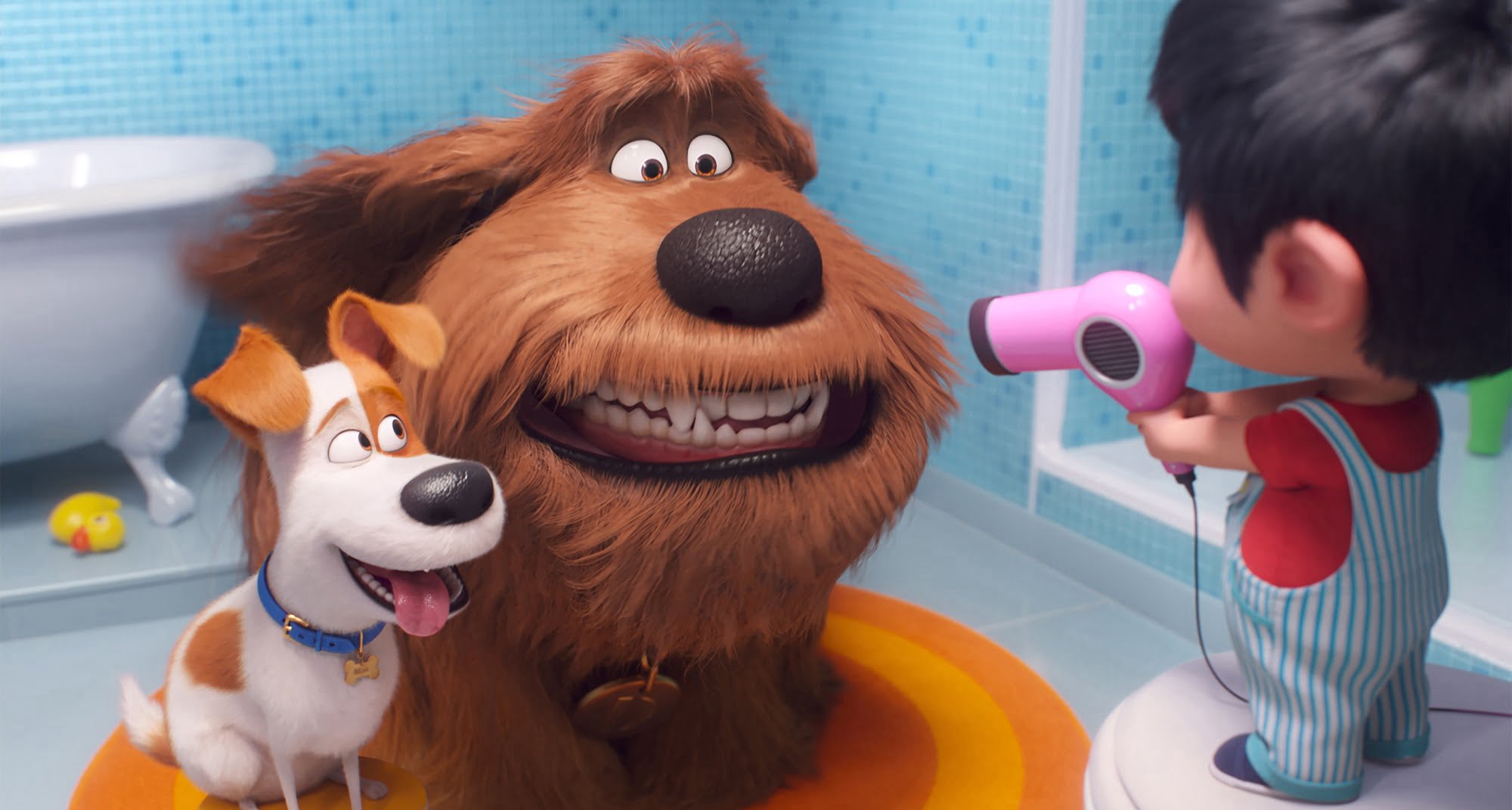 A limp, dull animated sequel that pretty much ignores everything that made its predecessor a low key charmer, The Secret Life of Pets 2 is a film that only exists to sell merchandise to kids and adults in the laziest possible way. The jokes are of the sub-sitcom variety, it can’t decide on a single story that’s worth telling in a feature length film, it ignores virtually everything interesting set forth in the previous installment, there’s absolutely nothing here that could appeal to adults, and what little there is might only appeal to wee ones that are still pre-verbal. It’s visually appealing, but that hardly makes The Secret Life of Pets 2 worth seeing if you don’t have toddlers in your home chomping at the bit to see it. If you’re in preschool, you are older than the target demo for The Secret Life of Pets 2.

Unlike the first film, which had a single, well told story about a dog named Max (voiced then by Louis CK, but now by Patton Oswalt, for obvious reasons) trying to adjust to life in the big city with a second pooch, Duke (Eric Stonestreet). The Secret Life of Pets 2 still partially takes place in New York City, but it can’t figure out how to bring the band back together. Instead of one story, The Secret Life of Pets 2 tells three different, brazenly episodic tales that would barely cut the mustard if the film were chopped up and made into a television series. In fact, the characters in The Secret Life of Pets 2 never allude to anything that happened in the first film, but carry themselves like they’ve evolved a lot over an indeterminate period of time that the audience never gets to see.

I actually had to check once this was over to see if there was a television series I missed that could fill in the answers to the numerous amount of questions I had. There were a couple of shorts, but no series, so it’s not me. The Secret Life of Pets 2 just doesn’t care about anything that came before it or advancing cute-as-a-button characters viewers might have an emotional connection to. The overwhelming tone of The Secret Life of Pets 2 – made by returning director Chris Renaud and screenwriter Brian Lynch – is “who cares? No one will notice or care.” That’s not only cynical, but neglects to realize the fact that the kids who saw and loved the first film are now four years older and they might’ve aged out of accepting something this lazily realized. 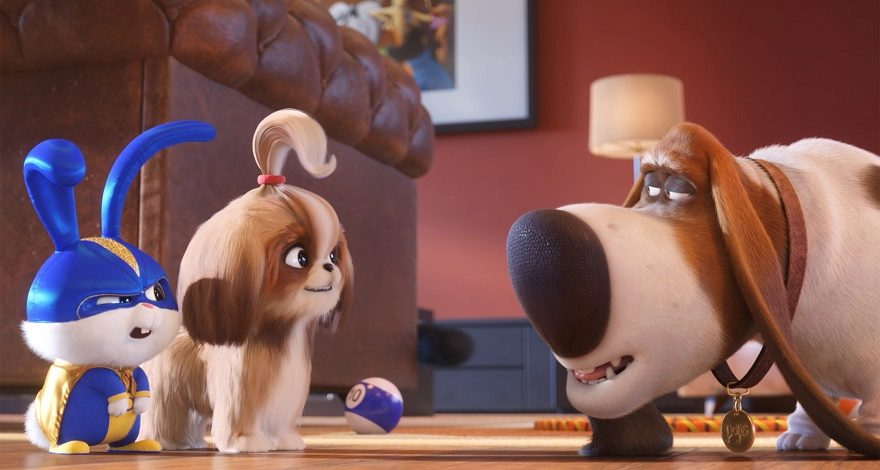 Max is actually given the worst of the film’s three concurrently unfolding plotlines. The neurotic pooch’s owner recently settled down with some guy and had a kid named Liam. The kid has grown on the child averse Max over the past couple of years (where the humans age, but the dogs don’t), and the dog has become overly protective of his new human. Max and Duke travel to the country to visit some of their owners’ family members, which raises the little dog’s anxiety levels to the breaking point, especially when he learns that he has to sleep outside. Max clashes with the farm’s resident sheepdog, Rooster (Harrison Ford), a true alpha male type who thinks Max is an incompetent wimp. This storyline, which takes place far away from the other actions in the film, feels unnecessarily mean and nasty; the kind of thing written by grumpy old folks who think millennials are a bunch of snowflakes and babies. None of it is funny or amusing, especially when it comes to watching Max getting borderline tortured just by being there. All of it is in service of “toughening up” Max, which might’ve meant something if the writing and plotting were actually thoughtful or well executed. It’s not, and it stinks.

The other two stories competing for what’s left of the scant 85 minute running time of The Secret Life of Pets 2 (which is nothing if not thankfully brief) are throwaways, but a lot more entertaining than the A-story involving Max. Former street urchin bunny Snowball (Kevin Hart) now has a superhero loving owner, and he gets a complex about it. He’s approached by a random cutie canine (Tiffany Haddish), asking for help in rescuing a tiger cub from an unscrupulous Russian circus. In the other thread, posh Pomeranian Gidget (Jenny Slate) has accidentally lost Max’s prized squeaky toy in the apartment of a crazy cat lady, causing her to turn to her nonplussed and not easily impressed feline friend Chloe (Lake Bell) for tips on how to act like a cat. Both stories benefit from the relaxed and nicely complimenting chemistry shared between Hart and Haddish and Slate and Bell, but only the latter of the two generates any real laughs. It’s not the fault of Hart and Haddish that their segment doesn’t stand out. It’s the fault of the writers not realizing that these characters and their mission could easily sustain a feature film on its own. Max and Gidget’s stories work as shorts. Snowball’s doesn’t.

The Secret Life of Pets 2 is an odd sequel. It wants to remind viewers that it has an eclectic cast of voice talents at every turn, but instead of making sure that there’s a good story, they’re all given equal billing. Sometimes that can be a good thing, but here it keeps cutting in half stories that have already been pared back to the bare minimum, and to a point where they no longer feel like the same characters from the first movie. I might be looking too deeply into this, but it’s very easy to pinpoint why I cared so much about the characters in the first film, and why I feel no investment or connection to anything happening in The Secret Life of Pets 2. It has less depth and storytelling chops than a cute dog or cat video on Instagram. It certainly looks cute, though. But if that’s the only reason you’re going to see The Secret Life of Pets 2, you should stop going to the movies for all the wrong reasons. If your kids want to see it, it’s fine, I guess, but consider yourself warned that this is less of a sequel and more of a cash grab.

The Secret Life of Pets 2 opens in theatres everywhere on Friday, June 7, 2019.

Check out the trailer for The Secret Life of Pets 2: