Domino, the latest film from controversial and divisive American auteur Brian De Palma, recently skipped theatres in most markets and went straight to VOD. It’s not hard to see why, despite the filmmaker’s pedigree. Domino is the kind of corny, overblown, tasteless potboiler that would’ve been shipped to VHS back in the 1980s (or at the very least something quietly released to a hundred screens or less by Cannon Films). It’s astoundingly dumb, and basically a work-for-hire gig for the director – best known for the likes of Carrie, Scarface, Mission: Impossible, Blow Out, and The Untouchables – but De Palma is too good of a filmmaker to leave Domino without at least some stylish entertainment value. Domino is a forgettable, sometimes laughable motion picture that’s almost made decent through the hiring of a director that’s overqualified for the task at hand.

Set in the not too distant future of 2020 for no good reason that I can think of, Domino more or less kicks off with a pair of cops in Copenhagen – Christian Toft (Nikolaj Coster-Waldau) and Lars Hansen (Søren Malling) – responding to what they think is a domestic disturbance call. When they arrive on scene, Christian discovers the body of a man who has been tortured and murdered and a cache of weapons and explosives in tomato crates. Their chief suspect, Libyan national Ezra Tarzi (Eriq Ebouaney), gives them the slip by slitting Lars’ throat, leaving the cop fighting for his life in hospital. Swearing revenge, but constantly being told to stay away from the case by his superiors because it’s “too personal,” Christian aligns himself with the female detective (Carice van Houten) assigned to investigate the officer’s attempted murder, but things are more complicated than they initially appear. Ezra has been on a vengeful quest of his own, and his target is the leader of an ISIS terror cell (Mohammed Azaay) who beheaded his father. The terrorist leader is also being tracked by the American CIA, and their man in Denmark (Guy Pearce) wants to blackmail Ezra into doing their bidding on foreign soil.

Although it touches upon how modern day terrorists rely heavily on social media platforms and governmental loopholes to forward their causes, Domino is too braindead to eloquently speak on such topics and instead focuses all its energies on weaving another tiresome, macho meditation on the folly of revenge. Working from a script by Danish writer Petter Skavlan (Kon-Tiki, The 12th Man), De Palma gives his own equivalent of the bare minium to Domino. Those familiar with De Palma’s previous films and his distinct, somewhat predictable sense of style will immediately recognize Domino as one of the director’s works, but it might as well be in service of a story that’s nothing more than an 82 minute Homeland episode that’s more stagnant than fresh. It’s a film that could be made by virtually anybody capable of directing a motion picture, but it just so happens to have Brian De Palma behind it.

The twists aren’t that surprising, and the characters are less exciting than the twists. If Domino had predominantly followed Ezra’s righteous revenge narrative, the film might’ve been onto something somewhat visionary. Ebouaney turns Ezra into the film’s most captivating figure, blowing the stock middle eastern stereotypes and boring, white bread protagonists around him practically out of the frame. Thankfully, a little less than half the film follows Ezra’s story (boosted somewhat by Pearce’s slightly over the top performance as the underhanded government stooge), meaning there’s some respite from the threadbare procedural that comprises the rest of Skavlan’s uninspired plot. It doesn’t make up for the fact that the other half of the film finds Waldau and Houten hopelessly unable to get a handle on their characters and clueless as to how De Palma wants them to play their scenes. 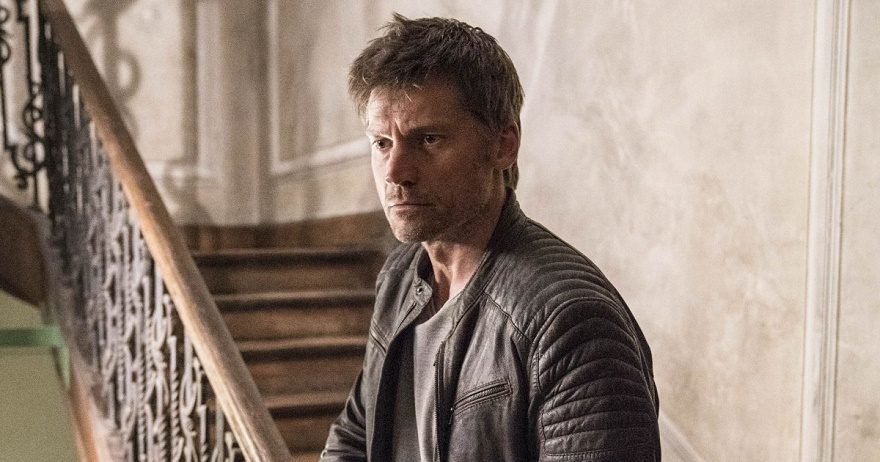 It’s impossible to tell with any certainty if De Palma wants viewers to take Domino seriously, with a healthy grain of salt, or as an outright satire of modern day tales of terrorism. There are some moments (like watching someone fall off a building into a pile of tomatoes waiting below or a hilariously overblown close-up of a USB phone charger) that are clearly mean to elicit laughs, pointing to De Palma’s abilities as a dark humourist. Other scenes are so hilariously overwritten that they just naturally play like comedy, even if they’re supposed to be taken seriously (like a moment where Waldau and Houten pull over in front of a windmill to express their grief; a scene that might be the worst of De Palma’s career). And yet, all the terrorist stuff (including a split-screen massacre at a public event and the uncomfortably racist, fear mongering coda) is too seriously mounted and woven in the fabric of the film that it’s hard to take Domino as brainless fun. Domino is like watching De Palma trying to do what worked in Body Double, Redacted, and Blow Out at the same time, only that the director has forgotten that those are three tonally different films.

De Palma tries his best to use his own greatest filmmaking hits in a bid to make Domino into something slightly more watchable and entertaining than it might’ve been with someone else at the helm. He still knows how to make a film in his signature style, as evidenced by the aforementioned split-screen sequence, plenty of deep focus shots, a voyeuristic push-in on Christian’s bedroom that eventually lands upon a handgun sitting on a nightstand, a nicely staged, purposefully awkward foot chase on terracotta rooftops, and a largely wordless climax told partially through the viewpoint of some binoculars. He sets all his tricks to a score straight out of a 40s or 50s noir, and De Palma’s sense of pacing is nothing if not energetic. He seems to know that the audience for something this trashy won’t care about expositional dialogue, and almost every time a scene has to end with a character providing a key bit of information, De Palma won’t dwell on it. He’ll just abruptly smash-cut to the next scene like he wants to get out of this thing as fast as the viewer does.

De Palma, Ebouaney, and Pearce make Domino as watchable as it can be, but that doesn’t make it a good motion picture or a notable entry into the director’s filmography. While it isn’t one of De Palma’s worst films (which is funny if you stop to think about it after watching Domino), it’s certainly one of the most forgettable. There’s not even much of a clue as to what could’ve drawn De Palma to the project in the first place. By the director’s own account in recent interviews, Domino was a problem plagued production that didn’t turn out exactly the way he intended and that the financing started to dry up while the film was already well into production. If that’s the case, Domino is pretty good for a salvage job, but that’s hardly an excuse for moving forward with a script that wasn’t great to begin with.

Domino is now available in Canada on VOD.

Check out the trailer for Domino: