Review: There Are No Fakes

Rigorously researched, exceptionally edited, and emotionally draining, the initially unassuming art world documentary There Are No Fakes might be one of the most vital, complex, and controversial Canadian films of the year. A film that starts off by talking about a single, but widespread crime that most casual observers wouldn’t think much about when looking from outside the highly lucrative world of fine art, There Are No Fakes doesn’t uncover a single fraud, but a shocking number of injustices all perpetrated in the name of profit, not all of which can be easily explained by the dozens of people on either side of the legal bar. No matter the ultimate outcome of this case’s continually mutating throughline, There Are No Fakes will give pause to anyone interested in getting involved with the buying of paintings, even from the most seemingly reputable of sources.

In 2005, Kevin Hearn, an art collector and member of one of Canada’s most successful bands, Barenaked Ladies, purchased a painting from an art dealer in Toronto’s posh Yorkville neighbourhood for the princely sum of $20,000. It was titled “Spirit Energy of Mother Earth” and was reportedly painted by sought after and acclaimed Anishinaabe artist Norval Morrisseau, otherwise known as Copper Thunderbird. When Hearn loaned out some works from his private collection to the Art Gallery of Ontario for an exhibition in 2010, he was informed by AGO curators that his Morrisseau was a fake. The Yorkville gallery that sold the work, fearing a ruined reputation, produced a dodgy letter of provenance for the painting and refused to give Hearn a refund, insisting that fake Morrisseau paintings didn’t exist. Hearn then filed a wide ranging lawsuit against the gallery, and by extension shone a light on the auction house and “private seller” who put the painting into the market in the first place. By shining that light, however, Hearn discovered a lot of darker shadows hiding behind the creation of his potentially fraudulent painting.

The first hour of There Are No Fakes finds director Jamie Kastner (The Skyjacker’s Tale, The Secret Disco Revolution) outlining the convoluted history behind Hearn’s painting and the legacy of Morrisseau. The good name of Morrisseau as an artist was tarnished by fakes flooding the art market literally by the thousands and largely without logical explanation, and it started years before his passing in 2007 after a lengthy slide into ill health. Auction houses and galleries were buying up these Morrisseau works relatively cheap and selling them for thousands of dollars in profits to private collectors, while owners of “undisputed” paintings by the same artist sought to rigorously discredit the dubious works that were reportedly completed sometime in the 1970s, but could date back to just around the turn of the century.

It’s a lot to take in during a single sitting. There Are No Fakes is thrilling, captivating, and detailed enough to probably sustain its own multiple part miniseries. Kastner also proves to be a braver filmmaker than most when one considers that most of his interview subjects are notoriously litigious and protective of their image. Kastner speaks with a variety of art world high rollers and powerful folks with money to burn that I’m even afraid to mention in this review because I’m afraid I might get sued just by mentioning them. While there are clear, unambiguous signs that something illegal has happened, Hearn has been advised that no court of law in Canada has ever deemed a work of art a fake because such claims are notoriously hard to prove and prosecute. The battle over Hearn’s disputed Morrisseau still continues to this day, and the legal headaches are far from over. And despite an overwhelming threat of censure and condemnation from certain parties profiled in Kastner’s film, There Are No Fakes is a remarkably balanced work of journalistic scholarship no matter how messy the case at the heart of it has become or how petty and/or image conscious the defendants appear in the context of the director’s work. Outside of Hearn, who brokenheartedly states that all he wanted to do was buy a painting, and a few other victims of this criminal enterprise, no one comes out of There Are No Fakes looking squeaky clean. 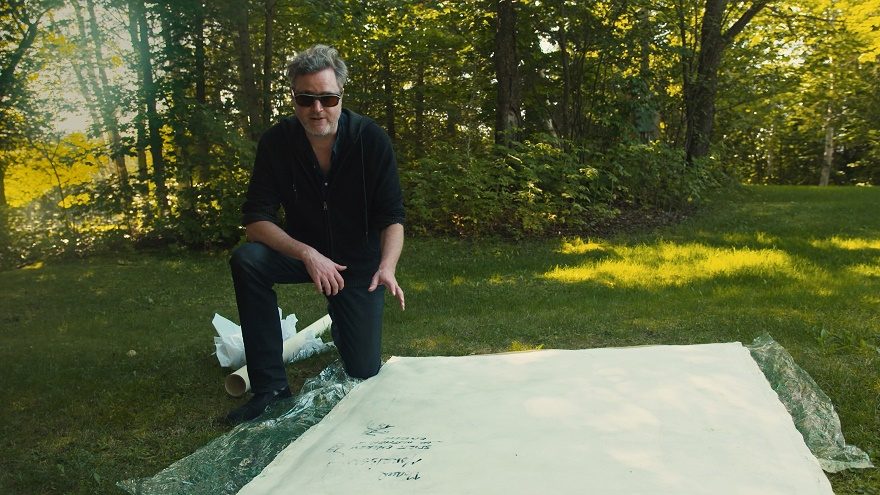 If the first hour of There Are No Fakes that outlines the various levels of fraud and deception that occurred isn’t damning enough, the film’s second hour uncovers painfully real traumas and crimes at the heart of the case. Kastner, like most documentarians posed with similar criminal and ethical quandaries, follows the money all the way to Thunder Bay, which seems to be the place of origin for many disputed Morrisseaus. At this point, Kastner’s documentary becomes a more wrenching sort of true crime thriller, taking a deep dive into Morrisseau’s troubled later years and his involvement (which might’ve been complicit) with a bunch of hucksters, including some family members and a prolifically dangerous career criminal, who wanted to profit off his name as an artist. Far removed from the Toronto courthouses where the legitimacy of Hearn’s Morrisseau is being disputed, a far more tragic and sickening abuse is taking place that plays into a larger point Kastner is trying to make with his film on the whole.

While no one in Kastner’s film comes out directly and says it, this is a story about the money to be made in fine art and those who get trampled and abused in the name of profits. Buying an expensive painting is rarely about the art itself these days. It’s usually just another item in an investment portfolio for wealthy elites who trip over one another and pay exorbitant amounts of money for a chance at something that will increase in value over time. The artists themselves – many of them long since moved on from this world – rarely see any of these profits. There Are No Fakes is, on one hand, an almost satirical look at a bunch of well-to-do white people with plenty of money to burn and the luxury of being able to carry out such disputes in a court of law batting over the authenticity of a piece of indigenous art. To some degree it’s revealed that even if Hearn’s Morrisseau is a fake, it’s still, technically, a piece of indigenous art. The parties going to court levy charges of slander and racism while carrying out underhanded propaganda wars against one another, with Hearn taking the brunt of the nastiness. But once Kastner pulls back the curtain to reveal what’s really going on with the disputed Morrisseau, There Are No Fakes becomes a searing and soul crushing takedown of a form of late capitalism that benefits the rich, but preys upon the vulnerable, marginalized, and impoverished. The plaintiffs and defendants in a case like this can scream all they want about how such a case is about principals, integrity, and reputation, but it’s really about preserving wealth, power, and status above the rights and well being of others.

Outside of a small handful of dramatic recreations, Kastner sticks to the hard facts and conflicting viewpoints that make up his film’s realistically convoluted narrative. There Are No Fakes is a relatively straightforward documentary about a case so complicated that it would make any seasoned filmmaker’s head spin. It’s an excellent film about a messy situation where nothing is ever truly settled, some people get severely hurt (emotionally and physically), and everyone has egg on their face by the end whether they deserve it or not. There Are No Fakes is the best cautionary tale out there about the downside of becoming a player in the art market, but it’s more poignantly and powerfully a highly detailed, respectfully drawn takedown of numerous broken systems at the same time.

There Are No Fakes opens in Toronto (AGO Jackman Hall), Vancouver (Vancity Theatre), and Calgary (Glenbow Gallery) on Friday, June 14, 2019. There will be a Q&A with Jamie Kastner and the film’s subjects on the opening night screening at Toronto’s AGO. It screens in Thunder Bay at Thunder Bay Art Gallery on June 21 and 22, and opens at The Hot Docs Ted Rogers Cinema in Toronto on Friday, July 19.

Check out the trailer for There Are No Fakes: