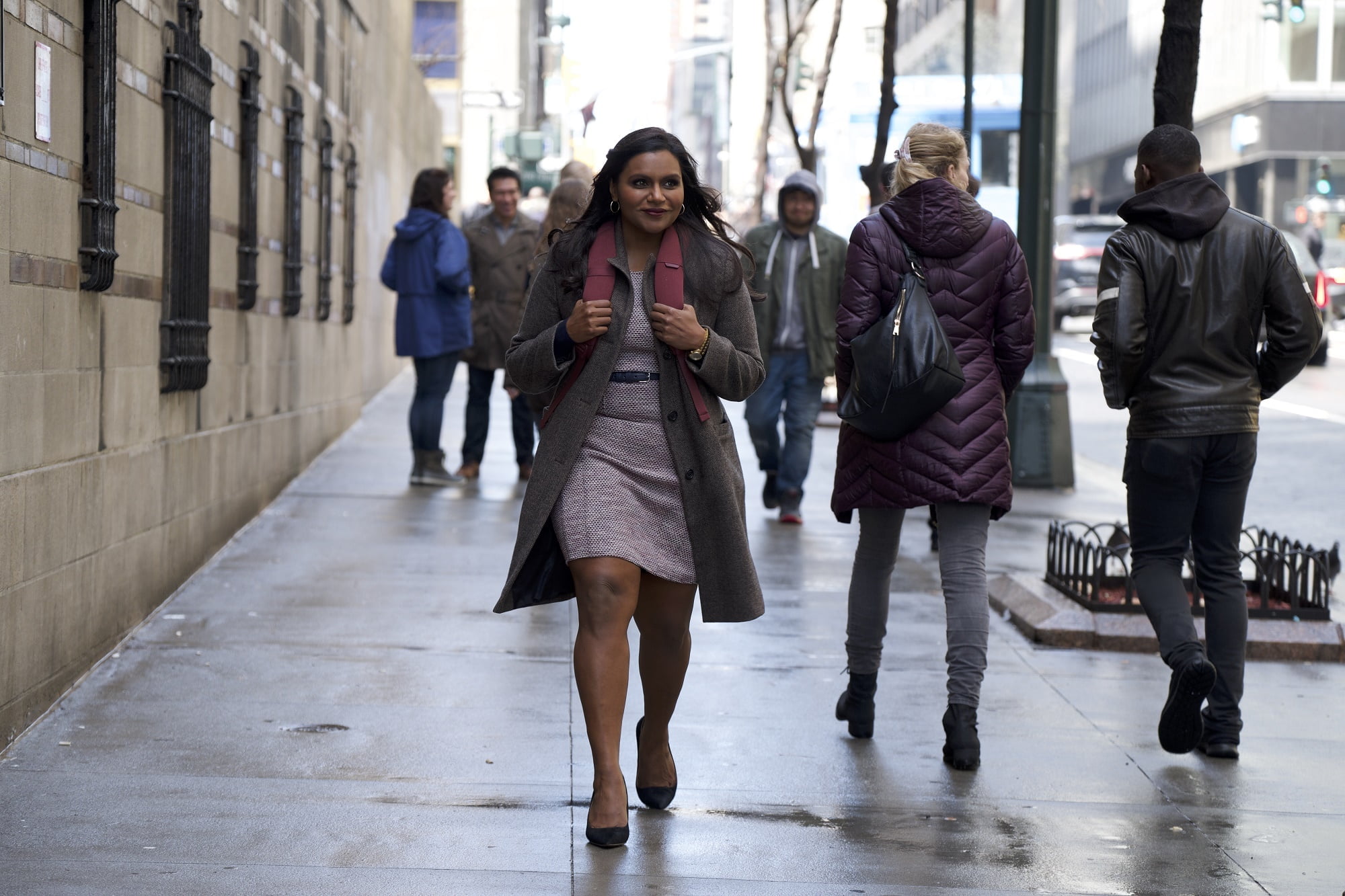 Appropriately candid and righteous, but somewhat lacking on the whole, the showbiz comedy Late Night has a great concept and a well honed social and political viewpoint that would work better if there was some added depth and nuance. The overall situation and the trials of the characters in play are consistently fascinating, but Late Night is a film about equality that’s curiously thin in that aspect when it comes to character development. While it’s admirable and long overdue to have a story built around dismantling the predominantly white and male writing rooms that have been the scourge of comedy for decades now, Late Night forgets to give one of its two main characters much to work with in terms of conveying that message. It’s even more strange is that the character in question is the one that screenwriter and co-lead Mindy Kaling has given herself. It all stays on the right and just track, but there’s something off about Late Night that should’ve been fixed in rewrites.

Back in the 1990s, former stand-up comic Katherine Newbury (Emma Thompson) made history by becoming the first female late night talk show host. For years she was chat show royalty, but now she’s skating on thin ice. The show – which Katherine’s ailing, but loving husband (John Lithgow) bluntly states hasn’t been funny for years – is on the chopping block due to declining ratings and the host’s inability to book buzzworthy guests that would appeal to both younger audiences and the network’s hard-charging new chairwoman (Amy Ryan). Katherine is looking to shake things up with her writing staff, made up entirely of white dudes who went to Ivy league schools or nepotism hires that she never interacts with before, during, or after shows. Katherine tells the show’s head writer to hire a woman, despite not really liking female writers.

Enter Molly Patel (Kaling), an eager younger woman new to New York City who’s only dabbled in stand-up and previously worked in a chemical plant. Molly (through a hilariously convoluted explanation) parlays her winning of an essay contest into a chance to interview for the job. Seeing as she was the only woman to apply, Molly is hired almost on the spot and joins Katherine’s team. Almost immediately, Molly’s new co-workers assert their dominance, and she feels inadequate about her prospects for the future, despite being a fan of Katherine’s and loving comedy in general. Similarly, while Katherine finds Molly’s candor and honesty to be an asset to the writing team, the new writer’s suggestions might be forcing the aging host into leaving a complacent comfort zone that took decades to build.

Late Night excels at setting the stage and giving viewers a somewhat brutally realistic depiction of what a writer’s room looks like on one of these shows. They’re packed to bursting with highly competitive, smartassed people who’re only barely willing to help each other out to better the show they’re working on. Everyone is burnt out and constantly in fear of losing their job at a moment’s notice. No one seems to like being there (except for Molly), but they all like the prestige and ego boost that comes from working on the show. They resent having their senses of humour questioned on a daily basis by a host that doesn’t want to listen to any new ideas about how to right the ship, from Molly or anyone else. Most importantly and obviously, they’re woefully inequitable when it comes to the representation of women and people of colour. One can tell immediately that Kaling, a comedy veteran in front of and behind the camera at this point, has been through many of these situations in the past and is keen to pull back the curtain on how difficult it can be to create a funny television show from a woman’s perspective. To her credit, it’s one of the most honest and unvarnished depictions of backstage politics in quite some time, and thankfully Late Night manages to remain funny without drifting off into self-importance or bogging itself down in minutiae.

While Late Night is built around a somewhat classical, crowd pleasing story of an ice queen who has her heart melted and is reminded of how strong and capable she is, Thompson’s character is fascinatingly three dimensional. Kaling’s script traces Katherine’s decline from progressive stand-up to complacent, obstinate host rather brilliantly. There are always flashes of the vibrant woman and performer that Katherine used to be that bubble to the surface, but in the present she mostly seems exhausted. Troubles at home with her husband are certainly compounding matters, but the tender moments shared between Thompson and Lithgow nicely showcase how that relationship is the only thing that still gives Katherine some sort of emotional catharsis. She proclaims to be a feminist, but she generally looks down upon women for not measuring up to her standards of femininity, coming off as nothing more than an enlightened hypocrite. Thompson seizes upon all of Katherine’s contradictions and inner turmoil expertly, emerging as the film’s biggest asset. 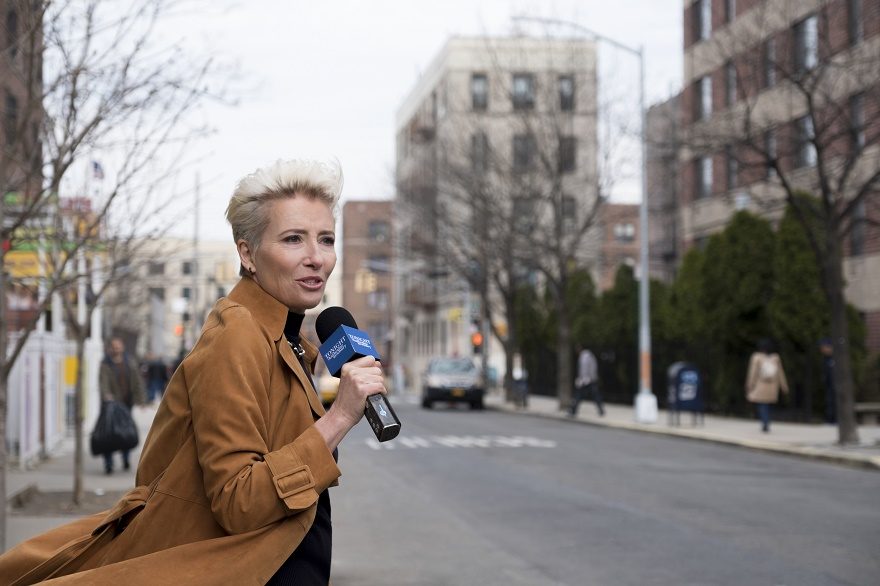 One would expect Kaling to place Molly at a similar level of character depth to Katherine, but the biggest shortcoming of Late Night is that it never once attempts to make the two women into equals or believable colleagues. All that’s known about Molly is that she’s new, eager, inexperienced, won an essay contest, her father died of cancer, she has some family in the city (none of whom are developed and only one of which is ever seen, often without much explanation), she studies all of Katherine’s past performances to get ideas on how to revive the host’s career, and she’s putting on a DIY benefit show that she’s really proud of. None of these traits are satifstingly explored, and they’re all left to dangle in the air in place of actual depth. She starts flirting with one of her fellow writers, butts heads with the guy in charge of the monologue, and strikes up a thinly drawn kinship with Katherine, but there’s not much to Molly as a person. None of these aspects of Molly’s character are ever explained in great detail, often limiting her successes, failures, and traits to single sentence explanations, or flatly staged scenes that never go anywhere interesting. She’s an everywoman, but Late Night shockingly struggles when it comes to depicting Molly as someone the audience can fully embrace and understand. One of the leads is a strongly realized, deeply flawed human being. The other is a sketch of an ideal human being.

This lack of development is especially troublesome in how Late Night wants to have its cake and eat it to, by depicting writer’s room as being both a breeding ground for inequality and a meritocracy. Almost immediately upon her arrival, Katherine puts down Molly and says that she hasn’t earned the right to question the decisions of a room full of writers with decades of experience between them because she hasn’t contributed anything of note. It’s a correct statement, but it doesn’t jive with anything Late Night wants to say about inequality in the workplace because Molly is so thinly drawn and the message is so bluntly delivered. Such a statement would carry more sting if we knew anything about Kaling’s character. It’s never clear if we should be recognizing Molly as a genius or empathetically following her on a path to being a better writer.

Molly isn’t a comedic dynamo, she’s just another cog in the machine. Even the lion’s share of soapboxing moments speaking to the role of female performers and writers in entertainment (of which there are many, all of which contain a multitude of truths that do need to be heard, regardless of who’s delivering them) go to Katherine, suggesting that the host already knows everything. Molly has precious little to add to the overall conversation outside of her enthusiasm, cultural perspective, and jokes. Kaling’s performance is fine, but she’s also resting on the kind of deadpan obliviousness that has defined her career to this point. I also wonder whether or not a good chunk of Molly’s backstory is somewhere on the cutting room floor or if this was initially written as the pilot for a larger, more eventually fleshed out series. There’s a strong feeling throughout Late Night that Kaling, the established writer off screen, has more in common with Katherine than she does with Molly, which is the complete wrong approach. Katherine represents the old, white establishment, and even at the end of the film, not much has changed on the whole outside of the older woman being slightly more equitable and friendly.

In spite of the lack of character depth, Kaling’s otherwise funny and informed screenplay strongarms Late Night into respectability and some degree of satisfaction with its perceptiveness. Director Nisha Ganatra (a veteran of television sitcoms) doesn’t bring much to the table in terms of comedic or dramatic energy, and visually it’s as perfunctory and competent as films tend to get. Late Night and its overall success rests almost entirely on Thompson and Kaling, and it’s a testament to their talents that the film works and its message of workplace inclusiveness resonates as well as it ultimately does. Late Night’s charms might only be skin deep, but there’s a distinct likability and pointedness that can’t be overlooked. It’s suitably rousing and frequently funny, but there’s so much more outside Kaling’s margins that could’ve been explored further. It’s a good movie that could’ve been exceptional.

Check out the trailer for Late Night: