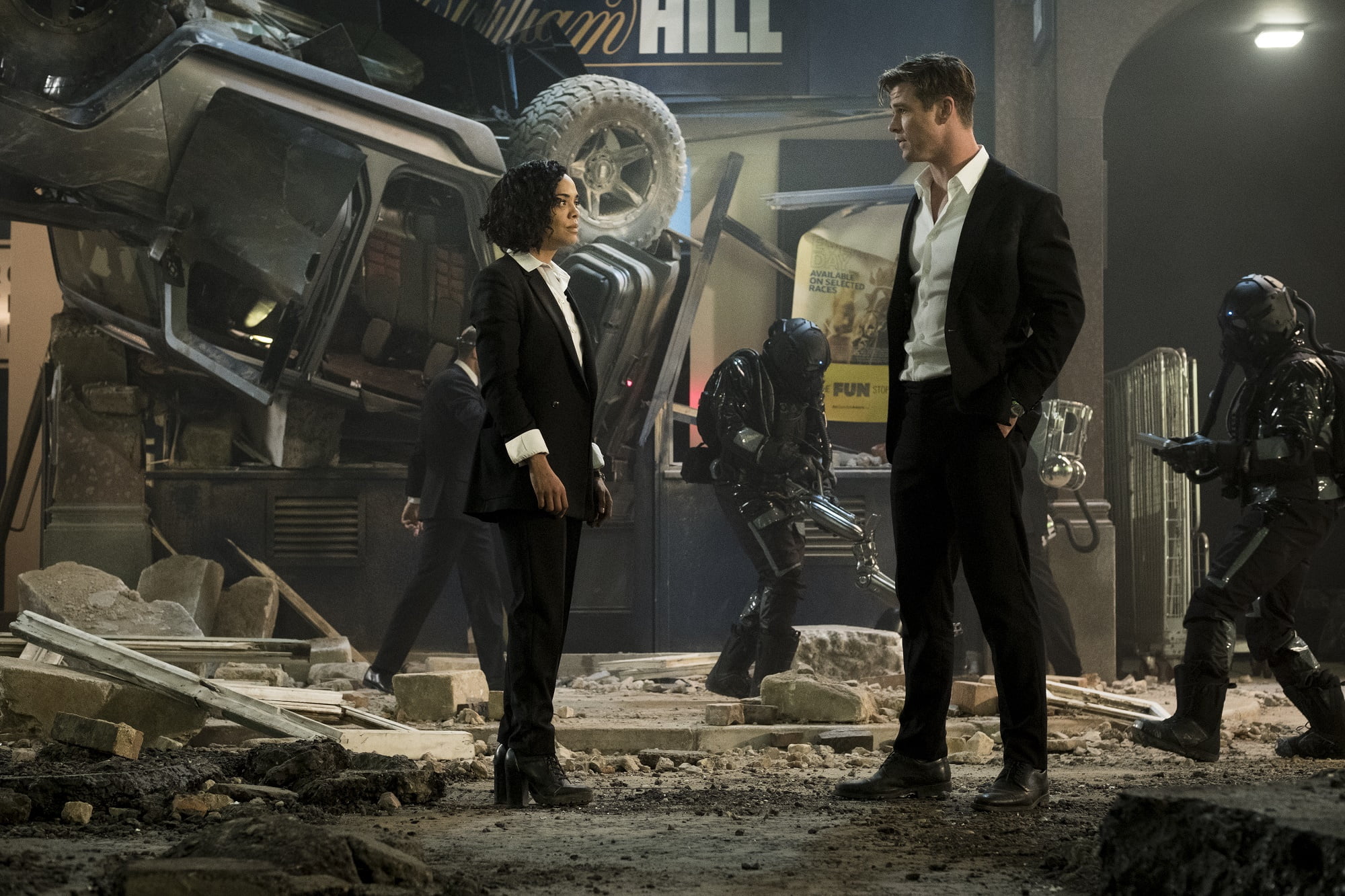 Men in Black: International isn’t good by any real stretch of the imagination, but it’s not the kind of bad movie that’s worth getting worked up over. It’s not even the kind of lacklustre Hollywood blockbuster sequel or spin-off that can pitch critics and audiences into fits over its cynical production and construction. No, Men in Black: International is just another forgettable entry in a franchise that hasn’t been memorable, novel, or good for over two decades. Despite a new cast and director, it’s the same old MIB, and no one thought to make anything punchier, wittier, or more inspired. I would say that I don’t know why anyone would bother making something like Men in Black: International, but that would be a lie. The three previous entries have earned over a billion dollars combined, despite none of them being particularly well received outside of the original. It’s clear that I can’t dissuade anyone at this point from seeing Men in Black: International, so I’m not even really going to try, which is a perfect reflection of the film itself.

After she witnessed her parents getting their memories erased by the Men in Black following a run in with an extraterrestrial, science nerd Molly (Tessa Thompson) spends most of her adult life trying to track down the highly classified intergalactic police force. She’s eventually successful in infiltrating one of their headquarters and is offered a job on a probationary basis for her troubles. Bureau chief Agent O (Emma Thompson) sends the newly christened and suited Agent M to assist with a situation in London. M strikes up a professional partnership with the dashing, arrogant, and dimwitted Agent H (Chris Hemsworth), and the two are thrust into the middle of a battle with various baddies and a mole planted within the Men in Black for control of a superweapon that can wipe out entire galaxies with a single pull of the trigger.

Watching Men in Black: International is flabbergasting, but not in ways one might not think when talking about bad movies. I had a lot of questions throughout Men in Black: International’s plot packed, but substance free two hour running time (which somehow feels three times as long). After the last two sequels failed to recapture the magic of Barry Sonnenfeld’s 1997 original (and the second entry nearly killed the prospects of any sequels at all), who was really excited to dip back into the well? Despite trying to give the franchise a new look, new cast, new director, and a globetrotting storyline, why does Men in Black: International have no distinct personality of its own to set itself apart from its predecessors? Everything here looks good and the performances aren’t bad, so why isn’t any of this funny, whimsical, suspenseful, or even generally entertaining? Why does the entirety of Men in Black: International feel like it can’t justify its own existence even on a commercial level? 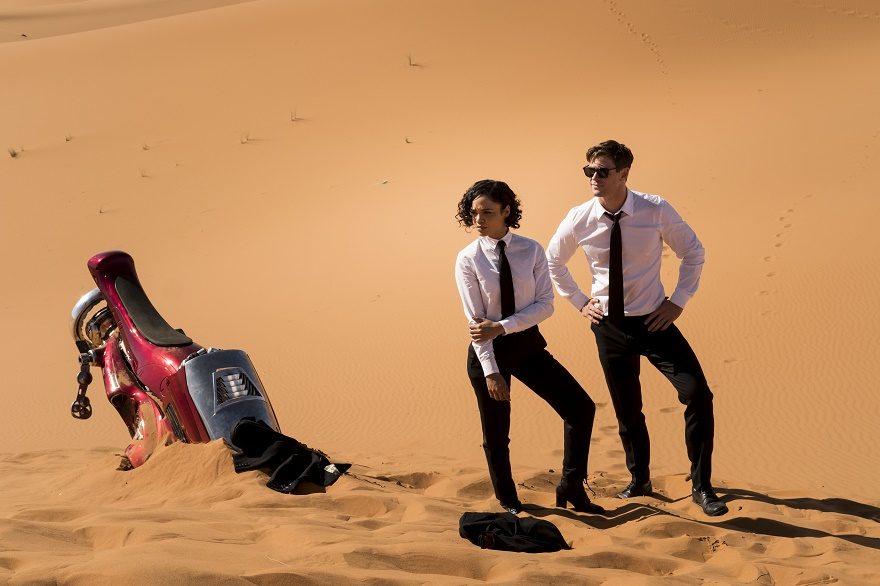 Director F. Gary Gray (The Fate of the Furious, Straight Outta Compton, Friday) takes the reins from previous franchise steward Sonnenfeld (who remains on as a producer), but one would be hard pressed to see a difference in style. It’s all a bunch of slick looking visual effects, snappily dressed heroes firing off futuristic guns, a plethora of lovingly crafted aliens to act as background colour, and a handful of effective, if highly illogical and mostly forgettable set pieces. He’s doing what he can to make it look important and keep it all in constant motion, but it’s not enough to overcome the material.

If the script from Matt Holloway and Art Marcum (Iron Man, Punisher: War Zone, Transformers: The Last Knight) isn’t dumping a bunch of plot twists that only exist to keep the movie going from scene to scene, Gray has to fill the void with an action sequence. The action isn’t bad, the plot is serviceable enough (minus the grating throughline of sussing out the MIB mole, which causes the entire cast to overact in a bid to sell it at all), and there’s some energy and effort on display, but all parties involved behind the camera have crucially forgotten to give the viewer a reason to care about any of this in the slightest. Characters can be summed up in single words and phrases, and none of them are particularly likable, sympathetic, or interesting except for a diminutive warrior alien dubbed Pawny, voiced by Kumail Nanjiani, who’s handily the film’s biggest standout in terms of entertainment value (but be prepared to wait almost a full hour to do anything noteworthy). After pledging his loyalty to Agent M after the death of his queen, Pawny makes it his mission to serve his new master in her quest to save the universe and, by extension, the film that’s built around them.

Hemsworth and Tessa Thompson are a fine pair, and their chemistry and comedic timing constantly lifts Men in Black: International into a higher bracket of respectability than it would’ve achieved without them. Hemsworth continues to poke fun at his pretty boy image as the once great agent who fell off in competency following a legendary brush with an alien horde alongside his former partner and current boss (Liam Neeson). Tessa Thompson does a fine job conveying M’s strength and eagerness in good balance. It’s a shame that they don’t have better material to work with. The script to Men in Black: International is so laboured and exhausting (right down to its forced cracks about male and female equality, which are the most hollow and useless in any film this year thus far) that it forgets to give either of them anything genuinely funny to say. Any chuckles Men in Black: International ekes out – and believe me, I wouldn’t call them laughs – are purely a result of the fact that Thompson and Hemsworth make this look easy. Men in Black: International owes most of its success to them and Nanjiani, but it’s so unengaging and passive to watch that I couldn’t care less if they all get a crack at the franchise again in the future.

Men in Black: International builds to an unsatisfying, somewhat head scratching finale where the film suddenly realizes that, outside of the “who’s the mole?” plot, it forgot to introduce an actual villain to fight (represented by a woefully underused Rebecca Ferguson as a ruthless alien arms dealer). The film starts to give up in its final twenty minutes, but that would mean more if Men in Black: International was trying all that hard to begin with. Lots of obvious thought was put into the look and casting of Men in Black: International, but everything else about this unnecessary sequel is entirely perfunctory. It’s the kind of film that exists solely to fill a programming slot with a valuable intellectual property. People will go see it, but none of them in this or any other galaxy will ever say that Men in Black: International is their favourite movie. If they do, they might be an alien.

Check out the trailer for Men in Black: International: