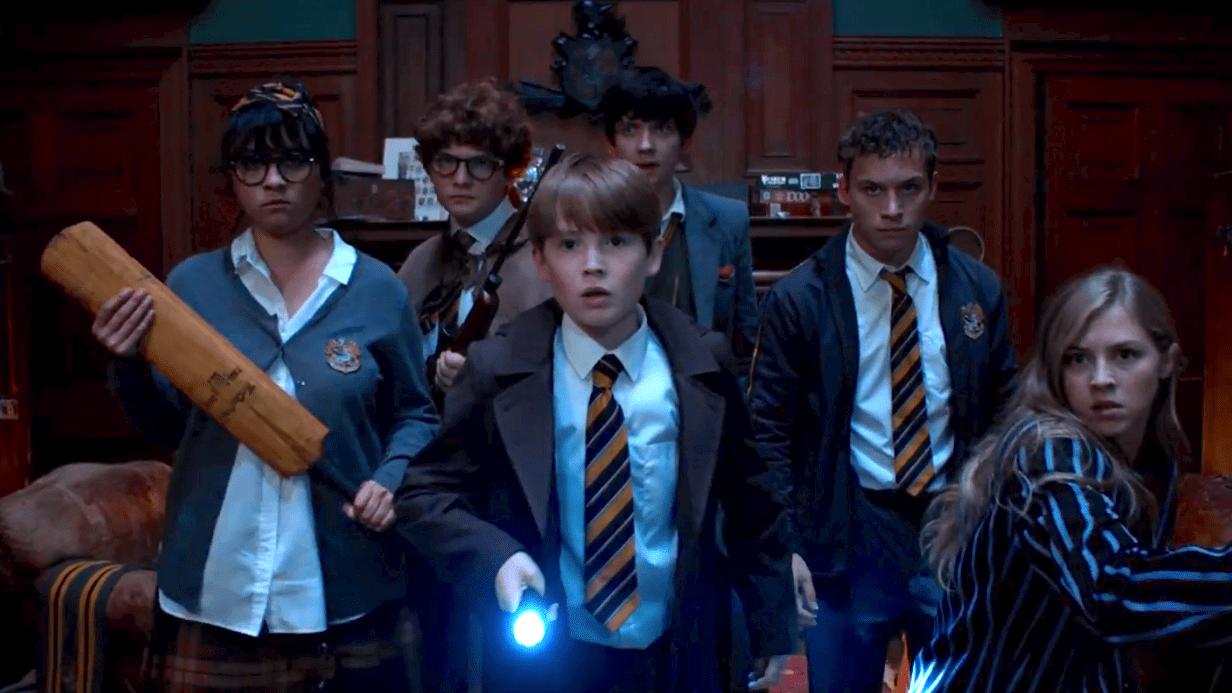 Slaughterhouse Rulez, an entertaining, albeit slightly disappointing British teen horror-comedy, comes with a pedigree that makes one surprised that it skipped Canadian cinemas altogether and was quietly shipped off to DVD and VOD. It’s the first feature to come from Simon Pegg and Nick Frost’s newly formed production company, and both of the frequent collaborators turn up for supporting roles, with the rest of the cast populated by notable and capable figures both young and old. Despite being a throwback to the somewhat disreputable low budget horror flicks and teen movies of the 1980s, Slaughterhouse Rulez boasts a considerable amount of production value that suggests it wasn’t a particularly cheap film to make. And yet, upon its release on Halloween last year  in UK cinemas, Slaughterhouse Rulez was greeted with resounding apathy and middling reviews, debuting in eleventh place during its opening weekend at the box office. It fared even worse in the United States, where its distributor, Sony Pictures, gave it a token day-and-date theatrical release onto only ten screens in the entire country last month. In the U.S., Slaughterhouse Rulez’s entire theatrical run grossed just over $4,000 in total.

But with all that said, Slaughterhouse Rulez is assuredly better than its already lowly reputation. It’s actually a good bit of fun if one’s in the mood for some teen movie shenanigans with healthy sides of monster movie tropes and ecological subtext. One shouldn’t go into the latest Pegg and Frost movie expecting to see something on the level of an Edgar Wright film, or even expect the films young cast to be starring in the next Attack the Block. What they can expect is a reasonably serviceable B-movie that’s rough around the edges, but more entertaining than not.

When his mother has had enough of him sitting around the house all day and playing video games following the death of his father, teenager Don Wallace (Finn Cole) is shipped off to the ominously named Slaughterhouse boarding school in the English countryside, where their motto translates as “Through Slaughter to Immortality.” He predictably has trouble fitting in – even with his affable, too-cool-for-school, snuff snorting roommate (Asa Butterfield) – and he starts miserably waiting for his two year stint there to come to an end. But once he starts settling in, Don starts to realize that something is off about the school beyond the entitled rich bullies that populate the grounds and the neurotic, ineffective adult staff. In the “forbidden” woods near the cricket pitch, a large scale fracking operation has opened up a sinkhole that’s not only polluting everything around the school with poisonous gasses, but has unleashed a bunch of subterranean monsters that’ve lurked beneath the grounds for centuries.

Director, co-writer (with Henry Fitzherbert), and Kula Shaker lead singer/guitarist Crispian Mills (who previously helmed the Pegg starring horror comedy A Fantastic Fear of Everything) is a big reason why Slaughterhouse Rulez stays so captivating. The film is stylish and snappy, motoring along and looking rather gorgeous in the process. There are plenty of long takes, stunning wide shots, clever edits, and cheeky framing, all delivered with a boundless sense of energy that papers over most of the story’s shortcomings. Even though Slaughterhouse Rulez is never outright hilarious as a comedy, scary as a thriller, or perceptive as an obvious metaphor for capitalist greed and privilege, Mills makes sure everything plows ahead with a sense of purpose. It’s relatively threadbare, but it’s confident, and that goes a long way when it comes to retaining a viewer’s attention. 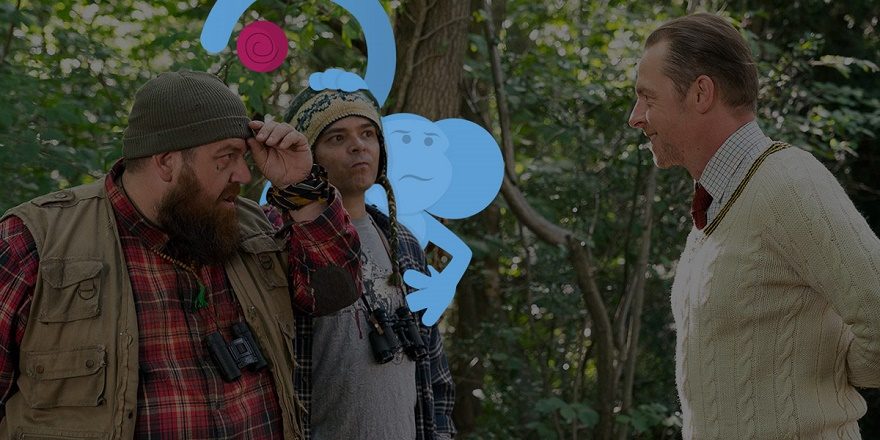 Another key factor in Slaughterhouse Rulez saving itself from the gaping maw of forgettable mediocrity is the cast, who all do fine jobs in roles that range wildly from overwritten to thankless. Cole and Butterfield are likable leads and have great chemistry, with the latter clearly relishing the chance to break away from the squeaky-clean parts he’s been typecast into as of late. Pegg doesn’t have much to do as Don’s pining, heartbroken housemaster, who spends more time trying to Facetime with his doctor girlfriend in Africa (a big name cameo, literally phoning in her performance, probably as a favour to Pegg) than he does keeping his charges safe. Frost has even less to do as a perpetually tripping drug dealer and eco-activist with metallic grills and a speech impediment living in the woods behind the school. Hermione Corfield manages to turn her role as Don’s crush into something stronger and more interesting than the character has been written on the page. Michael Sheen pops up for a suitably over-the-top turn as Slaughterhouse’s flamboyant, duplicitous, and oblivious headmaster. Even side characters like Kit Connor’s perpetually picked on and snarky nerd and Tom Rhys Harries’ resident dickhead fascist-in-training are fascinating to watch. They match Mills’ energy and enthusiasm for the material perfectly.

It’s the material itself that needs some work, however. Slaughterhouse Rulez starts off with a lot of cheek and promise, cranking up its musical score that sounds straight out of a disaster movie while so unsubtly hinting that it’s going to turn into a horror film at some point that the film goes from silly to annoying and back to silly again in a matter of minutes. But then Mills kind of forgets that there’s supposed to be some degree of suspense while juggling the standard teen movie beats (new kid in school, friends keeping secrets, bullying, crushes on people “out of one’s league,” etc.) and the lengthily described fracking subplot. The jokes are rarely laugh-out-loud funny, the plot machinations are pedantic, and one begins to wonder if Slaughterhouse Rulez is ultimately worth all this effort and showmanship. By the time the monsters arrive (nearly an hour into the picture), the tonal shift is so well telegraphed that everything to follow comes across as a foregone conclusion, building to a climax that curiously feels either like the result of reshoots after poor test screenings or rewrites that were done on the fly.

There’s some impressive gore effects and lovably old school practical creatures (at least on the ones that can be seen without being obscured, anyway), but it doesn’t fully make up for a film that energetically runs in place for almost a full hour without doing anything of note. Slaughterhouse Rulez is so dead set on laying out too many characters and an overabundance of plot that it never fully relaxes enough to be the thrill ride it so clearly wants to be. It’s all fine, but also a missed opportunity, exemplified best by the fact that Pegg and Frost share less than thirty seconds of screen time together and it’s spent on the film’s lamest, laziest throwaway scene.

The overwhelming amount of detail of Slaughterhouse Rulez doesn’t make it a great film, but it’s those little touches and Mills’ madcap sensibilities that make it eminently watchable. Slaughterhouse Rulez is a cinematic sugar rush, with its messages about bullying and ecological destruction acting as the nutritious peanuts smothered under mounts of nougat, caramel, and chocolate. Maybe it’s the kind of film one has to be in the right mood for. I was sufficiently satisfied by whatever it was Slaughterhouse Rulez was giving me, even if I knew it wasn’t much and that could’ve been far better. Maybe it was the diminished expectations that came with seeing it long after it came and went from overseas cinemas with a whimper. I didn’t expect much from Slaughterhouse Rulez, and for better and worse, it delivered on those expectations.

Slaughterhouse Rulez is available on DVD and VOD in Canada on Tuesday, June 18, 2019.

Check out the trailer for Slaughterhouse Rulez:

I loved this movie. Ive watched it twice already. It had everything I love. Clever script, great performances. I would rate it a ten out of ten