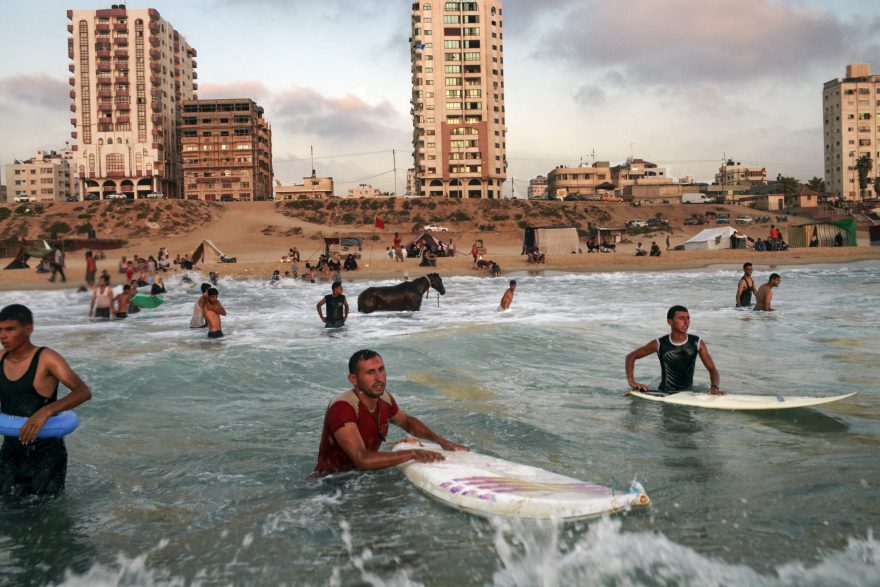 Gaza, an equally heartwarming and heartbreaking documentary by Gary Keane and Andrew McConnell, looks at the hopes, dreams, frustration, and sadness that encompasses everyday life in one of the world’s most isolated places. Keane and McConnell embed themselves in the contested, locked off titular strip of land between Israel and Egypt and spend time with everyday people struggling to survive and keep positive in the face of overwhelming restrictions and global apathy. It’s not a travelogue, nor an exposee, but rather something far more insightful and humane. Gaza is a film that quite literally gives voice to the voiceless: those caught in the political and military crossfire of one of the world’s deadliest, most contentious, and longest human rights crises.

The Gaza Strip is home to seven million people, despite the fact that the area in question is only twenty-five miles long and seven miles wide. Since Hamas took control of Gaza in 2007, Israel closed off their borders. Egypt followed suit. Escaping via the bordering Mediterranean Sea is basically a suicide mission for anyone brave enough to appempt it. The entire population of Gaza is stranded and cut off from the outside world. There’s no drinkable water, food is hard to come by, the population of fish in the once plentiful sea has dwindled to almost nothing, and there’s no power outside of what can be produced using generators. It sounds like hell on Earth, and while none of the people Keane and McConnell would ever say that life in Gaza was ideal, the film they’ve made is one that speaks to the resilience of those who remain.

Gaza isn’t interested in talking to politicians, humanitarians, or members of the political opposition. Keane and McConnel want to use their status as outsiders in a place most foreigners find inscrutable to profile those simply looking to make a living and stay sane in an isolated location with few tangible prospects for a better future. There’s a young boy with ten sisters and three brothers from the same mother who dreams of being a boat captain, a woman of Bedouin heritage who wants to bring fashion to the women of Gaza, a cabbie who remarks on the changes and decline in positivity that he’s witnessed since the last war broke out there in 2014. There’s someone who witnesses first hand what happens to those who attempt to resist and protest the border closings, a rapper, a lifeguard, a theatre director, and a man with forty children.

All of them live in a settlement that’s in perpetual disrepair with almost no outside aid that could make any tangible or lasting difference. They’re all frustrated, but they’ve found ways to cope and get through every day to the best of their abilities. They laugh to keep from crying. They’ve found means of self-expression that helps them to convey their true feelings, even if no one outside of Gaza can hear them. Almost all of them – if they’re even asked by the filmmakers, who remain off camera and edited out of their film – think that reconciliation is impossible, and that even if an agreement was reached to absorb the strip into another country, make it an independent nation, or allow migration that opportunities for a brighter future would remain as limited as they currently are at this moment in history. Almost all of the people profiled in Gaza think that moving on is impossible, so the film in turn serves as a reflection of people doing their best to make the most of an awful situation.

All of the people profiled by McConnell and Keane are well spoken, articulate, and impassioned, but one subject profiled early on outlines precisely what the filmmakers want to do with Gaza. A young woman born in the late 90s who practices to become a world class cellist says that she’s sick of hearing international sympathies for the plight of Gaza’s people, and she would much prefer to foster some sort of understanding that could lead to meaningful changes instead of just throwing people another lifeline for a few more days to live. Once McConnell and Keane – who gorgeously photograph the land and people with both an eye for the beautiful and the ugly – start to make connections between their subjects around the halfway point, the words of this young woman come into sharper focus and resonate louder than they did during the film’s set-up. Gaza is a small world where people rely on each other for support. They need more help than they can provide for each other, and they are more than deserving of it. Like so many other global crises that are often dealt with through thoughts, prayers, political backroom bickering, and bureaucratic red tape, the people of Gaza need to be understood and listened to outside of the broad brushstrokes the area has been painted with in the media, and beyond the whims of the regime currently occupying the territory.

Keane and McConnell have outlined and paced their profile of everyday life in Gaza in a clever, assured way, even if they are relying sometimes too heavily on grand dramatic reveals. However, this creation of a greater dramatic investment for the audience in no way skews the reality of the situation at hand. The way the filmmakers have framed the lives of their subjects doesn’t slant their courage or character. In many ways, the more dramatic flourishes of Gaza are the most effective ways of countering the ways the region and its issues have been stereotyped. It’s a purposeful film packed with loving people making the best of an unlovable situation.

Check out the trailer for Gaza: