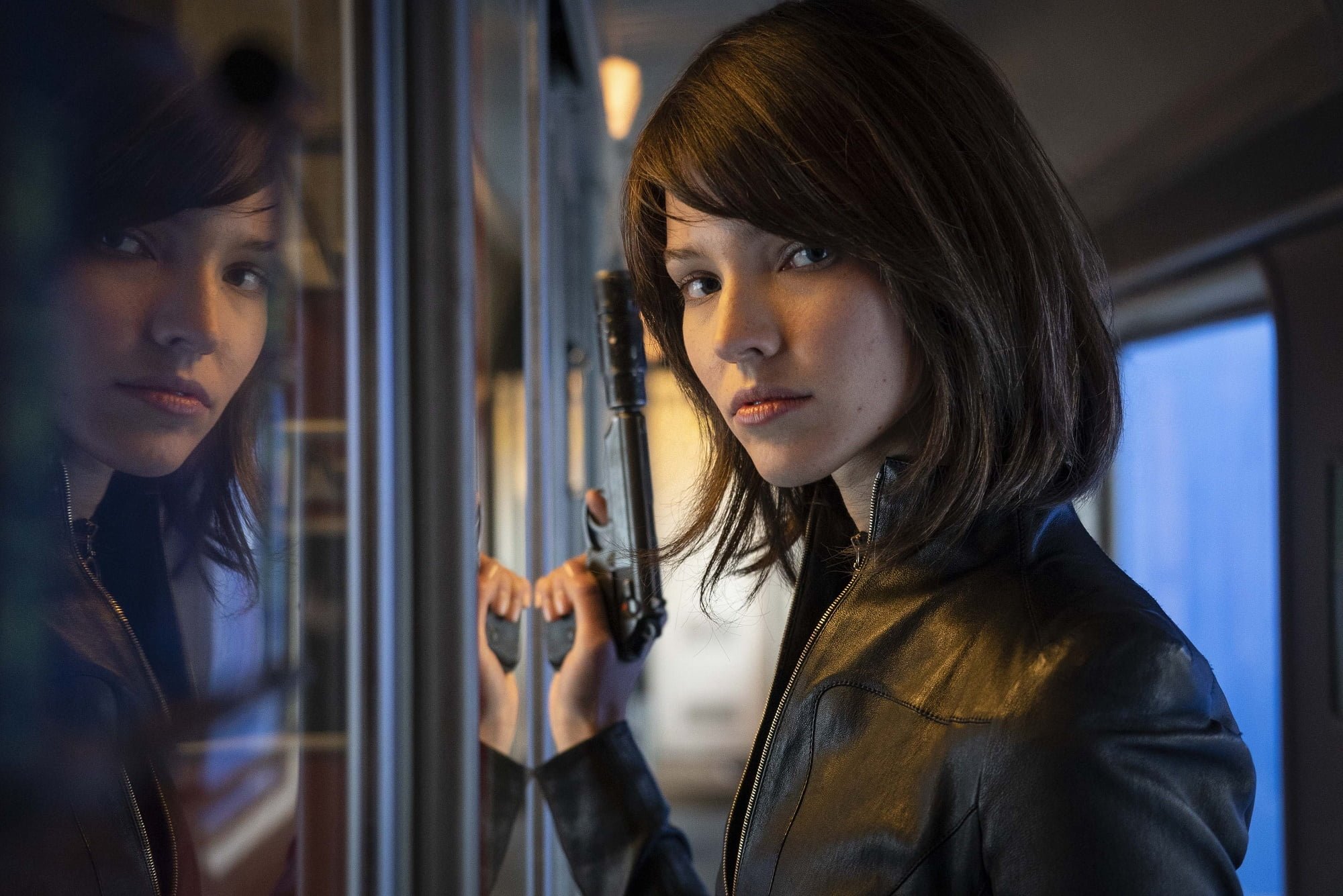 If the ongoing whirlwind of scandals that surround his private and business life aren’t enough to sink the career of once lauded French filmmaker Luv Besson for good, the laughable, shoddy ineptitude and pervasive creepiness of his latest directorial effort, Anna, should seal the deal. A jaw-dropping failure on every meaningful level possible, Anna is the type of film produced by a filmmaker who has run out of things to say and has instead doubled down on their own worst impulses, becoming a cliche of their own work in the process. Besson – who’s currently facing down several sexual assault allegations AND is in the middle of watching his studio flounder into bankruptcy – clearly sees Anna as brainless, shoot-’em-up comfort food. The problem is that Anna is so specific to Besson’s unique tastes, kinks, and opinions that it won’t please anyone other than the person making it. If the film in question were a piece of art, that would be a compliment, but Besson regards Anna as elevated trash, when it’s actuallys nothing more than a used up piece of chewing gum covered in dog shit on a steaming hot sidewalk in the summertime.

I can’t start talking about the ludicrously overstuffed and incomprehensible plot of Anna without first mentioning that Besson (who also penned the screenplay, leaving no one else to blame for the film’s ultimate failure) is told with a hilariously stupid, shifting timeline. Every fifteen minutes or so, a title card will pop up to shift us to “Five Years Later,” or “Two Weeks Earlier,” or “Three Years Earlier,” or “Two Years Later.” Forget the fact that Besson is leaning too heavily into this in a bid to make his script sound smarter than it is. The real cardinal sin of Anna’s overplotting is that the story constantly relies on characters knowing information that they couldn’t possibly have known in any logical way before the reveals happen in the first place. It reeks of a script that was originally traced out across a linear timeline (except for one flashback early in the movie and the opening scene, which kind of makes sense), but was chopped up by Besson to make it seem flashier. It’s stupid, and when the final twist hit and another one of these title cards came up, I openly started a slow clap in the theatre. Anna can’t keep track of its own spy movie machinations with any degree of conviction or believability, so why should anyone in the audience care?

Well, Besson is counting on no one caring because Anna is nothing more than a violent, resolutely soft-core bit of bloodletting and juvenile titillation. Sasha Luss – a model by trade and training – stars as Anna Poliatova, a cleaned up junkie, matriochka doll salesperson, and chess prodigy who’s recruited by the KGB in 1990 to work missions undercover as – you guessed it – a model. Essentially forced into this line of work through a variety of circumstances, Anna becomes a valuable asset for her Russian handler (Luke Evans) and a sarcastic, tough talking CIA agent (Cillian Murphy) – both of whom desperately want to sleep with her, despite the fact that she has a live-in girlfriend (Lera Abova) – while her boss (Helen Mirren) remains skeptical about the young woman’s ability to handle herself in the field. The job takes a considerable mental toll on Anna, and she wants to get out of the spy game. She’s constantly warned that her only means of escape is on the wrong side of a bullet, but Anna uses her underestimated status as an intelligence operative and sexual prowess to pit the Americans and Russians against each other in a plot to live a normal life and gain some sense of freedom.

Besson (The Fifth Element, The Professional, Valerian and the City of a Thousand Planets) has always had a thing for casting models as his leading ladies, and with Anna his obvious desire to drool over a good looking, ass kicking woman comes back to bite him in the ass hard. Unlike models-turned-actresses like Milla Jovovich and Cara Delevingne who’ve toplined Besson films in the past, Luss is emphatically useless as a performer. Every line of dialogue or speech given by Luss doesn’t sound like they’re coming from a strong female character. It’s more like watching an anxious grade schooler forced into reading a university level textbook about nuclear physics to their class. Luss is so far from a natural at this that one might actually have to invent a new word that means something stronger than unnatural. But Besson doesn’t care that Luss sucks. He just throws her to the wolves, makes lascivious jokes about how bangable she is, and delusionally thinks that he can paper over the Grand Canyon sized hole at the centre of his already wafer-thin material with the help of the supporting cast and his editors.

He’s dead wrong. Almost no one in Anna gives a flying crapola about this film and rescuing it from the depths of failure. Evans gives the bare minimum for his performance, but emerges as the only person other than Besson who might be genuinely trying. Murphy can barely hide his contempt for this stuff, shouting or over-enunciating most of his lines with latter day Pacino aplomb, but with none of the campy charm. Mirren seems to have only signed up because they let her pick out her own wardrobe, but she still refuses to deliver a convincing Russian accent, which is baffling when one considers that she has credibly played Russians in the past. They can’t make Luss look any better than she already is, and it’s confusing to wonder throughout Anna whether or not Besson or the rest of the cast gave up on trying to help the film’s lead or they never bothered to begin with. 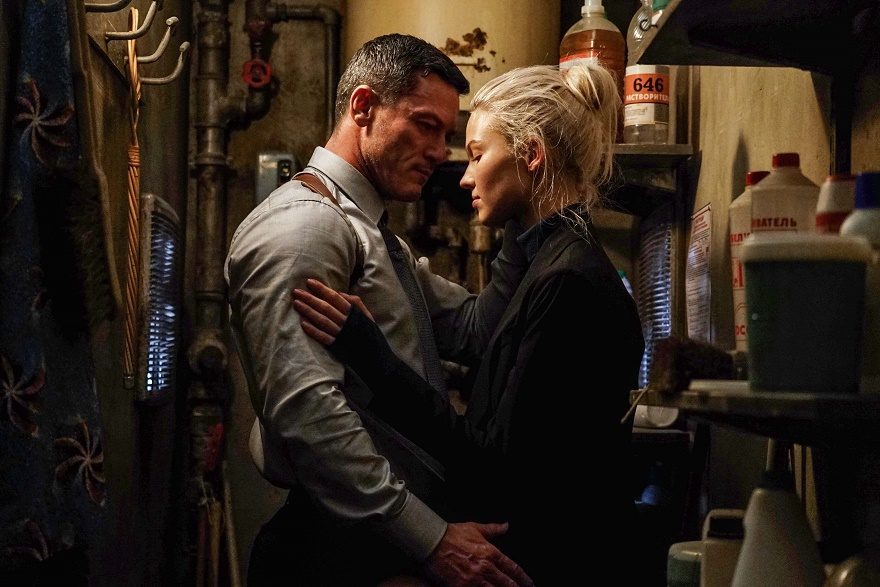 Anna is also as visually inept as it is dramatically unfathomable. For a period piece set in the late 80s and early 90s, Besson seemingly can’t tell a story where people don’t have constant access to cell phones or laptops that all look like they came from the early 2000s. One could also have a field day with the number of modern day cars that drive through the background of Anna’s exterior shots. As for the action sequences, they’re appropriately chaotic and feature one pretty decent kill (involving a torn off bar rail during a shootout in a restaurant), but Anna is almost always filmed from behind as a flailing mess of pleather and blonde hair in a laughable attempt to hide the fact that Luss isn’t doing any of this herself. The action is competent, but impossible to buy into, especially a rapid fire montage of brutality (all revolving around Anna laughably retrieving a variety of briefcases) that ends with the heroine strangling someone to death during sex to the strains of INXS’s “Need You Tonight,” which is both in poor taste and so painfully on-the-nose that it wouldn’t fly at a celebrity roast.

But let’s not mince words any more than we have to about Anna, because Besson himself cuts to the chase rather early. Anna – which feels undistinguishably like the eight bajillionth film Besson has made or produced about an hot, unstoppable killer woman – is about how Besson loves to fuck models. He doesn’t want to fuck them for their talents or their personalities. He wants to fuck them for their “assets.” When Anna is first hired by the KGB, Mirren’s character puts it best and most bluntly by describing Luss as a “fuckable” “honeypot.” Murphy later moans to Anna during an interrogation that “It must be tedious fending off men all the time.” A top member of the KGB brass wants to cut Anna loose because “pretty girls always cause problems.” There’s a relatively pointless scene with Anna on vacation with her girlfriend that forwards very little and really just exists as a scene to show chicks in bikinis.

It’s impossible to look at Anna outside the context of Besson’s previous work or the current allegations levied against him. All of this plays like a broken record stuck on the most annoying note. On a storytelling level, Anna is a brazen, borderline lawsuit worthy rip-off of the similarly grimy and useless Red Sparrow, but at least that film had some depth, good performances, and confidence. Anna is nothing more than a fuck-you from Besson to anyone who ever doubted him that’s so obvious and dunderheaded that notoriously cantankerous filmmaker Uwe Boll would tell him to chill the fuck out.

I’m sure that Besson thinks Anna is a story of female empowerment, but really it’s just his fantasies being writ large again with someone else’s checkbook. The only moment Anna meaningfully stands up to the men in her life comes when she batters a photographer, not because he’s an obvious creep, but because she made him late for an appointment. Not even when the film’s conclusion arrives has the main character done anything except create a broken shell game to earn her tenuous freedom. Luc Besson has long since stopped caring about women, and now audiences are forced to watch him live out his mid-life crisis on screen. There are plenty of jokes about how gorgeous women only want to fuck successful, powerful, wealthy men, and the constant insinuation that women only want power and money themselves. Anna masks itself behind the image of a female assassin, when it really hates the character and everything she should stand for. There’s no nuance or depth to Besson’s boldfaced hatred of women in Anna. It’s just an old man venting to anyone who’ll listen about how the women he made into stars have all ganged up to stab him in the back.

Besson, who frankly hasn’t made a great film since the late 90s, needs to stop. Anna reads from top to bottom like the confession letter of a bonafide creep. Anna has a few moments where it almost becomes watchable in a “so awful I can’t fucking believe this was made by human beings” sort of way, until one snaps out of it and realizes how catty, hate filled, and spiteful the whole thing is. Anna would be an awful movie no matter who made it, but the fact that Besson made it makes it almost too depressing to behold.

Check out the trailer for Anna: