In Toy Story 4, which hit theatres this weekend, audiences around the world will get acquainted with a very special character: Duke Caboom, Canada’s “greatest” stuntman. And unlike most Canadian characters, Duke isn’t merely a motorcycle riding toy designed to make jokes about hockey, maple syrup, and drawn out vowel sounds. The latest addition to Woody and Buzz’s constantly growing stable of plaything friends is a major part of the core adventure in Toy Story 4; one that was made with a lot of help from Disney and Pixar’s Canadian friends.

For years, Walt Disney Studios Canada has worked side by side with their American counterparts to try and inject a bit of Canadiana here and there, and the road to Duke Caboom started approximately three and a half years ago while Disney Animation Studios was working on the Academy Award Winning feature Zootopia. On that film, Greg Mason, the Vice President of Marketing for Walt Disney Studios Motion Pictures Canada, and his team were allowed to provide input on the inclusion of a Canadian newscaster character. They worked hand in hand with the filmmakers and animators to come up with the look of the character and provide casting choices. Thus, Peter Moosebridge – voiced by venerable newscaster Peter Mansbridge – was born.

While Pixar and Disney Animation are two separate streams working independently of one another under the same corporate umbrella, Mason, during a recent sit down in Toronto to talk about Duke Caboom, says that they pay very close attention to each other.

Pixar producer Jonas Rivera was a key player when it came to including a bit more Canadiana in their films, starting with Inside Out, where Riley, the main protagonist who has a lot of conflicting emotions swirling around inside her head, plays hockey. There are also jokes about a mysterious Canadian boyfriend and large map of Canada in one of the classrooms. While those were all nice touches for those paying close attention to Inside Out, Rivera was the one who mentioned to Mason and Disney’s Canadian division that they had something special in mind for Toy Story 4 and that it was time for an even bigger collaboration.

Daredevil Duke Caboom, who rides a sweet looking red and white bike adorned all over with maple leaves, was discarded by his Quebecois owner when it turned out that he couldn’t do all the cool stuff his commercial claimed he could do. He can launch his motorcycle sorta fast, but when it came to making sweet jumps off the ramp he came with, he was known more for crashing and burning than sticking the landing. He’s not as scratched and dinged up as some of his other toy counterparts – because he wasn’t played with very much – but he’s just as neurotic about his purpose and place in the world.

For a sizable chunk of Toy Story 4’s lengthy production, Mason and his team were allowed creative input when it came to the creation of Duke Caboom, which included coming up with a list of potential casting choices. One of the names provided by the Canadian office was none other than one of the most popular actors of the moment, Keanu Reeves, a choice that immediately excited everyone over at Pixar.

Reeves, a real life motorcycle enthusiast and native Canadian who seems to be everywhere this year thanks to a plethora of newfound successes and pop culture adoration, met with Rivera and Toy Story 4 director Josh Cooley at Pixar’s home offices in the San Francisco bay area, and from that first meeting onward it was clear that this was the man to play Canada’s greatest daredevil. During their meeting, Reeves famously got up on a table in the Pixar homebase’s cafeteria and started acting out some of Duke’s signature motions, poses, mannerisms, and facial expressions. It was pretty much love at first sight for Reeves and his character, and the filmmakers knew the fit was perfect.

“You can do anything with toys. It’s such a magic world to play in,” Mason says about working with Pixar on Duke Caboom. “It was so much fun to work on a little bit every day for almost two-and-a-half year, even though we couldn’t tell anybody about it. I’m a proud Canadian, and our entire team is proud to be Canadian, and there’s something about the character that’s quintessentially Canadian. It’s a great time to be Canadian, and this character is something that can be embraced worldwide. All my colleagues across the globe think it’s great because Canadians are very well respected on the world stage, and Duke is a great reflection of that.” 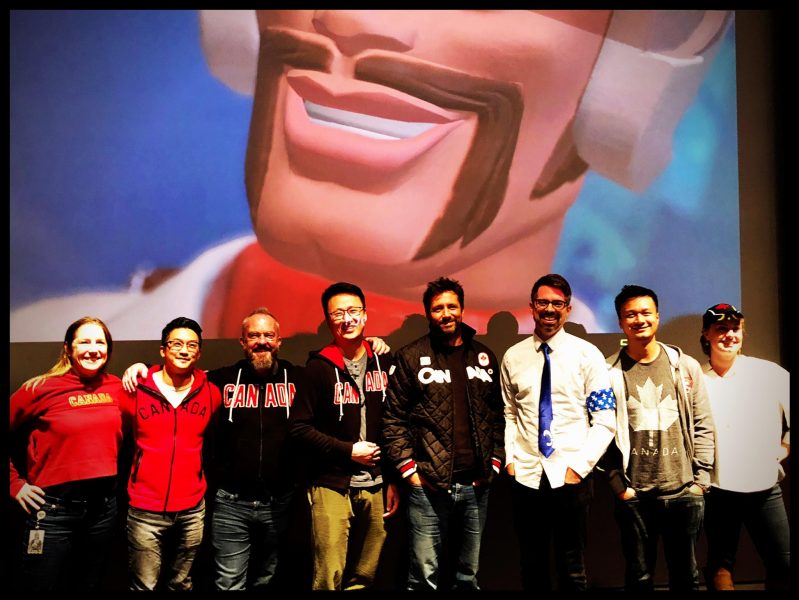 Duke’s Canadian identity extends beyond the meetings, casting, and writing of the character, but also to the department tasked with bringing the character to life. A majority of the team tasked with animating Duke was also Canadian, which is probably why the first image of Mr. Caboom sent to Mason as an idea about what he’ll end up looking like had the handlebar moustachioed stuntman holding a box of Timbits. That little inside joke between colleagues isn’t in the final version of Toy Story 4, but plenty of other Canadian references are, some of which actually required governmental approval.

“One of the other fun things when we were looking at Duke was when it came to looking at the Canadian Maple Leaf and flag, and all the trademarks and restrictions that come with it because Disney is understandably careful and respectful with these kinds of things,” Mason says about being careful to paint such an iconic Canadian image with respect. “We worked closely with the Canadian government, and I had the privilege of working alongside the Heritage Minister as a part of the process. We wanted to share and show, not so much for any sort of legal clearances, but for them to know what we were doing. As you can see in the film, at one point, Duke crashes through the Maple Leaf, and we wanted to be sure that the Canadian government and respective folks knew what our intentions were. Duke was never going to be a character that was always apologizing and making jokes about maple syrup and beavers. There’s none of that in this film. It’s just a great Canadian character. We had a great working relationship with the Canadian government, and when we launched the character and put it out there, the official Twitter account for the government of Canada acknowledged it. We didn’t even ask. They pushed it out on their own about Duke Caboom.”

For Mason, who hopes Canadians and audiences around the world enjoy the character as much as he enjoyed helping to create it with the Pixar team, working on Toy Story 4 feels like his own career coming full circle in a way. Mason, who has been with Disney since the 1990s, says that one of the first movies he ever worked on was the original Toy Story back in 1995, and while the series has gone on to become one of Pixar’s crowning achievements, back then no one could’ve predicted that it would spawn a beloved franchise, let alone theorize that someday a character like Duke Caboom would exist.

“It was a tough sell initially,” Mason says about how different prospects were for Toy Story back in 1995 versus today. “We were coming off of this film you might remember called The Nightmare Before Christmas, which went on to become a cult favourite, but it was initially considered a flop that didn’t do well. Then we were asked to sell this new computer animated piece, and it was a very tough sell. It was hard at first to get people interested in it. Fast forward to today, and you can see that there’s something about these characters and these stories that’s being passed on from generation to generation. My 21-year old son is excited to see [Toy Story 4] because he grew up on these characters, and you can now see it getting passed down to new generations. These characters are so special, that our approach now is to make sure that there are some new characters and situations for those younger generations who didn’t necessarily grow up with the first film. We’re always trying to create than hand-off and bridge to the next generation.”