Annabelle Comes Home isn’t the film it’s being marketed as, and that’s actually a good thing. Anyone who sees the trailers or television spots for this third entry into a not particularly great franchise (the third, at least, to feature the titular malevolent dolly, but the seventh film in The Conjuring extended universe) would probably expect an intense, unsettling bunch of jump scares and possession movie tropes. Instead, Annabelle Comes Home is rather charmingly geared towards a younger crowd that might be looking for something a step beyond their Goosebumps books and movies. Those expecting something a bit more hardcore might find Annabelle Comes Home to be a bit hokey, corny, and predictable (like the men in their late twenties or early thirties – all thickly bearded and dressed in black – seated behind me, who openly, incessantly, and loudly expressed their scorn for the film’s tone through annoyingly elongated sighs, tiresome chatter, scoffs that sounded like they were choking on their own cleverness, and childish fart noises), but anyone in the mood for something a bit different from today’s horror movie norms should appreciate the change of pace. I couldn’t stand the two previous Annabelle films, but I have no trouble admitting that I had a fair bit of fun with this more tween and teen oriented venture.

Annabelle Comes Home finally links up its spin-off series with The Conjuring, opening with the story of how spiritualists and demon hunters Ed and Lorraine Warren (Patrick Wilson and Vera Farmiga) ended up with the doll in their possession. The creepy, porcelain faced doll with pigtails, way too much rouge, and a giant red bow wrapped around a dirty, white dress isn’t actually possessed, but rather a conduit for a demon “who never actually walked this earth” to do its bidding. It’s not only demonic, but also a beacon capable of bringing other spirits to life. The Warrens keep Anabelle locked up in their basement, safely encased in a prison of sorts constructed with consecrated glass from a defunct church, alongside a bunch of other ghostly, possessed, and demonic knickknacks from previous cases.

Wilson and Farmiga aren’t in much of Annabelle Comes Home, and, come to think of it, neither is the doll, but the opening sequence that features all three of them nicely sets up what screenwriter and first time director Gary Dauberman is going for with his material. Dauberman (who wrote the previous Annabelle films and works from a story by The Conjuring mastermind James Was for this one) cranks up the fog machine and humour instead of the grotesque imagery. Farmiga and Wilson feel a lot looser and more relaxed here than they did in their previous franchise appearances, and it’s a great decision that helps to establish Dauberman’s more youthful and playful approach.

Annabelle Comes Home takes place at the Warren household, as Ed and Lorraine are preparing to take off for the weekend and leave their ten year old daughter, Judy (Mckenna Grace), under the watchful eye of her favourite babysitter, Mary Ellen (Madison Iseman). Judy, who’s starting to see ghosts like her mother, isn’t particularly popular in school, thanks to her parents’ status in the community as either frauds or weirdos, and none of her classmates are likely to attend her upcoming birthday party. Mary Ellen wants to spend the weekend making the best of Judy’s sad situation, but their plans to have cake, play some games, and chill out are undone by the unwanted arrival of Daniella (Katie Sarife), the babysitter’s best friend. Daniella, who recently suffered a family tragedy, wants to gain access to the Warren’s treasure trove of supernatural tchotchkes in hopes that she can find some closure. While snooping around, Daniella unknowingly unleashes Annabelle’s power, and the demon starts bringing all of the Warrens’ past cases back to life. 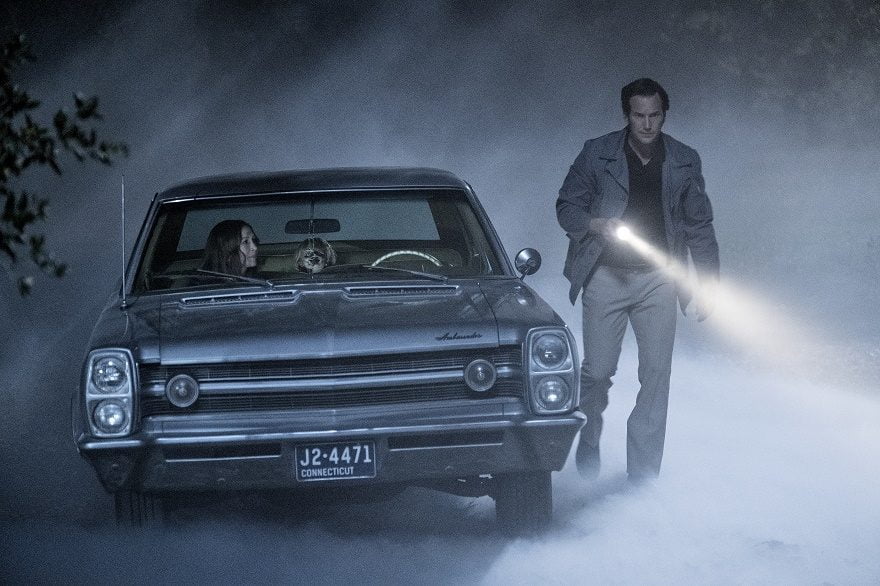 It’s extremely rare to watch a horror movie that boasts three main characters that are good people; not just the type of folks that one doesn’t want to see put in harm’s way, but ones that would credibly be fun and charming to hang out with. Judy, Mary Ellen, and even Daniella are likeable, affable, and somewhat deeper than the heroines of most horror movies, and between the scares Dauberman allows plenty of opportunity for the characters to just relax and be themselves. It’s a nice touch that makes for an almost disarmingly moving experience that one wouldn’t expect from an Annabelle film. They’re caught up in a story that’s borrowing heavily from the younger skewing Goosebumps movies (and to a lesser extent, Spider-Man: Into the Spider-Verse in terms of how many potential spin-offs are set up through the introduction of a variety of new ghosts, ghouls, demon dogs, and dead serial killers), but that youthful appeal is vastly preferable to the same old, same old, and Grace, Iseman, and Sarife are all delightful young talents worth keeping an eye on based on their work here.

Of course, if one goes into Annabelle Comes Home wanting more jump scares, fake outs, visual trickery, spooky shadows, appliances that switch themselves on, and loud, ominous sound effects, Dauberman has them covered. None of the scares throughout Annabelle Comes Home are terrifying or gory, but Dauberman delivers them with energy, conviction, and glee. Annabelle Comes Home hits some stock, predictable beats throughout (and the film’s underlit, but capable cinematography leaves a lot to be desired), but it’s a credit to Dauberman that the film never feels like it’s killing time or going through the motions. It’s almost as if the writer-director knows that the scares won’t be off the charts this time out, and the story has a well worn familiarity to it, so he wisely decides to focus on character. Annabelle Comes Home is one of the few examples of a self-aware horror movie that prefers to be entertaining and engaging rather than constantly calling attention to its own cleverness.

Annabelle Comes Home feels a lot more in line with The Conjuring films than the rest of its spin-off brethren; not because it’s terrifying, but because it’s a story that actually wants to be about something rather than just another cynical bridge to future installments. There’s an endearing, relaxed quality to Dauberman’s film that made me feel younger again for a couple of hours. If I were in my early teens, I could see myself revisiting Annabelle Comes Home frequently around Halloween to put myself in the spirit of the season. If you prefer your scares on the nasty, brutish side or you don’t want to actually feel something for the characters in such films, Annabelle Comes Home won’t be your cup of tea. I, on the other hand, will happily enjoy it as a way of engagingly breaking up the franchise movie monotony. Was I scared by Annabelle Comes Home? Maybe at the appearance of The Ferryman, the best new addition to the series to pop up here, but otherwise, not in the slightest. Was I always entertained and invested? Heck yeah.

Check out the trailer for Annabelle Comes Home:

[…] The Gate: “Annabelle Comes Home feels a lot more in line with The Conjuring films than the rest of its spin-off brethren; not because it’s terrifying, but because it’s a story that actually wants to be about something rather than just another cynical bridge to future installments.” […]