Although one holds out hope that a more thorough and engrossing documentary could be made in the future about one of the most brilliant, popular, and lauded animators to ever live, the slight, moderately illuminating Never-Ending Man: Hayao Miyazaki does offer some insight into the artist’s semi-retirement and fluctuating career. Seemingly slapped together on the fly, first time director Kaku Arakawa’s Never-Ending Man does get more intimate access to the notoriously private and legendarily obstinate Miyazaki than most other filmmakers have, but anyone interested in hearing the aging animation pioneer talk about anything other than the here and now (which is already dated) will be left disappointed.

There have been several times previously in the career of Miyazaki – the co-founder of venerable Japanese animation giant Studio Ghibli and director of such classics as My Neighbor Totoro, Princess Mononoke, Howl’s Moving Castle, and The Wind Rises, just to name a few – when he said he was going to retire from making feature films. Never-Ending Man takes up with Miyazaki shortly after a 2013 press conference where he says he means it this time. Citing declining health and a general lack of focus and concentration, Miyazaki says that making another feature would be too mentally and physically taxing. He disbands his production team, and after some brief, but much needed downtime, Miyazaki sets about work on a short film project that has been famously and frustratingly unrealized over his fifty year career in animation.

During his “down time” working on the short Boro the Caterpillar, Miyazaki embraced computer animation for the first time, after previously adhering to his studio’s mandate and personal belief that nothing could match the detail and visual splendour of hand-drawn works. (Also, quite hilariously, because Miyazaki admits that he can’t draw a caterpillar to save his life.) The short doesn’t go anywhere, and Arakawa never learns or asks about any of Miyazaki’s most highly regarded works, but as a look into the filmmaker’s process and a glimpse into how the director spends his  free time, Never-Ending Man has some charm and insightfulness to it.

It’s not much to look at. A great deal of Never-Ending Man looks like a guerrilla style production that tried to remain almost too literally like a fly on the wall. The low-grade digital video used to capture everything looks cheap, and some of the camera angles are so bafflingly awful that one wonders if a majority of Never-Ending Man was shot by using surveillance cameras concealed in everyday items so Miyazaki wouldn’t be able to see them. It looks less like a movie about a master filmmaker, and more like an undercover drug bust. There might be a reason for such an unusual approach (and I’m almost willing to bet it’s tied to Miyazaki’s personal neuroses and keeping him comfortable on camera), but it certainly isn’t particularly cinematic to look at. (It should also be noted that Never-Ending Man was originally produced for Japanese television broadcast all the way back in 2016, and it’s only now making its way to foreign territories. It’s also already outdated when one realizes that Miyazaki has gotten his Studio Ghibli band back together to make another feature that the director hoped to be released in time for the Summer Olympics in Japan next year, but now has an indeterminate deadline.) 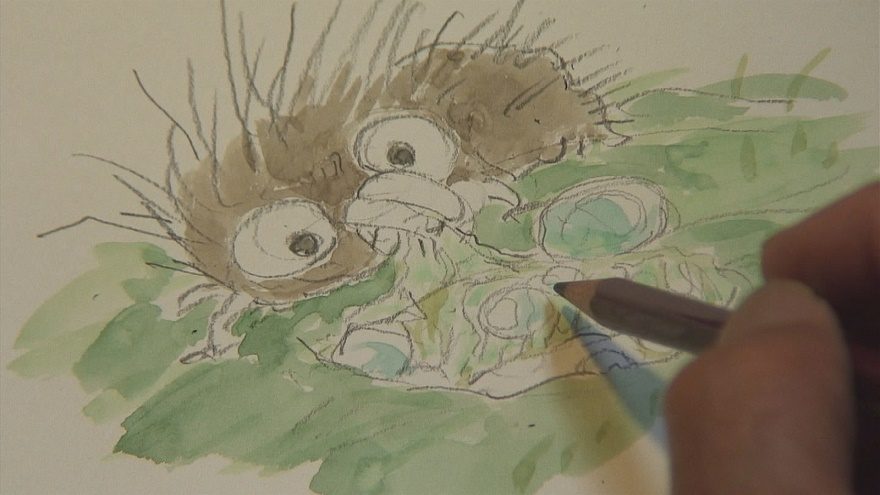 Technical shortcomings aside, there’s still plenty to be learned about Miyazaki from watching Never-Ending Man. There’s some archival footage of Miyazaki working on Ponyo and The Wind Rises – two of his “last” feature films – where one can see the director becoming progressively burnt out and cranky. Miyazaki is a man who demands the absolute best from every member of his team, straight up telling them at points that if they can’t perform up to his expectations that they need to quit immediately. During quieter moments over coffee and cigarettes (neither of which he’s ever out of for very long), Miyazaki, in a round-about way, makes it sound like he finally started listening to his own advice. Working on Boro the Caterpillar with a new team scratches a few different itches for Miyazaki. It’s a chance to get a long gestating project out of his system, an opportunity to try something he purposely tried to avoid learning for decades, and something that will help him ultimately determine if full-on retirement might be a good idea.

Never Ending-Man is less about Miyazaki’s work or a story of a man trying and failing to enjoy the relaxation that retirement brings him, and more about a filmmaker who’s keenly aware of his own mortality trying to enjoy the time he has left to create. Early into the process of bringing the 3D Boro the Caterpillar to life, Miyazaki seems re-energized by his vastly younger collaborators and his disposition perks up considerably. But the learning curve is steep, and it isn’t long before the same doubts that drove Miyazaki to his “retirement” start creeping back. He stepped away from filmmaking because his beloved artform started to feel more like an “ordeal” than an outlet, but whenever he’s feeling good about himself and starts to fall into a productive groove, there’s seemingly no way to stop Miyazaki.

Watching Miyazaki wrestling with self-doubt is fascinating, but that’s all Never-Ending Man has to offer. In that respect, Arakawa’s film is intimate, unflinching, and unafraid to depict Miyazaki in sometimes less than favourable lights, but there’s so much outside of the documentarian’s margins that remains frustratingly unanswered and unapproached. A scant seventy minute running time is perfect for the type of film Never-Ending Man ultimately is, but it curiously isn’t pushing itself as hard as its subject. It looks and moves like it was made by someone who was so enamoured by Miyazaki that they were deathly afraid of stepping over unspoken personal boundaries and losing access to his life. Unlike the new path Miyazaki undertakes in the film during the twilight of his career, Never-Ending Man is resoundingly safe, with any potentially prickly matters smoothed away. One is grateful for any sort of time that can be spent with Miyazaki at his most candid and relaxed, but Never-Ending Man also offers up a wish for something more robust and complete about the subject and his life in the not too distant future.

Check out the trailer for Never-Ending Man: