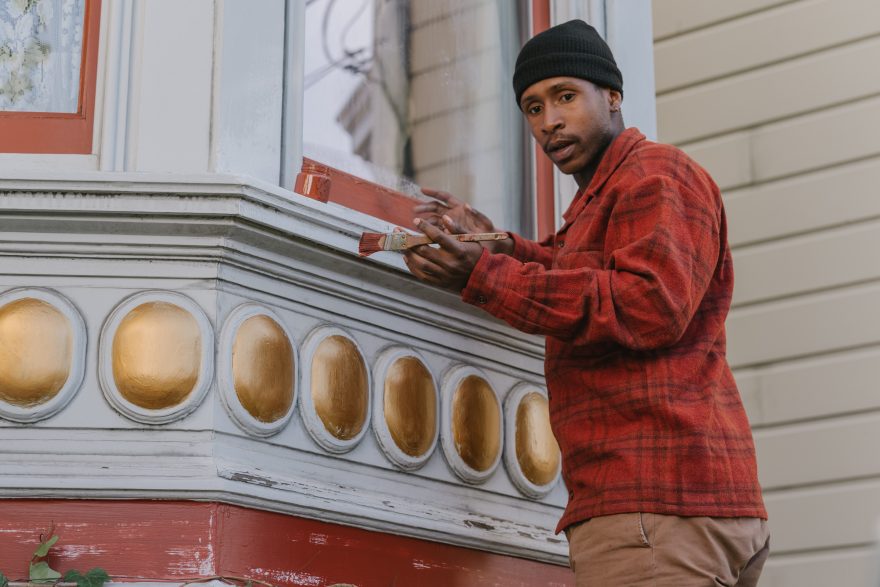 The Last Black Man in San Francisco is one of the most uniquely heartfelt works of cinematic and theatrical art in quite some time; a love letter to people who stand by their hometowns through thick and thin and offer up their unwavering, sometimes foolhardy devotions to a place that seemingly doesn’t love them back. A collaboration years in the making between childhood friends – first time feature director Joe Talbot and star/co-writer Jimmie Fails – The Last Black Man in San Francisco plays like the trippy, tricked out cousin of a James Baldwin work. From moment to moment it can be poetic, bracingly realistic, meta, operatic, whimsical, cinematic, quirky, theatrical, corny, or downright avant garde, but instead of feeling like a work that has no moorings, The Last Black Man in San Francisco is confident and lovingly realized. It’s the type of film that only someone who loves the ups and downs of big city living could ever hope to make. It’s simultaneously unreal and immediately relatable; brimming with instantly recognizable emotions and frustrations.

The film is based primarily on the experiences of Fails and Talbot growing up in the titular city, with the former playing a heightened version of himself. Jimmie is a single minded dreamer. Every day, impoverished Jimmie and his artistically minded best friend Montgomery (Jonathan Majors) make a pilgrimage to the same unusual location. Jimmie, who currently resides on a spot of floor in Montgomery’s bedroom and tenuously holds down a job at a nursing home, yearns to take back the home of his childhood; one that his father (Rob Morgan) lost to foreclosure due to an implied drug problem. The house was built by Jimmie’s grandfather, and he thinks the new owners – a white couple on the wrong side of middle aged – haven’t been maintaining the building properly. Jimmie’s prayers are seemingly answered when the couple suffers a family tragedy and the house looks to be caught up in litigation. Jimmie and Mont immediately begin moving into the unit, essentially squatting but taking care of the house as if they legally owned it. Jimmie is thrilled and proud that his dream has become a reality, but Mont and many around them remain unconvinced that such a life is sustainable in a rapidly gentrifying San Francisco.

The overall storyline involving Jimmie’s quest to reclaim his birthright provides the emotional and narrative backbone for The Last Black Man in San Francisco, but it’s not the only thing on the minds of Talbot, Fails, and co-writer Rob Richert. The Last Black Man in San Francisco is the kind of film that isn’t afraid to take momentary detours to talk about things other than gentrification and the rampantly overpriced housing market that keeps people who would genuinely appreciate owning their own property from having that piece of mind. Talbot will frequently pause to look upon and reflect on the world around the characters, which is sometimes surreal, silly, or serious depending on which bus stop Jimmie is sitting at or which street he happens to be skateboarding down. There are a bunch of dudes on the street corner who look like a gang, but they really only spend their days hurling empty insults at random passerby and each other. The streets are teeming with tourists, including streetcars full of drunken frat boys and uppity yuppies taking ill informed architectural tours on segways. Jimmie’s dad hilariously creates and sells bootleg DVDs of decades old movies to make ends meet. There’s the local guy who sleeps in his car every night (Mike Epps), but is well liked by the neighbourhood at large. Mont’s love of theatre comes from his kindly, patient grandfather (Danny Glover), a man who lost his eyesight, but still appreciates great art. Street preachers drone on endlessly about the toxicity of the surrounding land and water, and people pay little mind because that noxiousness is so prevalent that they don’t need a man of the cloth to tell them everything stinks.

These seemingly unrelated moments, movements, and asides inform Jimmie and his story. The Last Black Man in San Francisco is about a lot of things from squatters rights to how toxic masculinity can be unconsciously passed down between generations, but primarily Talbot and Fails want to show how a city helps to foster one’s cultural identity, and how such people tend to push back whenever outsiders try to come in and recontextualize or claim said culture as their own. Talbot and Fails don’t approach such a multifaceted topic as being only a two sided issue. While The Last Black Man in San Francisco wants to acknowledge and respect Jimmie’s racial identity, it’s a film that more pressingly wants to tell people that they can’t move into any city in the world and immediately claim that they know everything about it simply by being there. It’s a film about the things many city dwellers love and hate about the place they live and the issues that those living outside of those locations can’t immediately comprehend without looking deeper into history. As Jimmie – who’ll gladly and proudly rattle off the history of his property from World War II to the present – claps back to a pair of young women who can’t stop bemoaning all the things they dislike about San Francisco after having only been there for a short period of time, you first have to love a city before you’re given the right to hate it. 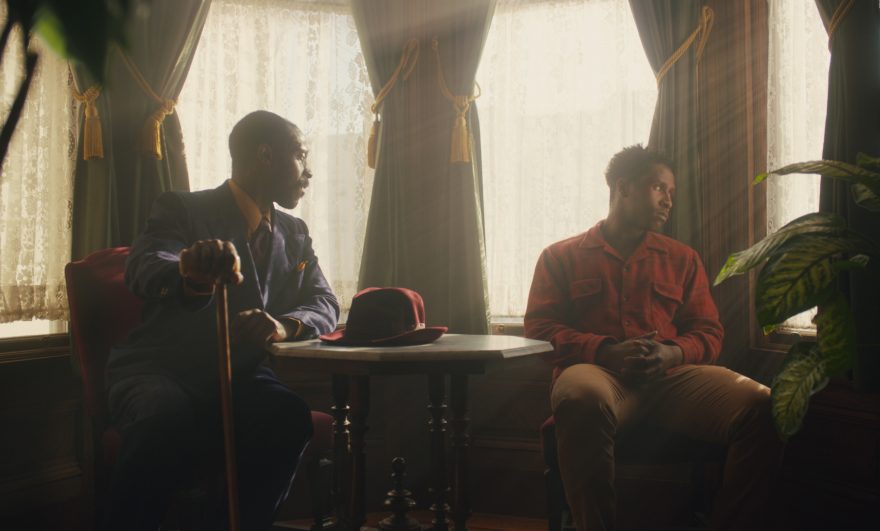 Jimmie’s story plays out in cities around the world every day; people struggling to make ends meet, quixotically chasing dreams they might never achieve, and falling victim to the free market economy run amok. He has no concrete reason to love his city. In fact, the city and its various man made machinations designed to move towards “a brighter tomorrow” have done everything in their power to keep Jimmie down. Even the city’s unreliable, outdated public transit system lets him down at every turn. And yet, he holds the city close to his heart because it made him the person he is today. Every memory he has – positive, negative, or possibly even imagined – comes from the city. The details of The Last Black Man in San Francisco are tied closely to the specifics of the city it’s set it, but Fails and Talbot aren’t going out of their way to pepper the film with references to Silicon Valley, sports teams, queer communities, or aging hippies because the characters don’t feel the need to constantly underline these points. Only tourists would continually seize upon these threads. Locals will only bring them up when asked. The Last Black Man in San Francisco accurately depicts the mindset of someone living in a big city, and with a few tweaks here and there it could be replicated in any other metropolis in the world.

The style of The Last Black Man in San Francisco is something to behold, and while its rapid cycling through various different tones and emotional settings doesn’t always work, it too feels like a natural extension of big city living. One moment, Talbot can be engaging in strict observation, and seconds later his film is spinning off into a magically realistic montage. Some lengthy portions of The Last Black Man in San Francisco come across like a stage play writ large (including some admittedly stilted line readings that don’t always land), but the entire film is building to Mont realizing his own dream of mounting a theatrical production based on Jimmie’s life. Whenever it seems like a moment in Talbot’s film isn’t perfectly integrated on a visual or narrative level, the director makes sure to remind viewers that none of this is insignificant and all of it will make sense by the time The Last Black Man in San Francisco reaches its conclusion, which closes with a big reveal that will probably be obvious to everyone except Jimmie.

Talbot bathes the city of San Francisco in bright, softly focused sunlight, not because he’s trying to paint the rosiest depiction of the city possible, but because The Last Black Man in San Francisco is a film about enduring optimism in the face of apathy and aggression. It’s a depiction that lines up nicely with how Jimmie chooses to view the city, and one that never romanticizes poverty. For all its myriad faults and declining quality of life for those who’ve been marginalized, San Francisco seems like a great place to live and visit, but more importantly a place worth fighting for.

All of Jimmie’s setbacks aren’t the fault of the city or the community at large, but rather the result of influential, privileged individuals who put their own self interests above those of their fellow citizens. These “villains” (perhaps best exemplified here by Jimmie’s semi-estranged father, his almost completely absentee mother, the current property owners, and Finn Wittrock as a duplicitous real estate broker) are the types of people who give cities an unnecessarily bad name. The Last Black Man in San Francisco beautifully shows that cities aren’t created in poisonous images, but are rather skewed through the works and deeds of a handful of unethical people who muddy the waters.

It’s about how communities endure and why they shouldn’t be allowed to fade away so easily in the name of profits and progress. It’s about all the reasons why one would want to stay and the frustrations that could cause them to leave. It’s one of the most mournful and loving odes to a disappearing way of life, and one of the truest and most earnest depictions of urban life ever put to cinema. If you live in a major city and you aren’t part of the top one-percent, it’s impossible not to feel the same as Jimmie some days. The Last Black Man in San Francisco is truly a film for our times.

Check out the trailer for The Last Black Man in San Francisco: