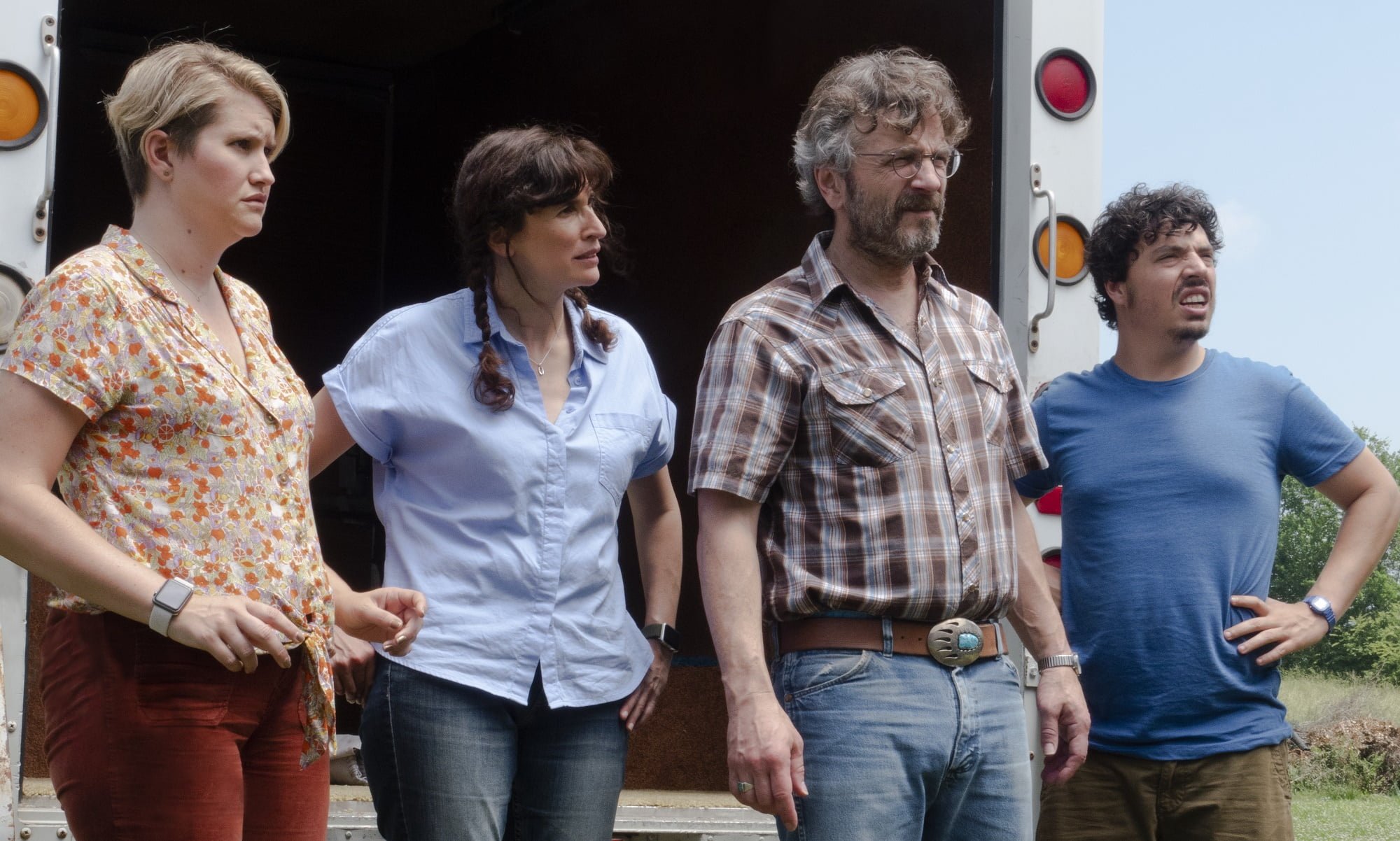 Sword of Trust, the latest film from indie movie veteran Lynn Shelton, takes a lot of metaphorical comedic cues from its titular object, and not in the most complementary of ways. It’s fine that Sword of Trust, much like a lot of Shelton’s other rigorously observant and purposefully shaggy works, is rarely laugh out loud funny, but it’s disappointing that the film’s timely overall message and meaning is blunt and dull rather than cutting and sharp. It has a handful of great and memorable moments, but they’re mixed in with just as many that fall well short of their intended marks and an on-the-nose point of view that’s handled with too much restraint to be all that funny or satirical. Its best sequences are rather effective, and Shelton’s cast brings a lot of good will, but this is also a curiously missed opportunity.

Cynthia (Jillian Bell) is travelling with her girlfriend, Mary (Michaela Watkins), to her hometown of Montgomery, Alabama to claim an inheritance left to her by her recently deceased grandfather. Cynthia and Mary are immediately disappointed to find out that they aren’t inheriting the house (which belongs to the bank thanks to gramps’ crippling debt), but rather a unique family heirloom: a Civil War era sword that belonged to a Union soldier. The sword comes with a rambling, incoherent letter from Cynthia’s grandfather and a certificate of authenticity from a group known as The Invictusians claiming the antique to be definitive proof that the South secretly won the war. Less interested in the sword’s problematic and almost certainly made up provenance and more keen to salvage something out of this trip, Mary and Cynthia bring their inheritance to Mel (frequent Shelton collaborator Marc Maron), a local pawnbroker who initially shows only a moderate interest in purchasing the item. Mel changes his tone, however, when his dimwitted, conspiracy minded co-worker, Nathaniel (Jon Bass), pulls up a video on his tablet from a nut job who says he’ll pay tens of thousands of dollars for any artifact that can help prove the victory of the South. Mel and Cynthia enter into a tenuous agreement to sell the sword to some interested third party buyers, and from there they quickly descend into a rabbit hole of conspiracy obsessed southern wackos.

Director and co-writer Shelton (Humpday, Your Sister’s Sister) retreats somewhat into her cinematic comfort zone with Sword of Trust, which is a bit perplexing when one considers that she has been building a more impressive body of film and television work as of late. Sword of Trust is firmly classifiable as a “mumblecore” movie, a style of filmmaking where everything is stripped down to bare essentials and the script serves as a loose outline for the actors to feel their characters out over time and through experimentation. Several years ago, “mumblecore” movies, like the ones frequently made by Jay and Mark Duplass, Joe Swanberg (who serves as an executive producer on Sword of Trust), Lena Dunham, and Shelton, were as omnipresent in the indie film landscape as weeds. Today, their appearances are fewer and further between, which is why the looseness and familiarity of Sword of Trust feels so curiously out of step with the times, despite the pointed relevancy of the overall subject matter. The overall comedic backbone of Sword of Trust could easily, sadly, and credibly be ripped from any online forum in the internet’s darker, more disreputable corners, but the film itself feels like something that’s coming ten years too late.

After a set-up introduces viewers to all the characters in play, Shelton settles things into a comfortable groove. Most of the film’s first half takes place exclusively within the confines of Mel’s pawnshop, briefly detouring every now and then to stop the plot and examine the business owner’s daily life. Mel bemoans Nathaniel’s aloof ineffectiveness, chats with a kindly short order cook (Al Elliott) who works nearby, and reflects upon the complicated relationship he has with an ex-girlfriend (played by Shelton). We know considerably less about Cynthia and Mary, outside of the fact that Mary is the more passionate, straight-shooter of the couple. Even when the four of them share an extremely long ride in the back of a cargo truck en route to make the big sale, most of the dialogue is given to Maron, who elaborately (and admittedly rather well) fills in the gaps in his character’s backstory. The script from Shelton and Mark O’Brien (who pops up in a cameo for the film’s opening scene) is less a set of strict lines and bullet points, and more like a suggested series of marks and launching points for the actors to find the characters themselves. 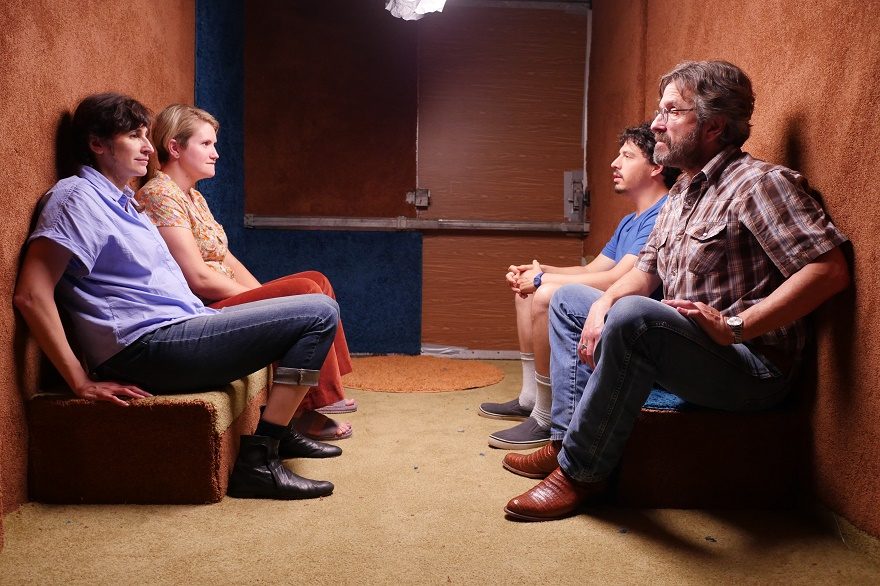 That gambit works well for Sword of Trust, mostly because all four leads and the supporting cast of crackpots that float in and out of their lives are well versed in improvisation. Although there are a few moments throughout where Maron (who also provides some of the music for the film) looks like he’s going to crack up at someone else’s line reading, his particular, matter-of-fact method of delivering quips, putdowns, and observations remains a great fit for Shelton’s speed of comedy and drama. Bass might be a bit too goofy and over-the-top at times for Shelton’s low-key tone, but he’s also one of a handful of touches in the film that truly exhibits the outlandish nature of the material that’s bubbling under the surface. Bell is nicely utilized, but perhaps underappreciated as the straight-woman who’s ultimately become the fourth wheel in a story that’s built around an object that she inherited. Best of all is Watkins, who brings plenty of energy to Sword of Trust, and gets the film’s best scenes whenever she’s tasked with riffing, arguing, or conspiring alongside Maron. They’re all delightful, so why then does Sword of Trust feel so disappointing?

The overall ineffectiveness of Sword of Trust can be attributed to Shelton’s inability to find tonal and emotional balance. It’s clear from the outset that Shelton has little time or patience for conspiracy theorists who construct false narratives to forward their racist or backwards thinking ideologies, but most of the film’s jabs are as soft as marshmallows. So much time has been spent building up the backstory of a couple of the main characters (mostly Maron’s, who shouldn’t be the focus here), that the villains are stock caricatures that never appear to be credible threats to the primary cast. They’re all talented people who are captivating to watch, but what they’re doing is funny in the way that it’s amusing to see a misspelled word on something that’s publicly visible. You chuckle for a second, promptly forget about it, and then you’re onto the next mildly amusing moment.

Mel and Mary agree that the only other reason to sell the sword to these fringe nutbars is to see how truly awful people they are, which could’ve been funny, but Shelton’s depiction of that sort of lifestyle is as flat as the rest of the film. The balance between the wacky and the banal is off throughout, most notably during the film’s climax, which cuts back and forth seemingly at random between Mel and Mary’s negotiating of the sword’s sale and Mary and Nathaniel sitting around outside and discussing flat Earth theory. Everything involving Maron and Watkins is top notch, but it’s never allowed to find a comfortable groove thanks to Shelton’s insistence to show us something decidedly less interesting and funny. This bouncing around between good material and less inspired moments leaves Sword of Trust feeling like comedy about a serious and timely issue that has extinguished the fire in its belly with a healthy dose of antacid.

Sword of Trust does build to a pretty nifty twist that nearly saves the film, but it’s undone by a weak punchline and unnecessarily treacly moment to close everything out. The final five minutes of Sword of Trust is some of Shelton’s weakest and most toothless work, and it sends an already mediocre effort out on a sour note. It’s a pretty big step back and retreat for a filmmaker who had previously been growing their skill set exponentially and artistically. Sword of Trust begs for a more contemporary take on its material; not an approach that might’ve worked better almost a decade ago.

Sword of Trust opens at TIFF Bell Lightbox in Toronto on Friday, July 19, 2019.

Check out the trailer for Sword of Trust: