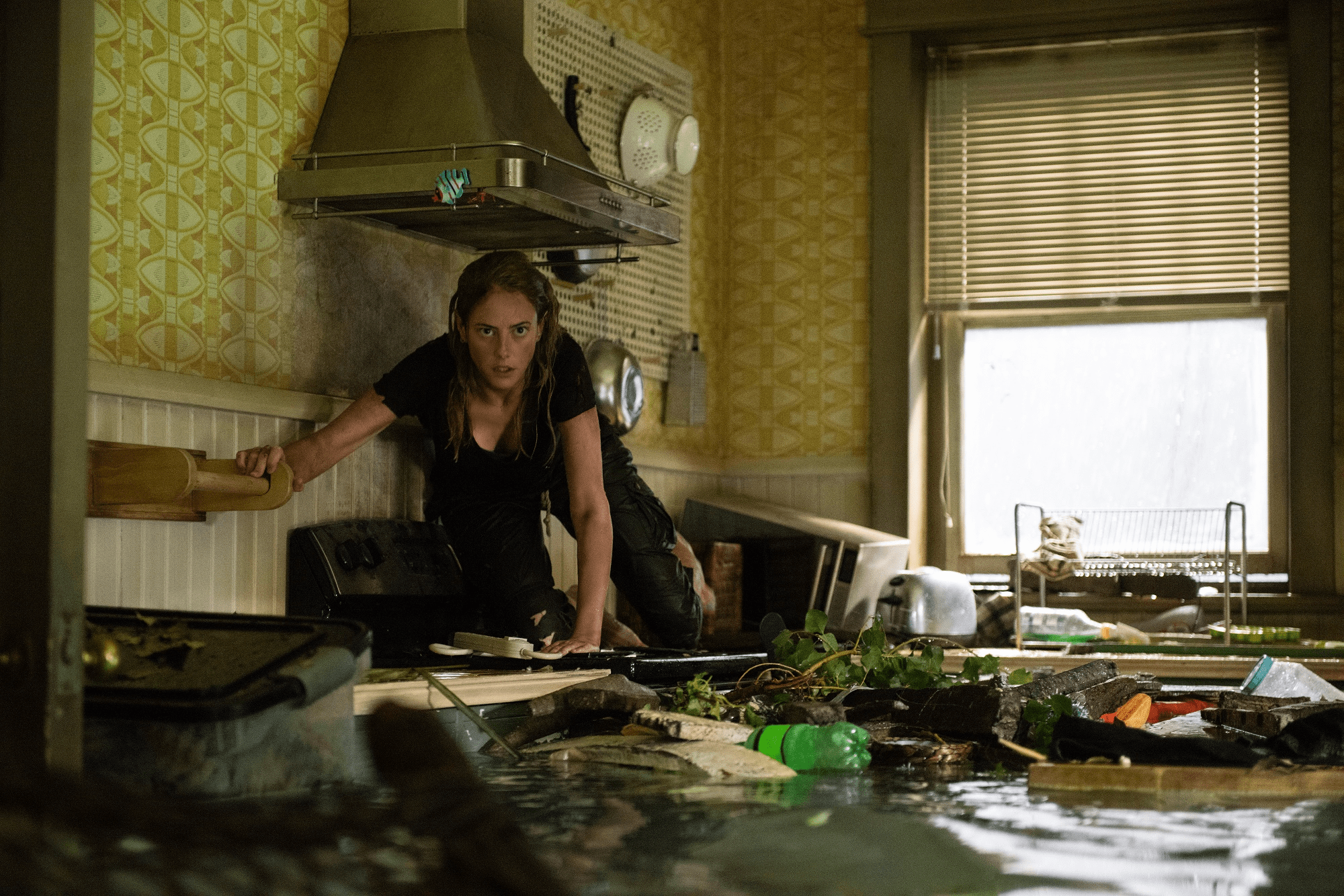 The shockingly boring killer reptile movie Crawl (which wasn’t screened in advance of its opening for critics) has a low bar to clear if it wants to be a bloody, entertaining romp, but instead it chooses to dig miles below it. There are only two things that killer animal movies need to succeed: they had better be terrifying or they need to have a healthy sense of humour. Crawl is the kind of inept B-movie thriller that wouldn’t know what it was like to be scary if the theatre was on fire, and it takes its ludicrously implausible premise and poorly drawn characters so seriously that it doesn’t entertain in a “so bad it’s good” way. I’m a sucker for killer croc and gator movies, but this is easily the worst that subgenre has to offer.

Haley Keller (Kaya Scodelario) is busy training for an upcoming swim meet at the University of Florida (home of the Gators, har dee har har), when she gets a call from her worried sister (Morfydd Clark) up in Boston. A massive hurricane is about to strike southern Florida, and their father, Dave (Barry Pepper), can’t be reached. Haley worries that dad didn’t follow the evacuation order, and he’s trying to stubbornly ride out the storm. She drives down to her old hometown as the intensity of the storm is ramping up, and while she finds the family dog, Sugar, safe and sound, there’s no sign of dad. Haley ends up finding Dave in the crawlspace under their old home, which dad has been forced to give up following a divorce that didn’t go very well. Dave was attacked by a large alligator while trying to put up some boards in a crawlspace beneath the home. His leg is broken and he has enormous gashes on his shoulder. Haley attempts to pull her father to safety, but she’s also trapped in the crawlspace by multiple bloodthirsty alligators. They have a limited amount of space where the gators (which are implied to have escaped from a nearby farm) can’t get to them, but they also have few tangible escape points and a rapidly rising water level to contend with.

Crawl gets off to an interesting enough start, not because the story is engaging in the slightest, but because it looks rather stunning. The scenes where Haley is trying to piece together Dave’s disappearance are colourful and menacing, full of requisite torrents of rain, but also plenty of eye-popping blues, grays, and whites. The earliest scenes of Crawl do their best to establish a sense of dread, and they almost succeed in spite of the fact that the script from Michael and Shawn Rasmussen (The Ward) and direction from Alexandre Aja (High Tension, Horns, Piranha 3D) isn’t doing anything more than killing time. The cinematographer and colour grader are certainly earning their paychecks with the early sequences in Crawl, and the actors certainly are when one considers the almost unfathomable unpleasantness of working ten to twelve hour days where you have to be dirty, soaking wet, swimming, and acting scared at all times. Unfortunately, Aja and the Rasmussens aren’t keeping up their end of the bargain. Once the action shifts to the crawlspace, the film dies a slow, painful, unendingly boring death. 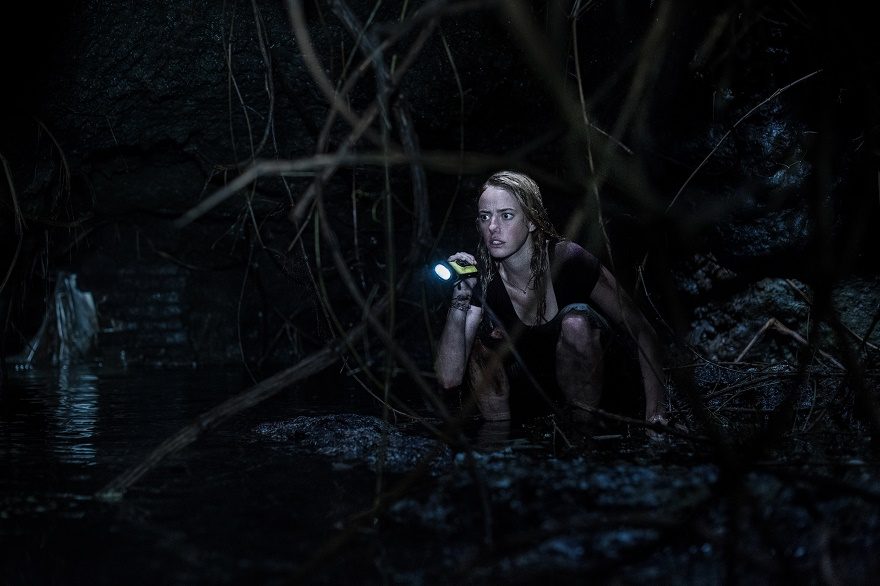 Let’s set aside the over all implausibility and contradictions in play throughout Crawl. Horror movies don’t always need pitch perfect believability to succeed. Outlandishness can be entertaining, and anyone familiar with Aja’s previous films will immediately know that there are few other working directors today who care less about consistency, continuity, or things making a lick of sense. The problem here isn’t the fact that I don’t believe these characters would survive, but rather how long the film spends outlining their failed escape attempts in ponderous detail.

There’s a sequence where Haley attempts to retrieve her cell phone after dropping it. We can see that the phone is only a few feet away from Haley and Dave’s current position, and that the gators aren’t particularly close. Let’s add to the mix the fact that Aja’s gators are painfully slow on land and impossibly fast in the water, so this early into the movie, none of them seem like they’re in much of a hurry to end things. In an attempt to calm things down, dad tries talking to his frustrated daughter about her swimming career, which could be funny and out of place in a better movie, but here it’s handled like we should actually give a damn about it. I don’t have a good explanation as to why, but this simple quest of retrieving the phone – without problem solving better, more obvious ways of getting it first – drags on for five minutes, with no interference from the villainous animals until they pop up for a requisite jump scare at the end. When this painful bit of wasting my time was over, I looked at my watch and was aghast to find out that almost an hour of the film had already passed and nothing scary, funny, or interesting had happened up to this point.

Around this time, some misfortunate looters and cops pop up to be fed to the gators, but Crawl is still spinning its wheels and going nowhere. Everything that happens outside the crawlspace is equally as dull and forced as everything else in the film, but at least the visual aesthetic in the exterior shots gives the audience something almost worth looking at. There are plenty of animal attacks full of bloody wounds, broken bones, and people getting thrashed about, but those moments are far between and they look absolutely terrible. They’re a mess of unconvincing CGI blurs and jittery edits that make it impossible to tell what’s actually happening. The actors can’t help, either. All they have to do is scream, flail, wriggle in pain, and look concerned. Nothing can save Crawl other than adding some outlandish sensibilities or a bit more tension, but Aja can’t seem to be bothered. The film eventually leaves the crawlspace for the finale, but instead of mounting a grand send-off that might give the audience what they came to see, Aja somehow doubles down on the tedium, putting the characters through the wringer so slowly and painfully that one actively starts rooting for their deaths so we can get out of the theatre.

Crawl is a horror movie with no terror, no playfulness, no humour, and the most arbitrary ideas and sensibilities. When the alligators aren’t attacking, Crawl is the most boring motion picture of the year. When they do attack, Aja and the Rasmussens haven’t given the viewer a single compelling reason to care about any of it. Heck, it’s so dreadfully dull and plodding that they don’t even give viewers empty reasons for enjoying their bloodlust. Crawl boasts a premise that could’ve been dumb or scary fun in better hands, but it plays like they hired mostly all the wrong people for the job.

Check out the trailer for Crawl:

You’re absolutely right. I couldn’t believe how boring this movie was. And I didn’t care a lick about any of the characters. I can’t believe I’m saying this but give me “Alligator 1980” any day of the week. At least that film had a sense of humor.