Review: The Art of Self-Defense 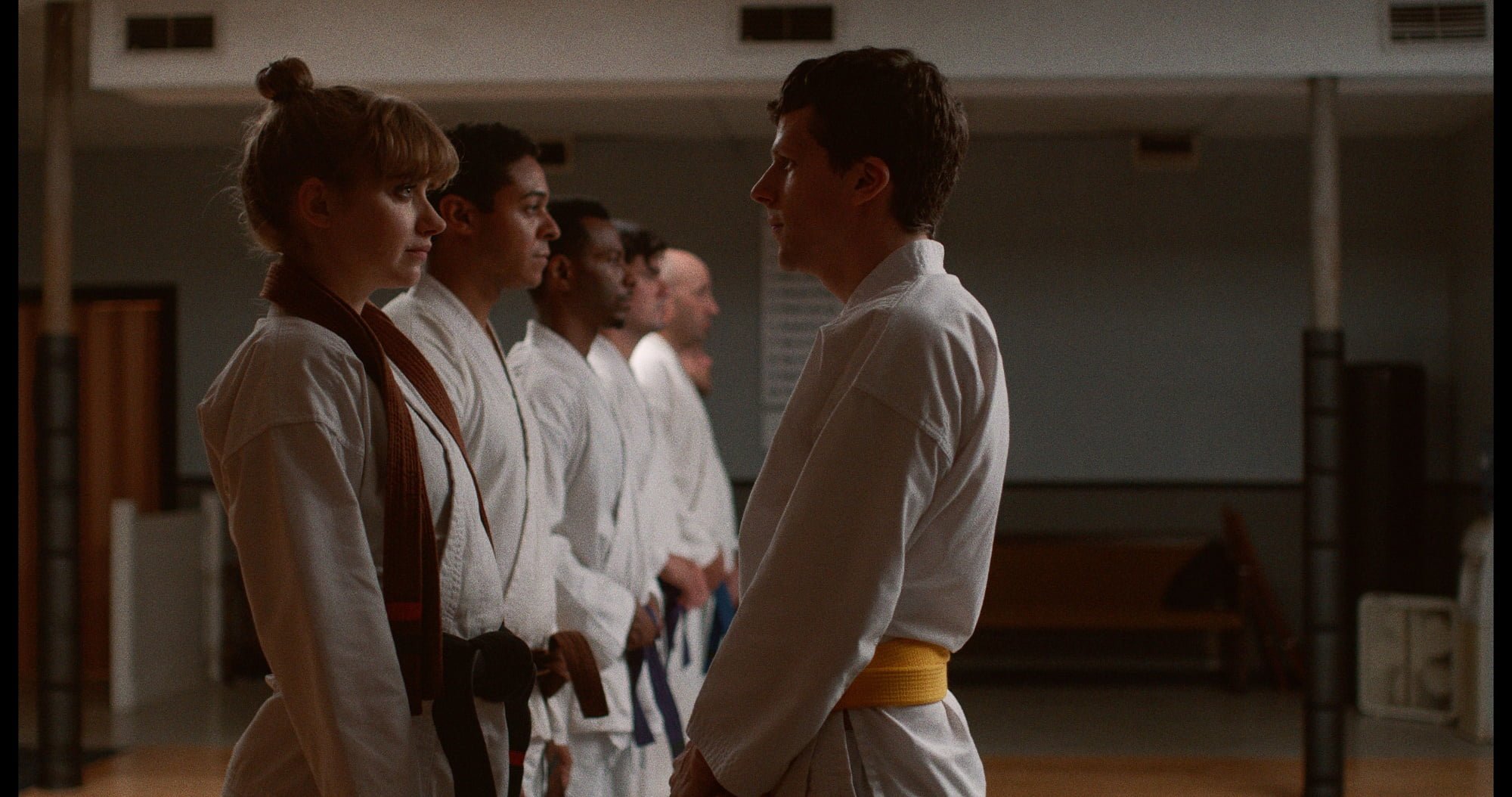 I’m not quite sure what to make of the oddball, bloody, deadpan black comedy The Art of Self-Defense, but I’m positive that it’s the kind of film that’s going to stick with me for a long time. Outside of writer-director Riley Stearns’ preternatural ability to stage even the most brutal and menacing of sequences with memorably straight-faced comedic glee, The Art of Self-Defense is one of those films that’s more about the subtext than its actual text. It’s hard to explain without giving the whole thing away and breaking down each individual punchline, but Stearns’ film is just as much about lapsing modern day social graces as it is about the evolution of toxic masculinity. Did I mention this is ostensibly meant to be a comedy? I don’t really know how to explain it to those who haven’t seen it, and I’m equally unsure if it’s entirely successful, but I can definitively acknowledge that I haven’t stopped thinking about what it all could mean for the past several days.

Set sometime in what I think would have to be the early-to-mid 1990s based on the technology on display, the ragged, decaying period decor, omnipresent fluorescent lighting, and Stearns’ cheeky VHS quality aesthetics, The Art of Self-Defense tells the story of Casey (Jesse Eisenberg), a meek “thirty-five year old dog owner” and office drone who is mugged by a bunch of thugs on dirt bikes one night while stepping out to buy pet food. The incident leaves Casey shaken to his core, but instead of becoming an agoraphobic recluse, he’s tempted into learning karate. He walks into the dojo of the mysterious Sensei (Alessandro Nivola), a smooth talking, confident alpha male who alternates his speaking manner between  talking in philosophical riddles and being far too literal. When Sensei learns that Casey is there as the result of a traumatic incident, the instructor invites his new student to attend his far more brutal and mysterious “night classes,” which go beyond teaching the art of self-defense and into far more bloodthirsty territory. While Casey begins to gain more self confidence and aggressive tendencies, he also begins to wonder about the true nature of Sensei and his disciples.

The Art of Self-Defense is one of those movies where laughter feels simultaneously cathartic, appropriate, and uncomfortable, and not just because it’s all delivered by Stearns’ cast with straight faces and sometimes emotionless monotone. It’s questionable because mostly everything depicted in The Art of Self-Defense isn’t inherently funny. Stearns’ film touches on peer pressure, toxic mentor-mentee relationships, sexual inequality, animal abuse, suicide, capitalism run amok, and misguided revenge fantasies, but instead of playing them for over the top laughs and set pieces, The Art of Self-Defense absurdly takes these outlandish characters and their skewed visions of their self-worth at face value. There’s no sense of ironic detachment in Stearns’ material or in the performances being given. These are assuredly characters in a movie, but they take their world very seriously. The irony of The Art of Self-Defense can only be found when one chooses to look beyond the blood soaked margins.

Although it never comes out and expressly says so – hiding behind its undefined period trappings – The Art of Self-Defense is one of those films about the state of our world today. Stearns clearly has a lot on his mind about the ways humans interact with each other, the loss of civility, outmoded displays of physical and emotional strength, and how the power of anger and hatred can give some people intoxicating highs. It’s about how people who’ve been hurt can be “empowered” to hurt others in worse ways. It’s about learning to love the feeling of being angry around the clock. It’s about how these cycles of selfishness and violence are allowed to be perpetuated and handed down from generation to generation. It’s about how easily someone can flip from being liberal to conservative and back again, gradually compromising their moral character with each passing change and evolution. It’s about how egotistical people in positions of power condition others in their image. It’s about people who act without self-awareness and the double edged sword of extreme self-confidence. Through Imogen Poots’ character – a frustrated, but equally and angrily empowered fellow instructor at the dojo that Sensei refuses to bestow a black belt upon – it’s about how these feelings of rage embolden feelings of sexual inequality. In short, The Art of Self-Defense might be taking place in a different era, but it plays pointedly and effectively like Twitter or internet comments sections come to life. It’s a purposefully nasty comedy out of time for a nasty modern world.

It’s impossible to watch Casey’s transition into a morally compromised antihero and not think about how this scenario plays out every day in the real world on less absurd scales. With The Art of Self-Defense, Stearns is taking these insidious evolutions to over-the-top conclusions, but the actual nuts and bolts messages at the heart of it all are obvious and hard to miss. The easiest, although certainly not incorrect reading of The Art of Self-Defense would be to see it as a takedown of the sort of notions of masculinity one might find in the pages of the seediest and sleaziest lad mags, but Stearns’ particular brand of comedy is one that’s more focused on consistently stripping away layers and getting closer to the dark, hardened hearts that choose to live in such a world. As the story progresses and grows considerably darker – building to shocking moments that wouldn’t be funny or amusing no matter how one chooses to look at them – Stearns’ bullet points come into sharper focus. 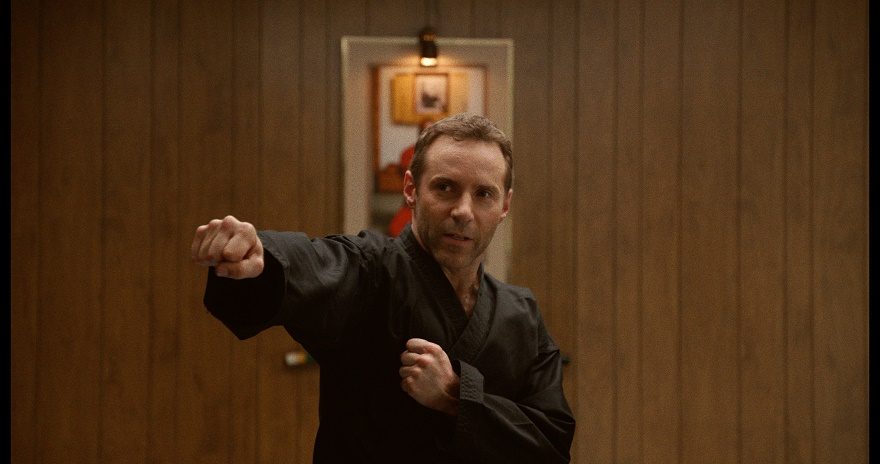 Again, did I mention that The Art of Self-Defense is supposed to be seen as a comedy? It is a funny movie, chock full of surreal touches (like Casey’s pissy sounding answering machine, wonderful use of the colours yellow and brown, or the main character’s desire to wear his belt at all times) and expertly delivered zingers, but only a third of the jokes are actually funny on their own merits. The other two thirds of Stearns’ gags are things he either wants the audience feel bad about laughing at or on-the-nose observations that miss their intended marks because they’re too mean to be funny by any metric. Then again, I feel like that’s the point. The Art of Self-Defense is a goofy comedy one moment and a deliberate provocation the next. The comedic beats are captivating, but also leave The Art of Self-Defense feeling curiously overstuffed. Stearns’ really only needs half of this material to make his points, and sometimes the film feels like it’s needlessly wallowing in its own sense of discomfort and malaise. It’s pointed, but also dulled by comedic indulgence. To dismiss The Art of Self-Defense as Napoleon Dynamite for psychopaths is both reductive and somehow strangely appropriate at the same time.

Stearns’ material requires performers capable of inhabiting such a surreal, almost dreamlike world with a great degree of conviction, and the filmmaker has found perfect collaborators in Eisenberg and Nivola. Eisenberg has dabbled in this specific sort of dark comedy before with Richard Ayoade’s underrated and Kafkaesque oddity The Double, and the actor provides a pitch perfect emotional anchor for Stearns’ style of deadpan. It’s an even better showcase for Nivola, a perpetually under-utilized character actor who gets the role of his life with Sensei. Nivola plays his role as both a charismatic menace and a transparent doofus, all without cracking a smile or a chuckle throughout. They’re both deadpan caricatures, but also perfect foils for each other, with Poots adding some depth and a necessary external counterpoint in the scenes she shares alongside them.

The leads help a lot to sell such sprawling subtext, but perhaps a bigger problem than Stearns’ desire to touch on so many social ills in a single pass is the fact that The Art of Self-Defense is the rare example of a deadpan comedy that’s disappointingly predictable. There’s a lot to read between the lines, but the overall trajectory of Stearns’ story is relatively straightforward, and frequently to the detriment of the film as a whole. As the reveals surrounding Sensei’s dojo start piling up, none of them register as being all that surprising. There are obvious visual clues peppered throughout and hard to miss passages of dialogue that practically spell out in needless detail where all of this is ending up. It makes investing in an already challenging story told in a very specific, purposefully alienating style all that much harder when it turns out that everything the viewer is thinking about the story will turn out to be right in the end.

But in spite of how the film doesn’t entirely work as well as I think Stearns wants it to on the whole, each individual scene leaves a considerable impression and boasts material worth parsing and paying careful consideration. The Art of Self-Defense is as daring as it is unwieldy, but that only makes it all the more fascinating. It’s a film that pushes what viewers are able to handle on an emotional level and asks them to confront the ways they’re reacting to the material and how it’s being delivered. It’s a rorschach test in the trappings of a dark comedy. Even after writing all of this down, I still don’t know what to make of it, and I don’t think it’s all that funny, but I doubt I’ll ever forget The Art of Self-Defense, and that’s as big of a compliment as anyone could pay a movie these days.

The Art of Self-Defense opens in select Canadian cities on Friday, July 19, 2019.

Check out the trailer for The Art of Self-Defense: