Free Trip to Egypt is an effective, lightweight documentary designed to tear down misconceptions many westerners have about living in the Muslim world, and while many of the insights shared between varying cultures won’t be too surprising to most of the people predisposed to see such a film, it’s still rather nice to see. It’s sometimes corny, earnest, and obvious, but Free Trip to Egypt is so clearly a passion project designed to bring a little more kindness and understanding to a heavily divided world that it’s hard to criticize. It’s meant to lightly educate and entertain, turning potential scowls and sneers into smiles along the way. Many films made for all the wrong reasons (even halfway decent ones), so it’s always a pleasure to spend time with a movie that has its heart and mind firmly in the right place.

Although Free Trip to Egypt is the first feature from filmmaker Ingrid Serban, the overall concept of the documentary comes from Canadian-Egyptian entrepreneur and investment guru Tarek Mounib. Born in Halifax in the 1970s and remembering what it was like to come from the only Muslim family in town, Mounib has always had equal parts pride and curiosity when it came to his Egyptian and religious heritages. In recent years, Mounib (who currently resides in Switzerland for work) has watched as Egypt has become lumped in with other Muslim countries by Americans who think every inch of the Middle East is crawling with terrorists, kidnappers, profiteers, and religious zealots who despise Uncle Sam, apple pie, and the good ol’ stars and stripes. Mounib’s experiences in Egypt have been vastly different, and he’s willing to do whatever he can to change perceptions that Americans might have about the country and its people, even if that means offering random strangers an all expenses paid vacation to Cairo.

The set-up for Free Trip to Egypt is the most intriguing part of the film, mostly because Mounib’s efforts are like pulling teeth. Most of the Americans he advertises to on the internet or meets on city streets or in small towns (even going as far as visiting a Trump rally) either ignore him outright or flat out tell him that there’s no way in hell they’re going to Egypt, regardless of who’s paying for it. Some people think he’s a human trafficker. Some think he’s part of a terror cell. Some fear that they’ll get beheaded the second they get off the plane, or that any minor misstep that they make will make them the target of Sharia Law. One woman wearing a MAGA hat straight up tells Tarek that America should invade Egypt, “shut it down,” and “take back our oil.” While these might be some of the more extreme American stereotypes on display, they’re the ones most vocally against Mounib’s altruistic aims. These are also precisely the kinds of people Mounib is looking for.

Free Trip to Egypt eventually finds a group of willing participants and hits the road with them. There’s Ellen, a Jewish woman, and her husband, Terry (who have an adult son who teaches in Saudi Arabia), who used to be anti-war and civil rights advocates, but they turned on a dime when the 9/11 attacks happened, and by her own admission, she has become a racist. Marc is a black beat cop from Kentucky who doesn’t like talking politics (after providing security for several Trump rallies) and has no idea what to expect. Brian is a former Marine and a Christian with hardline devotion to Trump and anti-immigration stances, but he’s also keen to experience a new culture for himself. Brian helps to bring along his other friends, Jenna, an actress and former Miss Kentucky winner, and Jason, an evangelical who’s keen on converting everyone he can to Jesus Christ. Katie is also a former Marine and a single mother who has heard that Egypt has an overwhelmingly sexist culture, which she thinks is more troubling than any fears her far-right leaning parents might have about her safety. 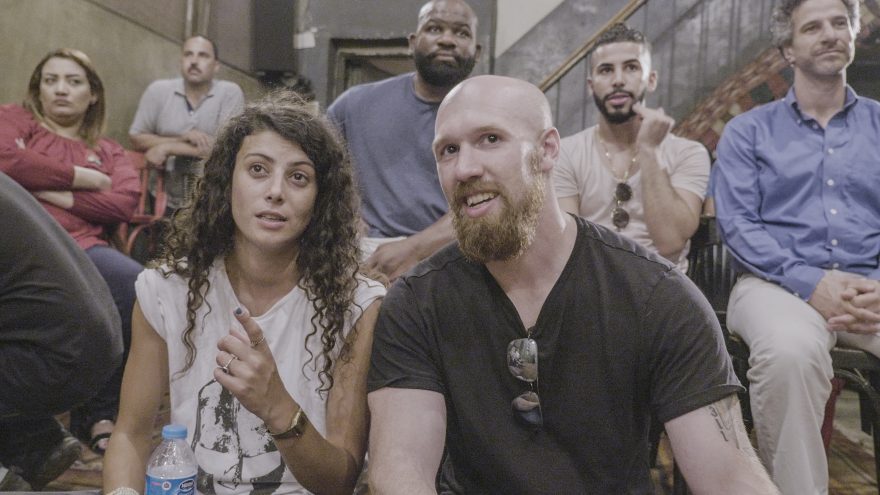 It’s not hard to guess which of the subjects in Free Trip to Egypt will turn out to be the most annoying and toughest to like. (Hint: it’s the one that even some of the fellow travellers have to not so subtly tell to shut up.) It’s also not hard to see how their moral character and sense of understanding will change during the course of their trip. They’re all partnered up with various everyday Egyptians who seem like they would have similar personalities and temperaments to their American counterparts (some of whom also think that Trump isn’t as bad as their own media makes him out to be, which is a curious choice). Ideas are exchanged. Fears are put out into the open to be discussed and refuted. Nerves are calmed, language barriers are overcome, and common ground is established. Everyone has more fun than they expected they would have (which is nice to see because a vacation, even a free one that’s being filmed with an express purpose in mind, should be fun to some degree). After only a day, everyone’s ready to admit that a lot of their preconceptions were completely wrong.

None of this is surprising when one considers the nature of the travellers themselves. Free Trip to Egypt has selected people who, in spite of their obvious biases and misinformation, are genuinely interested in either healing their own problematic tendencies or seeing something beyond what they read on the internet, hear from ill informed friends, or see on the nightly news. There’s a genuine desire to learn and grow, even if there’s some fear and trepidation. With the possible exceptions of Marc and Jason, they all seem somewhat worldly, making them pretty easy to win over. There’s also a distinct feeling throughout Free Trip to Egypt that Mounib wouldn’t go ahead with the film if the overall final response was one of negativity. Things don’t start off well for Tarek, but he persists, and in some ways it seems like he got lucky. Tarek is so excited and energized about the prospect of his social exchange that I doubt the film would ever see the light of day if he had his soul crushed by the experience. None of these people are overwhelmingly naive, but many of them (except for the Egyptian locals) are very earnest, and that provides Free Trip to Egypt with its overall tone.

Serban doesn’t have much to do as a director except follow Mounib and his subjects around and conduct a handful of interviews, but at least she’s filming a successful project. The fact that Mounib’s plan mostly works means Serban’s film succeeds in its modest goals. Not much is in doubt here, but each of the travellers and the hosts share something with Serban that they might not talk about among their usual circle of friends and family. They all learn something about each other, and that’s the whole point of the film. It could stand to lose about twenty or more minutes worth of unnecessary padding, but overall Free Trip to Egypt is a hopeful and kind film for seemingly hopeless and downbeat times.

Free Trip to Egypt opens at Bytowne Cinema on Friday, July 19, 2019, Vic Theatre in Victoria on July 26, Carlton Cinemas in Toronto on August 2, Vancity Theatre in Vancouver on August 4, Hyland Cinema in London, Rainbow 9 in Regina, and Rainbow Roxy in Saskatoon on August 9, Gorge Cinema in Elora on August 16, and Globe Theatre in Calgary on October 4.

Check out the trailer for Free Trip to Egypt: