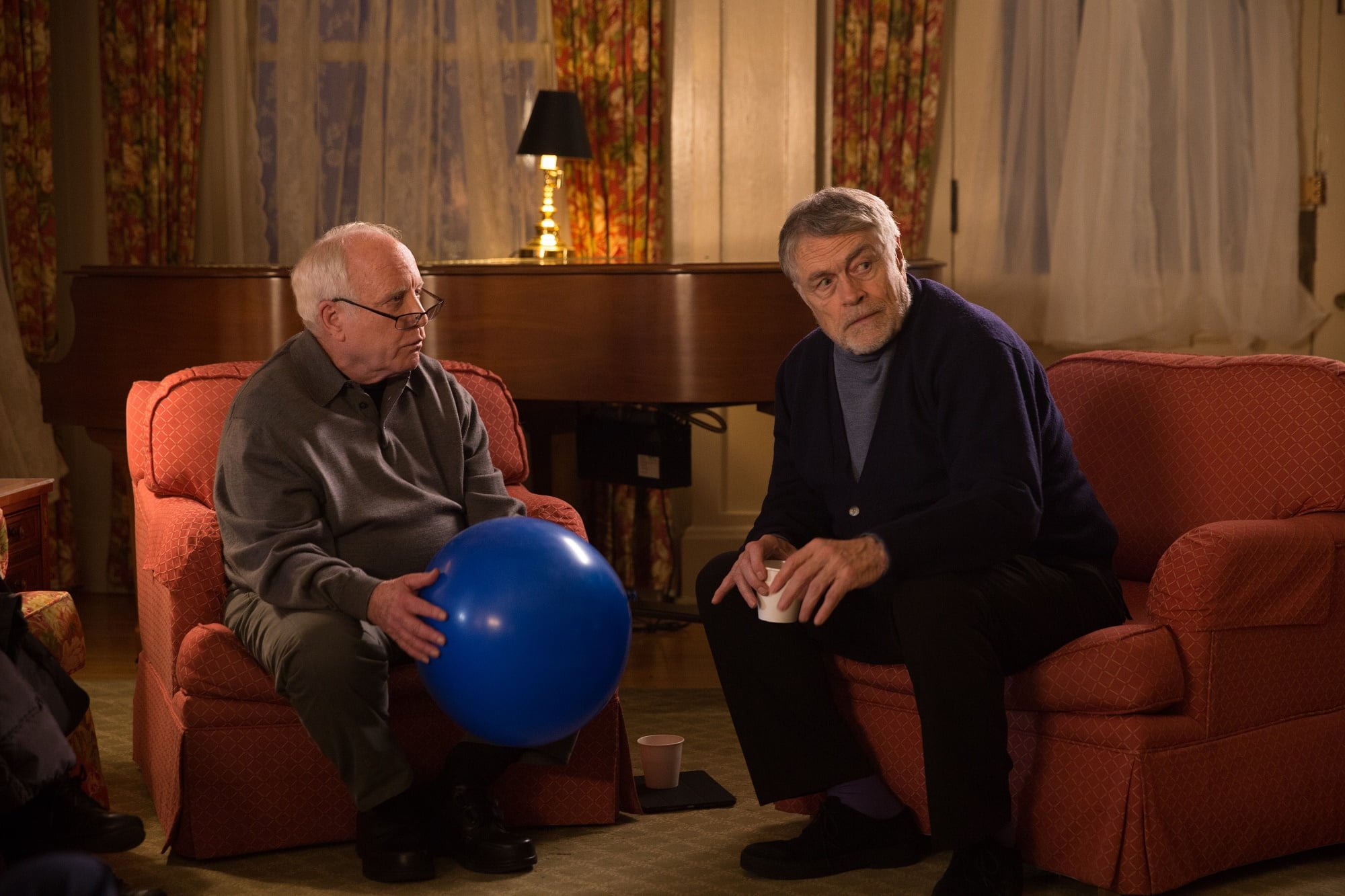 Harmless, but ineffective, the feel-good drama Astronaut almost takes off thanks to its lofty premise only to come crashing back down to earth due to an inconsistent tone. Buoyed throughout by a fine performance from Richard Dreyfuss and an intriguing (if rather implausible) concept from first time feature writer and director Shelagh McLeod, Astronaut is the kind of film that thankfully isn’t as precious and twee as many other Canadian projects pitched at this particular level of movie-making, but McLeod commits the error of taking its story in an interesting direction without knowing how to follow through on its sudden, but more intriguing shift.

Dreyfuss stars as Angus Stewart, a retired, 75-year-old civil engineer, widower, and astronomy enthusiast with a mounting list of health problems. His son-in-law, Jim (Lyriq Bent), is pushing for Angus to be sent to a nursing home, a decision that his daughter, Molly (Krista Bridges) reluctantly agrees to and his science loving grandson, Barney (Richie Lawrence), can’t stand. Angus hates it at his new home, where most of the residents (including Graham Greene as a non-verbal patient and Art Hindle as the resident eccentric) are lonely people simply waiting out their days until death arrives. Angus finds a way out of his situation when Barney pushes his gramps into joining a unique lottery that speaks to their shared love of interstellar travel. An Elon Musk-type billionaire (Colm Feore) is looking for everyday people to take part in the first ever civilian ride into space. 12 applicants will be chosen from a random draw and then placed into a reality show styled competition where the public will choose the final travellers. Applicants have to be between the ages of 18 and 65, so Angus fudges the numbers for a shot at a dream he gave up on decades ago, much to the delight of his grandson and the chagrin of his son-in-law.

Astronaut has built a consistent core around Angus, who’s a well rounded character in a film chock full of otherwise inconsistent ones. Dreyfuss balances Angus’ mounting depression, perpetual frustration, and unbridled optimism nicely, and McLeod has given him plenty to work with. It’s just a shame that most of the other characters in Astronaut – with the exception of Karen LeBlanc, who has a nice supporting role as one of the mission’s chief engineers – change their tone from scene to scene, bending to the whims of whatever easily identifiable emotions the script wants the audience to feel. It’s hard to tell if Molly is sympathetic or a pushover, or if her son is smarter than he looks or too enthusiastic for his own good. Feore’s mysterious billionaire vacillates between being a benevolent Willy Wonka type and someone with a narrow minded, self-serving vision. Bent has it hardest of all, however, as his character bounces wildly between being helpful and outright villainous. Angus is a clear minded character that has been constructed with a strong sense of vision, and Dreyfuss brings added levels of charm and respectability to Astronaut. All the other characters feel like they’re sometimes being reprogrammed at random. All of the actors are rather good, and McLeod’s strong directorial sensibilities cover for some of this, but the storytelling shortcomings are noticeable throughout.

While McLeod’s direction is assured, it’s also rather stock, and has a quality that’s just slightly above made-for-television movies. Astronaut frequently leans on tight close-ups, easy jokes about growing old, and musical cues so unsubtle one can almost see someone underlining every moment of the film as it unfolds. It’s not the most inspired way to make a film like Astronaut, but McLeod’s approach definitely follows the “inspirational geezer” movie playbook studiously and competently. She’s leaning harder into the family drama and senior movie tropes of Astronaut, and given the film’s gradual unravelling in its second half, that feels like the right decision.

Astronaut takes a turn for the interesting around the halfway point, and it almost explodes into new and more interesting life. When Angus starts putting his civil engineering hat on and looking closer into the mission he might be signing up for, he starts to realize that the trip isn’t as safe as its creators think, and naturally no one wants to believe the old man who could undo billions of dollars worth of testing with a few carefully placed observations. Astronaut briefly pivots and turns from a standard dramedy about an old guy trying to show that he still has what it takes (even though the film’s “contest” is limited to some medical tests and an on camera interview, which is as disappointing as it is unbelievable), and more intriguingly becomes a riff on the classic “guy who nobody believes is actually right about everything” plot. The problem is that as soon as that direction gets started, McLeod immediately reverts to the story about Angus being fed up with living at the old folks home. Just as Astronaut has built to a cool justification for the film around it, McLeod and the production choose safety over intrigue. It also plays into an ending that feels both intriguingly ambiguous and curiously unearned. Nothing lands like it should in Astronaut, and the whole enterprise remains earthbound.

The final result of such a shift and a script populated with wishy-washy characters is a film that’s hard to get emotionally invested in beyond the thinnest of interesting concepts and a great performance from Dreyfuss. There are some ambitious ideas peppered throughout Astronaut, but this one feels like a production that has been handcuffed by budgetary constraints and a desire to keep things safe and easily palatable to appease network television programmers. It’s not a bad movie by any stretch, but it’s definitely a flawed one with some great elements that should be a lot better than it turned out. I’d love to see a version of this with a bigger budget and more freedom to explore. Instead, Astronaut is a boilerplate crowd pleaser that’s as effective and satisfying as a frozen microwavable pizza.

Check out the trailer for Astronaut: