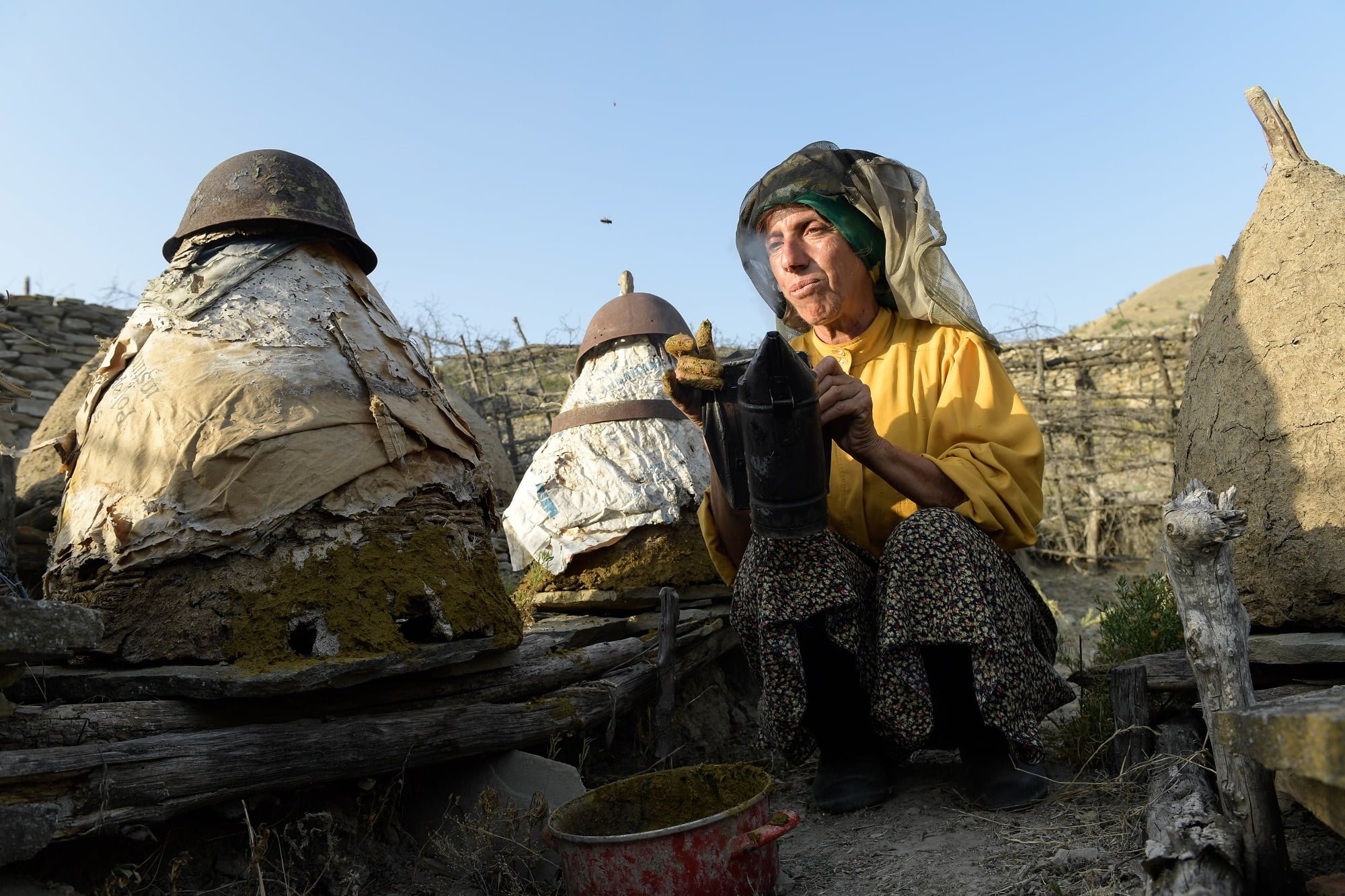 Honeyland has become one of the most talked about documentaries of the year, and it’s not hard to see why. It’s an unassuming work from the outset, slowly creeping up on the viewer before punching them in the gut with the harsh weight and full force of reality. For the first thirty minutes or so, some viewers might be wondering why Honeyland, from first time feature filmmakers Tamara Kotevska and Ljubomir Stefanov, has resulted in such a remarkable outpouring of praise and awards since its North American premiere at the Sundance Film Festival, where it justifiably picked up a World Cinema Grand Jury Prize for Documentary and another equally deserved recognition of the film’s gorgeous cinematography. But once it becomes apparent exactly the sort of story that Kotevska and Stefanov have stumbled upon, Honeyland will shake viewers to their very core and force them to wrestle with facets of human nature that often go ignored. Honeyland is a documentary so powerful in its observational approach that it’s impossible to shake its effects off by saying “it’s just a movie.”

It’s a near perfect encapsulation of so many of the world’s ills that hails from one of the most unlikely and least thought about places: the Balkans. In the mountains of Macedonia resides Haditze Muratova, the country’s last remaining wild bee keeper. Turkish born, well into her fifties, single, childless, and caring for various pets and her ailing, elderly mother in a shack with no electricity or indoor plumbing, Haditze cultivates honey from a couple of different hives in her area – one of which is precariously hidden away along a narrow cliffside – occasionally selling her wares in the nearby city of Skopje for between 10 and 20 Euros a jar, depending on quality and how good of a season it has been to that point, with her peak harvests coming in early fall. She has been doing this for decades, and her bare handed cultivation methods (although she does wear a mask and carry a smoker) have served her well.

Enter Hussain, her new neighbour, a fellow Turk and married father of seven. They arrive with plenty of cattle and chickens, but when Hussain hears Haditze talking about much she makes from selling honey, a light bulb goes off over his head, and he decides to get into the beekeeping business. Haditze tries to impart her years of expertise and wisdom, constantly telling her neighbours to take only half the honey and leave the rest for the bees. Pressured by family members and a desire to make a quick buck, Hussain, who has zero beekeeping experience, ignores everything his neighbour taught him, courting severe consequences for all parties involved. 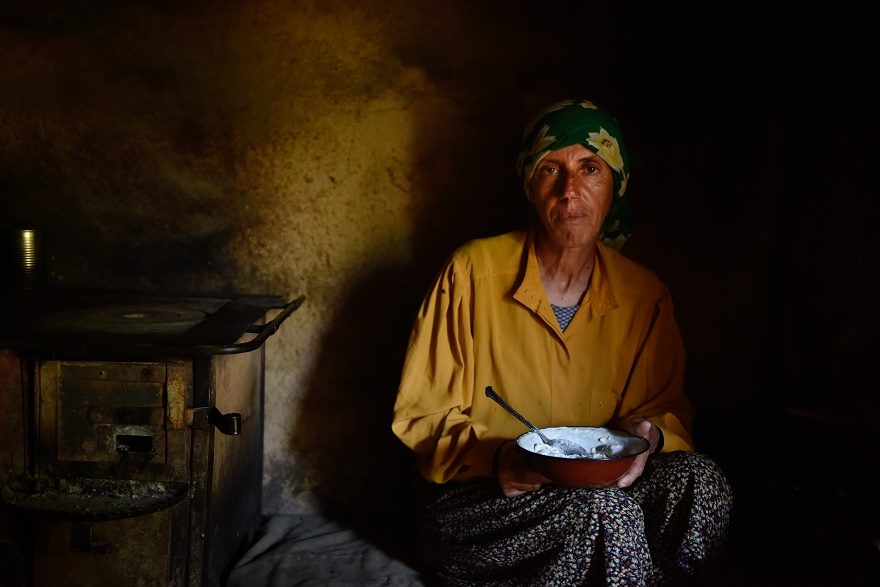 Things only get worse for the subjects from there, but Honeyland takes quite some time to get to that point. Kotevska and Stefanov lure viewers in by setting a rather hypnotic and picturesque stage, preferring that viewers get to understand the lay of the land and the rhythms of Muratova’s daily life before delving into the problems afoot. There’s no prompting from the filmmakers, nor any external context beyond the things that come up in casual conversation. Honeyland takes a rigidly objective approach, making it appear like the filmmakers had no clue that they could be stumbling upon a microcosmic look at modern greed and politics played out in the middle of nowhere. In truth, this approach does lead to Honeyland leaving some dangling , unanswered questions about Haditze and her life. How long has it been since she had neighbours? Were there ever bust periods in the past, and if so, how did she deal with them? What brought Hussain and his large family to the mountains, and specifically why that settled upon patch of land that seems so inhospitable to raising cattle? There are moments – like watching Haditze taking a bus into town and a trip to a county fair – that make it seem like these people aren’t as isolated as it initially appears, and one wants to learn more about the communities that lie not too far away. (Or if they are far away, it would be nice to have a sense of how far that is.) Honeyland has also succumbed to some post-production tinkering that adds a few on the nose moments that feel inorganically manufactured, most notably the on-the-nose use of an English language pop song that comes on Haditze’s radio not once, but twice and a handful of obviously amped up buzzing sound effects.

Not everything about Honeyland adds up perfectly, but it doesn’t have to. The drama is there for all to see, and Kotevska and Stefanov refuse to look away or skew the bits that truly matter most. The dispute between the seasoned woman and the sometimes amusingly inept family man is the stuff great comedies and tragedies are made of, and Kotevska and Stefanov (who have previously worked together on various sustainability projects) seize upon it for all of its immediately identifiable details and subtexts. Honeyland is the type of documentary that looks like the directors were intending to make a somewhat inspirational profile of a woman who perseveres in the midst of the global honeybee crisis, but it quickly pivots into darker territory that doesn’t always explicitly tie into ecology. Honeyland functions best and most profoundly as a depiction of toxic men who refuse to listen to women, regardless of their experience level and life’s work. At the same time, it’s difficult to hate Hussein because his family is clearly desperate and already impoverished enough. They don’t have much left to lose, so getting greedy with their new business venture is weirdly understandable, if decidedly unethical. Even Haditze admits at her lowest point that she might’ve handled things similarly if she was married or had kids. The battle between Haditze’s philosophy of not taking more than you need and Hussain’s belief that everyone loves having a little extra is precisely the kind of thinking that dominates liberal and conservative political discourses around the globe. One could replace the titular product of Honeyland with money, drugs, weapons, or any other commodity from lithium to oil, and if played out among similar characters, the end results would probably be the same.

Honeyland turns brutal, not just in terms of the overall toll on human and animal life, but emotionally, as well. Watching the ultimate betrayal of trust that happens between the neighbours is one of the most gut-wrenching and infuriating moments in any film this year. The fallout of the events depicted in Honeyland feels sadly inevitable after awhile, but the filmmakers make sure that the audience bears witness to every uncomfortable bit of it, operating as the antithesis of one of this year’s other wave-making documentaries, The Biggest Little Farm, which looks at inexperienced farmers in a vastly more positive and hopeful light. The drama in the second half of Honeyland becomes almost unbearable, but this is the world we live in today; an unbearable one with faint slivers of hope here and there. The mountains of Northern Macedonia might feel like another planet to some viewers, but everything that happens in Honeyland is currently transpiring somewhere in the world at this very moment with different players, different commodities, and similar outcomes. Viewers would do best to never forget that.

Check out the trailer for Honeyland: