Review: Light of My Life

Predictable, uninspired, and stretched as thin as it could possible go, writer, director, and star Casey Affleck’s father-daughter drama Light of My Life takes forever to go absolutely nowhere interesting. What’s worse is that the well worn path to said nothingness has been travelled many times before by better filmmakers with more poignant and reflective things to say about the bond shared between children and their parents during difficult and trying times. Light of My Life is the sort of high concept drama that takes itself far too seriously and delusionally believes that all of its recycled ideas are somehow poignant, refreshing, and philosophically deep. Save for the fact that this is meant to act as a “comeback” vehicle of sorts for Affleck, Light of My Life is virtually indistinguishable from any of the films and directors it’s shamelessly trying to mimic. Thematically, and for better or for worse, Light of My Life sounds like the kind of film Affleck would make, but stylistically and emotionally it comes across like something that might as well have been made from an algorithm.

Light of My Life is one of those post-apocalyptic movies set ten years after a mysterious virus has wiped out half of the world’s population. Caleb Shaw (Affleck) and his eleven year old daughter, Rag (Anna Pniowsky), have been constantly moving around and trying to go unnoticed, hiding in and around the woods of what I assume is the Pacific Northwest (considering that the film was shot in British Columbia and looks very much like it). Caleb dresses Rag up like a boy and passes her off as his son to any passerby who happen to inquire, for reasons that I’ll get to in a moment. That explanation will surely give pause to anyone who has been skeptical of Affleck’s status in Hollywood following sexual harassment allegations, but Light of My Life falls on its face well before that reveal arrives early on.

Light of My Life opens with father telling his daughter a riff on the story of Noah’s Ark that includes a rival boat full of animals and an Australian accented Noah (because it makes his little girl laugh). It’s a terrible scene to start a movie with, lasting almost fifteen ungodly minutes and coming across like an improv exercise that should’ve been mercy killed in the editing room. It has almost nothing to do with the story, and Affleck stumbles and stammers his way through this scene, clearly making it up as he goes along. It’s painful to sit through, but it certainly sets the tone of everything that’s going to follow. There are half a dozen such scenes peppered throughout Light of My Life where Caleb has to explain something awkward or heartbreaking to his daughter in lengthy, cringe-worthy detail, most notably during one of the worst “this is how babies are made” conversations in cinematic history. Affleck plays Caleb admirably like a father who has been put on the spot and needs to come up with some quick answers, but it’s clear that the actor can’t stick to his own script or provide even a shred of direction. The pacing of Light of My Life is positively abysmal. If Caleb and Rag aren’t walking or driving to their next destination, they’re having needlessly long, uninteresting conversations that tell us nothing about who these people are in any great detail and instead offers up only the most basic of father-daughter cliches.

Light of My Life is cobbled together from a variety of obvious influences. It’s trying to do the exact same things that were attempted by the likes of The Road and Leave No Trace, but without any sense of urgency or malaise, despite evidence of obvious dangers. The plot points are easily identifiable: dad is hiding truths from his daughter; mom (Elisabeth Moss, in a pointless, thankless cameo) has died long ago, but she lives on in dad’s memories and the flashbacks we have to sit through; Rag wants to be taken more seriously and treated like more of an adult; she wants to behave and appear more like a young woman; dad knows more about the dangerous roving packs of men in hideous looking tracksuits than he’s letting on; there are some other guys who appear who seem like they could be cool, but then again, maybe they aren’t; dad will do anything to protect his daughter; if they just keep moving, they’ll be safe, but Rag dreams of settling down and staying in a house for a bit instead of a tent in the woods; dad hates the idea of staying in houses or asking people for help; and so on and so forth and you can probably guess a lot of everything else. None of this is shocking, but it’s all handled as morosely as possible by Affleck, who gets blown off the screen by his younger co-star, Pniowsky, with her emerging as the only dramatic spark to be found in Light of My Life. 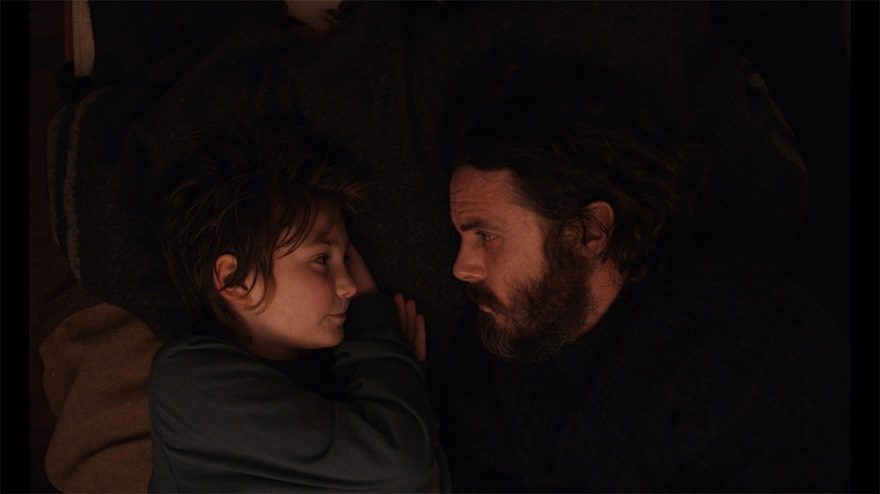 On a visual level, Light of My Life is admirable, but it’s also hard to make unspoiled, rain-soaked forests look hideous. Affleck is clearly trying to visually emulate the types of movies he previously made with writer-director David Lowery. The score swells, brooks babble, leaves rustle, and natural lighting abounds, but Lowery’s restrained, ethereal, and naturally gothic tendencies still elude Affleck. With Light of My Life, Affleck wants to make a film that’s visually striking and contemplative, but he has put far greater stock into his dreadfully threadbare and tired script. By placing more focus on words – or more appropriately onto speech patterns, since nothing being said is all that interesting – Affleck wastes his picturesque locations in service of material that’s too talky for its own good. If Lowery had made Light of My Life, it might’ve been a good movie. It would probably be almost silent, and it would assuredly run a full thirty minutes shorter than Affleck’s unambiguously indulgent two hour running time.

Speaking of things that aren’t ambiguous in the slightest, I would call the big reveal that happens about a quarter of the way into Light of My Life a twist if it wasn’t so obvious from the moment Affleck ends his incredibly long story at the film’s opening. The virus that decimated humanity apparently only affected women. It’s hinted that there are still women in the world, but Rag hasn’t seen any for herself, and those that remain are hunted by roaming packs of men and coveted like precious resources. It certainly explains why Caleb has to keep his daughter’s identity a secret, but it also opens the filmmaker up to a host of other questions that he’d probably prefer not to answer.

This script probably wouldn’t have made a great movie regardless of who directed it, but with Affleck at the helm, Light of My Life seems like a lightning rod for potential ridicule and endless amounts of hot takes. While I’m certain that Affleck would love to get on with his life and look like an ally to women everywhere with this story of a devoted father who both protects and learns from his growing daughter, this is precisely the last kind of story he should be trying to tell at the moment. Light of My Life is so half-baked and ineffective that it’s impossible to tell if Affleck’s overall point of view is bitter, confused, or conciliatory. I assume from the main character musing that this film’s hellscape would become balanced when women are allowed to take over that Affleck wants to heal old, off-screen wounds, but without any sort of pulse or backbone to the material, it all comes like listening to someone reading an automobile driver’s manual aloud. Then again, those limp apologies within the text of Light of My Life are certainly more palatable than the borderline transphobic implications of the story, which makes far too big of a deal out of Rag’s outwardly male-but-not-passingly-male appearance.

If Light of My Life were a better or worse movie than it actually is, such material would be a powder keg waiting to ignite. Instead, it’s a pack of matches that’s been dropped in a lake. There’s a lot that can be said about Light of My Life, but none of it really matters when the film is this dull and endless. It’s not the sort of conversation starter that Affleck clearly wants it to be, nor is it the kind of spark that his detractors fear. In the moment, one can certainly read a lot into this. After the moment has passed, you’ll be hard pressed to recall much of anything that happened. Light of My Life might not be one of the worst films of the year or even a contemptible one, but it is one of the worst things any movie can be. It’s thoroughly forgettable.

Light of My Life opens at Carlton Cinemas in Toronto on Friday, August 9, 2019. It screens for one night only at select Vancouver area Cineplex locations on Monday, August 12. It’s available digitally and on VOD across Canada on August 9.

Check out the trailer for Light of My Life: