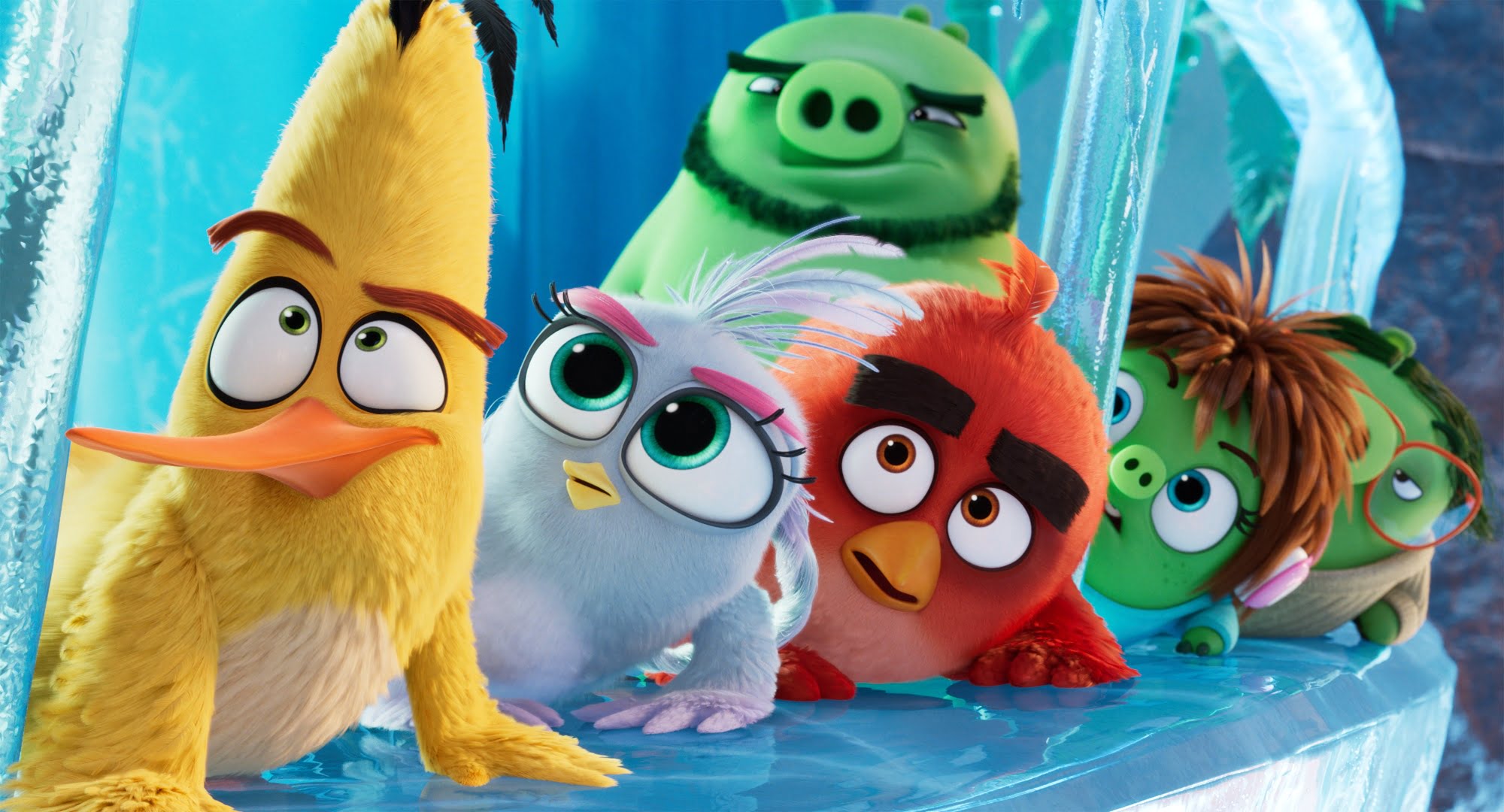 While it doesn’t take much to improve upon its predecessor, the mediocre, yet competent animated sequel The Angry Birds Movie 2 isn’t anything particularly worth crowing about. Instead of being a limp attempt at trying to adapt a video game to the big screen, The Angry Birds Movie 2 is trying – somewhat respectably – to be a forgettable, colourful bit of nonsense on its own terms. It’s patently dull trying to sit through this as an adult, but I suspect this is the type of movie that’s been made loud and frantic enough to quiet young, screaming children long enough for parents to clean the rest of the house in peace. It’s one of those movies packed with stale punchlines, plenty of slapstick, bright colours, and not much of anything else.

Picking up shortly after the events of the first movie (but don’t worry if you didn’t see it because this sequel barely cares about its own plot, let alone something that came out a couple of years ago), we find the irritable, but heroic Red (again voiced by Jason Sudeikis) heralded by the inhabitants of Bird Island as a hero. The “prank war” between Bird Island and their pudgy, green faces nemeses on Piggy Island (which started when the latter wanted to steal and eat the eggs of the former, which sounds like something way worse than a prank, if you stop to think about it) rages on seemingly without end. A truce between the birds and the pigs is reached when giant balls of ice start raining down on both islands. The source of such aggressions is coming from the recently discovered Eagle Island, an inhospitable frozen wasteland overseen by the brilliant, but crazy Zeta (Leslie Jones), who wants to move to a more tropical home and is willing to destroy anyone and anything to make it happen. Red – aided by his buddies Bomb (Danny McBride), Chuck (Josh Gad), and Chuck’s brainiac sister, Silver (Rachel Bloom) – form an alliance with their chief antagonist, Leonard (Bill Hader), and some of his cronies to put a stop to the purple plumed Zeta’s reign of destruction and save their respective islands.

The Angry Birds Movie 2 gets off to a decent start, but not thanks to any of the actual storytelling, jokes, or any sort of emotional good will. If nothing else, The Angry Birds Movie 2 is quite striking to look at, and it’s easy to be captivated by the images alone. There’s almost infinite detail in every feather, tree branch, ocean wave, and grain of beach sand that it’s impossible to be unimpressed. There’s so much depth to the animation that one doesn’t need to see the film in 3D to think there’s an additional dimension to all the moving parts. On a visual level, it’s an exceptional calling card for first time feature director Thurop Van Orman, but on a narrative level, it’s just another basic story about former foes teaming up to take on a common enemy. The four F’s take centre stage here – floofy, fluffy, fuzzy, and feathered – and The Angry Birds Movie 2 certainly sticks to its strengths in those categories.

The jovial vibe of The Angry Birds Movie 2 is akin to that of an old school Saturday morning cartoon, or perhaps more appropriately, like one of those 30 minute shows has been blown up to feature length with lots of unnecessary padding to clock in at a more respectable theatrical running time. To say that the story cooked up by writer Peter Ackerman (who worked on a couple of Ice Age films and the vastly different television drama, The Americans) is threadbare is an insult to thread. There’s some nostalgia to be found in that kind of simplicity, I guess, but that doesn’t make it good. As soon as the characters have been reintroduced, the plot is set into immediate motion and it’s all wrapped up without many deviations. There are subplots involving the rivalry and flirtation that happens between Red and Silver, and a trio of hatchlings trying to retrieve some eggs they’ve misplaced, but for the most part The Angry Birds Movie 2 is a strictly point A to point B affair, which is both merciful and uninspired. I have to give it some points for setting itself apart from its predecessor, which spent far too much time trying to tie into Rovio’s best selling downloadable time waster than it did coming up with an engaging story, but The Angry Birds Movie 2 is like the difference between eating nothing all day and trying to choke down a slice of day old white bread. 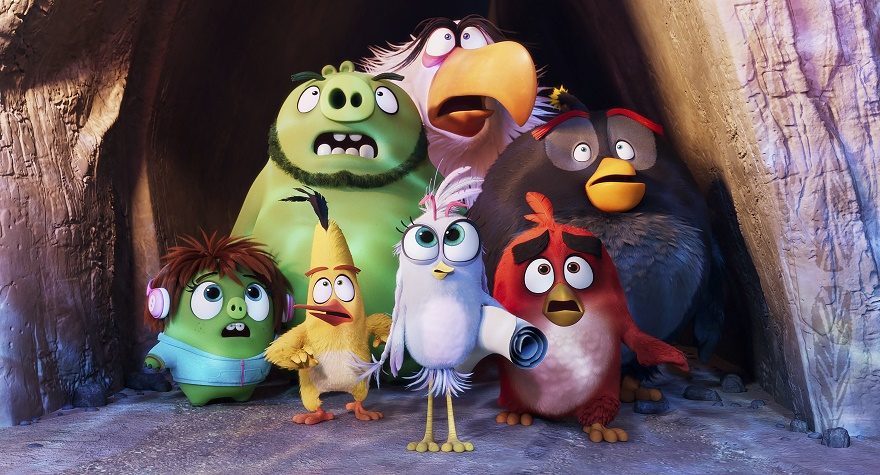 Between the requisite jokes about snot, poop, and pee-pee, there are a couple of admittedly funny flashes of ingenuity to be found throughout The Angry Birds Movie 2. An extended 90s-set flashback that shows how Zeta got her heart broken by Red’s cowardly buddy Mighty Eagle (Peter Dinklage) squeezes out some genuine chuckles, even if the jokes are pretty easy to make. There’s a really satisfying section towards the end where Leonard and the gang try to infiltrate the villain’s fortress by wearing a hideously unconvincing costume that almost saves the entire movie. The voice cast is really just there as a means to an end, but Bloom and Jones bring a lot of life as the new additions, and few people are as adept at playing an oblivious dumb-dumb as McBride.

What isn’t funny is the fact that The Angry Birds Movie 2 seems to have been ghost directed by a sentient Spotify playlist (probably the same one that edited Suicide Squad), with far too many scenes relying heavily on instantly recognizable needle drops in place of real punchlines. From “Turn Down for What” to “Axel F.” to “Baby Shark” to “The Final Countdown,” the song choices throughout The Angry Birds Movie 2 add nothing except cultural signposts that never work beyond simply getting instantly recognizable tunes stuck in viewer’s head. It’s a tactic that not only isn’t funny, but it also becomes more memorable than anything the filmmakers have come up with. It’s the most egregious use of a soundtrack budget that has been paid for with a seemingly bottomless checkbook in recent memory. While I question how many youngsters will find themselves in stitches with jokes about speed dating or Jimmy Buffet references, I also wonder how many of them will be tempted to seek these songs out after the movie. If these things are in the movie for the sake of the adults in the audience, they shouldn’t have bothered.

There are some moments of visual and comedic ingenuity peppered throughout The Angry Birds Movie 2, but it has been made with almost no storytelling ambition whatsoever. It’s as basic as kiddie pictures tend to get these days, but it’s certainly energetic, colourful, and loud, which makes it a perfect, but cynically crafted babysitting aide. It’s a film made with the belief that kids won’t care what’s happening as long as it’s wacky, and for the most part, it’s not altogether wrong to think that. That doesn’t make this any more pleasant or easy to sit through if your age has reached double digit numbers, but it does know its audience well enough to know what the bare minimum is.

There is something worthy of high recommendation attached to The Angry Birds Movie 2, however. The feature is preceded by a short film called Hair Love, and it’s the best non-Pixar short produced by a major studio in decades. A disarmingly moving, nearly worldless, and sweet story of a young black girl trying to get her unruly afro under control with the help of her clearly hapless father, Hair Love is a work of honest art and emotion that handily eclipses the feature that follows it. Boasting a genuinely heartfelt story and a lovingly crafted hand-drawn aesthetic, Hair Love is absolutely worth seeking out and supporting. The Angry Birds Movie 2, not so much.

Check out the trailer for The Angry Birds Movie 2: