Review: After the Wedding

Although it probably works best if you haven’t seen the original movie its based on, After the Wedding remains a well told story of privilege, charity, and suppressed feelings. Although the genders of the primary characters have been swapped between Danish filmmaker Susanne Bier’s Oscar nominated 2006 original and American writer-director Bart Freundlich’s remake, all of the themes inherent in the first version of the story have aged well. Freundlich (The Myth of Fingerprints, Trust the Man) doesn’t tinker too much with Bier’s material, offering a faithful, well acted updating that does its best to never seem redundant.

Isabel (Michelle Williams) is an American expat living and working at an orphanage in Calcutta, India that’s in desperate need of donors. Theresa (Julianne Moore) is the successful head of a media placement company, who’s living a lavish lifestyle in the New York City suburbs with her husband, Oscar (Billy Crudup), her soon to be married adult daughter, Grace (Abby Quinn), and their two younger sons. Theresa, who’s about to become even richer through the sale of her company, is circling the idea of funding Isabel’s orphanage, but there’s a catch. Theresa is willing to donate two million dollars, but Isabel has to show up to her office in person and explain why the orphanage deserves the funds. Not at all keen on the idea of having to explain herself to someone and thinking that her work with the orphanage speaks for itself, Isabel reluctantly agrees to go back to the States. When she gets there, Theresa, who seems more focused on Grace’s nuptials than philanthropic matters, does everything she can to delay giving Isabel the money. Theresa essentially forces Isabel to stay – beyond her wishes – for the wedding that weekend. At the wedding, and almost as soon as Isabel locks eyes with Oscar, it’s clear that there’s more to the situation than meets the eye, and things will get more complicated, awkward, and contentious after the ceremonies.

Much Like Bier’s original – which has generally the same structure, pacing, and tone – Freundlich’s take on After the Wedding gets off to a great start. Before it turns into a different sort of domestic drama, After the Wedding opens with an intriguing comparing and contrasting of Isabel and Theresa’s lifestyles. Isabel works with marginalized children every day of her life, and she has little patience for the egotistical whims of people who waste precious time, and therefore endanger the physical and mental well being of others. Isabel knows that Theresa wants to be a philanthropist, but she also thinks that her potential benefactor is just playing nice to alleviate her own white guilt. The first we see of Theresa, she’s making deals and singing along to Lady Gaga’s “Edge of Glory” at the top of her lungs in her SUV en route to her Oyster Bay home. But once the viewer is allowed into Theresa and Oscar’s home, she doesn’t seem like a bad or phony person in the slightest. Theresa shows love to those around her, and seems to be loved and respected in return. Their approaches to the world around them are as different as oil and water, and After the Wedding initially seems like its building to a clash between the two personalities and their approaches to charitable giving. 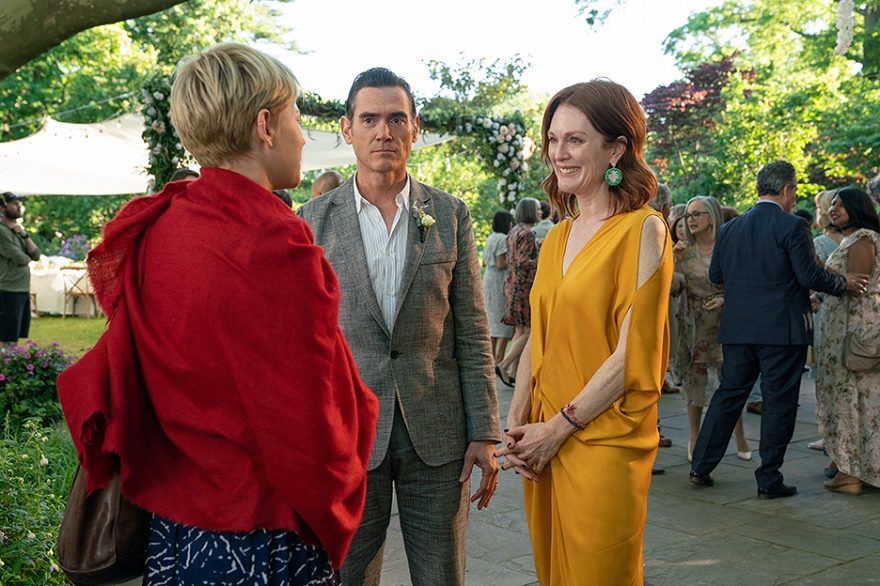 It does and it doesn’t. It spoils little (especially, again, if you’ve seen the original) to say that the first of Freundlich’s big twists arrives just after the wedding, and the gender swapping of the protagonists doesn’t change much of anything at all. After the Wedding somewhat stops being about the nature of privilege, and instead becomes something a lot more emotionally amorphous and easily understood by a broader audience. That twist is followed by another big reveal late in the film that explains how old conflicts were able to arise and how new ones were created out of necessity. The first twist isn’t a bad one, but it does take things in a more conventional, less socially conscious direction, while the second is the kind of thing that you’ll either buy into or you won’t. One twist is fascinating, and the other could find just as great of a home in a Hallmark movie.

Freundlich isn’t as impactful with images as Bier, but he still manages to make After the Wedding somewhat visually interesting by utilizing some rather wide, detailed framing to elevate a script that’s built almost entirely around lengthy, awkward conversations. It’s also a lot more opulent than Bier’s stripped down, hand held aesthetic, meaning it certainly looks the part of a streamlined Hollywood remake. He’s also not as broad of a dramatist as Bier, occasionally opting for subtlety over shouting, but that might also be a byproduct of his casting choices. The tweaks are subtle, and while they might be dampening the overall forcefulness of Bier’s original, the emotional weight of the material remains virtually unchanged. If you want the version of the story with less shouting, this is the one for you.

Williams is a perfect audience surrogate as Isabel. She’s often allowed to express precisely what most of the people in the audience are thinking about the other characters, but the actress also adds a bit of an edge to the character. For someone who prides herself on helping others in their time of need, Isabel is quick to pass judgment on the attitudes and actions of others; sometimes rightly, sometimes incorrectly, but Williams always makes sure that the character is one built on her unwavering convictions. It pairs nicely with Moore’s typically strong riff on secretly insecure Type-A personalities who want to discuss and analyze things to death. Williams and Moore (who’s married to Freundlich off screen) have a great contentious chemistry, and it’s enhanced whenever Crudup’s sometimes sympathetic and sometimes caddish husband or Quinn’s caught-in-the-middle daughter are added to the dramatic mix. The film mostly belongs to Williams, until the point when it’s revealed what Theresa is getting out of having Isabel stick around so long, then Moore takes centre stage. It’s how the material is written, and how it was performed in the past with male actors, but the hand off remains nicely staged and thoughtfully performed.

After the Wedding won’t erase any memories one might have of the original, but what they think of either version they see will likely be the same for the other. If they liked the original, they’ll probably enjoy this Americanized version, but not be blown away by it. Similarly, if one likes Freundlich’s take and they seek out Bier’s version, they’ll wonder why it needed to be remade at all. Despite the twists, After the Wedding is a movie that feels very familiar, but in an age where the wealthy toy often only pay lip service to helping those in need, it’s totally at home in the modern movie landscape. Then again, all of that happens before the first major twist. After that, it’s up to Freundlich to put in enough tiny changes and new details to set itself apart. After the Wedding does just enough of that to still feel refreshing and relevant.

After the Wedding opens at Cineplex Varsity Cinemas in Toronto and Cineplex International Village in Vancouver on Friday, August 16, 2019. It expands to Montreal on August 23 and additional Canadian cities throughout the summer and fall.

Check out the trailer for After the Wedding: