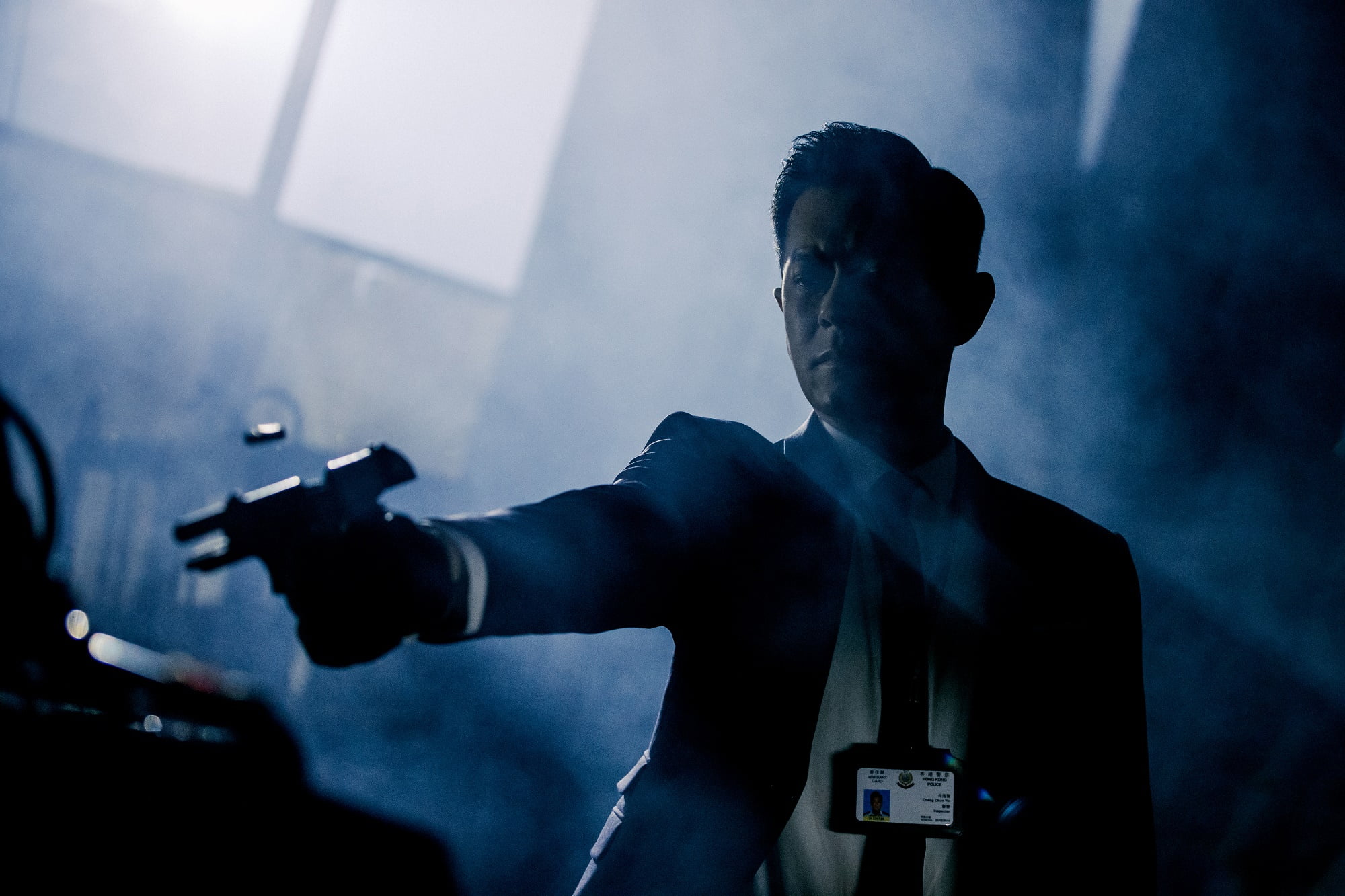 A sleek and pleasingly silly bit of late summer action and machismo, the Chinese action thriller Line Walker 2: Invisible Spy will scratch the itch of anyone who wants to watch something with a ridiculous plot, hard boiled performances, and a handful of impressive set pieces. The plot doesn’t make a lick of logical or narrative sense, but after about thirty minutes of trying to keeps its overlapping and constantly shifting spy and undercover cop movie cliches straight, viewers will realize that Line Walker 2: Invisible Spy isn’t relying on its story to keep viewers entertained. Turn your brain off, ignore the things that don’t make sense, revel in the satisfying action, and you’ll be good to go.

Line Walker 2: Invisible Spy sounds like a sequel, but it really isn’t. The first Line Walker arrived in 2016, and was actually spun-off from a successful television series that aired in 2014, created by returning director Jazz Boon and writer Cat Kwan. Line Walker 2: Invisible Spy even has the same three stars as its predecessor, but all of them are playing different characters this time out. Instead of them playing a trio of undercover cops whose identities have been burned and their statuses disavowed, Line Walker 2: Invisible Spy is one of those “suss out the mole within the department” movies, complete with all the ludicrous twists, double crossings, rug pulls, and red herrings one typically expects from that particular subgenre.

A billionaire CEO has recently committed a shocking and unexpected act of terrorism, driving his car into a crowd of people on a crowded Hong Kong street before killing himself. It turns out that the perpetrator was being blackmailed by a shadowy cabal that’s been known to kidnap orphans in foreign countries and train them to become spies and undercover operatives. A hacker and investigative journalist (Jiang Peiyao) has been picked up by the police, and she has evidence that could’ve prevented the terrorist attack. She also possesses encrypted files that will expose the evil organization and the location of their next attack. Inspector Ching To (Nick Cheung) and Superintendent Yip (Francis Ng) wonder why this information wasn’t made available to them sooner, and it’s not long before they deduce that there has to be a mole within the police department. Only 15 people knew about the information (17, if you count their actual sources), and any of them could be equally guilty. To and Yip begin a country hopping investigation that’s also being monitored by Officer Cheng (Louis Koo), a member of special investigative unit that operates secretly within the police force. 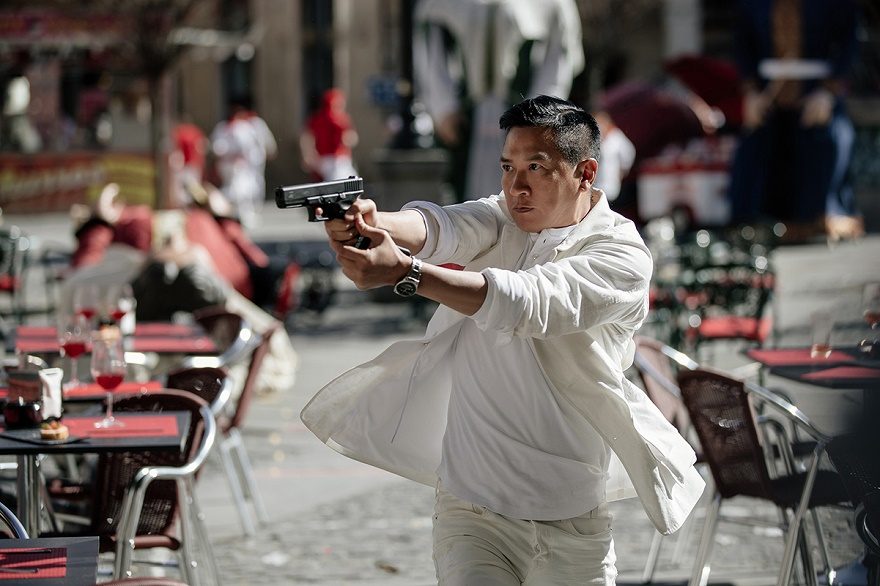 Or at least, I think that’s what’s going on in Line Walker 2: Invisible Spy. I thought I was missing something important when I first started watching this. It gets off to such a fast and furious start, even in scenes where people are just sitting around and discussing their options, that it felt like a big chunk of the story was missing. Then I went back and watched the first film and researched the television series, and then realized that I wasn’t missing anything at all. There’s just way too much plot to keep any of Line Walker 2: Invisible Spy straight, but that’s somewhat appropriate for this particular style of spy thriller where all the heroes and villains are impeccably dressed, and action sequences unfold in exotic, upscale locations. There are half a dozen scenes where characters will either take bullets for each other of slowly draw their weapons on one another, and all of the actors have to play their parts as if they could’ve turned out to be the mole all along. It’s a lot to keep track of, but around the halfway point when things come into sharper focus, and Boon and Kwan start talking about secret departments located within super secret departments that one realizes that not much of this matters, the answers are pretty obvious (do you think it has something to do with the film’s 1987, Philippines set prologue?), and that this is just a silly little, Mission: Impossible styled thrill ride, filled with nifty bits of spycraft, kinetic cinematography, and plenty of rapid fire edits that stop just shy of being annoying.

It’s clearly indebted to the cheesy and sometimes brutal Hong Kong action cinema of the 1990s, with Boon even adding in some CGI doves heading into the climax in a nod to the maestro of the genre, John Woo. While Line Walker 2: Invisible Spy stops short of being a full on bullet ballet (and also includes way more vehicular homicide and assault than most other action flicks), there are plenty of large scale shootouts and car chases to keep viewers amused. People chase each other on zip lines through the streets of Myanmar. The mismatched heroes have to basically fight their way through an army’s worth of enemy combatants with assault rifles. Best of all, the intricate finale of Line Walker 2: Invisible Spy is set during the Running of the Bulls in Pamplona, with a car chase and shootout happening in the midst of animals who want to gore and eviscerate everyone and everything in sight. It’s so clever, ridiculous, and painful looking that action movie buffs will be amazed that the John Wick franchise didn’t think to attempt these stunts sooner.

By the end of Line Walker 2: Invisible Spy, I was able to figure out more or less what happened over the course of it’s tightly packed and overstuffed running time, but if you were to quiz me on how we got there, I would probably flunk. If one were to try and unpack everything that’s going on here and explain it to someone else, they would probably lose interest, as the plot of Line Walker 2: Invisible Spy isn’t as exciting as watching Boon doing what he does best. It wants to remind viewers of the likes of Hard Boiled and Infernal Affairs, and while it isn’t nearly as well executed as those genre classics, Line Walker 2: Invisible Spy will assuredly appeal to anyone who misses those kinds of thrillers.

Line Walker 2: Invisible Spy opens in Toronto at Cineplex Yonge and Dundas and Cineplex Markham and in Vancouver at SilverCity Riverport on Friday, August 16, 2019.

Check out the trailer for Line Walker 2: Invisible Spy: