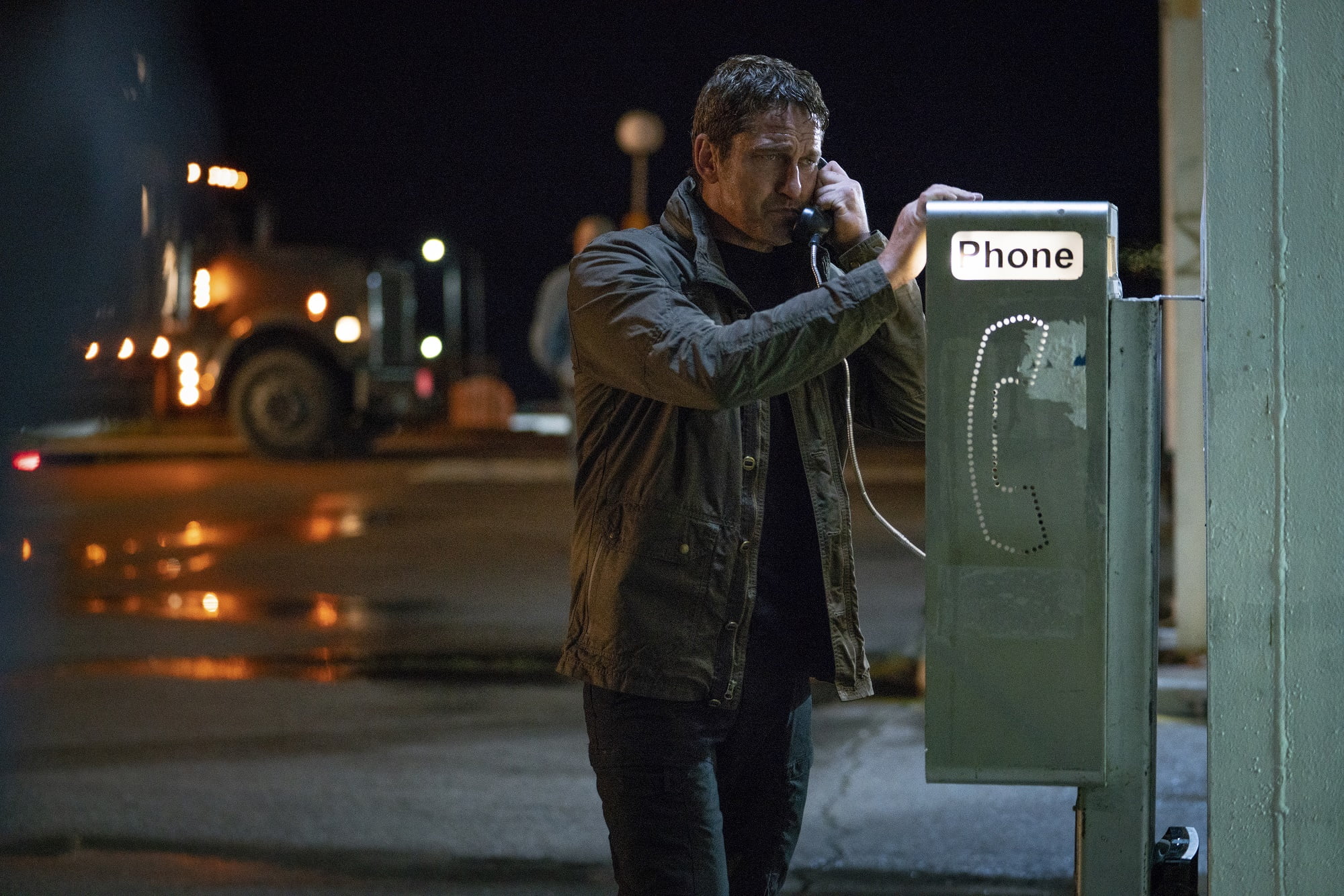 I don’t know what I was hoping to get from Angel Has Fallen, the latest entry in the inexplicably popular Gerard Butler starring action franchise about a high ranking Secret Service agent who continues to have terrible days on the job while with protecting the President of the United States. You go into every movie hoping for the best. You want to be entertained or moved or feel some sort of emotion, even if it’s an unpleasant one. Based on how little I enjoyed its predecessors maybe Angel Has Fallen was a case where I should’ve abandoned all hope at the door. I didn’t hope for much, but I got what I expected: a terrible, incompetently made action movie that’s so boring and cliched it would’ve put me immediately to sleep if it wasn’t so loud and obnoxious.

Surprise, surprise, the POTUS (this time played by Morgan Freeman) is in danger yet again, this time as a result of cancelling the contracts of private sector mercenaries-for-hire in war zones. Special Agent Mike Banning (Butler) is once again the President’s most trusted protector, but he has problems of his own. He has a wife (Piper Perabo) and young daughter to care about now. His past adventures have left him a painkiller popping mess, with severe spinal damage and post-concussion syndrome. He’s thinking of transitioning into a desk job as the director of the Secret Service. Before that can happen, however, some soldiers of fortune try to take out the president with a massive drone strike during a fishing trip. Banning saves the president in the knick of time, but the leader of the free world is left in a coma, and every other agent on site has been killed in the massacre. Coming to in the hospital after getting knocked out, Banning finds out that the FBI agent (Jada Pinkett Smith) investigating the assassination attempt is arresting him for the crime, after notcing that millions of dollars has just been dropped into an offshore account in his name from a Russian source. Knowing that he’s been set-up by a former friend (Danny Huston) keen on landing some cushy government contracts by any means necessary, Banning breaks out of custody in a bid to clear his name and stop the people behind the kill order from finishing the job on the president.

Directing duties this time out are handed off to stuntman turned director Ric Roman Waugh (Snitch) and the minimal script of cliches and tiresome speeches about personal freedoms is attributed to Waugh, Matt Cook (Patriot’s Day, Triple 9), and Robert Mark Kamen (the original The Karate Kid, The Transporter), working from a story by series creators Creighton Rothenberger and Katrin Benedikt. Nothing tends to surprise me anymore, so I’m not taken aback by how it took a total of five people to write something that a team of trained monkeys could turn out in about an hour – way before they ever got around to writing their masterpiece – nor am I surprised that Angel Has Fallen has a lot of stunt people flying through the air on wires away from massive explosions. My sheer apathy towards everything on screen, however, was surprising when one considers how morally reprehensible and unbearably goofy the first two franchise entries were. I despised Olympus Has Fallen and London Has Fallen with nearly every fiber of my being. As it turns out, that immense dislike was all that was keeping me invested to begin with.

Waugh opens Angel Has Fallen with one of the ugliest action set pieces ever created – a murky, visually incomprehensible training exercise – and somehow doubles down from there. Nearly every shootout and chase, with the exception of the assassination attempt that sets things into motion (where stuff blows up real good and the stuntpeople more than earn their paychecks), is shot in low lighting or pitch darkness, with the audience begging for an explosion simply so they can see what they hell is going on. The almost endless sequence where the villains attempt to spring Banning from his prisoner transport (the reasons for which are never explained, because who gives a shit?) is nothing more than watching Butler (or someone who we think is Butler) fumbling around in the dark and eventually making his way to safety. It would be laughable if it felt like anything was happening, but Waugh and his team of writers have somehow found a way to even make incompetence look boring instead of silly. Even during the film’s daylight set finale, Angel Has Fallen still proves to have no clue what it’s doing, staging a large scale shootout in a bank that’s so chaotic and choppy that it’s impossible to tell which dropping bodies are good guys and which are the villains. Say what one might about Olympus Has Fallen and London Has Fallen, at least those films had some sort of style. Angel Has Fallen might as well have left the lens cap on for the majority of filming. 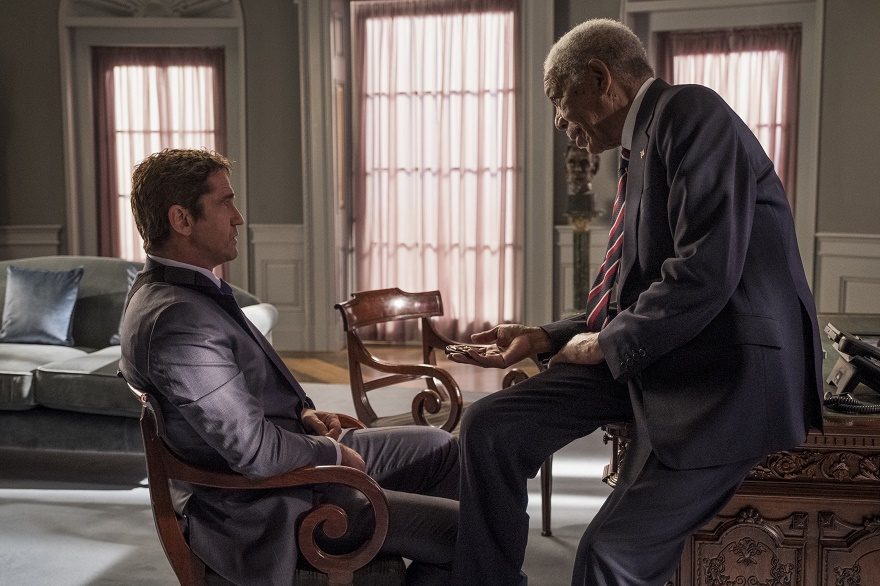 Angel Has Fallen shambles around from scene to scene as if it hasn’t even seen its ridiculous predecessors, content to take everything far too seriously for something this idiotic. The cast seems mentally checked out by such an approach to varying degrees. Butler could do this role by now in his sleep, and sometimes it looks like he might be doing just that. Freeman’s president literally sleeps through most of the movie, popping up at the beginning and end to do the bare minimum. Huston initially shows some chemistry with Butler as Banning’s chief adversary, but once the bullets start flying, there isn’t much left for him to do. Smith and Perabo try their best to inject some toughness into their roles, but it’s a losing cause for both of them. Tim Blake Nelson grimaces nicely as Freeman’s Vice President. (DO YOU THINK HE’S SECRETLY IN ON IT?!?!??!?!?!?!?!!!??) The only person pulling their weight here – or possibly elevating the film because of how little weight they’re pulling at all – is Nick Nolte, who proves to be the only nice addition to the cast as Banning’s estranged, survivalist, war veteran pappy. His gruff, no-nonsense demeanour and ability to turn even the most innocuous of phrases into something that sounds like a threat is refreshing. Nolte is the true hero of this movie in more ways than one.

Then there’s the matter of Angel Has Fallen’s ludicrous political viewpoint, which makes no sense whatsoever when placed alongside the previous entries. Olympus Has Fallen and London Has Fallen were so far to the right of the political spectrum that the Blu-Rays might as well have been packaged with MAGA hats. Angel Has Fallen – for no good reason whatsoever – takes a sharp turn to the left with a plot that hinges on Russian interference, electoral fraud, and the insidious nature of engaging in wars that are solely based on profits and not the protection of freedoms. I have no idea what caused the franchise’s sudden and inexplicable change of heart, but even that can’t make the increasingly tiresome escapades of the seemingly unkillable Mike Banning any more interesting. Like the other films, the political subtext is just an excuse for the characters to get somewhat worked up, but unlike the previous entries, Angel Has Fallen is such a political softball that one wonders why the writers would bother in the first place. I didn’t agree with the politics in the other films in the franchise, but I almost resent this shift even more because it proves that there isn’t a single person outside of the creators and Butler who seem to care about any of this, and even they probably only care to the extent that they’re getting paid handsomely for such low budget productions. Angel Has Fallen is the kind of sequel that’s so dreadfully made that it can’t even get the franchise’s own worst impulses right, and that’s saying something.

Angel Has Fallen might hold some appeal to fans of the previous films (of which there are many, and I still for the life of me will never understand it), but mostly it’s geared towards the type of folks who get up at two in the morning, bathe in a tub of stale Old Milwaukee, and drown themselves in a cloud of Axe Body Spray before heading down to the gun range so they can pretend they’re popping some rounds into some sorry motherfucker. I don’t think people like that actually exist within those specific parameters, so anyone who deigns to buy a ticket to Angel Has Fallen needs to lower their expectations accordingly. Other than Nolte’s performance, some admittedly good stunt work, and any masochistic tendencies one might have, there’s absolutely no good reason to see Angel Has Fallen.

Angel Has Fallen opens in theatres everywhere on Friday, August 23, 2019.

Check out the trailer for Angel Has Fallen:

I’ll take this sort of mayhem over a comic-book movie any day of the week, weekly, thank you.