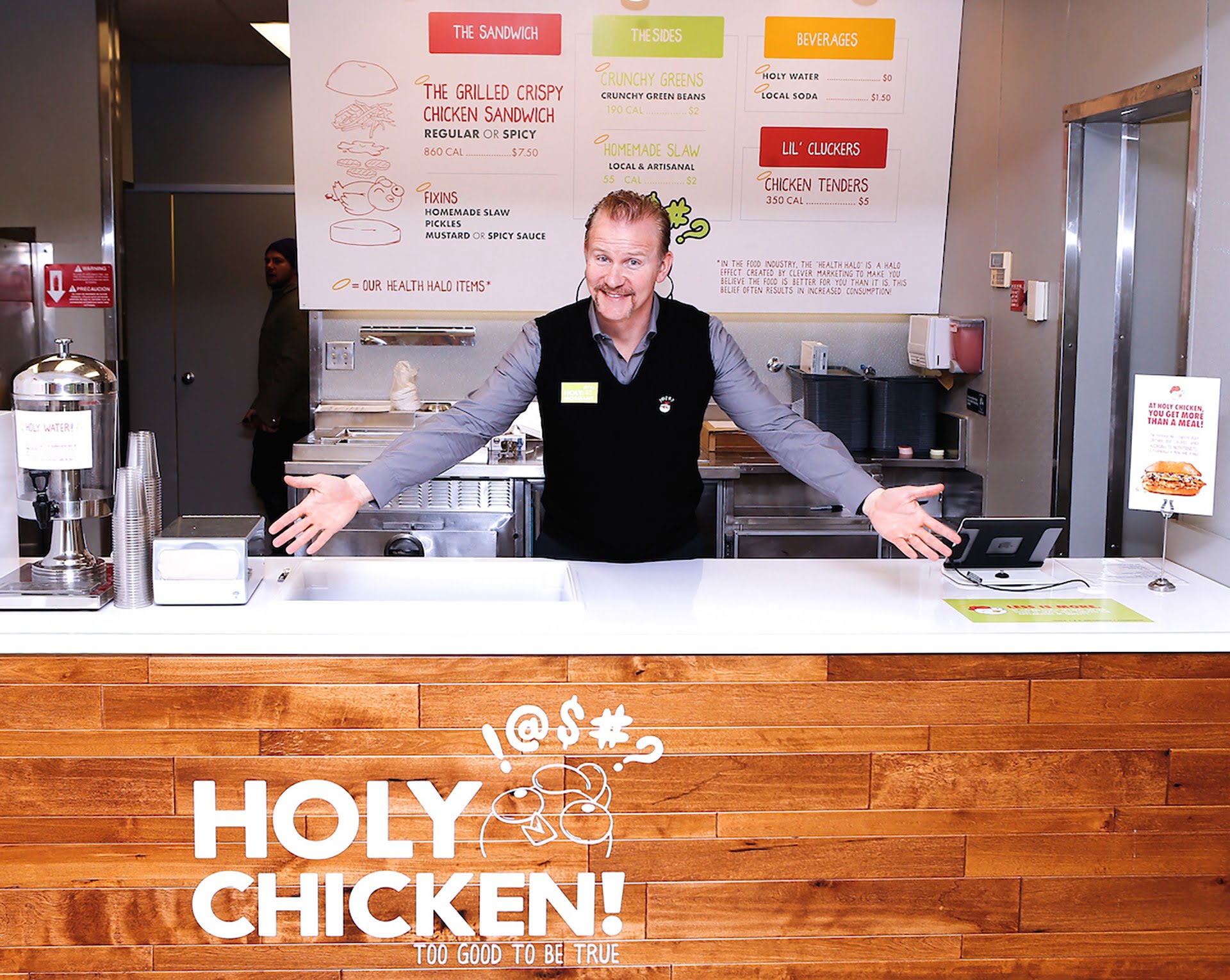 Once upon a time, documentarian Morgan Spurlock captured the attention of the health-conscious zeitgeist with his effectively entertaining (and Oscar nominated) bit of stunt journalism, Super Size Me, a movie where the svelte, mustachioed director put himself on a diet of nothing but McDonald’s for thirty days. Over a decade later – seeing that his work isn’t quite done and knowing that he can’t mount the same stunt twice in his lifetime for obvious reasons – Spurlock returns with Super Size Me 2: Holy Chicken, an exposé of big chicken and the various ways restaurant chains have created “health halos” around otherwise patently unhealthy products. Although Super Size Me 2: Holy Chicken (which is finally seeing release after a couple of years on the shelf following Spurlock’s admission of past sexual misconduct) finds the filmmaker setting his sights on a new, adjacent target, the approach feels stagnant. After working as a documentarian and journalist for over twenty years, Spurlock wants viewers to still see him as a jovial everyman with a few choice cards up his sleeve. I’m not lovin’ it, and while there are plenty of facts on display throughout Super Size Me 2: Holy Chicken that bear repeating, I’m not buyin’ it.

Chicken is arguably the healthiest meat available to carnivores and the most farmed animal on the planet, amounting to a $48 billion a year industry. 99% of all chicken sold and consumed in America is controlled by just five poultry suppliers, making it virtually impossible for an independent farmer without connections to the Tyson’s and Purdue’s of the world to get a leg up. It’s also framed by many big box and fast food retailers as a super-food of sorts, with fried chicken sandwiches holding almost as much of a stake in the marketplace as burgers. While plenty of places like McDonald’s and Wendy’s offer up healthier grilled versions of their chicken sandwiches and wraps, virtually no one wants to eat that flavourless and colourless garbage; they want the fried stuff.

Spurlock dips his toe into the coop after being approached by the marketing firm that does PR for Carl’s Jr. and Hardees, asking that he take part in a commercial underlining the strives the company has made towards sustainability and healthy eating. He laughs it off and gets the idea to open up his own blatantly transparent and honest fast food chicken joint at the site of a former Wendy’s in Westerville, Ohio, a suburb of Columbus, the “test market capital of America.” Spurlock also decides that he’s going to raise his own chickens to provide meat for his new endeavour.

Something about the approach and attitude of Super Size Me 2: Holy Chicken is off from the start. Anyone familiar with Spurlock’s gentle, stunt-heavy style of muckraking knows that he’s a smart man capable of uncovering hidden truths, even without the assistance of the corporations he’s trying to profile. So watching Spurlock calling up banks and giant poultry distributors trying to get chickens for his new operations marks an all time low for the filmmaker. By this point in his career, I find it hard to believe that viewers won’t be gullible enough to think that Spurlock is doing such things and expecting results given his notoriety as a documentarian or journalist. The viewer should know already that this isn’t going to work, but Spurlock plays the role of a shocked rube to the camera anyway. Super Size Me 2: Holy Chicken is packed to bursting with moments where Spurlock seems frustrated at the lack of help he’s getting in his quest to uncover more fast food secrets and the machinations of big chicken, but he had to expect this. 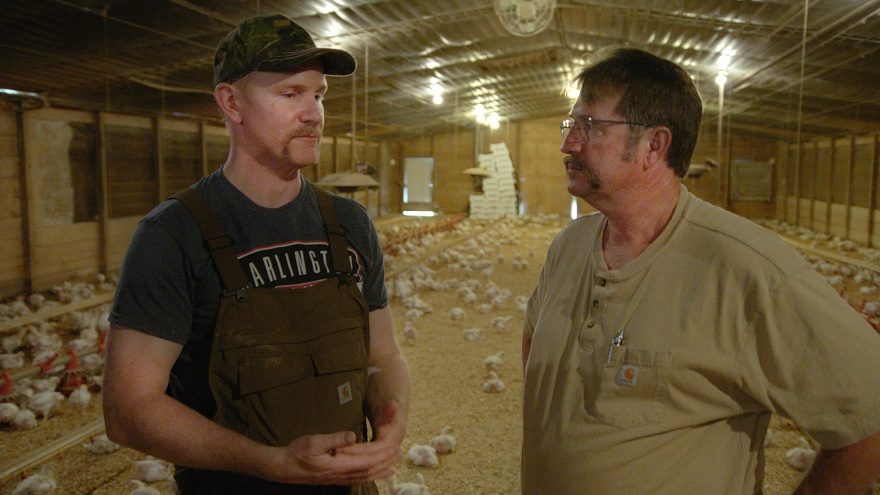 Gone is the everyman filmmaker seeking the truth, and its place is a smooth, savvy operator who cracked the formula for stunt journalism and is keen on running it into the ground. He’ll sit down with marketing gurus and doorstep some poor receptionist at the National Chicken Council (a powerful lobbying group for the poultry industry) and play nice; smiling and nodding along with everything they say, all the while barely being able to contain his giddiness at knowing that he’s several steps ahead of them and about to refute everything they’re espousing. It’s like watching Borat, except the character is played by Jimmy Fallon; someone who’s on the verge of cracking up every time something funny happens. What’s most disingenuous about Super Size Me 2: Holy Chicken is the filmmaker’s insistence that the audience buy into the same schtick a second time around, which is a shame when one considers the overall validity of his quest.

Despite Spurlock’s sometimes irritating desire to play the smartest man in the room once again, there are some things in Super Size Me 2: Holy Chicken that offer food for thought. There’s an interesting, brief explanation of the ways that decor and design can trick consumers into thinking they’re eating a healthy product. An examination of how chickens have been genetically engineered to grow at a rate so alarming that many of the animals have heart attacks before being processed is a frightening example of consumerism run amok. Spurlock talks about putting “health halos” around artery clogging fare, meaning you can say anything’s healthy if you throw some kale or artisanal slaw on top of it. A lot of viewers probably already know how pathetically easy it is to slap buzzwords like “free range,” “cage free,” “humanely raised,” “all natural,” or “hormone free” onto products to boost consumer consciousness and confidence, but there’s still plenty to examine in the ways marketing departments are constantly skewing the English language. (Fun fact that I learned: all poultry sold in the U.S. is probably already “hormone free” because it’s illegal to sell chickens that have been given hormones.)

But while most of Spurlock’s latest finds him travelling over the same ground as his biggest success, there is one section of Super Size Me 2: Holy Chicken that almost wills the entire film into existence. Through his own experiences raising 2,600 chickens on a farm in Crossville, Alabama, Spurlock connects with other independent poultry farmers who find themselves at the greedy mercy of corporations who want everyone to play by their rules. Independent farmers are frequently lowballed and mistreated, beholden to an archaic, unfair “tournament system” that pits everyone against each other for bigger profits. It’s less a tournament and more like an elaborate pyramid scheme, and should a farmer stand up for themselves or get out of line, they’ll get bumped back to the bottom of the pecking order.

Super Size Me 2: Holy Chicken doesn’t spend much time dwelling on this side of the story, but it’s the main reason some farmers have been so keen on making sure Spurlock’s latest sees the light of day, and with good reason. The treatment of farmers and their flocks might be the least sensational thing about Super Size Me 2: Holy Chicken, but it’s the part where Spurlock seems the most humane and engaged. Spurlock listens to these concerns, and he seems genuinely moved and impacted by what he uncovers. Unfortunately, by the time this element enters the story, it’s almost time for Spurlock’s restaurant to open up, and he immediately pivots back into his stunt-work.

It’s impossible not to figure out the punchline to Super Size Me 2: Holy Chicken right from the jump, and while Spurlock’s aims are frequently nobel, his insistence to constantly play to the rafters with his approach strikes as hypocritical at worst and ineffective at best. Had Super Size Me 2: Holy Chicken come out right after its predecessor, there might’ve been some weight to this. Instead, it’s a flavourless patty on a dried out bun that’s been sitting under a heat lamp for over a decade, offering only the most basic nutrition and sustenance.

Or, as one patron of Spurlock’s new restaurant puts it upon seeing the filmmaker’s “honest and transparent” choice of decor, “It’s bullshit, but it’s reverse bullshit.”

Super Size Me 2: Holy Chicken is now available on VOD.

Check out the trailer for Super Size Me 2: Holy Chicken: