Let’s get this admission out of the way first before I go on praising the entertainment value of Downton Abbey, the hotly anticipated big screen continuation of one of the biggest television series and pop culture phenomena of the 21st century.

I could never get into Downton Abbey when it was on the air.

Despite having a partner who absolutely adored the show while it was airing on PBS and numerous attempts to engage with creator Julian Fellowes’ epic tale of turn of the century nobility and their servants, the whole premise of Downton Abbey was inscrutable to me. Sure, there were good performances all around from a stacked cast of impeccable British actors and actresses who should be seen as nobility in their own respects; the series had a decadent, resplendent grandiosity, and there were some interesting things to be said within certain episodes that I watched about class differences, but on the whole I found it all rather cold and off-putting. It might be because I have a legendarily low tolerance for films, television shows, and books about rich people being rich, but I found Downton Abbey (the series) to be a perpetually somnambulant bore that was as impenetrable as the gates surrounding the Crawley estate. (Did they even have gates? I’m assuming they have gates. Seems like a place that would have gates.) Even when starting from the beginning and establishing a basic understanding of the characters and their interlocking, upstairs-downstairs relationships, I thought it was painfully akin to taking medicine and being told that I had to enjoy it. I didn’t like Dallas for similar reasons, but at least that American show was patently ridiculous.

And yet, despite my limited knowledge of the series somewhat inhibiting my enjoyment of screenwriter Fellowes and frequent episode director Michael Engler’s big screen outing for the Crawley’s, their kin, and their employees, I was sufficiently charmed by the feature length version of Downton Abbey. Make no mistake about it: Downton Abbey (the movie) isn’t much more than two episodes worth of plotting and character stitched together, and I would strongly advise against anyone unfamiliar with the show from trying to go into this world cold, but it has an overall savviness and willingness to entertain as broadly as possible without betraying the complexity that made the series alluring to so many viewers in the first place. I might not adore Downton Abbey or have a burning desire to suddenly give the series a fifth or sixth chance, but I certainly have a deep amount of respect and admiration for what Fellowes and Engler have accomplished here, and I was assuredly more entertained than I originally expected.

As a non-enthusiast, it’s hard for me to review something like Downton Abbey outside of the most basic terms, so I guess I’ll take the superhero movie approach to film criticism, and say as little as possible to avoid potential spoilers, since Downton fans are right up there with Marvel and Game of Thrones enthusiasts when it comes to such details spilling out before they see something. Basically, the overall plot of the film kicks in when the Crawleys receive word from Buckingham Palace that the king and queen will be coming to stay with the family on a swing through Yorkshire. The family accepts the invitation, but it opens up long festering wounds within the Crawleys, and the arrival of the royal family’s chosen set of servants, footment, butlers, and chefs leave the full time staff at the estate feeling frozen out and unwanted. 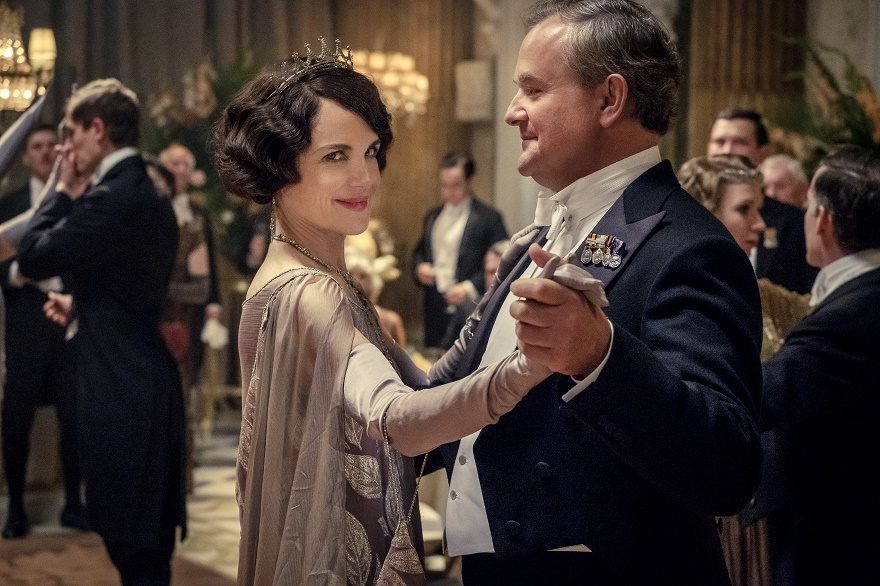 The basic backbone of the Downton Abbey movie is a classically entertaining conceit: rich people being outclassed by wealthier, more influential people. Within that there are high and low class power plays; some perpetrated by the delightfully crusty and proper dowager Violet (Maggie Smith), others by former head butler Carson (Jim Carter), who returns to the house to pinch hit during such a difficult time for the staff. There’s also a healthy dose of historical and social commentary to be found running concurrent to the culture clash that’s glimpsed through the eyes of Tom Branson (Allen Leech), an Irish sympathizer who finds his loyalties and loves perpetually tested by the impending arrival of the royals. The plot concocted by Fellowes is simplistic, yet purposeful, while still allowing plenty of room for character growth and multiple storylines that are capable of coexisting in harmony with the overall premise.

Downton Abbey looks as gorgeous as ever, thanks to a slightly higher budget than an average series episode, which allows for a bit more ornamentation and some more ambitious cinematography. It still looks like a television show, but it was always a good looking and visually accomplished series. But the main appeal of something like Downton Abbey is the joy of watching the band get back together, and Fellowes makes sure that any actor willing to return for the feature version of the show is given something substantial to do beyond simply parading them around for the sake of nostalgia that might not even be far enough removed to be referred to as nostalgia.

It spoils nothing to say that the overall plot of Downton Abbey wraps up tidily after about ninety minutes of its just north of two hour running time. From there, Fellowes and Engler settle into a more familiar groove designed to give the fans what they want, and reassure them that things are going to turn out (mostly) well for (most of) their favourite characters. It has multiple endings to wrap things up that would make Peter Jackson groan, but Fellowes also offers plenty of threads for future installments. The bulk of the extended climax takes place at a party, leaving Downton Abbey feeling like a movie that holds its own reception afterwards, albeit with a bit more substance than that implies. Fans, both casual and hardcore, will get a kick out of Downton Abbey on the big screen, even if it is nothing more than a couple of episodes’ worth of plot assembled into a single package. It certainly delivers what’s promised, and for what it’s worth, I would consider give another entry into this budding big screen franchise a chance, even if I don’t care about the series it’s based on in the slightest.

Check out the trailer for Downton Abbey: