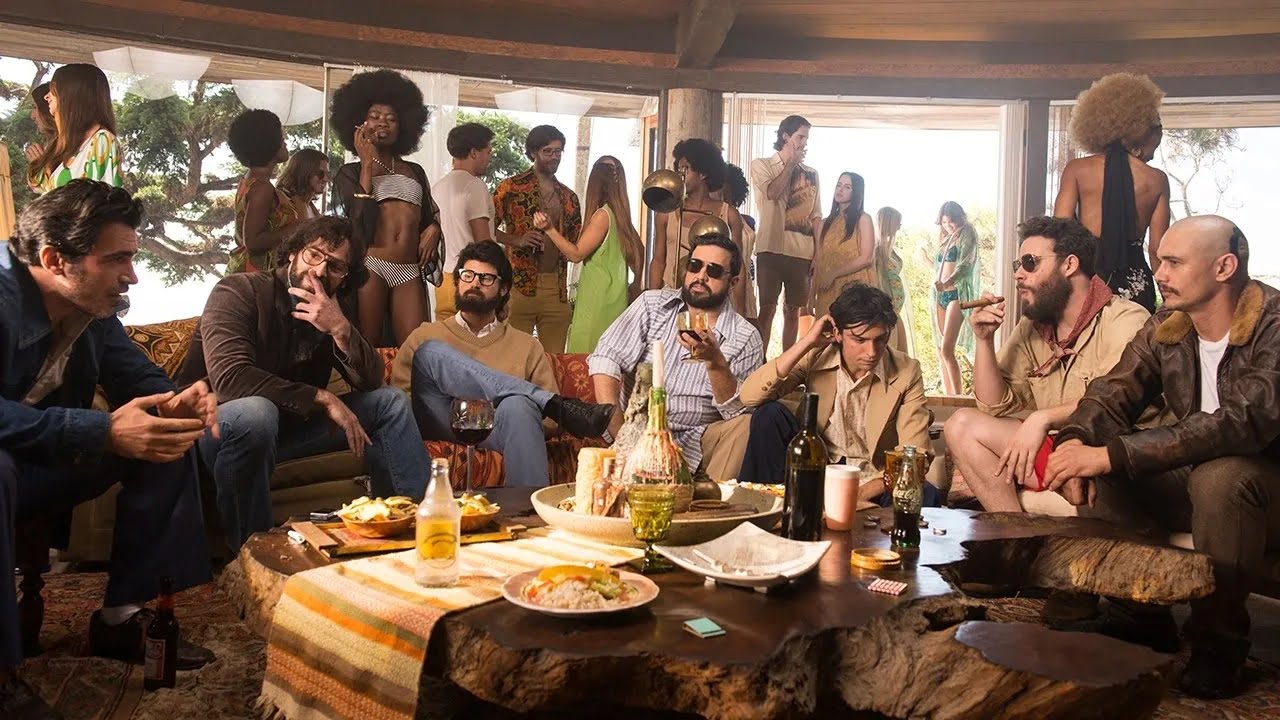 A misguided, aimless, and frequently irritating send-up of tinseltown egotism from the late 1960s until the early 1980s, director and star James Franco’s Zeroville feels like the work of a feverish cinema studies student on death’s door after overdosing on caffeine pills, everclear, Iggy and the Stooges records, and Martin Amis novels. It’s meant to play like an over-the-top and trippy satire and ode to the height of American auteur driven cinema, but thanks to Franco’s patent unwillingness to engage with his material on a meaningful level, it’s nothing more than one of the actor’s trademark performance arts stunts writ large. The only difference between Zeroville and a lot of his other student film piss takes is that he was somehow able to cajole a lot of his famous friends into coming along for the ride this time.

Franco stars as Ike Jerome – who prefers to be called Vikar – a young man who freaked out, dropped out of his Pennsylvania seminary, shaved his head, got an enormous tattoo of Montgomery Clift and Liz Taylor from A Place in the Sun on the back of his skull, and made his way to Hollywood in 1969 after seeing his first movie as an adult. A hyper-obsessive cinephile, Vikar has little experience in film, but wants to break into the business any way he can. He carries around a scale model of a building everywhere he goes, so he’s first hired making sets for a Man of La Mancha movie, before getting fired and shifted to the editorial department at Paramount, where he finds a mentor in Dotty (Jacki Weaver, the only performer here that rise above the material even slightly). The skills that he learns with Dotty leads to Vikar taking a meeting with a lecherous New York producer (Will Ferrell) who’s making an exploitation skin flick with an actress (Megan Fox) who has captured the young man’s eye and heart. Vikar gets heavy into punk rock, Jodorowsky, and Lynch, and starts experimenting, despite the fact that Zeroville becomes a more conventional movie just as the protagonist is growing increasingly unhinged.

The relationship between Fox’s single mother and struggling starlet and whatever the hell Franco is playing is the backbone of Zeroville, but let’s back up for a second. The film basically opens with Vikar getting arrested shortly after getting off the bus from Hollywood and getting interrogated by a pair of loudmouth cops (Danny McBride and Mike Starr, neither of them amusing in the slightest). The officers have the intense looking Vikar pegged for the murder of Sharon Tate. One might expect all of this to go somewhere, but once Vikar leaves the police station, none of this is ever brought up again, and Franco’s film keeps barrelling down the mediocre satire runway, right into scenes where the character is cozying up to a screenwriter (Seth Rogen, who I really hope was stoned for the entirety of his time here) and going to parties with the likes of Scorsese, Lucas, Spielberg, and Coppola. Vikar even goes to work on the set of Apocalypse Now, even though the film isn’t mentioned by name.

Zeroville actually completed principal photography all the way back in 2014, long before Franco made a successful, mainstream directorial effort with The Disaster Artist and prior to his temporary exile from A-list status following sexual misconduct allegations. It was slated for release in 2016, but the film’s distributor ended up going bankrupt, leaving Zeroville in limbo. When the film started, it was immediately apparent that I was watching a final product that wasn’t in any condition to please anyone other than the person who made it, but I could see why a distributor would want to take a chance on it. There are some big name stars, and it starts off in a way that could be seen as cashing in on Quentin Tarantino’s latest effort or the anniversary of Coppola’s most ambitious opus next to The Godfather trilogy. That wears off rather quickly once Zeroville shifts into becoming a forlorn punk rock love story, and I was again left wondering who other than James Franco would think releasing this onto an unsuspecting public would be a good idea.

The script by Ian Olds and Paul Felten – who previously worked on Franco’s ceaselessly shitty, amateurish, unwatchable, and equally ego driven “documentary” Francophrenia (Or Don’t Kill Me, I Know Where the Baby Is) – is a huge part of the problem, mostly because it’s clear that they’re adapting Steve Erikson’s novel for their director and star and no one else involved with the project. Zeroville isn’t a satire of Hollywood excess putting an end to one of the most formative eras in cinematic history, nor is it an impactful love story. It’s a giant shrine to James Franco and every talent that he wants to show off to the world.

Unlike his several Faulkner adaptations, which are relatively subdued affairs and bad in different, more reasonable ways, Zeroville finds Franco the filmmaker at his most petulant and obnoxious; a force of nature who wrestles everyone around him down to his level of infantilism. As hammy as Rogen and Farrell are trying to be in a bid to inject some life into this thing, Franco does nothing more than grit his teeth through his entire performance, framing Vikar as a naive psychopath instead of a transfixed human being. It’s a performance that both tries to hard and is still tied to a gimmick that isn’t working at all, but it won’t be abandoned because the star is also the director. It’s watching a captain going down with his ship while doing a terrible impersonation of a method actor, only nowhere as entertaining as that sounds.

The direction is from the perspective of someone without a shred of humility, which is a baffling choice when one considers that the main character is essentially the humblest person in a sea full of sharks and liars. Franco loves his mood lighting, montages, archival footage from other films, literary allusions, and needless crane shots. Franco is laughably proud of that tattoo on the back of his big, bald head, giving it a close-up every chance he gets. The editing is incompetent and virtually incomprehensible, but as Vikar learns from his mentor, continuity means nothing, and it takes nearly the entire movie to realize that Zeroville takes place over the course of eleven years and not a single anachronistic one.

As the film drones on, it becomes apparent that there was a shred of a good idea in Zeroville. The outline of an interesting treatise on the fine line between art and trash (or punk rock and polished art in the case of Franco’s character) and cinema as a both healing and destructive force can be seen. It’s just a shame that Franco – and by extension all of his on screen enablers and “yes people” – are doing everything humanly possible to sabotage it. Then again, that might be the joke. I can almost hear Franco’s voice in the back of my head saying, “It’s punk rock, man.” No. It’s shit, man.

Check out the trailer for Zeroville: