Bitter, misanthropic, and almost too brazenly idiotic to be as offensive and button pushing as the filmmakers probably intended, the stalker thriller The Fanatic has quckly gained infamy for becoming the lowest point in the career of leading man John Travolta, making barely over $3,000 on its opening day at the box office in the U.S. during a cursory pre-VOD theatrical run. Starring as a mentally ill and disabled superfan keen on securing some one-on-one face time with his favourite action star, Travolta’s performance is as assuredly embarrassing as one might expect from material this bizarre and off-putting – courtesy of director, co-writer, and Limp Bizkit frontman Fred Durst – but I’m not sold on the notion that The Fanatic is the worst thing the actor has ever done. Coming hot on the heels of staggeringly incomptetent and borderline incomplete movies like Speed Kills and Gotti, The Fanatic looks rather assured. I’d also go out on a limb and say that it’s not worse than Battlefield Earth, Old Dogs, Savages, Moment by Moment, or Look Who’s Talking Now, even when saddled with repugnant subject matter that’s as subtly handled as someone using a speeding freight train to hammer a nail. What does it say when something as dreadful as The Fanatic turns out to be only the eighth worst movie of Travolta’s perpetually tarnished and only occasionally elevated career? It says that this talented actor officially needs to burn his entire career to the ground and start from scratch yet again.

Moose (Travolta) has an unhealthy obsession with movies, and with B-movie star Hunter Dunbar (Devon Sawa, who looks like he was picked because Anthony Michael Hall was unavailable) in particular. Moose – whose boundless antsiness, unconfident speech patterns, sudden mood swings, sheepish demeanour, schlubby fashion sense, and unfortunate half-bowl-half-mullet haircut suggest someone on the autism spectrum (even though the film never specifically says so) – will do anything to meet his idol, including crashing parties with the aid of his only true friend, a sympathetic paparazzo (Ana Golja, who also narrates, for no good reason). He’ll buy rare memorabilia from Hunter’s films in hopes the actor will sign it and they’ll become fast friends. The first encounter between the pushy Moose and Hunter goes terribly. Their second meeting, which revolves around Moose trying to hand deliver a fan letter to Hunter, goes even worse, with the actor telling his biggest admirer to get off his property and stay away from his kid or face physical and legal consequences. Moose doesn’t let up, however, growing angrier at Hunter’s constant attempts to rebuff his adoration, leading the fan to go to violent extremes in a bid to be noticed and respected.

There’s only one emotion on Durst’s mind throughout The Fanatic: pure, unfiltered hatred for everyone and everything, but it’s a film that wants to have its cake and eat it, too. It’s expressly made to tell haters to fuck off, but it’s also made by someone who shits on everything around them. There isn’t a single character in The Fanatic that has any likable or even identifiably human characteristics. Everyone in Durst’s Los Angeles – which is deemed “the city of bullshitters” in The Fanatic’s laughably on the nose narration, which follows a title card quote not from a famous thinker, but from the film’s fictional actor – is an irredeemable vulture. The Fanatic takes place in a world where everyone’s a bloodsucker, nobody gives, and there isn’t a single person worth giving a shit about, so why even bother watching them in the first place? Despite Durst and co-writer Dave Mekerman taking a couple of facile, laughably thin stabs at creating empathy for both Moose and Hunter (by giving the former a brief flashback to hint at a troubled childhood and giving the latter a kid and calling it a day), The Fanatic is a movie about cruel people acting terribly to one another, and while some films like The King of Comedy can pull off something that misanthropic to brilliant degrees, Durst’s film can’t make any of this thoughtful, suspenseful, or even remotely engaging to watch.

As Moose grows increasingly unhinged, it becomes obvious that Durst has no idea how thrillers should be paced or assembled. Scenes crash into each other for the sake of getting things over with as quickly as possible with almost no regard for the logic behind any of it. You know a movie is bad when a character says they’re about to do something, and then the next edit leads to that character in the same place they were before, saying that they’ve already done what was suggested in the previous scene without the viewer seeing what could’ve happened in between. The Fanatic is filled with such moments, and it isn’t aided by the fact that it’s impossible to believe that Dunbar wouldn’t call the police immediately to get a restraining order against his stalker after their third contentious run-in. (This says nothing about the film’s final act reveal, which is built around an act committed by Moose that’s impossible to forget, but Durst laughably thinks he’s pulling a fast one on the audience.) 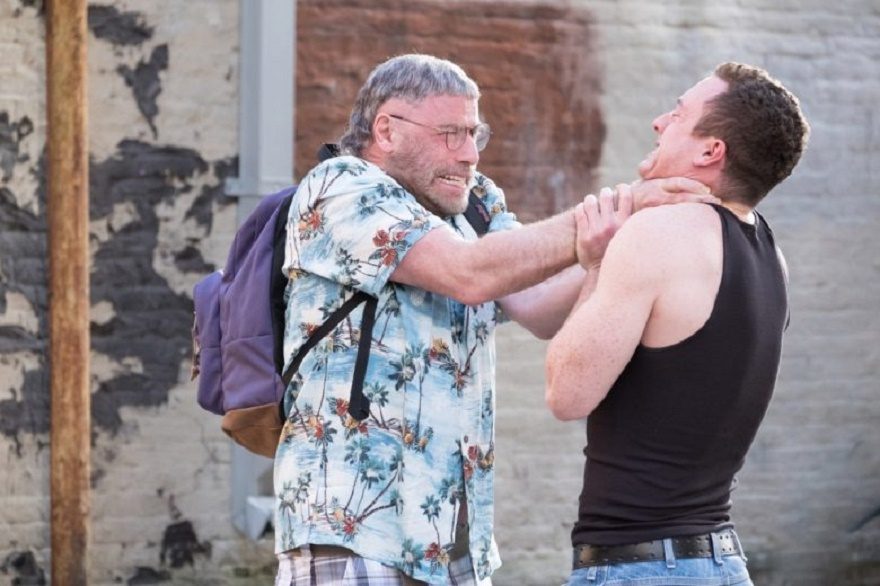 There’s only one sequence in The Fanatic that’s halfway decent, and it comes when Moose breaks into Hunter’s house while the actor and his son are away for the day. It starts off goofily enough, with Moose bouncing around his idol’s house like a kid who got the keys to the candy store, but eventually Durst and Travolta settle into a suitably creepy groove. It’s the only sequence in The Fanatic that seems to take the price of celebrity and fan entitlement seriously. There are so many reports of similar incidents happening to various celebrities that watching Moose hanging out in Hunter’s closet and using his toothbrush is genuinely creepy and believable. If that one scene existed as a short film, The Fanatic might’ve been tolerable. Instead, Durst and Travolta can only be commended for continually committing to only the worst filmmaking and acting decisions possible, doubling down on their dumbest impulses at every turn. Durst really wants to stick it to fanboys, the disabled, and “celebutards” (a term that the writers employ frequently) with full force, but The Fanatic has all the depth and social commentary of a truck decal featuring Calvin pissing on the script for this movie.

The main reason to either see or avoid The Fanatic is Travolta’s eccentric, tic laden performance, which never settles upon a single depiction of autism or mental illness and just decides to do everything that’s ever been done with such a character at the same time. He walks with a shuffle and humps his motor scooter like that will somehow make it go faster, looking less like an actor playing a complex character and more like a schoolyard bully mocking someone with a shit-eating grin on his face. Moose’s voice squeaks and cracks when he gets flustered, and he has a savant-like knowledge of genre cinema that he’ll spout off gleefully (even if his taste in movies, which extends to a Texas Chainsaw 3D poster in his living room, is endlessly shitty). Travolta is allowed to show some degree of compassion for Moose in one of the film’s emotionally charged final scenes, but that doesn’t suddenly redeem everything that comes before it. On the whole, Travolta’s performance in The Fanatic plays like a mash-up between Bobcat Goldthwait in Scrooged, William H. Macy in Magnolia, and John C. Reilly as Dr. Steve Brule. It’s too goofy to be taken seriously and too scattershot and offensive to be funny. It’s a woefully misguided, over-the-top, fence swinging performance delivered packed with equal parts actorly indulgence and ignorance. What’s worse is that it’s not even the worst performance in the film, with that distinction belonging to Jacob Grodnik as a thoroughly obnoxious Hollywood Boulevard performance artist and pickpocket who perpetually bullies Moose while the poor guy trying to make a living posing for photos with tourists as a hilariously unconvincing British bobby. (I almost forgot to mention that The Fanatic includes a scene where Moose tries to get into character as an old school English copper, and it’s one of the worst/best/most unfathomable things I’ve ever seen.)

With a rewrite from the ground up and completely different principals involved, I could see The Fanatic working either as a dark comedy or an intense thriller, and while it wouldn’t be breaking any new ground, it would be far more satisfying than the abomination Durst has delivered. And yet, Durst (who makes sure to include a scene where Hunter teaches his young son about how great of a band Limp Bizkit is) isn’t the worst filmmaker Travolta has worked with lately. The general offensiveness, empty misanthropy, and easy targets of The Fanatic might suggest a career killer for Travolta (and possibly for Durst as a filmmaker), but that would suggest that the actor’s career hadn’t already been on life support for over a decade now. The Fanatic, despite all of the actor’s efforts to hit this one over the freeway and into the ocean, is more forgettable than the flops that immediately came before it in Travolta’s career, which might be for the better. It pains me to say that The Fanatic is a step up for Travolta as of late, and that should double as both the faintest of praise and tell you all you need to know about how god awful this thing truly is.

The Fanatic is now available of VOD.

Check out the trailer for The Fanatic: