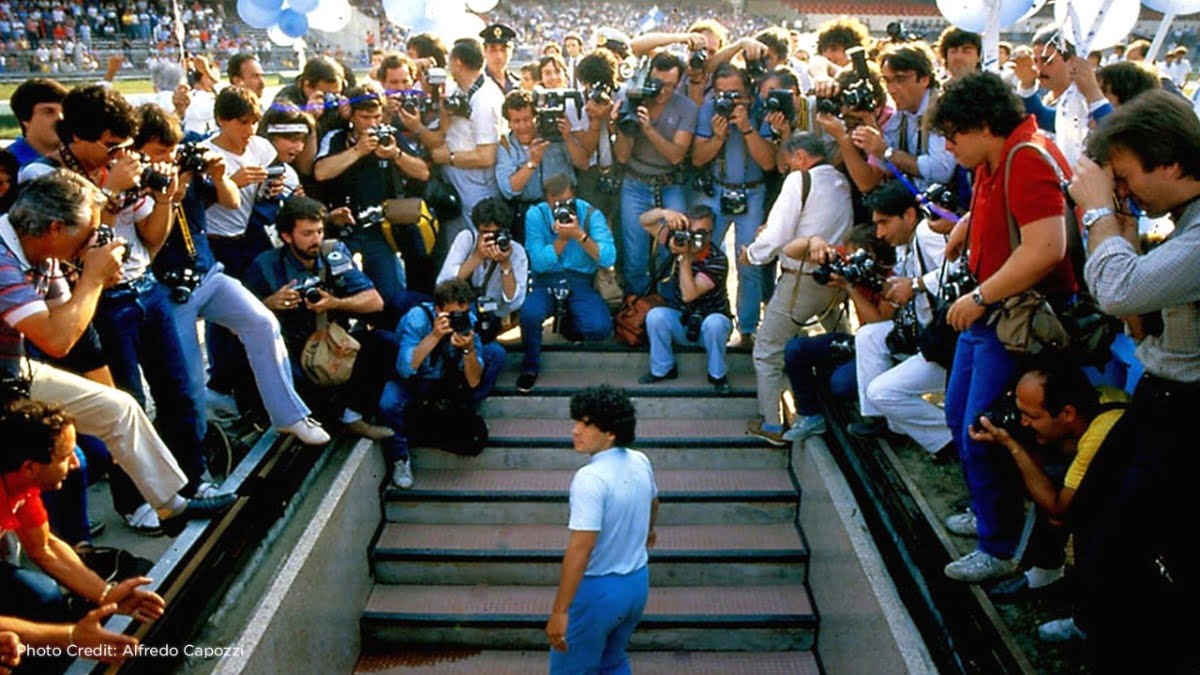 With his latest documentary, Diego Maradona, filmmaker Asif Kapadia does for deified and vilified footballer what he previously did for Formula One driver Ayrton Senna and pop music superstar Amy Winehouse, with equally eye opening, insightful, and empathetic results. While Kapadia is working with a subject who’s still alive to see such a documentary made about him, the story of Diego Maradona has only slightly less heartbreak and tragedy than the director’s previous subjects, but there’s certainly more controversy to be found here, both on and off the pitch.

Diego Maradona takes the same stylistic approach as Senna and Amy, with Kapadia building a documentary entirely out of hundred of hours of archival footage – most of which has never been seen publicly before – to tell a story of a renowned celebrity whose dreams quickly turned sour thanks to a combination of external forces, ego, and personal demons. Only this time, Diego Maradona finds Kapadia focusing most intently on a single period in the Argentine athlete’s career and life.

Diego Maradona swiftly delivers a bunch of backstory regarding its subject’s early career in music video fashion during its opening scene, cutting all of the contextual material together with footage of a motorcade speeding through Italian streets en route to a stadium in Naples. Following a couple of contentious and unfulfilling seasons spent playing in Barcelona, Maradona – who by this point had already been dubbed the best soccer player since Pelé – was sold off to the perpetually struggling S.S.C. Napoli in the mid-1980s. It was a curious move for the world’s best footballer, as his new Italian club played a different style of soccer and was a terrible team in a highly competitive league. Napoli were the whipping boys of the league, never winning a championship and constantly the butt of racist jokes from other Italian soccer fans. The rebuilding of Napoli into a respectable organization fell entirely on the shoulders of Maradona, who easily sympathized and identified with the economic plight of his new fans thanks to his hardscrabble childhood in Argentina. After a so-so first season, Maradona delivered on his promise to bring the club to greatness, elevating the social status of an entire culture and community in the process and propelling him to even greater heights of stardom. But as the old chestnut goes, mo’ money means mo’ problems.

Kapadia occasionally shifts gears and doubles back to provide some necessary explanations about everything that came before Maradona’s mid-80s to early 90s heyday in Italy, but it’s hard to argue against the director’s choice to zone in on this particular period in his subject’s history. All anyone would ever want to know about the pressures faced by the star of any professional sports team can be glimpsed simply by letting the facts of Maradona’s life play out without much embellishment or unnecessary enhancement. Like Senna and Amy before it, all new interviews with a variety of family members, journalists, former players, exes, trainers, historians, and Maradona himself are heard over the archival footage on display. Once again, Kapadia proves to be a master at assembling this style of documentary, with the director and his editorial team (headed up by frequent collaborator Chris King) always able to find images that enhance the story being told through the interviews. Although one might be moved by performances or feats of athletic prowess, Kapadia has always been particularly adept at showing how those moments only tell half a story, and the filmmaker constantly finds new ways to recontextualize iconic images. 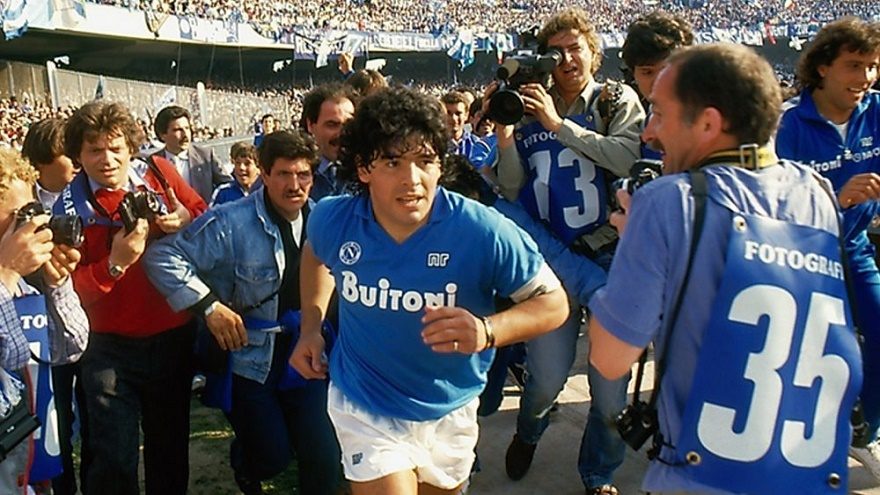 Nothing feels lost through Kapadia’s focusing on one specific point in Maradona’s history because every event that transpired during this time in the footballer’s life paints an interconnected picture of who he was as a person. While it doesn’t have much to do with his success in Italy, this period can’t be discussed without taking a deep dive into the infamous “hand of God” goal that happened during the 1986 World Cup match between Argentina and England; a moment that holds a lot of meaning for the athletic and political histories of both countries and came during Maradona’s inarguably career defining game. But the covering of such a tangential, contentious subject builds a necessary bridge to the 1990 World Cup, where Argentina would meet Italy in the semi-finals, and an increasingly burnt-out and broken-down Maradona would see his life changed forever.

Much like Amy and Senna, Diego Maradona is a documentary about someone who was used, abused, and tossed aside by those who could profit from their success, and much like Kapadia’s most notable recent efforts, the subject is also in many ways the architect of their own sad demise. Maradona, even by his own admission, wasn’t a saint. He was a cheat both on and off the field, with Maradona acknowledging that his most memorable goal was an illegal one and the film’s interview subjects never backing down when talking about how he fathered a child with a mistress that he denied for decades. Maradona admits that he had contacts with members of the notorious Giuliana crime family, mostly because they supplied him with gold Rolex watches and the heavy amounts of cocaine he needed to get through the day. He started partying after the final whistle of a match on Sunday and didn’t stop until Wednesday morning, neglecting all parental duties he had with his actual wife in the process. He grew unhappy playing in Italy thanks to a nasty case of sciatica and other nagging injuries, but the Napoli club president refused to let Maradona go, leading to more drug usage and unhappiness. Many in the media never liked him, but once Maradona grew more outspoken about his unhappiness, the entire populace turned on him, comparing him unfavourably to the likes of Mussolini and Satan himself. Eventually, every “open secret” revolving around Maradona would come back to bite him in the ass, and his career would never recover.

It’s not uncommon for fans, the media, teammates, and investors to turn a blind eye to problems and scandals as long as things are going well and the wins keep on coming, and the story of Diego Maradona is a perfect example of how unreasonable expectations can become explosive. Maradona, who often refers to himself in the third person during interviews (an extension of his belief that Diego, the poor black kid from the slums, and Maradona, the superstar, are two different people), certainly had an ego, but just like with Amy and Senna, Kapadia looks at how enabling destructive behaviours causes everyone within a celebrity’s orbit to lose all of their investment the moment things go off the rails. Diego Maradona takes that common thread further by using its subject to look at the fervent nationalism and pride that goes hand in hand with the most popular sport in the world. One could argue that Senna and Winehouse had less riding on their success than Maradona did, and this his fall from grace – while less lethal – was swifter and more devastating for a lot of people.

Diego Maradona never lets its subject off the hook for all of the bad things he unquestionably did, but it puts the moments that have been blown out of proportion thanks to nationalism and fan driven fervor into a proper context. It’s a rich and complicated story to tell, and one that could only be told after a lengthy cooling off period and through a subject who’s had time to reflect on the overwhelming amount of stress he went through. Maradona might still be the greatest played to ever don the cleats, but he certainly wasn’t the clear cut saint or demon many made him out to be at various points in his career. Although Kapadia hones in on a specific ten year time span, Diego Maradona feels overwhelmingly comprehensive. It’s a cautionary tale that will endure as long as sports continue to exist.

Diego Maradona opens at The Hot Docs Ted Rogers Cinema on Friday, September 27, 2019. It also premieres on HBO on Tuesday, October 1 at 9:00 pm (EST) and will be available to stream on Crave in Canada the same day.

Check out the trailer for Diego Maradona: