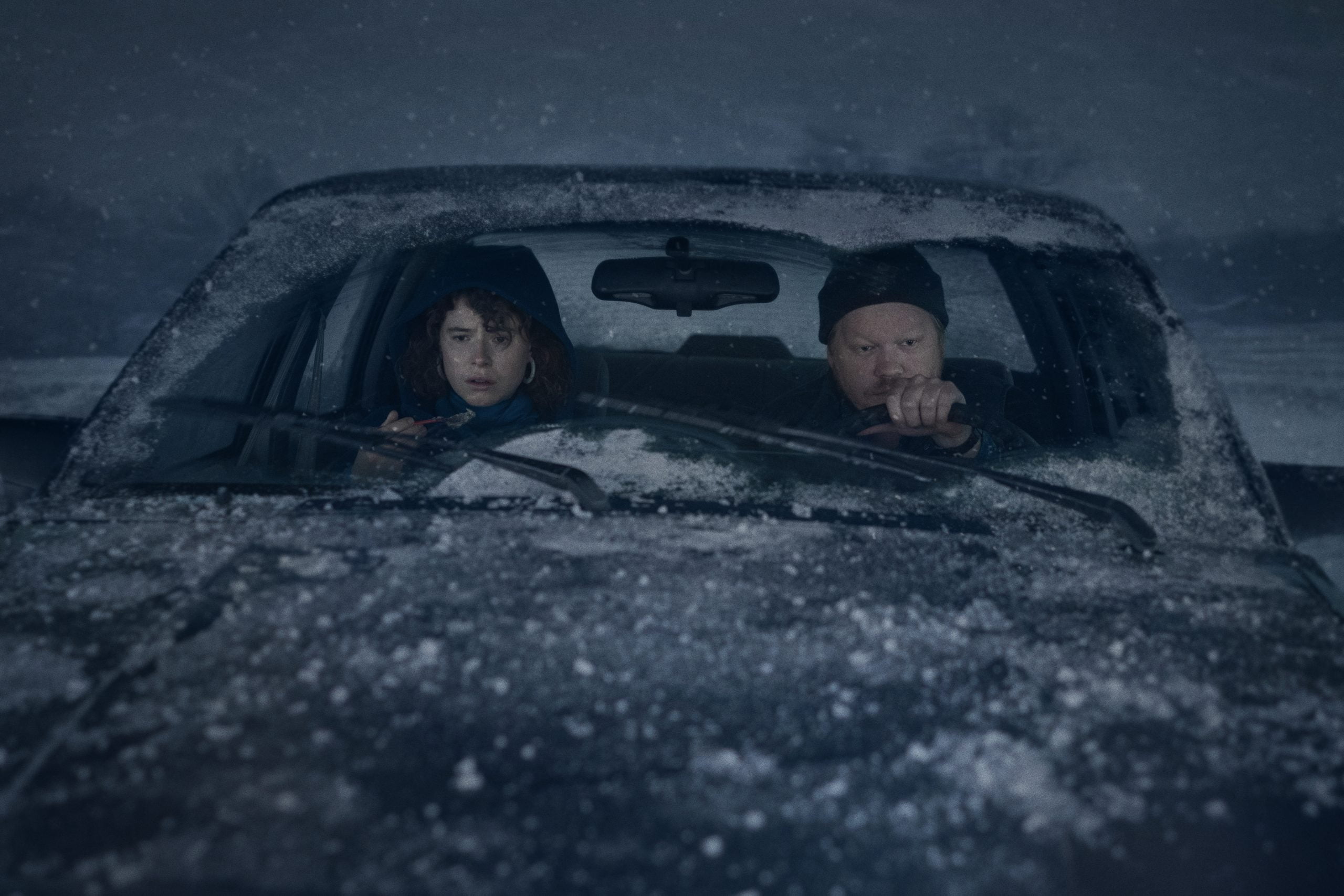 A movie can be many different things depending on the viewer, and opinions can often go beyond mere like and dislike. People, like movies, can be complicated, complex, and sometimes they leave a distinct impression without making a lick of sense or through sheer force of alienation. What one person thinks is a well bodied and strong cup of black coffee could be seen by others as neverending bitterness akin to drinking a blended concoction of boiling water and cigarette butts. This especially is true about films that attempt to combine huge emotional responses with avant garde artfulness, and specifically when it comes to the latest from director and screenwriting auteur Charlie Kaufman, I’m Thinking of Ending Things.

For me, I’m Thinking of Ending Things is 50% great cup of coffee and 50% garbage juice, with the better half just barely coming out ahead as being more memorable. A pure and uncut packaging of the same themes of love, loneliness, and social anxiety that Kaufman has built his entire career upon to this point, I’m Thinking of Ending Things is intelligent, but deliberately off-putting and resoundingly inaccessible to mass audiences. At various turns it’s intriguingly vague, and at others Kaufman’s work becomes didactic and maddeningly hyper-specific. It’s a work of savage rage, pitiable sadness, and a healthy dose of egomania. It’s singular, unique, hypnotic, and thoroughly annoying; the type of film that’s easier to admire for its uncompromised vision than it is to actually like or enjoy. It’s made with boundless energy and creativity, but it will leave almost everyone who views it – positively or negatively – drained and exhausted. There are plenty of scenes worth pondering and analyzing that will stick with me for quite a long time, and yet, I can’t say I ever have a desire to sit through Kaufman’s latest again anytime soon.

Based (mostly) on the celebrated debut novel from Canadian writer Iain Reid of the same name, I’m Thinking of Ending Things centres around the doomed relationship between Lucy (Jessie Buckle) and Jake (Jesse Plemons). They’ve been together for several weeks, and Jake is bringing Lucy to meet his parents at their secluded farmhouse. During their lengthy drive on a snowy day through middle America, Lucy and Jake struggle to maintain meaningful conversations, with the young woman’s inner monologue constantly explaining that she thinks their relationship will be over not long after the visit. When Lucy and Jake arrive at their final destination, something isn’t quite right with mom (Toni Collette), dad (David Thewlis), the family dog, the house, the farm, and really everything in general.

Don’t hope for too much of an explanation as to what might be happening in I’m Thinking of Ending Things. This isn’t that type of movie. Nor is it a work of avant garde cinema that allows viewers to draw their own conclusions. From scene to scene, the character motivations and traits, level of tension, and sense of humour keep changing to fit Kaufman’s whims, leaving I’m Thinking of Ending Things virtually indecipherable as a whole, matched by a consistent, deliberately chilly, muted, and unnerving visual style that’s only broken during the unexpected climax (although, one could argue that everything here is unexpected).

Much like his script for Eternal Sunshine of the Spotless Mind and his directorial efforts Anomalisa and Synecdoche, New York before it, I’m Thinking of Ending Things finds Kaufman trying and failing to find meaning in personal relationships. It’s nothing new for Kaufman, and while the filmmaker’s constant “nobody loves or understands me” drum beating has always felt tiresome, self-serving, and bland to me, there’s something to be said about how I’m Thinking of Ending Things finds the writer-director unmooring these themes and appropriating them into an outright untethered freak-out.

There’s no linear narrative to speak of in I’m Thinking of Ending Things outside of Lucy and Jake heading to and from his parents’ home, but instead of approaching the dreamlike eeriness of Stanley Kubrick or David Lynch at their weirdest, Kaufman’s purposefully frigid and insufferable latest feels less like a cohesive motion picture and more akin to a series of rigorous, calculated, and repetitive sketches that are variations on the same theme. Characters are constantly changing in age, temperament, accents, and chosen fields of study throughout the film, and the only reason for doing so is to help facilitate another rant from Kaufman on any number of topics that he feels like talking about. All of these discussions tie into the jaggedly woven fabric of the movie and Kaufman’s pronounced sense of alienation, but these evolving and increasingly strange bits and pieces only work from moment to moment. The lengthy opening sequence documenting a seemingly never ending and awkward road trip gets things off to a promising start, and the first sit down meeting between the parents and slowly estranging lovers reinforces that Kaufman might be onto something masterful here.

But once things get going on the farm,  Kaufman’s film devolves instead of growing more interesting. Instead of following along the lines of an impending and potentially messy break-up, I’m Thinking of Ending Things becomes an outright mess, collapsing in on itself like a black hole and appealing only to the most die-hard defenders of its creator that will be more than happy to be pulled into the darkness. I’m Thinking of Ending Things is billed as a thriller, but there’s nothing particularly “thrilling” about it unless one enjoys being dragged kicking and screaming into a complete stranger’s broken-hearted anxiety attack, the nadir of which comes when Lucy launches into an unprovoked and painfully long takedown of John Cassavetes’ A Woman Under the Influence that reduces Jake to tears of rage. At this point, I’m Thinking of Ending Things becomes less like a movie and more like a series of operatic rants one might find at a comedy club on open mic night when the people on stage are too drunk to perform. 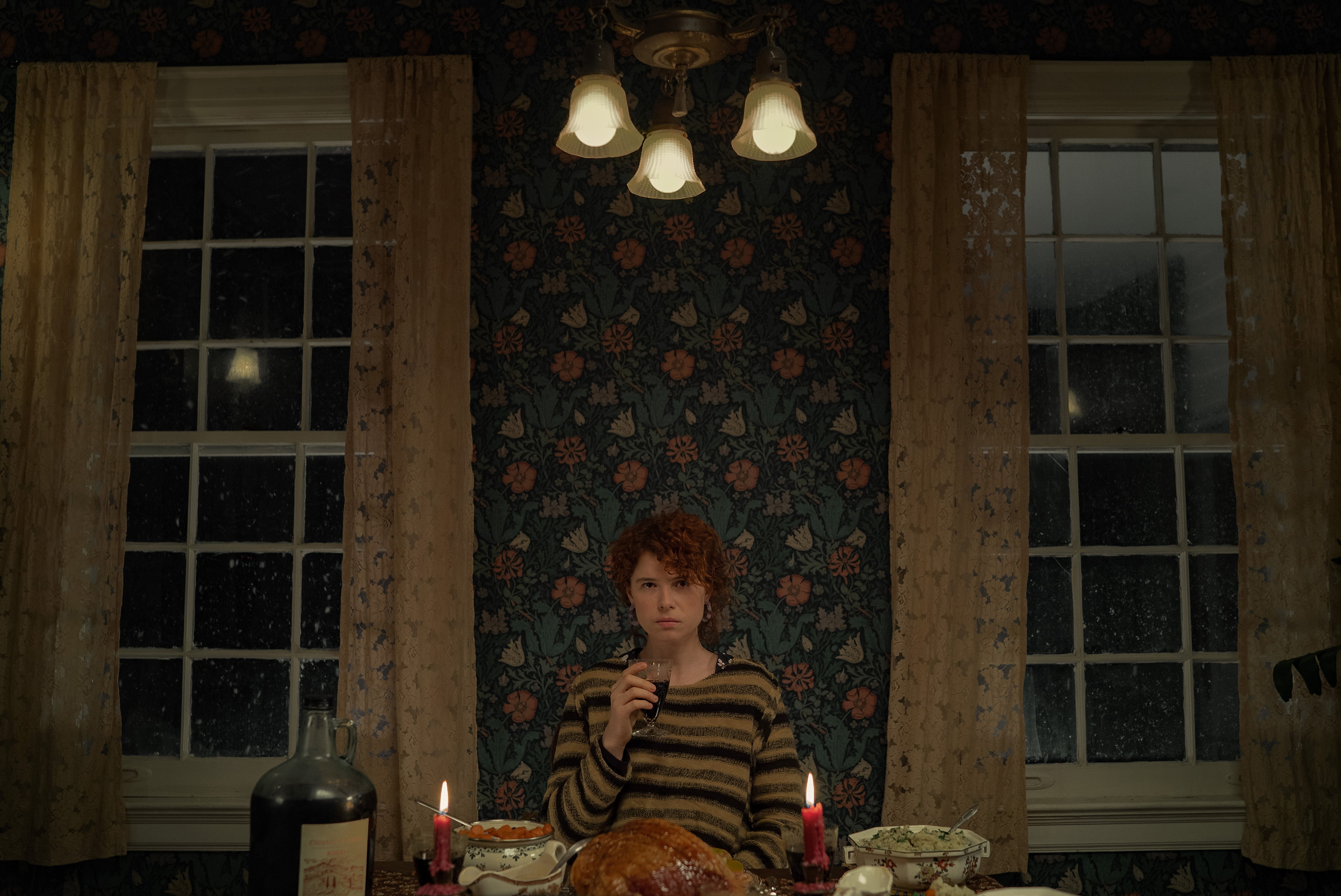 That’s certainly bracing to watch, but not necessarily insightful, entertaining, or always on point. Whereas Reid’s book allows readers a clearer path to deciphering what might be happening (and is brilliantly weird in its own ways), Kaufman’s version of the same story is constantly pushing the viewer away rather than inviting them to greater thought. It’s a cinematic work (and, in many ways, a big screen equivalent of a greatest hits album) made by an auteur more caught up in minutiae and nerdiness than the emotions driving the story. It’s what makes Kaufman such an endearing figure to his legions of admirers and worshipers, but also what leaves some people (myself included) cold and vexed. No one in I’m Thinking of Ending Things sounds like a character from a book or a film or anything like a flesh and blood human being. Everyone in the film sounds like voice from the back of Kaufman’s mind, which is both entirely the point here and still not very moving or thoughtful in practice. The biggest appeal here would be for people who wouldn’t mind being stuck in an elevator with Kaufman for 135 minutes.

The cast knows precisely the kind of head trip they signed up for, with all four leads turning in the type of work that elevates Kaufman’s material beyond the page. But if not for their efforts, I’m Thinking of Ending Things would smack of undiluted ego. Although I’m Thinking of Ending Things boasts the first leading female character in a Kaufman film, there’s no mistaking Lucy or Buckley’s portrayal as anything other than a clever aping of the director’s own insecurities. Instead of feeling like one of the stranger works of playwright Sam Shepard (with many obvious parallels throughout), I’m Thinking of Ending Things comes across like it was made by Quentin Tarantino trying to reason through a bout of temporary amnesia. It’s scattershot, relentlessly chatty, and excessively referential, but at no point is Lucy telling the people around her anything meaningful or open to interpretation.

For a film with no discernable plot or tone beyond blanket menace and smart-assedness, I’m Thinking of Ending Things is distressingly literal, with Kaufman’s script flat out telling the viewer what to think instead of leaving interpretation of each progressively anxious dialogue up to the viewer. It still makes little sense on the whole, but Kaufman goes out of his way to manipulate the audience into listening to his take on any number of topics rather than leaving anything to chance. Kaufman has always been a masterful and admittedly underrated emotional manipulator, but here the results are a mixed bag. Sometimes these moments work, and sometimes they’re interminable.

I realize this is a strange, confusing, and vague review, but Kaufman’s latest is almost impossible to talk about in a single sitting, which is admirable if one ends up enjoying the movie and painful to those who will obviously balk at something this deliberately obtuse. I don’t want to spoil it for anyone, and I’m willing to talk about it in the future because there’s a lot of interest worth parsing. But I also like the film more in practice and gutsiness than I do as an actual cinematic work. Half of this is the best thing I’ve seen all year, and half is the dullest and most aggrandizing. I’m happy that it exists, and perplexed that it isn’t a better film. It will be loved and hated with equal measure, and I will understand where each side of those opinions will be coming from. The edge for me between reviewing this positively and negatively comes down to one inarguable fact: it’s an impossible work to forget.