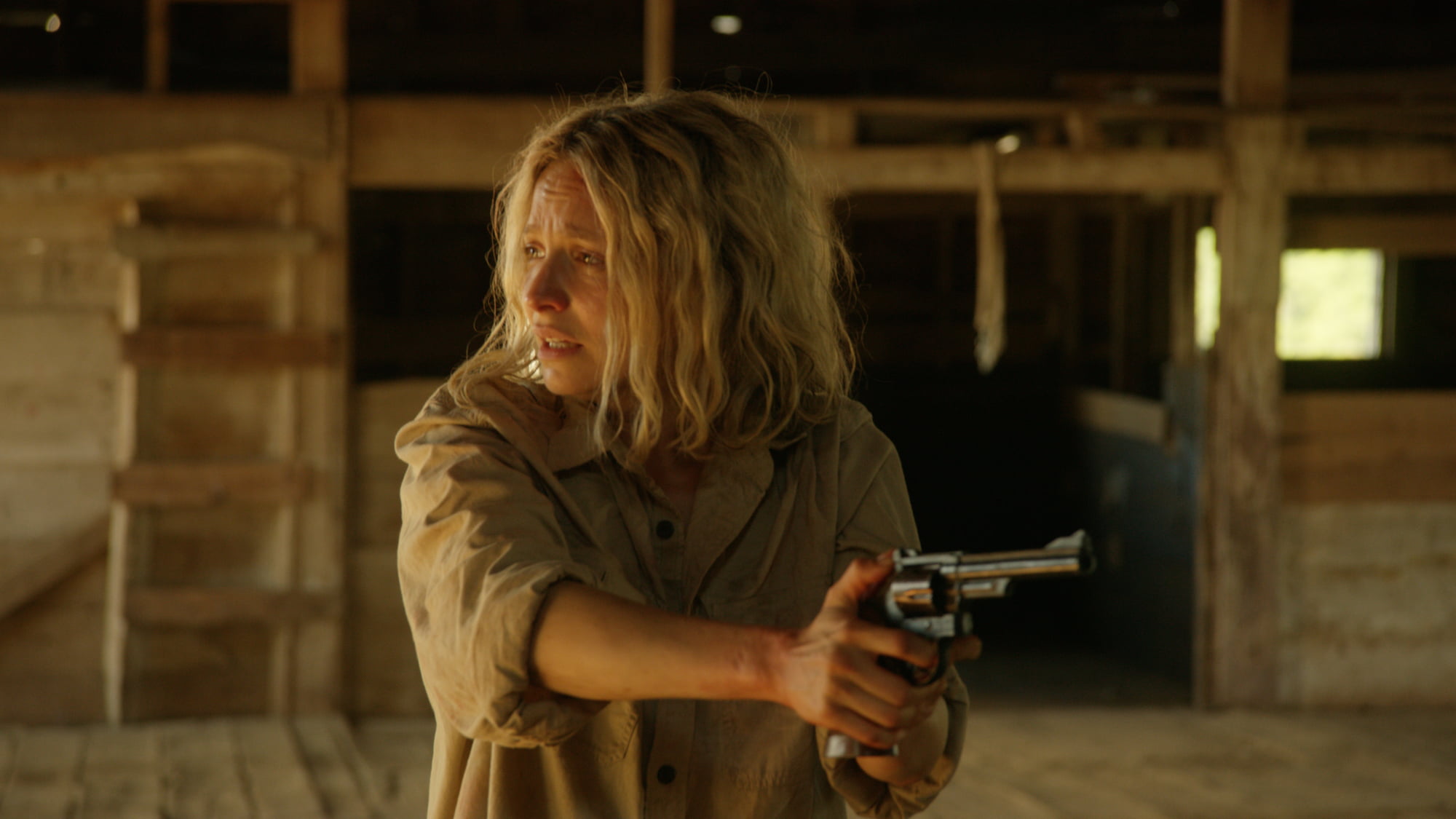 Forgettable and largely amateurish, the backwoods chiller Ravage has very little going for it. Grim for the sake of being grim and devoid of anything that could be considered scary, suspenseful, fun, or insightful, Ravage is as empty and dull as horror movies tend to get. The debut feature effort from writer-director Teddy Grennan isn’t much more than a bunch of stock cliches and rip offs of horror classics strung together haphazardly with maximum style and minimal overall effort. It’s not the type of movie that’s bad enough to make overly conservative or sensitive viewers shiver with outrage over its graphic content, nor is it silly enough to be an ironic enjoyment. Ravage is nasty, but probably not in the ways the filmmakers imagined. The only thing chilling about Ravage is how much time it wastes en route to its obvious conclusion.

That conclusion is obvious since Ravage begins at the ending. Badly injured and heavily bandaged nature and wildlife photographer Harper Sykes (Annabelle Dexter-Jones) awakens in the hospital following a horrific ordeal. She’s being grilled by an unsympathetic local cop who thinks her story of terror is the result of a meth bender gone wrong. Harper explains via flashbacks that while on an assignment in an Appalachian-like wilderness (located “about a month’s long walk” from civilization, which is pretty laughable to think about), she witnesses a family of (surprisingly clean looking) hillbillies carrying out acts of torture. When it’s discovered that she was taking photos of their cruelty, the apparent leader of the gang, Ravener (Robert Longstreet), and his family decide to make the woman’s life a living hell.

Greenan launches into the crazy straight away, with no foreplay and constant pounding to follow. There’s no getting to know anyone, very little room for nuance outside of the villain giving an impassioned speech about how the family protects their land from capitalist interests (which would be noble, I guess, if they weren’t homicidal maniacs who abuse people and animals), and Bruce Dern of all people showing up for the film’s one “actorly” scene as an old man who seems kind. How much do you want to bet that he’s secretly involved with the crazy family? (Note: the odds aren’t very good.)

Ravage (which had a brief drive-in run last month as the bottom half of a double bill with the Russell Crowe thriller Unhinged) is a blur of sun drenched images, flourishes of gore, incessantly fast edits, and lots of screaming, snarling, and squealing hogs. It’s wrung from the overused, oily rags of every other knock off of The Texas Chain Saw Massacre, The Hills Have Eyes, and Wake In Fright, but with little of the shock value that have made those classics leave such indelible impressions. It’s a bog standard stalk, slash, and hide picture through and through that seems to exist just for the sake of existing. None of Grennan’s moments of bloody comeuppance for the villains or torturous setbacks for the protagonist are worth cheering or gasping over. They just happen so the film can move on to the next set piece.

I often strive to pay respect to the good aspects of any production (since every movie, no matter how bad, is made by at least a handful of people trying to do something good), but any positives I can offer up for Ravage will be faint praise given how dishwater dull the whole thing is. But here goes nothing:

Jones gives a credibly frightened and empowered performance that’s better than the film deserves, especially when one considers how exhausting and painful it is to play this sort of role in a horror flick. For his part as the chief baddie, Longstreet is so wildly over the top that he brings a slight spark of manic energy that the film needs, even if the performance seems out of step with the rest of the film. There’s not a lot of dialogue for huge stretches of Ravage, which is fine enough when the actual dialogue is as bad as this. While the film’s industrial/synth/orchestral score is thoroughly annoying, obtrusive, and tone deaf, I can’t say that the sound mix is bad. And the final gory shock of Ravage – although telegraphed well in advance by a never-ending speech from the villain – is novel and suitably gross by horror movie standards. That final shock seems to be what the entire film is built around, and while it’s clever, one wishes it were in a better movie. (I also have to give a special shout-out to the film’s only “so bad it’s great” moment, which comes early on during a blurry, quick cutting montage where one can hear angry dogs growling and barking, but when the camera cuts to a brief shot of one of the animals, it looks remarkably calm and chill.)

One doesn’t need to suspend their disbelief too much for Ravage, despite some plot holes so large and baffling that they border on the avant garde. It’s the type of movie that works best if you’ve never seen one of these thrillers in your life. If you have nothing to compare it to, Ravage could be judged positively or negatively on its own merits. If you have seen anything that it’s trying desperately to pay homage to, then Ravage is nothing more than a time suck.

Ravage is available on VOD in Canada starting Friday, September 11, 2020.