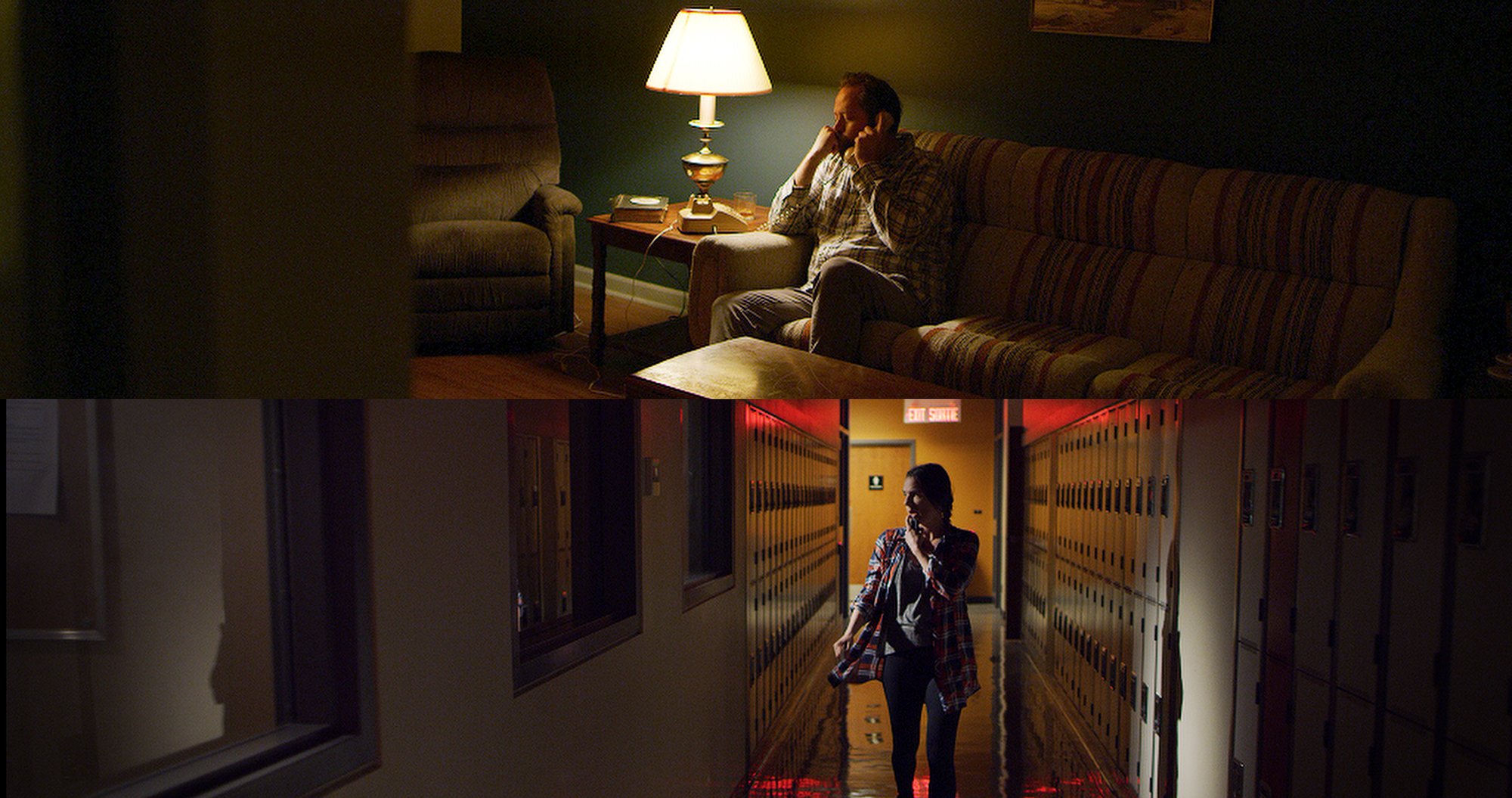 Last Call is an ambitious, but unpretentious Canadian drama built around a gimmick that has fallen flat on its face for other filmmakers, but works rather well for the subdued and sad story being told here. Last Call is a film told through the use of constantly running split-screen to depict two halves of the same story unfolding at once, and while other films to employ this technique like Wicked, Wicked and Timecode certainly look cool, they’re more often than not trotted out as answers to trivia questions rather than heralded as great works of cinema. Last Call, directed by short film and music video veteran Gavin Michael Booth, might be the first one of these projects to actually work. It’s not a perfect film, but it has a strong, heartfelt message, and Booth understands the limitations of his chosen style.

On one side of the screen is Beth (Sarah Booth), a student and single mother about to start her overnight shift as a janitor at an employment agency. She doesn’t want to be there. Her 12-year-old son still hasn’t come back for the night. She’s trying to get out of her shift and has been frantically calling everyone she knows to find out her son’s whereabouts. On the other is Scott (Daved Wilkins, who co-writes and produces alongside the director), who starts his night drinking heavily at the bar before returning home and entertaining thoughts of suicide. Instead of calling for an ambulance or a hotline for those in distress, Scott accidentally dials the number of Beth’s office. Beth answers, and while she has problems of her own, the woman decides to help this stranger rather than abandoning him in his time of greatest need.

Each half of the screen is made to look like one unbroken take, with the audio switching back and forth between stories whenever the two leads aren’t speaking to one another. Last Call keeps its staging relatively simple outside of the opening set-up where Beth is driving to work and Scott is leaving the bar and heading home. As Beth, Booth has the harder go of things when it comes to keeping the timing to make Last Call work, having to constantly navigate the corridors of the office she finds herself in order to make sure the character is trying to balance work, her own fears, and this new, unexpected responsibility. Although the split screen and simultaneously running long takes sounds like an excuse to make things stylish and less static, director Booth uses it here for more genuine reasons. 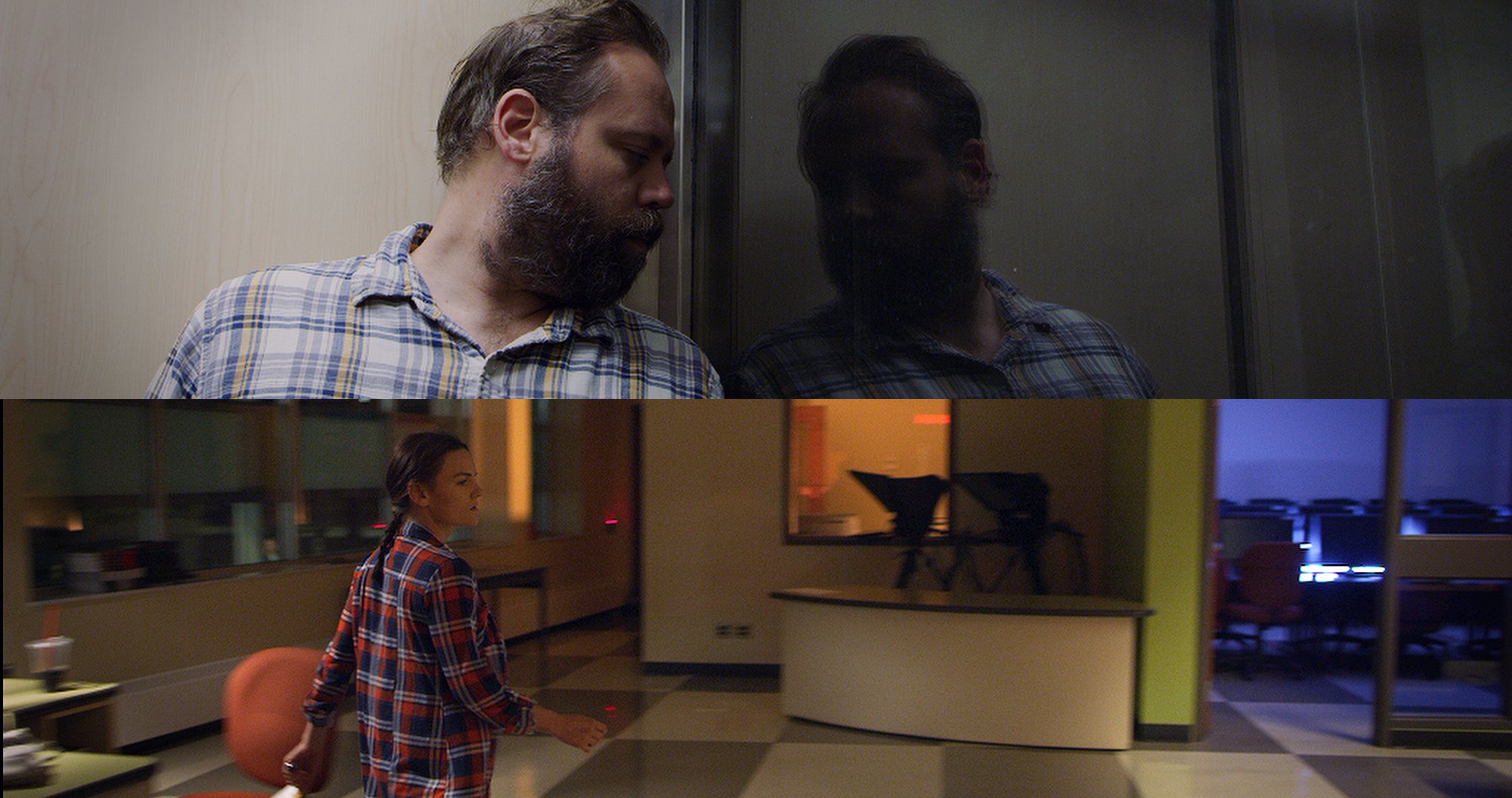 Although Booth has made a name for himself by directing a few gruesome horror movies in his time behind the camera, Last Call is something vastly different and more personal. It’s a kinetic thriller of a more humane kind, and one that’s doing everything in its power to not be exploitative. The split screen and unbroken takes (nicely captured by Seth Wessel-Estes) are there because Booth wants to reassure the viewer that Scott will never be fully left alone. Whether the character knows it or not, someone is always watching him, and there’s a curious and effective amount of comfort to be found in that. The lack of edits helps to make Last Call feel appropriately sad rather than trying to turn it into a “race against the clock” picture, an approach that would’ve made Booth’s film a lot harder to be taken seriously. The leads display an appropriate level of comfort and distress without overselling or turning the script into a melodrama. Last Call is a film that’s very respectful of its premise and characters, right down to the score – courtesy of Adrian Ellis – which is powerful without hammering home the suspense aspects of the story in a bid to goose the audience.

Last Call is a simple story that’s quickly paced and well told, but the audience still has to suspend a healthy amount of disbelief to fully buy into the pressure cooker nature of Beth’s situation. There are some contrivances, conveniences, and nagging questions as to why Beth helps as long as she does, but Booth’s film is so empathetic and focused on helping that it’s hard to find any greater faults. The message at the heart of Last Call about the importance of reminding those in greatest need that they’re not alone is one that’s especially relevant today, and it’s clear that everyone involved wants to see this story handled in a careful manner. That’s more important to a film like this than any number of stylistic gimmicks.

Last Call opens on Friday, September 18, 2020 at Imagine Cinemas Elgin Mills in Richmond Hill, Downtown Movie Lounge in Sudbury, and Imagine Cinemas Lakeshore in Tecumseh, with all proceeds going to the Canadian Mental Health Association. If you choose to see a film in cinemas, please take all necessary precautions. Practice social distancing, wear, and mask, and please stay home if feeling ill. The film will be available everywhere on VOD in late October.