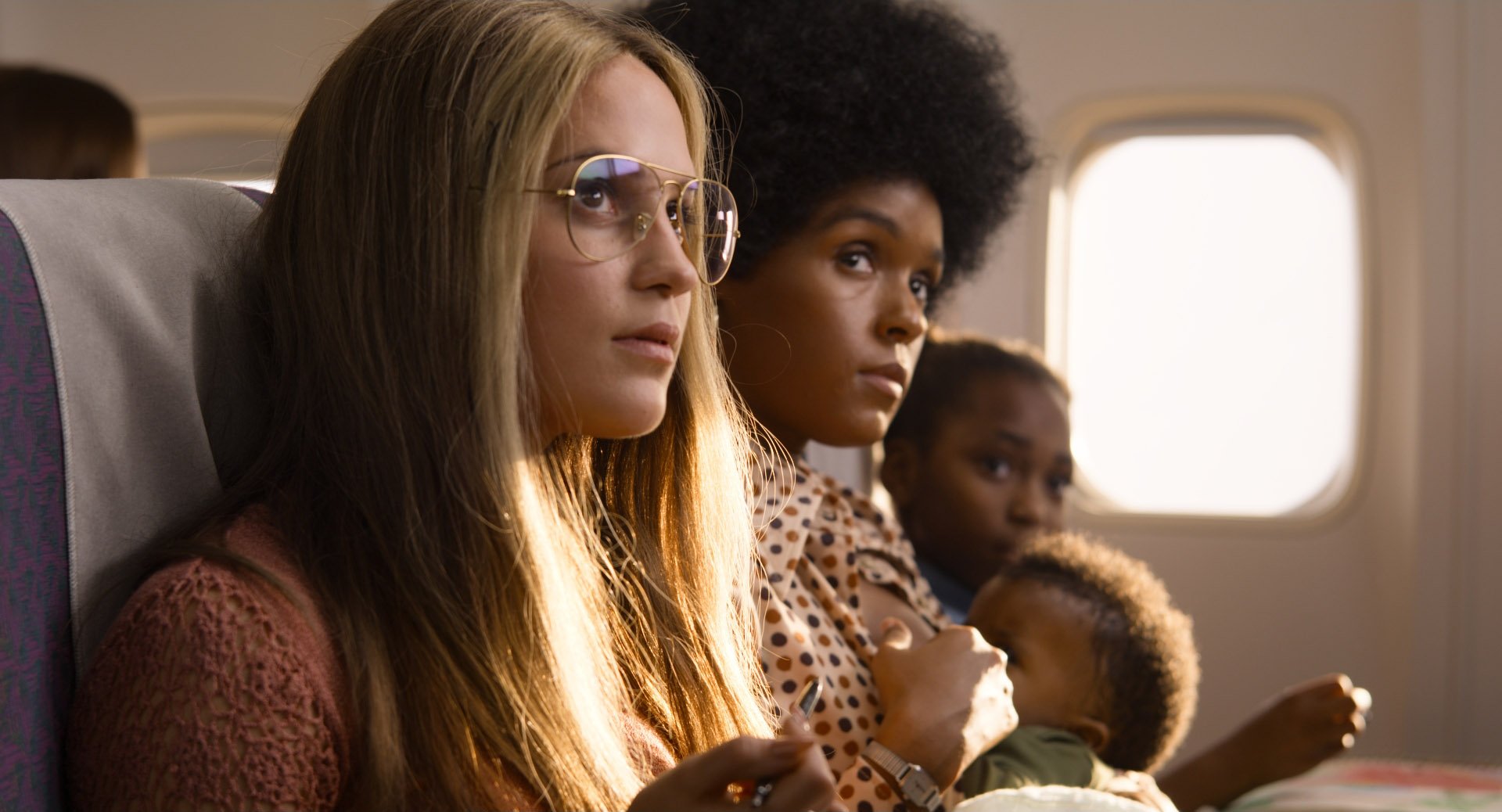 The Glorias, stage and screen auteur Julie Taymor’s take on the life and work of feminist icon Gloria Steinem, exists in a narrow space between being a novel take on biopic conventions and an unwieldy disaster. Like all of Taymor’s previous efforts, The Glorias feels like a film at war with itself, caught somewhere between overabundance of style and substance. And yet, The Glorias still boasts enough smarts and ingenuity to do right by the film’s subject, with a couple of great performances that keep Taymor’s loftier aspirations from spinning completely out into orbit.

It’s hard to describe the plot of The Glorias, as it’s both non-linear for a great deal of the picture, and, at the same time, a pretty simple and straightforward retelling of seminal moments in Steinem’s life. Director and co-writer Taymor bounces around Steinem’s life to illustrate how her experiences coloured and shaped her writing and activism. As a child and teenager (played by Ryan Kiera Armstrong and Lulu Wilson, respectively), Gloria was captivated by her wheeling-dealing huckster father (Timothy Hutton), but would eventually be left alone to care for her depressed, medically ailing mother (Enid Graham). As a young woman, Steinem (Alicia Vikander) would travel the world for insight, becoming a journalist that would put her heart and soul into every piece she wrote. When she entered her middle ages years, Steinem (Julianne Moore) would eventually parlay her experiences as a woman, activist, and journalist into the publication of Ms., the first and foremost magazine devoted to feminist issues.

The first half of The Glorias bounces back and forth between Steinem as a child and as a younger woman, and the results are scattershot and unnecessarily choppy. The individual scenes where Gloria deals with competing views on femininity and patriarchal mistreatments are all fine enough on their own, but the constant flitting between the two time periods is often done without reason or warning. The result is a lot of narrative whiplash that kills off any momentum the story might be building. What’s worse (or perhaps better, I’m still not sure) is how this time shifting structure is all but abandoned entirely once Ms. goes into publication and Moore’s performance as Steinem takes over at the wheel. From that point on, The Glorias settles into some degree of conventionality, which makes one question why the early jumbling of the narrative was warranted in the first place.

Despite the structure’s obvious problems and pacing issues, however, The Glorias remains coherent in spite of the fussy nature of the script. In fact, Taymor deserves a good deal of credit for attempting to make a respectable, polished, Hollywood friendly biopic that bucks against conventional techniques. Like Steinem, Taymor is an artist with a unique voice that she asserts with pride and authority, whether her choices pay off or not. Much like her previous stage and screen efforts (The Tempest, Spider-man: Turn off the Dark, Across the Universe), The Glorias isn’t above lapsing unapologetically into out-of-place and almost out of context psychedelic freak-outs.

The framing device for the film (if one could really call it that) revolves around all incarnations of Steinem discussing their life on a black and white bus ride to an indeterminate location. There’s a random tapdance sequence in a black owned and operated barbershop, strangely rendered animation, a bit involving a knife thrower that looks more at home in a Baz Luhrmann production, and an absolutely bonkers sequence where Steinem’s absolute owning of a chauvinistic interviewer spins wildly out of control. Without these elements, The Glorias wouldn’t be a Taymor picture, but they also feel superfluous in an otherwise conventional film. On one hand, these touches give The Glorias a degree of unpredictability that sets it apart from other similarly pitched biopics. On the other, Taymor can’t quite figure out how to organically incorporate these uncanny beats into the story. 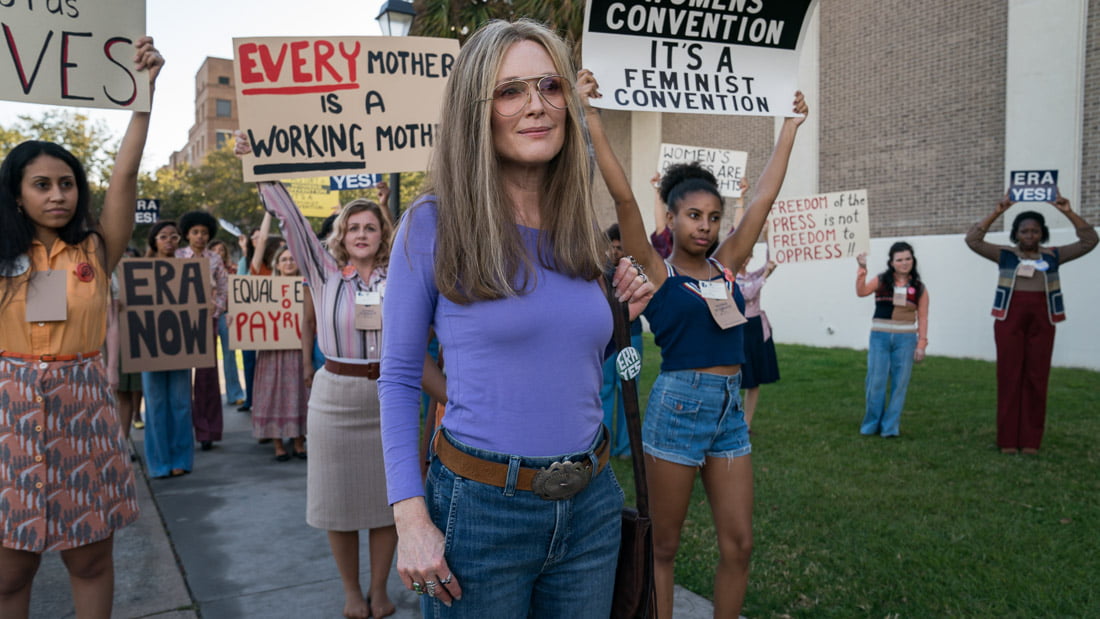 But the substance of the narrative and the performances given in service of it keep things grounded and respectable, never forgetting Steinem’s contributions to feminism and the person she was outside of the brightly shone spotlights and political crosshairs placed upon her. Where The Glorias succeeds the most is in its depiction of how activists don’t come about their beliefs all at once. The performances and writing of The Glorias eschews iconographic portrayals that like to suggest activists as emerging fully formed by seminal moments in their lives, and instead prefers a more realistic approach. Steinem’s approach to feminism and equality is depicted as a continually evolving series of teachable moments rather than overly dramatic set pieces. It’s a measured approach that more films about noteworthy political and cultural figures should adopt, and yet it’s still found in a film where the style is always threatening to steamroll some wonderfully understated insight.

All four actresses tasked with playing Steinem are perfectly cast, and while Moore is a natural choice to portray an icon of the women’s liberation movement, it’s Vikander who seems like she was born to play this part. Moore gets a chance to play the more fully formed version of Steinem, and she’s as fine of a performer as she usually is, but Vikander is extremely adept at the small details and buds of ideas that can bloom into meaningful flowers later in life. Vikander’s Steinem is eager, powerful, and still somewhat insecure about how her voice could be used to greatest effect. Vikander’s turn also blends seamlessly into Moore’s, making their performances into a nicely balanced tandem act. There are also a slew of notable supporting performances from performers playing other notable figures from the era, including Janelle Monáe as Dorothy Parker Hughes, Bette Midler as Bella Abzug, Lorraine Toussaint as Flo Kennedy, and Monica Sanchez as Dolores Huerta.

The Glorias also never loses sight of the bigger picture, which is the set of contributions Steinem and her collaborators made to feminist politics and culture. The Glorias speaks bluntly and passionately about inclusivity, the rights of workers and indigenous peoples, sexism, double standards, racism, equal pay for equal work, and visibility for black and queer people. These issues are raised often through simple, but effective moments of discourse between characters. In these moments, Taymor eschews style in favour of a more reality based approach, and it’s the right decision, even if it doesn’t make the film look particularly different from other films about people fighting for their right to be heard and seen.

Overall, The Glorias might not be as flashy and eye popping as Taymor’s previous efforts, but it’s still very much a Taymor film. It’s messy, ambitious, original, and always keeping viewers on their toes. The Glorias always teases leaping off the rails, but Taymor wisely keeps the humanity and integrity of Steinem and her work firmly in check. Depending on one’s feelings about Taymor (of which there are many differing opinions), The Glorias might be her best, worst, or least production. Much like Taymor’s subject, it’s a project built to invite divisive opinion, and for what it’s worth, the film does a pretty fine job at accomplishing its task without making any apologies or concessions.

The Glorias is available in Canada on VOD starting Friday, October 2, 2020.