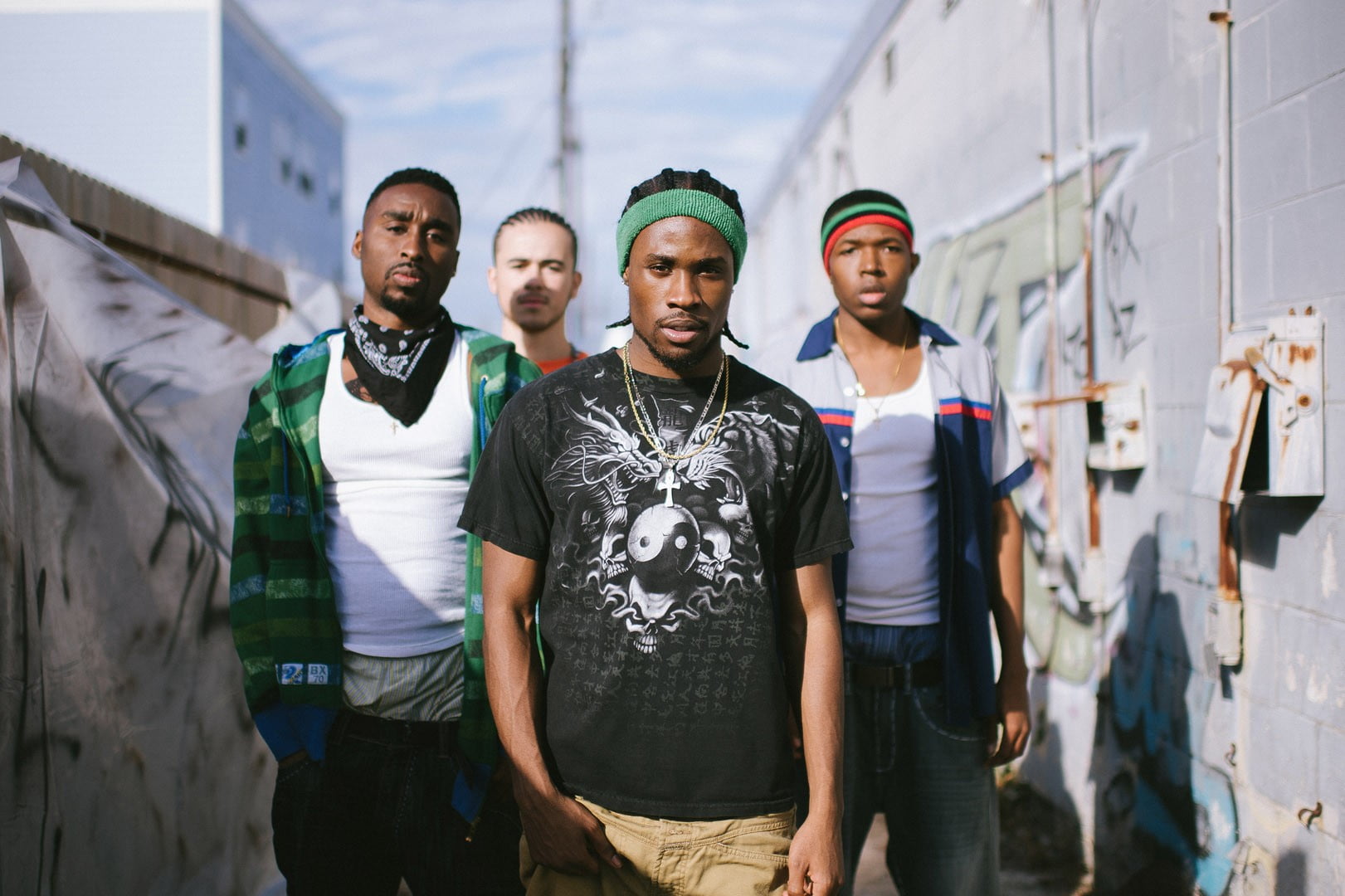 Cut Throat City, the latest directorial effort from Wu-Tang magnate and multi-hyphenate talent RZA, is a film that knows exactly what it wants to say but never decides on how to convey the message. Stuck in an unusual limbo between wanting to be a realistic crime thriller, an over-the-top crowd pleaser, and outright arthouse fare, Cut Throat City is trying to please all of RZA’s sweet spots at once, but it amounts to not much more than a thoughtful mess. When taken as a whole, Cut Throat City is one of the most baffling, tonally inconsistent, and slapped together projects of the year. Broken down into individual parts, scenes, performances, and ideas, however, there’s a lot more to be found.

Four friends living in New Orleans’ Ninth Ward just after Hurricane Katrina in 2005 are struggling to get their lives back on track after one of the most devastating natural (and somewhat avoidable) disasters in history. Recently married and trying to provide for his wife and child, James (Shameik Moore), a.k.a. Blink to his friends, isn’t having any luck getting his career as a graphic novelist off the ground. His closest friend – the quiet and intelligent Andre (Denzel Whitaker) – tries to help Blink as best he can, but times and tensions are tight. Miracle (Demetrius Shipp Jr.) is struggling in the dope game, and Creole white boy Junior (Keean Johnson) has dreams of starting a dog breeding operation, but like his friends, has few tangible prospects. Desperate for any sort of come up, they turn to Bass (T.I.), Blink’s dangerous gangster cousin, to give them some work. Cousin Bass tells the mentally and physically ill equipped young men to rob a nearby casino, a job that will go horribly awry in more ways than they initially realize.

Early on, during a scene where the friends are arguing pop culture nuances on Blink’s wedding day, Miracle speaks a line of dialogue that might as well be RZA’s mea culpa and the driving force behind Cut Throat City: “That shit is fake, but you can feel the realness.” Although RZA and screenwriter P.G. Cuschieri never speak down to the anger, frustration, desperation, and fear felt by those who were abandoned by the U.S. government in the wake of Hurricane Katrina, Cut Throat City remains patently unbelievable because the film is so sloppily assembled. A film that places its social messages front and centre for all to see is an admirable one, but when the story built around those talking points is frustrating and unsatisfying to watch, the whole thing is almost rendered pointless.

Cut Throat City is a film so overstuffed with conflicting styles and ideas that its best points are often getting buried beneath RZA’s almost schizophrenic directorial instincts. From moment to moment, it’s impossible to tell what kind of movie Cut Throat City is going to turn into. It can cycle through being a slice of life comedy, a cutting social drama, a thriller, a dialogue driven Tarantino knock-off, an in-depth character study, or an avant garde bit of weirdness that’s more in line with films made by RZA’s good friend and frequent big screen collaborator, Jim Jarmusch. Cut Throat City bounces around between these wildly different oil-and-water tones like a superball that’s been shot into a squash court by a canon. It’s a dizzying array of competing tones that could’ve been captivating if the film itself wasn’t so slow and boring on the whole, marred by an unnecessary and unevenly applied time shifting structure that confounds and slows the pace down rather than cleverly revealing long kept secrets to the viewer. 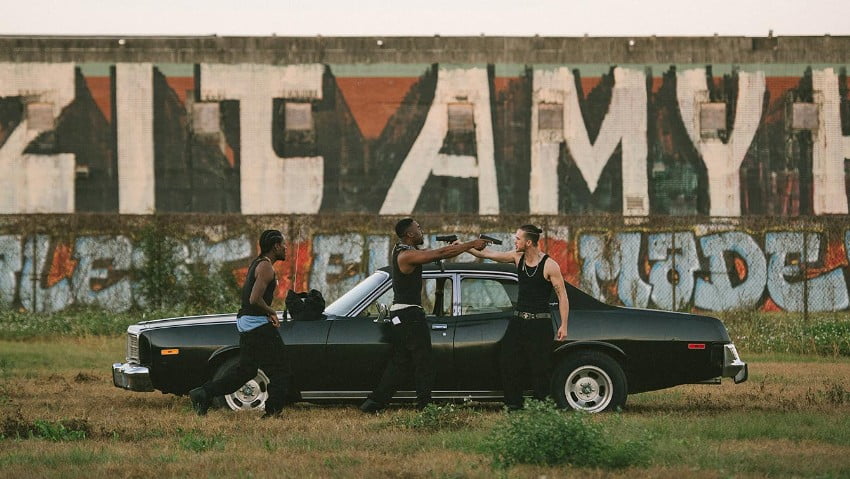 As a heist thriller, Cut Throat City has a pronounced lack of action and tension. The former could be a side effect of trying to make a star-studded movie on a shoestring budget, leaving little left over for large scale set pieces. But there’s little excuse for Cut Throat City to feel this inert and meandering. RZA clearly wants to give his stacked cast of familiar and up-and-coming faces plenty to do with their characters, and writer Cuschieri more than obliges. There’s enough “character” in Cut Throat City to fill a dozen movies, and a lot of it is interesting and admirable. But so much time is spent watching these overlapping and combative personalities discussing music, philosophy, religion, conspiracy theories, mythology, and world history that there’s little time to develop the plot. What’s worse, this abundance of character in service of a tonally adrift movie means the messages at the heart of Cut Throat City aren’t put to great use, either. It’s sounds and moves like what a lengthy conversation with RZA might be like, only here there’s no chance for the viewer to engage in the conversation, making Cut Throat City feel resoundingly one-sided.

It would be easy to classify Cut Throat City as the sort of project that has been stunt-cast to within an inch of its life, but the sight of seeing a bunch of big name performers popping up in RZA’s fever dream of a movie is definitely a highlight, even if these actors all seem to be inhabiting completely different movies. Isaiah Washington camps it up to the heavens as a bizarro mortician. Wesley Snipes hams it up with an inconsistent Creole accent as Blink’s unusually pop culture savvy, backwoods living father. T.I. and Terrence Howard engage in a somewhat entertaining battle of actorly one-upmanship to see which of them can come across more like a classic Blaxploitation villain. Rob Morgan strikes an unusual tone as a crooked cowboy cop. Ethan Hawke has a few great, but strangely underdeveloped scenes as a city councillor who wants the casino robbery solved as quickly as possible. All of them are memorable, but they all fit so unevenly into the narrative of Cut Throat City that one begs for either more simplicity or a longer narrative where all of these characters can breathe and thrive. RZA called in a lot of favours for Cut Throat City, and while his cast obliges, none of them can paper over the story’s gaping narrative and emotional holes.

The best and most convincing relationships to be found in Cut Throat City are the ones shared between Shipp and Moore and a subplot involving the investigating detective, played by Eiza González. The push and pull between Blink (who isn’t as smart as he thinks he is) and Miracle (who isn’t as hard as he thinks he is) gives Cut Throat City most of its emotional weight and impact, elevating the standard “smart guy and loose canon” dynamic most crime thrillers run on to thoughtful, different heights. Shipp and Moore are terrific, further cementing their status as young actors to keep an eye on in the future. And for her part, González nearly steals the show from everyone she shares a scene with, offering a commanding and unwavering presence that the rest of the film so desperately needs. Had RZA pared his film back to focus on these characters exclusively and the challenges they face on a daily basis, the faults of Cut Throat City would be a lot easier to overlook.

RZA’s latest builds to a twist ending that holds little dramatic water, but it also feels like the only proper way to close out a film that’s searching for its own voice and identity. After over two hours of waffling between realism, cliches, and surrealism, the conclusion of Cut Throat City wasn’t going to salvage something this wildly uneven, but it does point to some self-awareness on the part of the filmmaker and nicely underlines the message he was struggling to convey from the start. It’s certainly not a forgettable movie by any metric. The good bits are worth pondering after the film has ended, and the bad bits will make the viewer wonder where everything went so far off the rails. With a bit more judicious editing and focus, Cut Throat City might’ve been this generation’s Dead Presidents. Instead, it’s a unique film that becomes a victim of its own originality.

Cut Throat City is now available to digitally purchase in Canada. It will be available on VOD, DVD, and Blu-Ray on October 20, 2020.