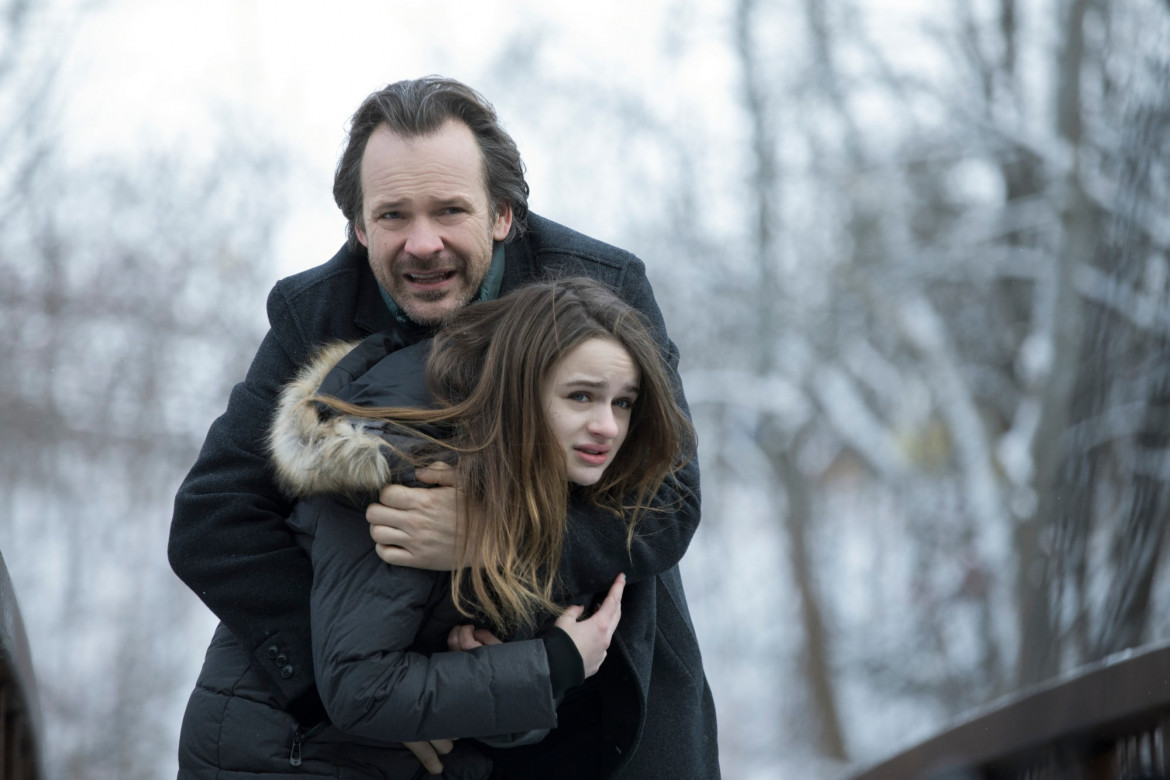 About all the forgettable suspense thriller The Lie will be remembered for is the sight of watching a talented cast of performers trying their best to act out a ludicrous story with straight faces. The Lie – an inferior remake of the already so-so 2015 German film We Monsters – grows unintentionally hilarious the longer Canadian writer-director Veena Sud tries to play the implausibly twisty story at face value. Although it’s a slow, plodding, flavourless sort of thriller, The Lie almost becomes entertaining in spite of its own goals. That’s certainly something, but I’m sure that wasn’t the intent.

Fifteen year old Kayla (Joey King) isn’t thrilled that her mother, Rebecca (Mireille Enos), is making her go away for the long winter weekend to a ballet competition. Rebecca drops Kayla off with her musician father, Jay (Peter Sarsgaard), so he can drive her there. On the way, Kayla spots her best friend and fellow dancer, Brittany (Kawennáhere Devery Jacobs), waiting for a bus in the cold and snow. Kayla and Jay offer Brittany a ride, but things take a frightening turn when they stop to take a potty break in the middle of the woods. Kayla claims to have pushed Brittany into a frigid, raging river. After Jay is unable to rescue Brittany, the family begins to panic, with the ex-spouses both agreeing to keep their daughter’s misdeed a secret.

Out of the gate, The Lie does a fine job of setting a tone and mood, thanks to some appropriately frigid colour grading and cinematography. Making the most of its “upstate New York” setting (which is clearly Toronto, as evidenced by the street signs and garbage cans everywhere), Sud has a firm handle of her story’s sense of place and temperature, but little else. The direction and dramatic tone – where everyone speaks in hushed tones until they have to shout at one another – feels indistinguishable from any of the television series Sud has worked on recently (The Killing, Seven Seconds). Sud keeps going back to the same cliches time and again throughout The Lie, often generating suspense through wondering how long it’s going to take characters before they answer a constantly ringing, unfortunately timed phone or doorbell. It’s the kind of trick most films can only get away with once, but The Lie attempts it no less than half a dozen times in only ninety minutes, growing more risible every time. It’s a bit of repetition that I hope was supposed to be funny, but somehow I doubt it.

Most of the film is set in Rebecca’s sparsely decorated, modernist home, which feels half finished in a bid to probably make things seem more symbolic than they actually are. “Look at all the negative space between them!,” the film seems to shout. It’s a miscalculation that doesn’t fully work with the underlying intensity of the material. In a bid to make Sud’s material seem more elevated, streamlined, and refined, The Lie instead strikes as drab, monotonous, and underdeveloped at every step of production. 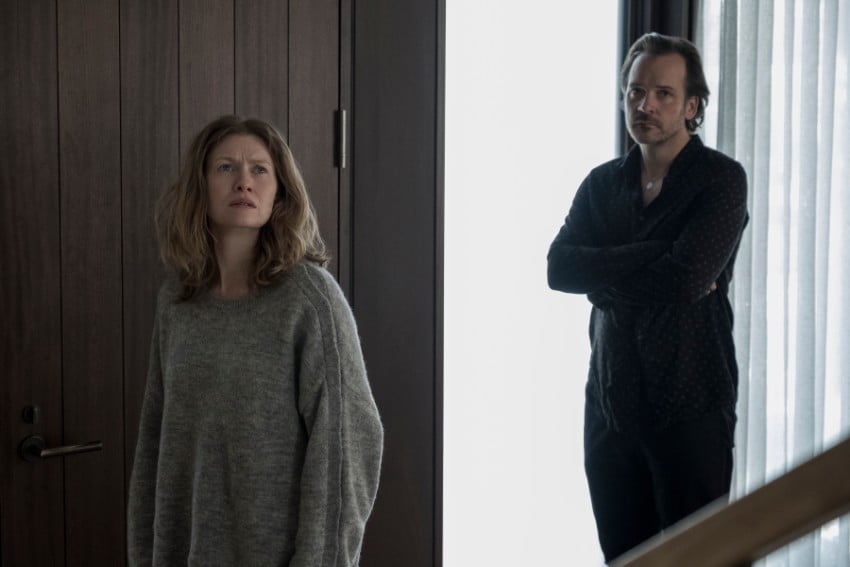 The Lie comes with a kernel of a great idea that has proven fruitful in other productions, which is probably why it was able to attract some reputable actors. There have been plenty of dramas, thrillers, and horror movies questioning how far parents will go to protect the future of their children, and while it isn’t an original concept, it’s still a dramatic question worth wrestling. Similarly, there’s no shortage of tales where one lie begets bigger, more dangerous untruths, because such a premise is easy to buy into on paper. Unfortunately, there’s nothing believable about how the ridiculous escalation of The Lie.

Watching performers like King, Enos, and Sarsgaard struggle to keep something this increasingly ludicrous on track is a chore. With every increasingly bad and self-destructive decision made by the family, it’s impossible not to wonder what keeps the whole plot from falling down. The Lie is the sort of narrative that requires more than mere suspension of disbelief. It requires outright magical thinking; the sort of dummy plot where things would end in seconds if the entire cast of characters weren’t so maddeningly oblivious. All of the various swerves and escalations are in service of a “big twist” that’s both poorly delivered and spotted coming from miles away. The grand finale of The Lie isn’t all that surprising, but it’s also annoying to sit through something this obviously pandering to get to that point. It’s also never campy enough to be laugh-out-loud funny, but rather something that will result mostly in viewers shaking their heads and facepalming.

If The Lie sounds familiar outside of the fact that it’s a remake, that’s probably because it premiered at the Toronto International Film Festival back in 2018 to little buzz or acclaim. After sitting around on the shelf for a couple of years, its production company – current genre titan Blumhouse – has decided to dump it on a streaming service alongside a handful of other titles that had limited commercial prospects (and at least one of which is quite good). Although it’s being marketed as another horror movie from Blumhouse timed to the Halloween season, viewers will be baited and switched into watching a barely coherent mess that’s anything but thrilling. The Lie is a film whose ultimate fate isn’t all that surprising, but unsuspecting viewers should still be wary.

The Lie is now available to stream on Amazon Prime Video.