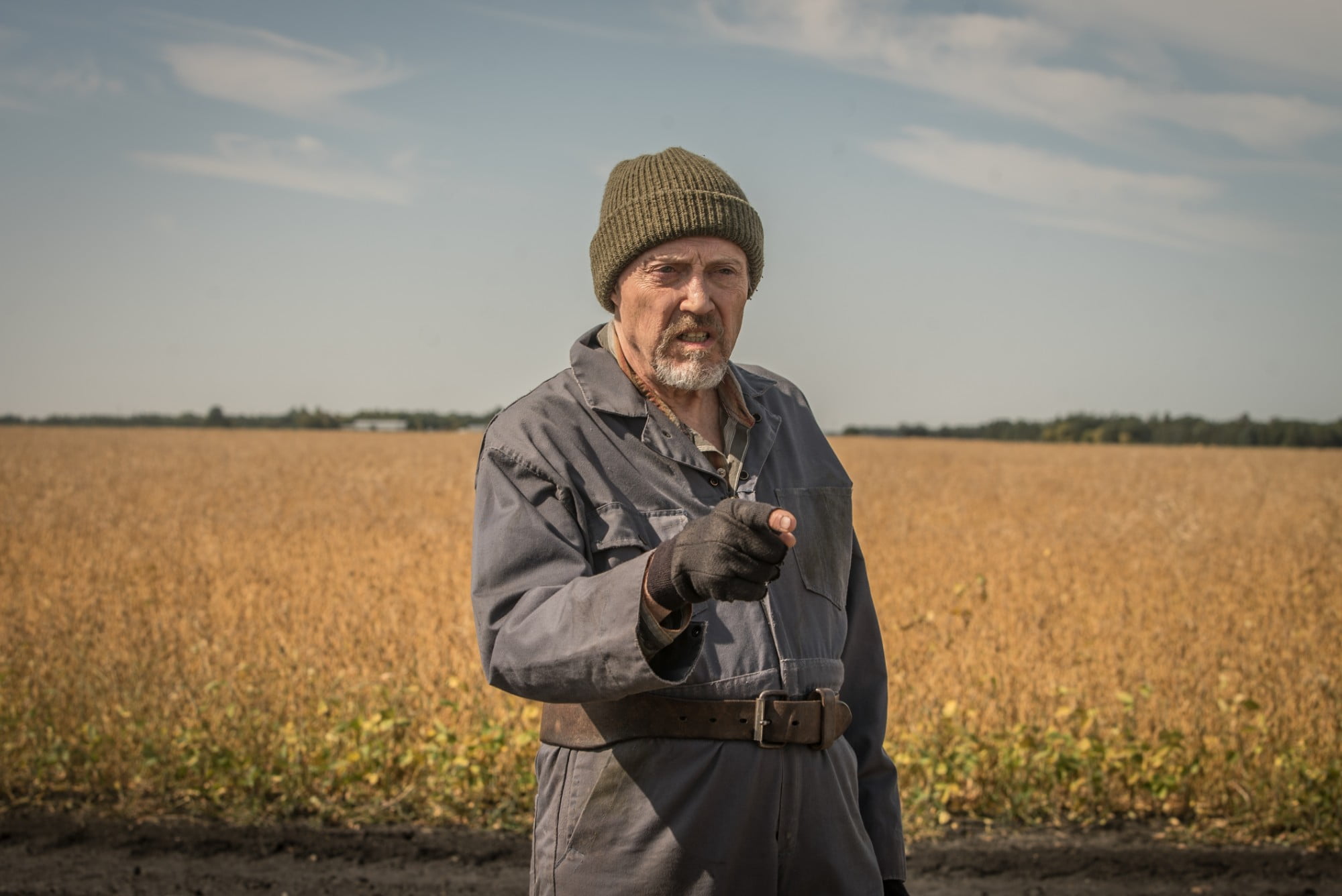 A well acted and unusually concise David versus Goliath tale, the Canadian drama Percy coasts along breezily under the strength of its own convictions. Based on the true story of a prairies farmer who dared to stand up to big business in the late 90s, Percy glosses over a lot of the courtroom dealings that real life case was most well known for in favour of something more humane and universally understandable. On one hand, Percy doesn’t waste any time making its points. On the other, it’s reductive and in such a hurry to get to its closing remarks that it’s entirely up to the cast to make sure their characters have some degree of depth and personality. The cast is good enough to pull it all off, but Percy is almost a missed opportunity.

Christopher Walken – who tones his trademark eccentricities way, way down for this one – stars as Percy Schmeiser, a seasoned and successful canola farmer from Bruno, Saskatchewan, who’s slapped with a copyright and patent infringement lawsuit by agribusiness giant Monsanto. The multibillion dollar conglomerate has proof that a specific pesticide resistant gene found in their particular brand of seeds – ones that farmers need specific contracts to grow – has been found illegally in Percy’s crops. Percy has never used Monsanto products in his life, preferring to stick to a seed saving technique that hasn’t lost him a harvest in fifty years. If the seeds did end up planted in his fields, they must’ve gotten there through storms and winds that carried them from neighbouring properties, something that’s just a natural part of farming. Aggravated by Monsanto’s extortionary tactics, Percy and his wife, Louise (Roberta Maxwell), fight back, taking their case from a tiny courtroom in Humboldt to the Supreme Court in Ottawa, risking their reputations, livelihood, and nest egg in the process.

Director Clark Johnson and screenwriters Garfield Lindsay Miller and Hilary Pryor adopt a rather cut-and-dry approach with Percy. Every necessary story beat in Schmeiser’s story will be hit, but not much will happen in-between those peaks and valleys. The Schmeisers hire a reluctant small town lawyer (Zach Braff) who urges them to settle, they go to court, they lose, they get involved with an environmental activist (Christina Ricci) who wants to help with their legal costs, they appeal, Monsanto fights back with dirty tricks, people in the community stop trusting the Schmeisers thanks to the corporation’s slanting of events, their lawyer advises them to go no further, repeat variations on this cycle of events until the film reaches a satisfactory conclusion. It’s not a thrilling approach, and one that moves along too fast for its own good, but thankfully it’s also not a film overburdened by cliches or the pacing issues faced by most longform legal dramas. Johnson, Miller, and Pryor all have extensive television backgrounds, and Percy feels every bit like a competently crafted, but narratively flimsy small screen production. Really the only thing that feels cinematic here are the gorgeously shot farmland locations, with Manitoba substituting for Saskatchewan. 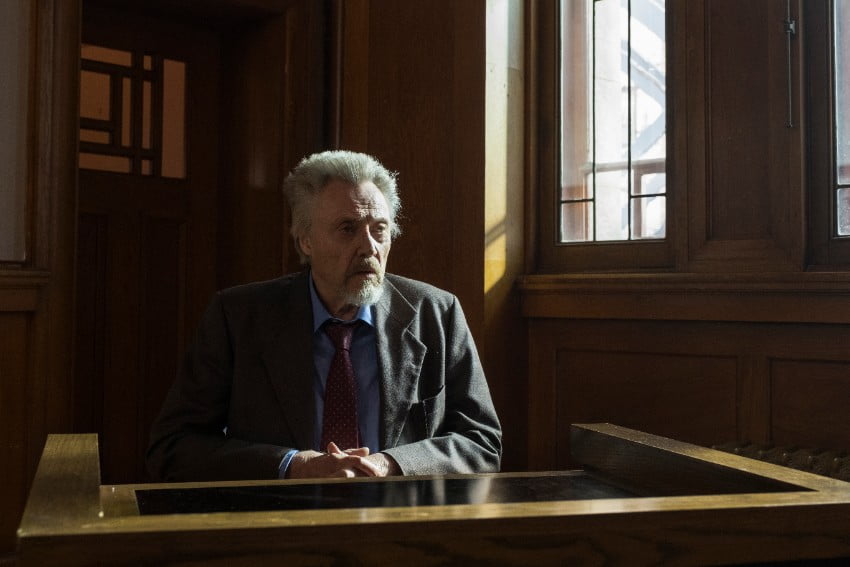 Not that Percy needs to be a pulse-quickening or ambitious movie. All it really needs to succeed is a chance to illustrate the various ways corporations strive to discredit anyone daring enough to stand up to them. If Percy loses in court, he not only has to pay damages, but also foot the bill for all of Monsanto’s high priced lawyers and court fees. Monsanto isn’t above issuing ultimatums to any farmers legally using their seeds that might be willing to provide character witness testimony to the defense. The lawsuit is scientific in nature, but Monsanto refuses to pay attention to the nature of science. Monsanto’s goal is to further corner the market by forcing smaller farmers into their fold. They’ll keep sending private investigators to Percy’s farm unannounced in a bid to intimidate the old man. They’ll spread rhetoric that Percy is a thief under the letter of the law, cutting into the pocketbooks of other farmers working alongside Monsanto, ruining almost all of the Schmeiser family’s friendships. It’s so overwhelming (and sadly unsurprising) that feeling empathy for Percy is effortless.

Percy assumes that merely illustrating how predatory Monsanto is will be enough for viewers to properly invest in the story. The filmmakers are half-way right. While it’s gutting to watch an elderly, hard working, blue collar person being extorted out of a sum of money the corporation suing him would see as chump change, it would be more impactful if the heroes were made out to be more than just good, honest folks. All that’s really known about Percy is that he’s a dedicated farmer who doesn’t like being put in the spotlight, even when he’s asked to travel to India and give a speech to help offset his legal costs. There’s not much else there. Maybe the real Percy Schmeiser wasn’t a complicated guy, either, but at least some of the other people involved with the case had to have something interesting about them. Percy operates under the misapprehension that blue collar people are identified only by their jobs and the fear of losing them. While that’s true in some cases, Percy is a film with powerful messages that’s lacking in overall personality.

Thankfully, Johnson has assembled a cast that’s capable of filling in a lot of gaps with their own natural charisma and talents. Walken’s performance as Percy is relaxed and magnetic, with the actor portraying a soft spoken man who can always summon the strength to keep fighting without fully losing his cool. Walken’s chemistry with his co-stars (especially when playing opposite Maxwell) feels authentic because the actor has stripped the character down to exactly what the script describes Percy as: an everyman. Braff and Ricci are both solid choices to play the old man’s defenders, but outside of a couple of scenes where they get to shine, their roles are confined mostly to the margins. Luke Kirby and Adam Beach have supporting roles as Percy’s stressed out son and closest farmhand, respectively, and while both actors add some much needed dramatic energy, their parts are thankless and superfluous overall.

For a film based around a landmark case that changed the face of modern farming practices on a global scale, Percy is decidedly low key. One could just as easily Google the case itself and probably learn a lot more than the film offers; the only difference being that they’ll miss out on some very watchable performances and stunning cinematography. It’s a perfectly serviceable movie that’s somewhat entertaining from moment to moment. Most importantly, the strength of the film’s anti-corporate bullying stance comes across just fine, and that seems like the main point for this to be made in the first place.