Well produced and up to the moment, Totally Under Control feels less like a great documentary and more like a dutifully assembled newsmagazine. Esteemed, prolific filmmaker Alex Gibney (Going Clear, The Armstrong Lie, Enron: The Smartest Guys in the Room) and co-directors Ophelia Harutyunyan and Suzanne Hillinger have seized upon an opportunity to illustrate the Trump administration’s failed response to the COVID-19 pandemic with great vigor and passion, timing their briskly produced film perfectly to the upcoming election cycle and the virus’ emerging second wave. Given that we still only have a fraction of information regarding the pandemic and the ways various global responses have been stunted or successful, Totally Under Control is a film that’s very much of the moment, and parts of it likely won’t age well. The whole truth of the story within the White House (if it ever comes to light) will likely be far more shocking and incendiary than anything Gibney and his crew can gather and prove from their sources. But the point here isn’t to give a history lesson about the 2020 global pandemic while it’s still unfolding. The point of Totally Under Control is to remind the American people (and their allies around the globe) why they should be furious with the country’s leadership.

Totally Under Control is an important and timely work that doesn’t have any known ending in sight, so a lot of the information found in Gibney and company’s latest is stuff that’s already well known to anyone who’s been paying attention to the news over the past ten months. Earlier this year, when the emerging coronavirus crisis was kicking off, the Trump administration told the American people they had nothing to worry about and that the situation was – in his own words – “totally under control.” Then, once many other countries in the world started going into full on lockdowns to contain the spread of the virus, the U.S. government begrudgingly agreed to do the same, vowing to get their economy back up and running in as little time as possible.

Cut to the present, and things certainly aren’t back to normal, especially in America, where infection rates continue to climb and Trump (who just last week was battling the virus himself) keeps moving the goalposts on what he deems to be acceptable losses. The wearing of masks has been politicized in the country, with many seeing their flouting of health and safety regulations as acts of patriotism. It doesn’t help matters much that Trump’s braintrust when it comes to responding to COVID-19 is composed almost entirely of “professionals” appointed because of their close connections to the president or their economic, religious, or political beliefs; not because they’re credible scientific minds. Pretty much anyone who criticized the Trump administration during the pandemic or spoke freely about disagreements with leadership were unceremoniously fired, and in some cases, never replaced with anyone else. 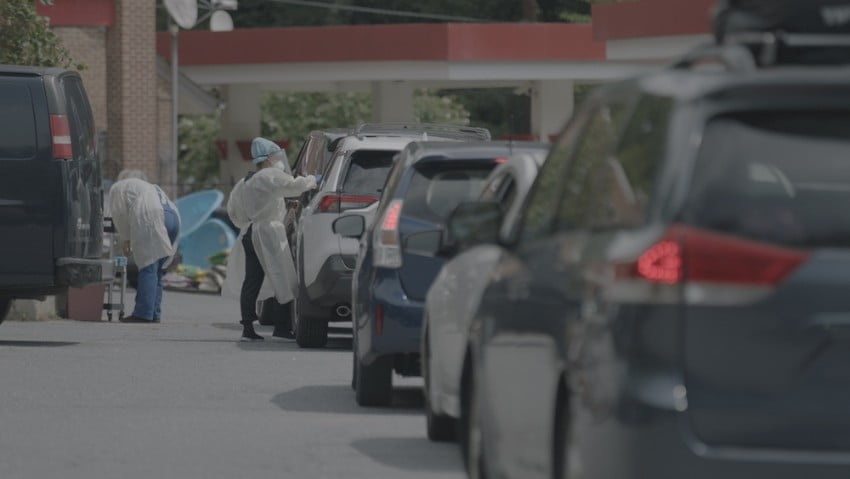 Totally Under Control is an impassioned, mournful polemical that doesn’t have to do too much deep digging to make its case, and plenty of interview subjects here are more than willing to share their anger and frustration. All Gibney, Hillinger, and Harutyunyan have to do is simply use Trump’s own contradictory, self-serving language against him. For a film that was produced on the fly and largely in secret over the past several months, Totally Under Control is a rigorously assembled documentary without an ounce of fat on it. While a lot of the facts here are well known and documented through various other sources already, Totally Under Control offers a one-stop volume on what’s known so far about the bungled American response. While the focus here is resolutely American (often neglecting that other world leaders have failed almost as spectacularly in their response to the pandemic as Trump has), Totally Under Control remains a vital, critical, and timely document.

Utilizing a homebrew form of Errol Morris’ interrotron camera system that was sent to interview subjects and Gibney narrating in a fashion akin to Michael Moore (albeit with nothing to laugh or be snarky about), Totally Under Control talks to the scientists, researchers, and front line workers that Trump should’ve been listening to the entire time. Countries like South Korea have done their best to contain the spread of the virus because their politicians largely stayed out of the way, leaving response up to scientists and doctors. That approach was a main reason why South Korea was able to avoid full lockdowns or economic shutdowns. In America, the response was left to partisan politicians seeking reelection and economists keen on getting the capitalist machine back up and running as soon as possible. Totally Under Control starts from this revelation and branches off to show how most of America’s issues were depressingly avoidable, thanks in no small part to an ineffective leader who kept repeating to his base of rabid followers that one day the virus would simply disappear “like a miracle.”

The Trump White House threw out pretty much everything Obama’s White House learned from the H1N1, zika, and ebola pandemics, and even ignored a newly written viral response playbook that was produced by their own administration last fall, which illustrated a then fictional disease from Asia that eerily echoes COVID-19. Earlier in his term, Trump had sold off a lot of infrastructure and supplies that could’ve helped his country fight the pandemic, and once things got tough, getting these necessary machines and PPE proved nearly impossible. Trump would pit states and government agencies against each other while they bid on lifesaving equipment. Bureaucracy was so rampant that some local governments couldn’t procure essential items without agreeing to go on national television to personally thank Donald Trump for letting them have it. The supply chain failed horribly, leaving frontline workers and first responders in constant danger. It seemed like every week, Trump was promising that a cure was just around the corner, even if it meant pushing untested and unproven drugs with dubious economic ties to the government. The economic divide between rich and poor grew exponentially, with certain occupations, races, and age groups perpetually at greater risk for exposure. All of this can be traced directly back to Trump’s ardent belief that the free market economy will save the country (and his own wallet).

This seems probably less like a film review and more like a fact dump, which nicely sums up the approach of Totally Under Control. There’s plenty of criticism to be found here, and all of it comes from the simple recitation of facts. It’s an impassioned work meant to hold those in power accountable in the moment, rather than after the fact. It’s a film made to help fix a broken country and hopefully prevent such a lacklustre disaster response from ever happening again. Like most documentaries, the appeal of Totally Under Control remains rather niche, meaning that I’m not totally sold on the idea that the people who need to see this film the most will take the time to seek it out. On the other hand, even those agreeing with the filmmakers might find some of this tough to take, like poking at a still oozing wound. Others still might question the validity of a documentary being released while its events are still unfolding at a rapid pace. But despite all these nagging questions, Totally Under Control is a film that knows precisely what it wants to say and how it wants to say it, which is more than one can say for the presidential administration it seeks to criticize.

Totally Under Control is now available in Canada on VOD.