Fatman has a premise that sounds far more raucous on paper than it appears in execution. If one were to hear about a movie pitting a broken down Santa Claus against a bratty kid and a psychopathic hitman, they could be forgiven for thinking such a premise would provide fertile ground for nasty, darkly comedic fun. Fatman has that premise, but it isn’t that movie, curiously choosing to play things relatively straight instead of leaning into the inherent and ghastly fantasy at the heart of the story. The result is a film that’s interesting at times, but not particularly entertaining as a whole.

Another Christmas has come and gone, and an increasingly weary Chris Cringle (Mel Gibson) has returned to his wife, Ruth (Marianne Jean-Baptiste), and home in the sleepy hamlet of North Peak, Alaska. Chris’ workshop has fallen on tough times, with outsourcing big box toy manufacturers capable of churning product out faster than his elves. On the verge of financial insolvency, Chris reluctantly partners up with the U.S. military to produce control panels for fighter jets during the offseason. While Chris is already at his lowest and most emotionally compromised, he doesn’t know that a wealthy, ruthless, and entitled grade school brat named Billy Wenan (Chance Hurstfield) has hired a wetworker (Walton Goggins) to murder the holly, jolly bringer of joy, after getting a lump of coal under the tree for being an asshole all year. The assassin, who happens to be an avid toy collector, also has a long simmering beef with St. Nick that makes him eager to take the old man out.

Director and co-writer brothers Eshom and Ian Nelms (Small Town Crime) have an idea that could’ve provided perfect viewing for those who prefer their seasonal content come with a healthy dose of cynicism and nastiness alongside a dash of good cheer. Taking Mel Gibson out of the equation – who isn’t the first person one would associate with yuletide joy – the biggest problem with Fatman is that it doesn’t seem sure if it wants to be a thriller or a comedy. Fatman owes a lot to knock-offs of the Coen Brothers and Elmore Leonard, with the Nelms struggling to carve out an identity of their own. Large swaths of Fatman play out like they’re trying mightily to appear like a snowbound take on No Country for Old Men with snappier dialogue, and the approach proves to be a miscalculation that sinks a lot of the potential fun.

The slow burn approach of Fatman is atypical, but gets things off to an intriguing enough start, with the Nelms siblings doing their best to flesh out the warring characters in full before locking them into mortal battle. Although he doesn’t look or act like Santa, Gibson’s performance provides an intriguing anchor for the film. Chris isn’t snarky, hard living, or antisocial. He’s just tired and frustrated. Baptiste provides a good deal of warmth as Chris’ concerned, supportive, and optimistic wife, striking up some solid, unlikely chemistry with Gibson. Goggins – who’s a pro at portraying unhinged killers – plays his (mostly) nameless assassin with a shred of hidden humanity beneath the character’s menacing exterior. And while it’s hard to credibly make a child a contemptible villain, Hurstfield is a revelation, offering up the best and most ruthless onscreen brat in an action movie since RoboCop 2.

The performances and characters are on solid ground, as are the appropriately quaint northern locales (some of which were shot in Almonte, Ontario, a major hub for shooting dozens of Christmas movies every year). But Fatman lets down its cast, characters, and setting down by forgetting to do anything interesting with them. Once Gibson and Goggins are set on their collision course, the script and film struggles with each of these characters’ interlocking storylines. Hurstfield disappears for a large chunk of the film, except for whenever he calls the hitman for a status report. Gibson is stuck having to act mopey while the government takes control of his workshop, which isn’t all that interesting, save for a nice supporting performance from Eric Woolfe as Chris’ head elf. Goggins works his sleazy charms well enough while crossing the United States and Canada and leaving a trail of bodies in his wake, but these moments are only slightly amusing and are largely divorced from anything else in the film. Both Gibson and Goggins are mired in stories that aren’t funny, exciting, and shocking, with the Nelms killing time for the middle third rather than enforcing their core premise.

A wild and over-the-top finale could’ve barely saved Fatman from the jaws of mediocrity, but this film doesn’t have that going for it, squandering another decent joke in the process. It could’ve been amusing to watch the barely prepared assassin trying to figure out how to infiltrate Santa’s domain now that it has been turned into a military base, but by this point Fatman is in a hurry to get things over with, offering up only the most perfunctory (and unsurprising) of final showdowns between good and evil. Fatman has a premise and cast that suggest it could be a lot of fun, but it plays like it was crafted by people who seem to have forgotten how to have a good time, whether trying to be naughty or nice.

Fatman is available in Canada on VOD starting Tuesday, November 24, 2020. 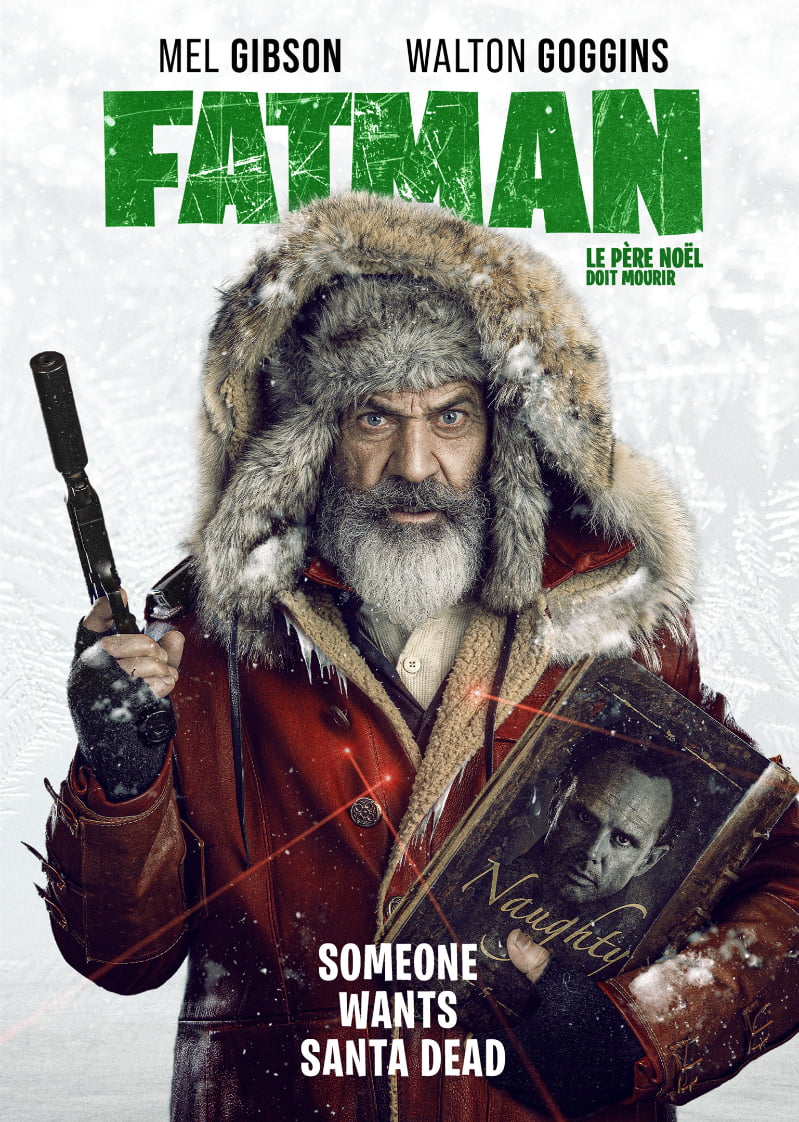