Honest Thief, the latest thriller where Liam Neeson exhibits a “particular set of skills,” isn’t high on action or campy fun, but it’s more interesting than most forgettable B-movies. Anyone expecting to see the increasingly weary Neeson cracking skulls and taking names will likely be let down by the chatty, low budget nature of Honest Thief, but those fans should’ve expected that from the diminishing returns of the actor’s most recent genre efforts. It’s one of those films that’s crafted to hide an aging action star’s limitations (despite the fact that Neeson was already pretty old when Taken came along to rejuvenate his career), but Honest Thief staves off outright boredom simply by giving an overqualified cast plenty of material to work with. There are some shootouts and chases to be found in Honest Thief, but it’s the character development and performances that save this one.

Ace safecracker and former Marine Tom Carter (Neeson) has pulled off eight bank vault robberies in the past six years by himself, amassing around nine million dollars. Branded the “In-and-out bandit” by the press and authorities (a nickname he hates and doesn’t fully understand), Tom makes the decision to leave a life of crime behind when he meets and falls in love with Annie (Kate Walsh), a divorcee who’s heading back to school to finish her psychology degree. Tom wants to marry Annie and start a life with her, but in order to do so, he feels compelled to confess his crimes and turn himself over to the Boston branch of the FBI. He calls and talks to a pair of detectives (Jeffrey Donovan and Robert Patrick) to try and cut a sweetheart deal in exchange for returning the cash he stole. The detectives, who are tired of people calling and claiming to be the “in-and-out bandit” don’t initially believe Tom and send a pair of junior agents (Jai Courtney and Anthony Ramos) to check out his story. When the younger detectives discover that Tom is telling the truth, the hothead of the partnership decides to doublecross the surrendering man and keep the money for himself. Suddenly, Tom finds himself caught in a set-up that can threaten his future.

Honest Thief is the second feature from director and co-writer Mark Williams, best known for his previous work as a producer on the likes of The Accountant and Netflix’s Ozark. Williams and co-writer Steve Allrich understand genre beats rather well, but Honest Thief doesn’t have enough of a budget or a wide enough imagination to mount anything spectacular. The little we see of Tom’s life as a masterful, slippery criminal is rather ho-hum, and the small handful of action sequences in Honest Thief are standard cat-and-mouse shootouts and low impact car chases. It’s all decidedly less than thrilling, but that’s where Williams and Allrich’s attention to character and the film’s casting choices come in to save the day.

As a character, Tom is so naive and overly honest that it’s hard to believe he hasn’t been arrested by this point. The decisions he makes when it comes to turning himself in are – for the most part – ridiculous and illogical. And yet, the character is written in such a way that the viewer appreciates Tom’s earnest sense of right and wrong, long before the requisite scene where he provides moral justification for his past criminal actions. Neeson isn’t playing Tom as if he were a hero or a villain, but rather as a tired, lovesick man trying to dig himself out of a hole. The desire of the character to keep things low impact here is rather refreshing in comparison to watching a film where an ex-con is driven back to vengeance. It’s actually a not-so-backhanded compliment to say that Honest Thief is a film about someone who just wants to get things over with so they can move on.

Williams provides a good amount of support for Neeson by making the primary supporting characters as interesting as the lead. Donovan brings some nice eccentricity to the “good cop” role, partially because the character has to constantly look after the dog he now has custody of following a divorce. (Donovan’s chemistry with the pooch, played by Tazzie, also offers a healthy dose of levity without being corny.) Courtney is clearly having a blast as a villain who desperately keeps trying to patch up his increasingly broken “get rich quick” scheme, and Ramos brings genuine drama and empathy to his role as a partner and family man who grows increasingly terrified with their situation. For her part, Walsh gets to play her part as more than a one note love interest, exhibiting good chemistry with Neeson and proving to be a capable accomplice in scenes where they’re apart.

If it weren’t for the actors’ efforts and a desire to tell a character driven story, Honest Thief would be a lot more forgettable and drab. It’s not a great looking movie, substituting the far less picturesque and distinct Worcester, Massachusetts for Boston, and showing obvious signs of budgetary constraints. Some of the editorial decisions – like awkwardly cutting away from an already punishingly lengthy dialogue scene to see what the villains are up to, only to go right back to the initial conversation already in progress – are suspect and ill advised. And action movie fans had better prepare themselves for the fact that 75% of Honest Thief is composed of lengthy, exposition heavy dialogues in cars, offices, and hotel rooms. It’s not what I was expecting, even from a late period Neeson actioner, but I can’t say I wasn’t invested in these characters and their problems. I wasn’t really entertained by Honest Thief, but it wasn’t a total wash, either.

Honest Thief is now available for digital purchase in Canada. It is also still showing in select cinemas. If seeing a movie in theatres, please take all necessary precautions. Wear a mask, practice social distancing, and stay home if feeling ill. It will be available on VOD, DVD, and Blu-Ray on December 29, 2020. 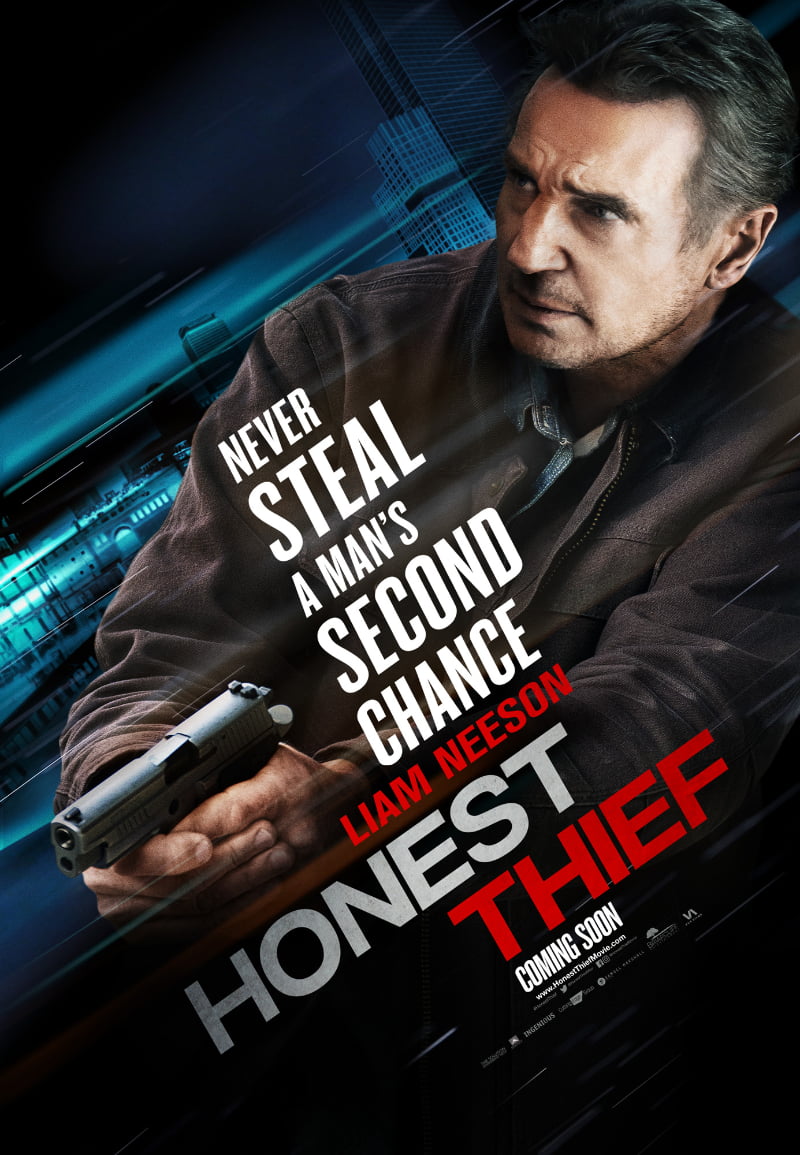