Almost as soon as it was announced back during the early days of our current global pandemic, the Michael Bay produced “COVID thriller” Songbird has been getting dunked on left and right. Understandably, for many, building a taut and bloody thriller around a worldwide catastrophe while similarly dire and fatal events are still unfolding in the current era is insensitive, exploitative, and dangerous. Those people aren’t wrong to feel those ways, but now that Songbird is actually releasing – following a quick, controversial production – there’s a newer and perhaps more important thing to talk about. Songbird is a terrible movie by most sets of technical, moral, logical, or quantifiable standards. Forget about the controversy or one’s feelings. Just avoid Songbird because it’s flat out awful.

Songbird picks up in 2024 Los Angeles, where the increasingly deadly pandemic has now mutated into COVID-24, a disease that can kill within twenty-four hours. (Lots of 24’s there, but that’s the movie’s logic, not mine.) Nothing asymptomatic to see here, folks. In Songbird, getting a cough or fever are flat out death sentences, despite the virus having a 56% mortality rate. Residents are on firm lockdown, under martial law, and are forced to take a phone app based COVID test every morning. Fail the test, and a member of the “sanitation department” (literally garbagemen repurposed as a militarized force) will whisk the infected away to one of a handful of “Q-zones,” which are basically deplorable concentration camps for the infirm.

Much of this information is set up by director and co-writer Adam Mason (who’s no stranger to making low budget horror flicks, but is strangely not responsible the first COVID flick to see light this year) via some opening credits where online conspiracy theorists shout about the infringement of their rights as Americans. I’m not sure if this is meant to be intense in the same way that the rest of the film blatantly rips off Tony Scott’s Enemy of the State aesthetic, or if it’s genuinely meant to cater to those who think we’re all doomed to die regardless of what we do to stop the spread.

There’s a main protagonist, I guess, but there are so many simplistic, interlocking subplots here that the term “hero” is a loose one. KJ Apa – who’s quickly becoming one of the least charismatic leading men of the era – plays Nico, a courier and former paralegal who’s part of the 0.1% of the human population immune to the virus. Those people have become the workhorses of the apocalypse, which is great because there isn’t a single medical professional or first responder in sight here outside of garbage men and military forces willing to kill at will. He’s in love with Sara (Sofia Carson), who isn’t immune and is watching over her grandmother. Nico has been saving thousands of dollars in hopes that he can pay for their safe passage to Big Sur, an area that hasn’t seen a positive case in six months. When Sara’s situation at home turns dangerous, Nico frantically moves up his timetable for leaving the city. Nico’s boss (Craig Robinson) tips off his employee that one of their biggest clients, a big time record producer (Bradley Whitford) and his wife (Demi Moore), are trafficking black market “immunity bracelets” that can grant anyone wearing them safe travel passage through checkpoints.

Songbird is a film that doesn’t know if it wants to provoke sensitive viewers or present them with an alternate vision of the future, never settling on a tone until the final ten minutes of the picture. The only real intensity to be found in Songbird will come straight from viewers’ thoughts on the current state of the outside world, and never from anything that happens in the movie itself. If you think the world sucks, you’ll think Songbird sucks. If you irresponsibly think that things aren’t as bad as they seem, you’ll still think Songbird sucks. It’s a lose-lose proposition all around.

Mason can’t decide if he wants to strike close to home or give things a wide berth, resulting in a wishy-washy nature that refuses to establish even the most basic of logical continuity. The virus is airborne and omnipresent by this point, but the chances of non-immune characters wearing masks outside is roughly 50/50. “Munis,” the derogatory term used to describe the immune, lead solitary lives, free of human contact because they are “literally covered in COVID,” so what’s the point of Nico – or anyone else for that matter in a similar situation – taking a bare-assed open air shower? Is there any life outside of Southern California, or is this one of those Escape from L.A. situations? If no one can leave their homes, why is Nico only carrying one or two lightweight boxes on all of his trips? These are the questions one starts asking themselves throughout Songbird because trying to focus on the core romances, subplots, and predictable double-crosses feels like an eternity, even though it all clocks in under 85 minutes.

Apa and Carson build no chemistry together to make viewers care in the slightest about their stock romance in peril, not because they’re only talking to each other through doors, walls, and phones, but because their characters are so flimsy that it’s like watching those walls and doors trying to talk to each other. The more interesting relationship in the film – and this entire endeavour’s sole saving grace – belongs to Dozer (Paul Walter Hauser), a wheelchair bound veteran and drone expert working for Nico’s company, and May (Alexandra Daddario), a struggling singer trying to make ends meet by live streaming out of the hotel room she’s been stuck in for ages. May is secretly hooking up with Whitford’s controlling, sex crazed, irresponsible cad, which adds nothing except some sleaze, but every scene that involves interactions between Hauser and Daddario bristle with the kind of dramatic and romantic tension that Apa and Carson are lacking. Also, May is the only thing in Songbird that seems to reflect the title both literally and figuratively. Was this film at one point about May and Dozer? If that’s the case, who the hell made the lunkheaded decision to follow the far less interesting teen romance than the one that actually makes sense?

The answer to that is as simple as acknowledging why this film exists in the first place: to make money, or as this film so gleefully and ghoulishly pronounces: “rich people still need to get their shit!” Songbird is the three-card-monte of cinema: a project that suckers people in through their real life hopes and fears only to deliver something that won’t cater to either setting. Its false sense of edginess (which mostly extends to mild grime, occasional gore, and “verite” cinematography) makes Songbird feel like it was created by ineffective internet trolls who aren’t particularly good at getting a rise out of someone. It even somehow manages to waste an over-the-top performance from the always reliably nutso Peter Stormare as the city’s crooked sanitation chief. If Songbird isn’t going to be entertaining, thoughtful, or infuriating, then why make it in the first place? It’s a film that deserves it’s own special form of quarantine. 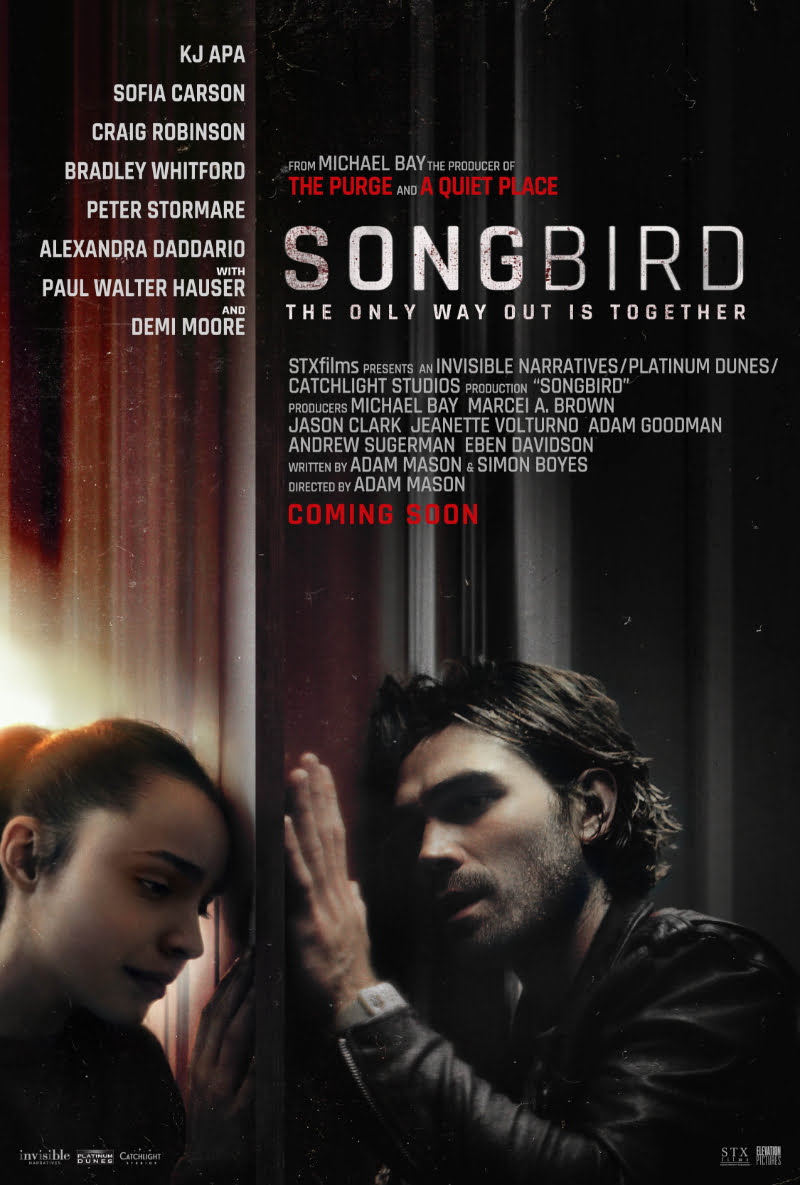 It’s better than all other Bay films!