Let me start by noting that I didn’t watch Monster Hunter, the latest video game adaptation from writer-director Paul W.S. Anderson, under optimal conditions. Setting aside also that I have no knowledge whatsoever of the Capcom video game series that the film is based on, it was clear from the opening moments that I wasn’t watching Monster Hunter as the filmmaker intended. Monster Hunter is set to open this weekend in whatever theatres are still left operating in North America (in IMAX and 3D at select locations), and it’s clear that Anderson’s intentions are for this to be seen as a gigantic, spectacle filled thrill ride. I currently reside in a location where theatres aren’t open, so my only way to review Monster Hunter was via a private online screening. As good as my television is, Monster Hunter is clearly intended to be viewed as largely and loudly as possible.

I mention all of this, dear reader, because without the accompanying bells and whistles that can sometimes add to (or detract from) theatrical experiences, I am forced to grade Monster Hunter objectively. And, objectively speaking, Monster Hunter sucks. It would probably still be just as much of a chaotic, narratively threadbare mess in a theatre, but at least under optimized conditions, I would be able to meet Anderson’s latest halfway. Instead, Anderson’s weakest film to date (the impact of that statement varying depending on one’s feelings of the director, who’s heralded as both saint and sinner by many) can’t even be bothered to deliver the most basic of cinematic and thematic requirements to warrant being called a movie. Some critics like to call action epics like Monster Hunter “thrill rides,” but here that statement is as true as it is meaningless and hollow. It’s a film that shows up, throws a bunch of rapidly edited action scenes in the viewers face, and then leaves no lasting or memorable impact whatsoever.

Anderson’s wife and closest collaborator Milla Jovovich stars as Artemis, a U.S. army ranger patrolling a desert somewhere in the world who suddenly finds her unit sucked through some sort of portal or gateway to another world while passing through a storm system. It’s clear that others from their world have been to this alternate dimension, and things haven’t ended well for them. This strange bizarro version of the desert is home to enormous, dinosaur-like monsters that don’t take kindly to human interlopers. Artemis does what she can to survive in this brutal land on her own, and finds some help in a character known as “The Hunter” (Tony Jaa), a battle hardened warrior unafraid to engage in combat with the creatures.

And that’s basically it for just shy of one-hundred minutes. There’s no greater plot than survival, and if viewers want to genuinely learn much about these characters, they better pay attention to flashbacks that seem to have been edited together at the speed of a strobe light or just give up altogether. There is nothing at all to Monster Hunter, and it’s almost commendable how precious little development there is to be found. There are maybe five total instances of downtime (one amusingly involving a surly, anthropomorphized cat that’s also a chef), but Monster Hunter spends most of its time careening from one lengthy action sequence into the next. If Jovovich and Jaa aren’t fighting monsters, they’re fighting each other. And since the viewer knows next to nothing about them as people, it’s impossible to care in the slightest, even though Jovovich and Jaa are comfortable, likable old hands at this sort of thing.

The cinematography is stunning, assured, and kinetic in the same ways as Anderson’s elaborately conceived action sequences are, but the setting of Monster Hunter doesn’t do the spectacle any favours. Most of Monster Hunter takes place in sparse desert lands or darkened caves, meaning no matter how great the film appears, there’s never much to actually look at. Anderson’s spastic editorial choices further drag down what could’ve been a gorgeously dumb movie. The creature designs are also top notch, whenever the editor slows down long enough for viewers to take notice. The digital effects are a mixed bag, with all of the discernable effort packed into the human versus monster showdowns. Bits involving flying pirate ships, menacing storm systems, rotting monster bones, and anything to do with fire look unfathomably cheap and unconvincing in comparison to the film’s bread and butter.

Had I actually been playing a video game, this lack of anything close to plot, development, character, or sense would be excusable. I get it. Sometimes you just want to smash a bunch of shit together. Similarly, if I was in a darkened theatre, letting the spectacle wash over me, I might’ve been amused, even if I thought the picture was a bad one. There’s part of me that thinks I could actually enjoy Monster Hunter if I viewed it under the loudest and most aggressively over-the-top circumstances possible. It would require that I overlook almost everything else about the film, but there’s primal entertainment value to be found if one looks deep enough. Whether or not fans of the games will get anything out of Monster Hunter, I honestly can’t say, but it’s hard to see anyone getting much out of this, enthusiasts or otherwise.

I am, to some degree, an Anderson apologist (ask me my thoughts on his first Resident Evil, The Three Musketeers, or Event Horizon, and you’ll get a giddy earful), but Monster Hunter is pretty hard to defend. While it does away with a lot of the overly convoluted plotting and mythologizing that afflict a lot of its under dunderheaded blockbuster brethren, Anderson leaves nothing in its place. I genuinely feel for Anderson here because Monster Hunter was clearly conceived with the theatrical experience in mind. Releasing something like Monster Hunter at a time when a large number of cinemas in North America are closed is akin to sending it out to die on an ice floe. It’s like the debate that raged over the release of Tenet this past summer, only at a time where things are worse in the world and the movie in question is a lot dumber. Does something this silly deserve better? I would argue that it does on a practical level, but that doesn’t make the film itself much better. 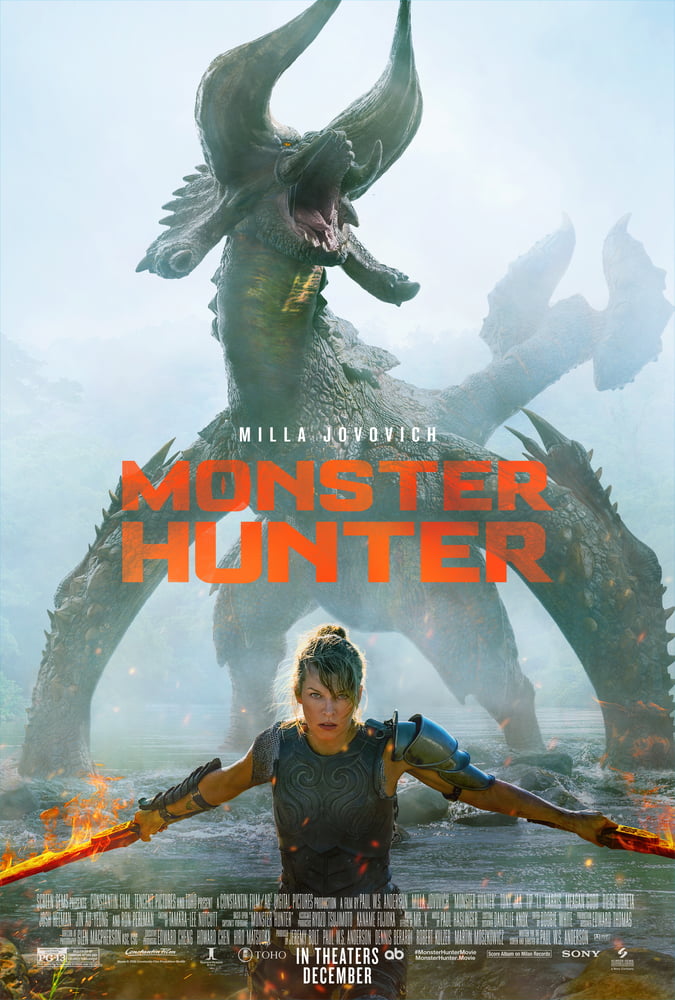