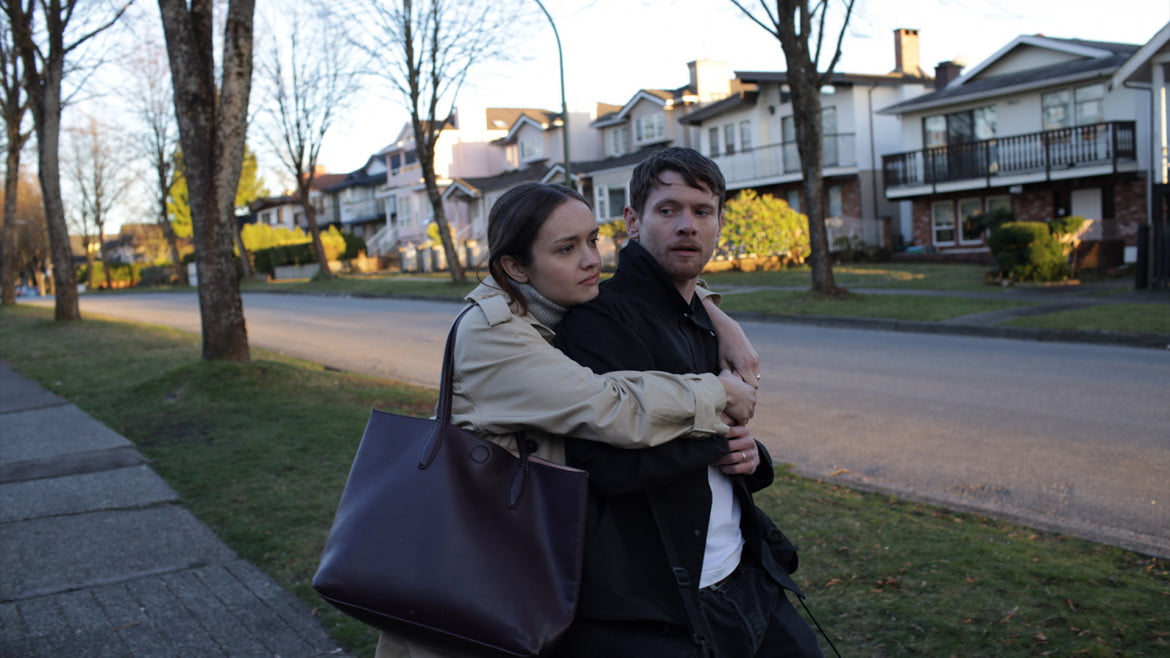 Another film that was shot pre-pandemic, but now feels like it has taken on a whole new meaning, American indie director Chad Hartigan’s fourth feature, Little Fish, is an effective, creative tale of love and loss in the time of a viral outbreak. But instead of focusing on a disease that physically debilitates someone, Little Fish revolves around something more psychologically damaging. That’s not to say that this adaptation of a short story by Aja Gabel is a thriller, but rather that it’s a different sort of tragedy.

Veterinarian Emma (Olivia Cooke) and photographer Jude (Jack O’Connell) are a happily married couple living in a frightening, troubled, not-too-distant future. A viral disease known as NIA – neuroinflammatory affliction – has been spreading rapidly, causing people to gradually lose their memory. After watching some of their friends and family members battle with the illness, things hit home directly when Emma and Jude begin to suspect that he has come down with the virus.

Screenwriter Mattson Tomlin (Project Power, Matt Reeves’ upcoming The Batman) frames Little Fish through the perspective of Emma’s inner monologues and writings, as she struggles to find ways to remind Jude of their life together (and, more likely than not, to have a record of her own memories). Tonally, Little Fish feels highly reminiscent of the works of Hartigan’s fellow indie auteur Drake Doremus (Like Crazy, Equals, Endings, Beginnings), but that constant feel of slowly mounting heartbreak is exactly what this material needs. The time hopping narrative – which weaves in and out of memories – makes it sometimes difficult to discern the film’s timeline, but that sense of confusion adds to the effectiveness of Little Fish more than it takes away. Next to losing one’s physical autonomy, losing control of the brain might be one of the scariest things to endure, and the confusion that arises from such a situation should be appropriately somber. 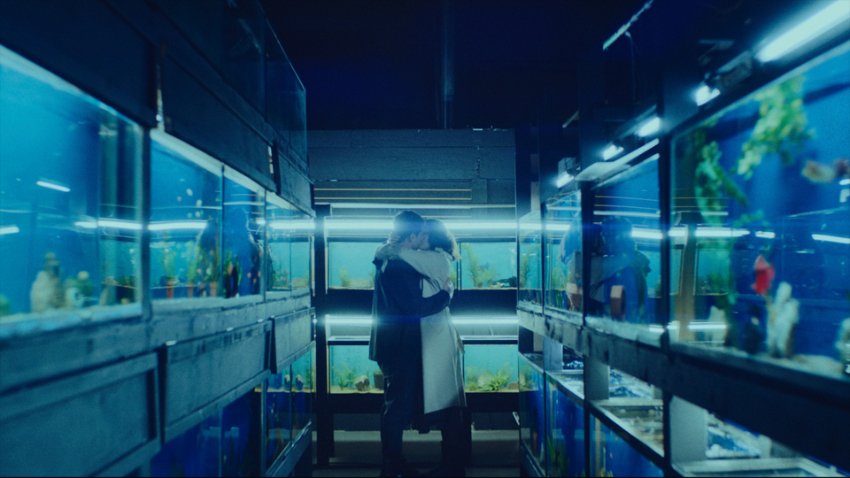 Hartigan (This is Martin Bonner, Morris from America) leans heavily into the frustration, fear, and desperation of the characters’ situation, but while this story centres around loss of self rather than certain death, it’s eerie how accurately Little Fish (which was shot last year in British Columbia) predicted how a pandemic would play out. There are lockdowns, the spreading of misinformation, desperate people clinging to the idea they can beat this thing on their own, rampant impatience as soon as a potential treatment is discovered, and an overwhelming sense that society itself is hanging on by a thin thread. But none of those sadly accurate details are of greatest interest to Hartigan. Emma sums up the overall message of Little Fish best when she says, at the peak of her frustration, “When your disaster is everyone else’s disaster, how do you grieve?”

It’s a poignant, introspective, and highly relevant question that all too few films about large scale disasters bother to tackle, and it’s up to Cooke and O’Connell to convey difficult thoughts and emotions branching off from that. O’Connell puts in some subtle, nuanced work as a man who’s trying to pretend that everything is fine inside his mind, for a variety of reasons tied to either a sense of denial or a desire to not stress his partner out more than she already is. Cooke adds another great performance to a career that’s quickly filling up with outstanding accomplishments. Cooke portrays Emma as the consummate caregiver – not only to Jude, but her mother that lives overseas and the animals entrusted to her care – but the performer is also unafraid of showing Emma as a vulnerable person who seems like she’s waiting for the next wound to open up in her heart. The chemistry between O’Connell and Cooke is solid, with each giving as much as they take. It feels like a lived in relationship, and the fear of that comfort being taken away from them is palpable. (It is a bit strange, however, that Cooke gets to use her own accent, while O’Connell has to pose as American. It’s not a terrible choice by any stretch, but rather an odd one.)

Little Fish does revolve around a twist that’s pretty easy to telegraph, but that predictability doesn’t detract from Hartigan’s emotional payoff. Outside of some cleverly designed lighting and great location choices, there isn’t a lot of style to be found in Little Fish, but what the film has is a good heart and a sci-fi plotline grounded in realistic fears, neuroses, and situations. Little Fish’s depiction of a resilient romance in a time of gloom and doom gives way to an unforced realization that life is much more than a series of random experiences. Instead of becoming a film where someone can only watch in sadness while a loved one slips away, Little Fish wants to emphasize that the time spent together is better than no time at all; a clever riff on the saying that people should live and love every day like it was their last. 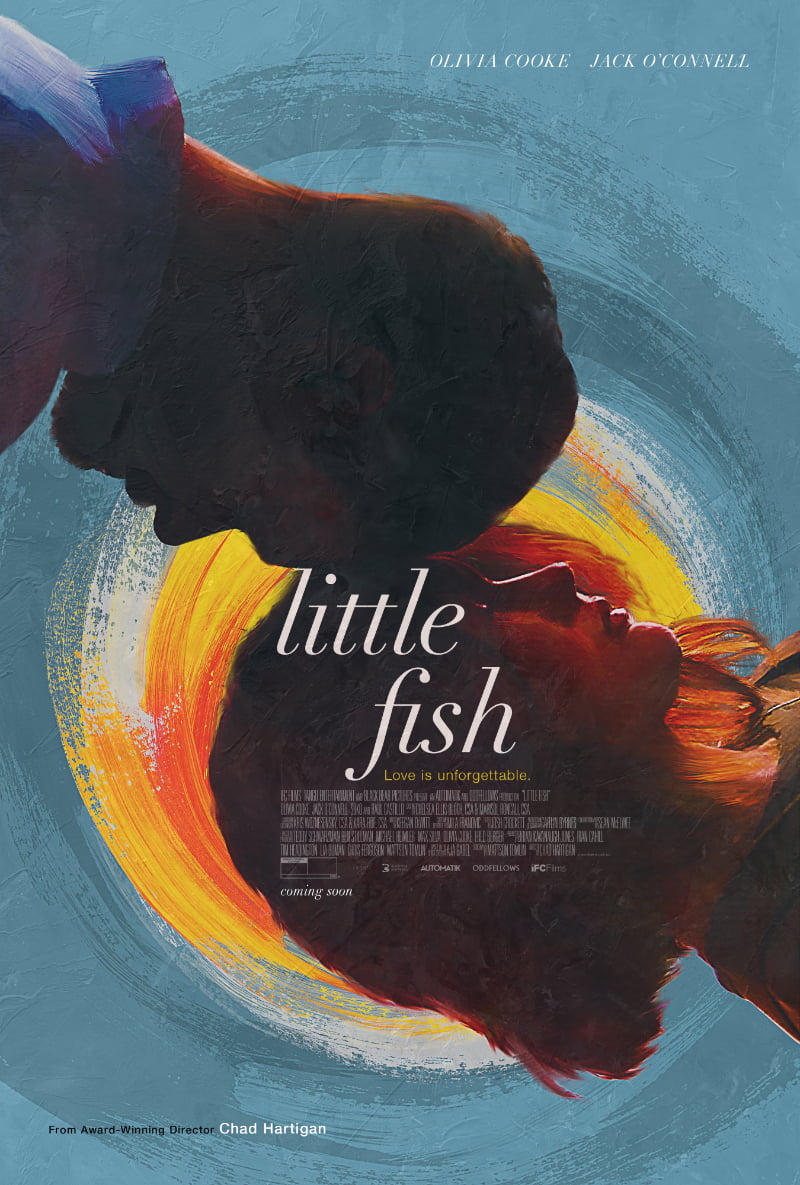