An unnerving and effective bit of religious themed horror, writer-director Rose Glass’ first feature, Saint Maud, gets under the viewer’s skin in spite of a sometimes overwhelming sense of familiarity. A story of piousness and redemption gone horrifically awry, Saint Maud is the type of film that demands closer analysis, despite not giving the viewer anything all that new or interesting to work with. In the moment, Saint Maud is an outright terror, but the impact of it doesn’t linger that long in the memory, not unlike many recent films that are trying to ride the new wave of horror. It’s solidly constructed, outstandingly performed, briskly paced, and ultimately kind of shallow.

Young professional caregiver, Maud (Morfydd Clark), has a mysterious past. It’s hinted that she has struggled with addiction and trauma in the past, and it’s clear that she has found a new path in life thanks to her unwavering Christian devotion. Maud’s latest client is Amanda (Jennifer Ehle), a 49-year old retired dancer and choreographer suffering from stage-four spinal lymphoma. Amanda – who’s described by her previous nurse as a bit of a… not so nice person – has given up on life and seems content partying and drinking herself into oblivion. Maud sees the pain and sin inside Amanda, making it her personal mission to secure the dying woman’s salvation.

One of the major problems with Saint Maud is that it’s an austere sort of horror film that doesn’t ease into making its titular character seem off, unhinged, or wounded. For a story that doesn’t want to get into specifics, Glass’ story is rather obvious thanks to the severe tone and direction. There’s little question about the darkness inside Maud and Amanda’s equally crippling depression, but all of the steps that led these characters to this point remain frustratingly vague throughout. There are hints and crumbs of information here and there, but Saint Maud never fully settles on whether it wants to paint these events as tragic, unavoidable, supernatural, or psychologically explainable. Glass also never settles on a setting for Maud, who can either be viewed as a tragic figure or someone who’s just plain crazy. The balance between drama and horror is thrown completely out of alignment due to the narrative’s wishy-washy nature. The debates about what’s truly going on in Saint Maud are the sort that have been had many times before.

Similarly, the style of Saint Maud strikes as rather run-of-the-mill by the standards of other modern horror films. There are lots of spooky noises, washed out colour palettes, extreme close-ups, portentous flashbacks, jump scares, and a leading character that seems to perpetually have voices in her head. All of these tactics – which extends to Glass grounding her story as a crisis of faith – are horror movie cliches by this point. But the best part about employing cliches is that they work 100% of the time when deftly employed, and that’s where Glass excels the most. Every frame of Saint Maud is gorgeous to look at, even when things turn nasty and gross. While the story and characters could make some scratch their heads in bewilderment, Saint Maud remains a thoughtfully constructed scare-fest on a technical level. The substance leaves something to be desired, but Saint Maud is a phenomenal piece of direction.

The presence of Clark and Ehle also help things exponentially. There’s a profound, but subtle flirtation between the leads that’s well played by both, emerging as the most thematically rich bit of pontificating Glass offers between Saint Maud’s squiggly margins. Clark fully embraces the darkness at the heart of religious zealotry here, and plays against how many similarly themed films might cast this character. Instead of playing Maud as a devout Christian who doesn’t understand their own shortcomings and impure thoughts, Clark doubles down on the character’s self-awareness to create a far more frightening performance. Similarly, Ehle takes a character that’s cantankerous and deceitful on the surface and imbues it with grace notes of humanity throughout. Amanda is almost as hard to like as Maud, but sympathies remain with the dying woman thanks to Ehle’s careful emotional considerations. There’s also a great performance in here from Lily Frazer, as an arrogant lover and colleague of Amanda who can immediately tell that Maud isn’t who she appears to be.

The tension mounts well throughout Saint Maud, building to a conclusion that’s genuinely shocking and powerful. But although things goes out on a high note, Saint Maud remains a well made film without much in the way of narrative balance. Glass wants viewers to draw their own conclusions about Maud as a human being, but without giving people much to go on, speculating on such matters is more frustrating than illuminating. Is Saint Maud a case of too much or too little? If I have to ask such a question – even after viewing the film three times since it premiered at TIFF in 2019 – I would assume the answer points to a filmmaker who made precisely the kind of film that made its way to the screen. That’s an admirable feat by any metric, and in that regard, I mildly recommend Saint Maud. While I have plenty of questions, there are tons of horror fans who’ll happily offer their souls up to this one.

Saint Maud is available on VOD in Canada on Friday, February 12, 2021. 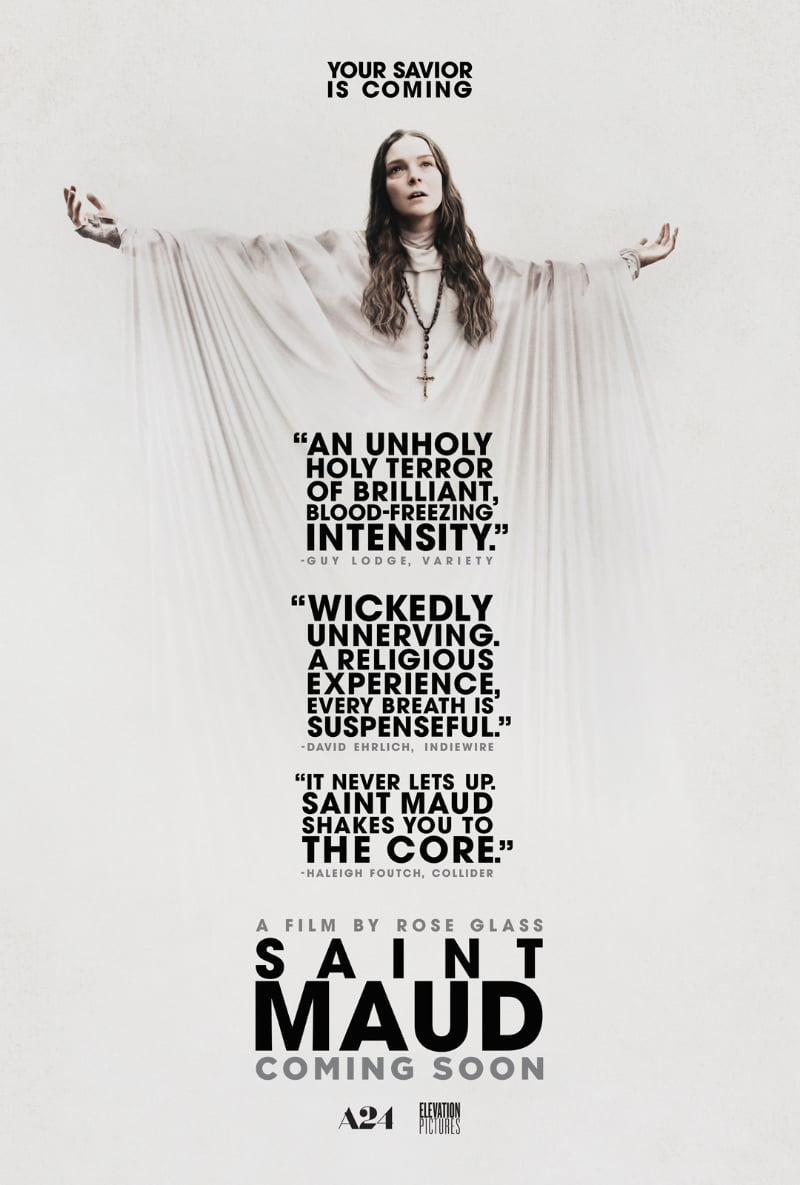