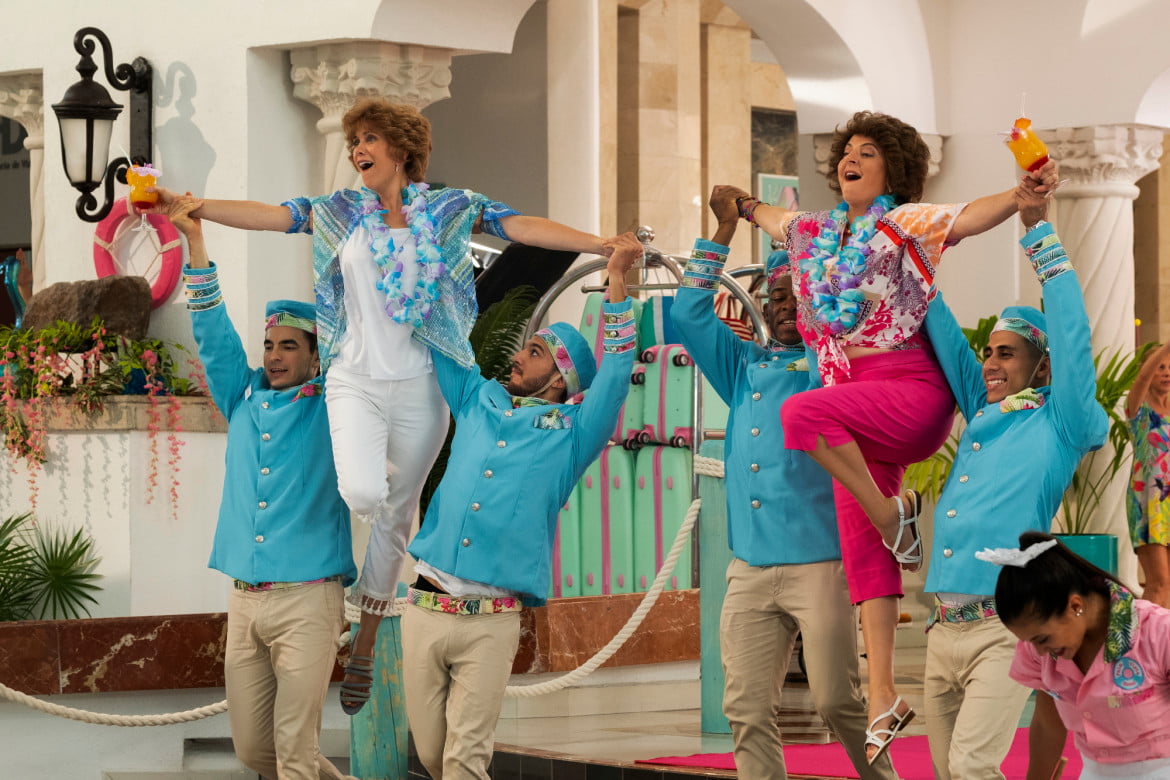 Barb and Star Go to Vista Del Mar is a gleefully silly affair in the tradition of Dumb and Dumber. It’s also a comedy where the old adage “your mileage may vary” holds a lot of weight. Firing off more jokes, sight gags, puns, and pratfalls per second than any studio produced comedy in years, Barb and Star Go to Vista Del Mar ends with about a 55 to 45 hit to miss ratio, which isn’t great, but still somewhat of a victory. And those jokes that hit are real tit-flappers.

The Bridesmaids writing team of Kristen Wiig and Annie Mumolo comes together once again – this time on screen as well as off – for a tale of two laughably sheltered, divorced, socially awkward, thick accented, middle aged nobodies from the fictional town of Soft Rock, Nebraska. Barb (Mumolo) and Star (Wiig) just lost their jobs at a sectional sofa outlet and their zest for life (or “shimmer,” as it were). When one of their townie friends (Wendi McLendon-Covey) tells them of the titular middle-aged friendly community in Florida, Barb and Star decide to hit the road for the first time in their lives. What they don’t know is that an evil supervillain (also played by Wiig in extreme make-up) with revenge on her mind has come up with a plot (involving swarms of deadly super mosquitos) to kill everyone in the coastal town. To make sure the plan goes off without a hitch, the villain sends her finest henchman, Edgar (Jamie Dornan), down to Florida to supervise. But when Edgar – who has a lovesick, unrequited crush on his boss – meets the irrepressibly chipper Barb and Star, his life is changed forever.

Barb and Star Go to Vista Del Mar is a comedic and visual wonderland, with director Josh Greenbaum (Becoming Bond) setting a gorgeously sun drenched and candy coated stage for his cast to run wild on. Barb and Star – hilariously played to the hilt by Wiig and Mumolo – are such good friends that they don’t finish each other’s sentences; instead they talk at the exact same time whenever they’re excitedly on the same page. Both Barb and Star are hopelessly naive and dumb, but they’re so full of love, vibrancy, and cheer that they’re still worth rooting for. There isn’t a single thing they do that isn’t flat out ridiculous, implausible, or sometimes even surreal, but that also makes them more interesting to watch, and the frequent bouts of nonstop riffing between the leads becomes easier to swallow. The chemistry between Wiig and Mumolo is strong enough to make one forget that Barb and Star Go to Vista Del Mar has a pretty bad plot. 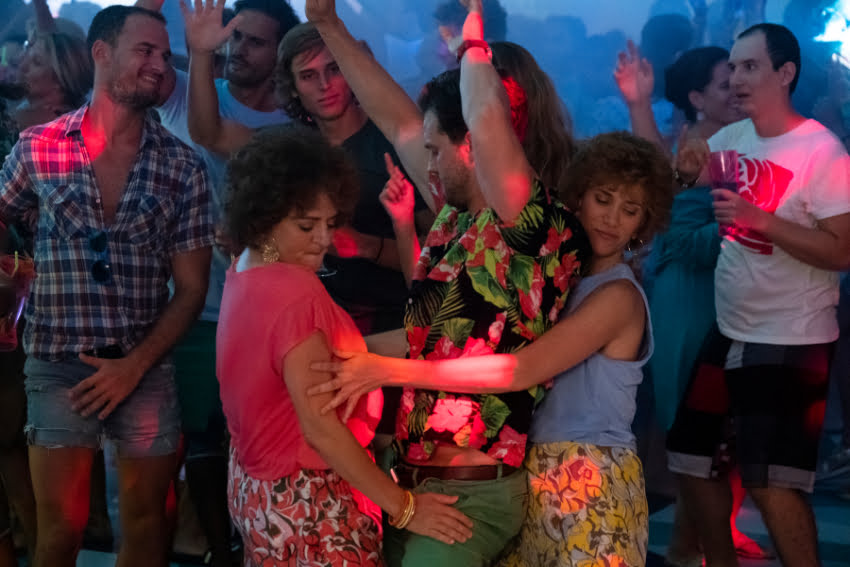 The biggest problem with Barb and Star Go to Vista Del Mar is the film’s strangest touch. Although Wiig does some of her finest and most interesting work yet as the albino-ish supervillain with a teenage, Oddjob-like sidekick (Reyn Doi), the character seems somewhat insensitive in comparison to the rest of a relatively good natured, but dirty minded comedy. It’s also the one bit of left field strangeness that doesn’t feel justified or earned. If the character were changed into a drug dealer or some other sort of criminal, Barb and Star Go to Vista Del Mar might’ve become an all time comedy classic. Instead, it feels like a solid comedy about people with far-below-average street and brain smarts that decides it also wants to be an Austin Powers rip-off. It doesn’t work at all, but it does give the film a secret weapon in the form of Dornan, who plays expertly off his leads and delivers his most impressionable and impactful performance to date.

Dornan throws himself into the several (!) bizarre musical numbers he becomes involved in, and he – like Chris Pine and Chris Hemsworth – seems like an attractive male actor who was practically made for comedy. (Seriously, the academy had better take note of his stirring rendition of “Seagulls in the Sand” for next year’s awards. And they better get him to perform it word for word.) No matter who Dornan is paired with – including Damon Wayans Jr. as a fellow spy who’s obviously terrible at his job – the results are just as magical as watching Barb and Star together. It’s expected that Wiig and Mumolo would be great as these kinds of characters, but Dornan’s performance is the sort of thing few probably would’ve guessed the actor had in him. 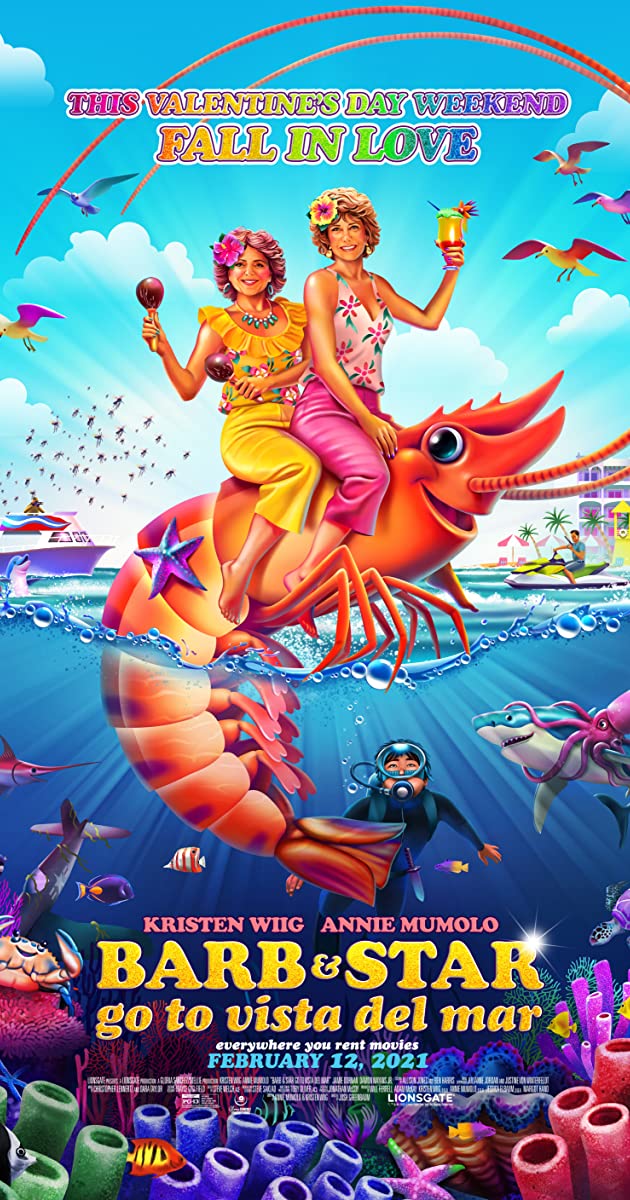