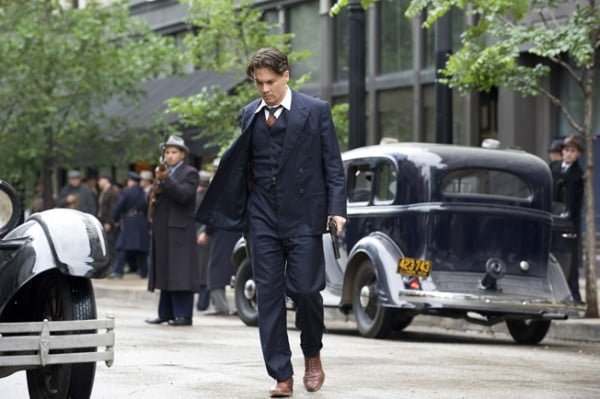 That said I have to say I did not love Public Enemies the way I had hoped I would. The script is really good, Mann’s staging of the events, many quite loyal to historical fact, is top notch as always. Depp as Depression era desperado John Dillinger is very good. Bale as G-man Melvin Purvis is one-note, but good. Billy Crudup as J. Edgar Hoover is good. Stephen Graham as Baby Face Nelson is very good. But the one thing that bothered me – and kept bothering me throughout was the way the movie looked.

I was expecting a lush, richly photographed film like Mann’s Last of the Mohicans or Thief, or even Ali or Heat – but what I was watching was a film that more looked like Collateral. The digital video cinematography was obvious throughout – too much of it was shot hand-held – and that kind of robbed us of the detail that Mann and his crew obviously went through a lot of work to achieve. The costumes, the locations, the buildings, the cars, the guns – all look authentic. The music is great – but the visual attack that Mann took really distanced the movie for me.

I argued with someone who maintained that Depp was too pretty to play Dillinger – nonsense – Depp is an actor of the calibre that his deep and obviously extensively researched performance actually makes you end up thinking that Dillinger looked like him, not the other way around. And Warren Beatty was a hundred times better looking than Clyde Barrow – his Bonnie and Clyde is a recognized classic.

John Dillinger has been portrayed on film in a starring role at least five times and viturally all of them, as is the case with Public Enemies, focus on the eight furious weeks of crime and punishment that followed Dillingers release from a nine year prison term. Public Enemies, in my opinion, ties for the best of the the bunch with the 1973 John Milius written and directed film called Dillinger. In that film Warren Oates playes Dillinger without nearly the pathos that Depp infuses him with (although Oates actually looks like the real John Dillinger’s twin brother).

Public Enemies is a solid movie made by a group of very talented people all at or near the top of their game. I just wished it looked as good as the sum of its parts.